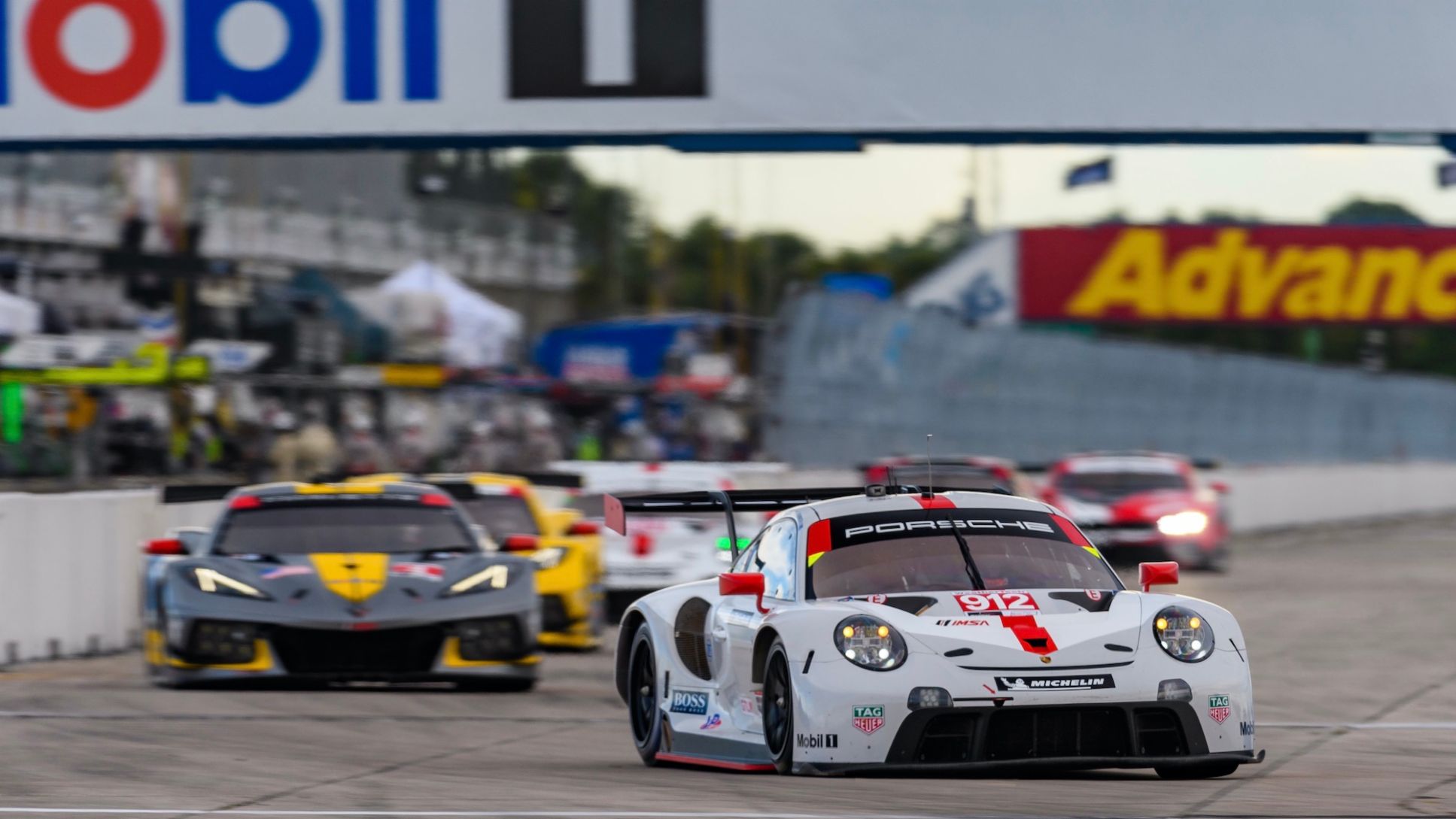 Porsche continues its streak of podium results at round three of the IMSA WeatherTech SportsCar Championship. Factory drivers Laurens Vanthoor from Belgium and New Zealander Earl Bamber achieved third place with the No. 912 Porsche 911 RSR at the Sebring International Raceway.

The No. 911 sister car driven by Britain’s Nick Tandy and Frenchman Frédéric Makowiecki took the flag in the fiercely-contested GTLM class in sixth place. Porsche has advanced up the manufacturers’ rankings to second place.

Vanthoor made a catapult start to the race over two hours and 40 minutes: Starting from fourth on the grid, the defending champion of the North American sports car series swept into the GTLM-class lead after just half a lap. The Belgian defended his top spot until the first pit stop. Unluckily, while exiting the pit lane, both Porsche 911 RSR collided. A total of four cars were involved in the incident. Tandy in the No. 911 vehicle suddenly had to dodge two Corvettes, Vanthoor made contact with the sister car, which resulted in the front apron tearing off.

Two repair stops and a drive-through penalty cost the No. 912 car around 20 seconds. The No. 911 racer lost one lap due to a puncture. Thanks to a perfect strategy, daring overtaking manoeuvres and the fastest stints of all GTLM vehicles, Bamber and Vanthoor ultimately reached the podium. For Tandy and Makowiecki, more than sixth place was not possible.

In the GTD class for vehicles complying with the FIA GT3 regulations, the entry fielded by the Wright Motorsports customer squad was also hampered by an incident. At first, the American Ryan Hardwick battled his way up the order from fourth place at the wheel of the Porsche 911 GT3 R, only to crash into the concrete barriers. After extensive repairs to the rear of the customer sports car from Weissach, there was little that works driver Patrick Long (USA) could do. The No. 16 vehicle crossed the finish line in ninth place.

Advancing to second in the manufacturer’s classification, Porsche sits just four points off the lead. The reigning driver champions Bamber and Vanthoor now rank second as they head to round four at Road America on 2 August, with their brand colleagues Makowiecki and Tandy on fourth.

Steffen Höllwarth (Head of Operations IMSA Championship): “It’s a disappointing result. Our race pace was very good, but unfortunately, several things went awry in the pit lane incident. In such situations, it’s about tenths of seconds and positions. While pulling out of the pits, three vehicles made contact, and unfortunately two of them were ours. It was our fault. We’ll analyse it and make sure it doesn’t happen again. But ultimately, at least one car finished on the podium. These points were very important for the championship.”

Nick Tandy (Porsche 911 RSR #911): “Porsche deserved a better result today. Our car was definitely capable of winning. Sometimes things happen in motor racing that aren’t perfect. We have to learn from it and make sure it doesn’t happen again. We lost a lot of points today, but we’ll regard our strong pace as a very positive sign and take it with us to the upcoming race at Road America.”

After yielding two podium results in the GTLM class from the first two races held at America’s motor racing stronghold, Daytona, the factory squad of the sports car manufacturer is just one point off the lead with the Porsche 911 RSR. At the second race in Florida within two weeks, two works-run RSR from Weissach as well as a customer vehicle will be fielded. In the GTD class, Wright Motorsports campaigns a 911 GT3 R.

The Sebring International Raceway throws major challenges at man and machine. About one third of the 6.02-kilometre racetrack consists of old concrete slabs, which were previously part of the runway at the former Hendricks Army Airfield. These washboard-like sections of the track cause hefty vibrations. Due to this special feature, the racetrack about 100 kilometres south of Orlando is often mentioned on social media with the hashtag #RespectTheBumps. For the engineers of the works team, the emphasis is on finding a suitable setup for the kinematics of the 911 RSR.

Porsche is the most successful manufacturer on the storied circuit, which has regularly hosted endurance races since 1950. So far, the Stuttgart marque has netted 18 outright wins and 72 class victories at Sebring. In the last two years, the Porsche 911 RSR has dominated the GTLM class at the twelve-hour race. The “Sebring 240” on 18 July is contested over just two hours and 40 minutes. The long-distance classic over twelve hours, originally scheduled for March, has been pushed to 14 November at the same venue as a season finale.

Works drivers Earl Bamber (New Zealand) and Laurens Vanthoor (Belgium) share driving duties in the No. 912 Porsche 911 RSR. The reigning GTLM-class champions have scored second place at the first two rounds of the season in Daytona and currently lead the drivers’ championship. Briton Nick Tandy and Frédéric Makowiecki from France are keen to claim their first win of the season with the No. 911 sister car. The pair concluded the 24-hour race at the end of January and the race over 2:40 hours in Daytona on 4 July in third place. In the manufacturers’ classification, Porsche currently ranks third, just one point behind the joint leaders BMW and Corvette. At round three in Sebring, the North American factory squad now aims to bring home the first IMSA win with the new Porsche 911 RSR.

In the GTD class, the seasoned customer team Wright Motorsports again fields a Porsche 911 GT3 R at the third round of the North American sports car series. The squad from the U.S. state of Ohio entrust the cockpit to works driver Patrick Long and his compatriot Ryan Hardwick. The team currently ranks fourth in the class for vehicles compliant with the GT3 regulations.

#IMSA - It's race week! Our two #Porsche #911RSR will be back on track for round 3 of the 2020 @IMSA season next Saturday @sebringraceway pic.twitter.com/HijIGtZz36

Comments prior to the race

Pascal Zurlinden (Director Factory Motorsport): “We claimed podium spots at the first two races in Daytona and by now we’re the only manufacturer to finish on the podium at all races. The 2020 season has started very well. Now there’s just one thing missing: We want to achieve the first win in the USA for the 2019-spec Porsche 911 RSR. Our factory squad in North America did an exceptional job under difficult conditions recently. I’m sure that our team will put in another strong performance at Sebring. I’m particularly pleased that the IMSA management and the local authorities have managed to make real motor racing possible again with a well thought-out health-protection concept. A huge thank you to all involved.”

Steffen Höllwarth (Head of Operations IMSA Championship): “The IMSA races now come in quick succession. After the successful Daytona events, we’re travelling to our next mission in Sebring feeling very good. We’ve won the twelve-hour race on this track in the past two years. However, the weather conditions were different because the long-distance classic was contested in the cooler month of March. Like at Daytona recently, we have to be prepared for heat and thunderstorms at the Sebring Sebring International Raceway. Due to the compact weekend programme, it’ll be important to sort ourselves out in the first free practice. There’s barely any time for detailed analyses or extensive setup changes. If you’re fast from the get-go, you have the best chance of beating the tough competition in the GTLM class.”

Further comments prior to the race you can find in the press release.

Round three of the IMSA WeatherTech SportsCar Championship at Sebring takes off on Saturday, 18 July, at 5:35 p.m. local time (11:35 p.m. CEST). The race over 2:40 hours can be viewed outside the USA and Canada on www.imsa.com.

The new Porsche 911 RSR (2019 model year) celebrated its debut in the IMSA SportsCar Championship at the 24 Hours of Daytona. The vehicle from Weissach is based on the high-performance 911 GT3 RS road-going sports car. Compared to its extremely successful predecessor model, the car received improvements, most notably to areas such as driveability, efficiency, ergonomics and serviceability. About 95 percent of all components are new. The 911 RSR is powered by a 4.2-litre, six-cylinder boxer engine.

The IMSA SportsCar Championship was founded in the USA and Canada in 2013 after the merger of the American Le Mans Series and the Grand-Am Series. A year later the new sports car race series, which is organised by the International Motor Sports Association (IMSA), was contested for the first time. Sports prototypes and sports cars start in four different classes: GTLM (GT Le Mans), GTD (GT Daytona), Dpi (Daytona Prototype international) and LMP2 (Le Mans Prototype 2). The new Porsche 911 RSR is fielded in the GTLM class, and the Porsche 911 GT3 R contests the GTD class. The Porsche GT Team tackles the 2020 season in North America as the title defenders in the manufacturers’, drivers’ and team classifications. 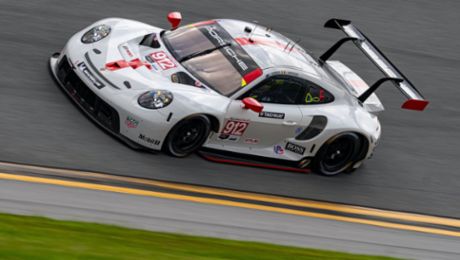 Porsche has again finished on the podium with both 911 RSR at round two of the IMSA WeatherTech SportsCar Championship.

The new 911 RSR celebrated a successful North American debut with a double podium at the 24 Hours of Daytona. 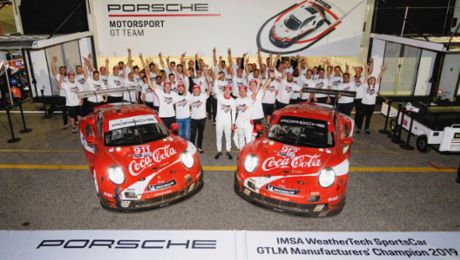 The Porsche GT Team concluded the season by winning the manufacturer, driver and team titles. 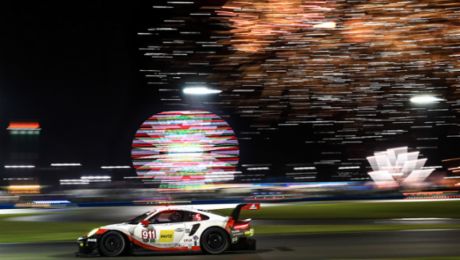 Fuel consumption / Emissions
Fuel consumption combined 13.2 l/100 km
CO2 emissions combined 303 g/km
Porsche uses cookies to optimise and improve the website, as well as enable the availability of certain functions. By continuing to use this website, you agree to our use of cookies. For further information, please click  here