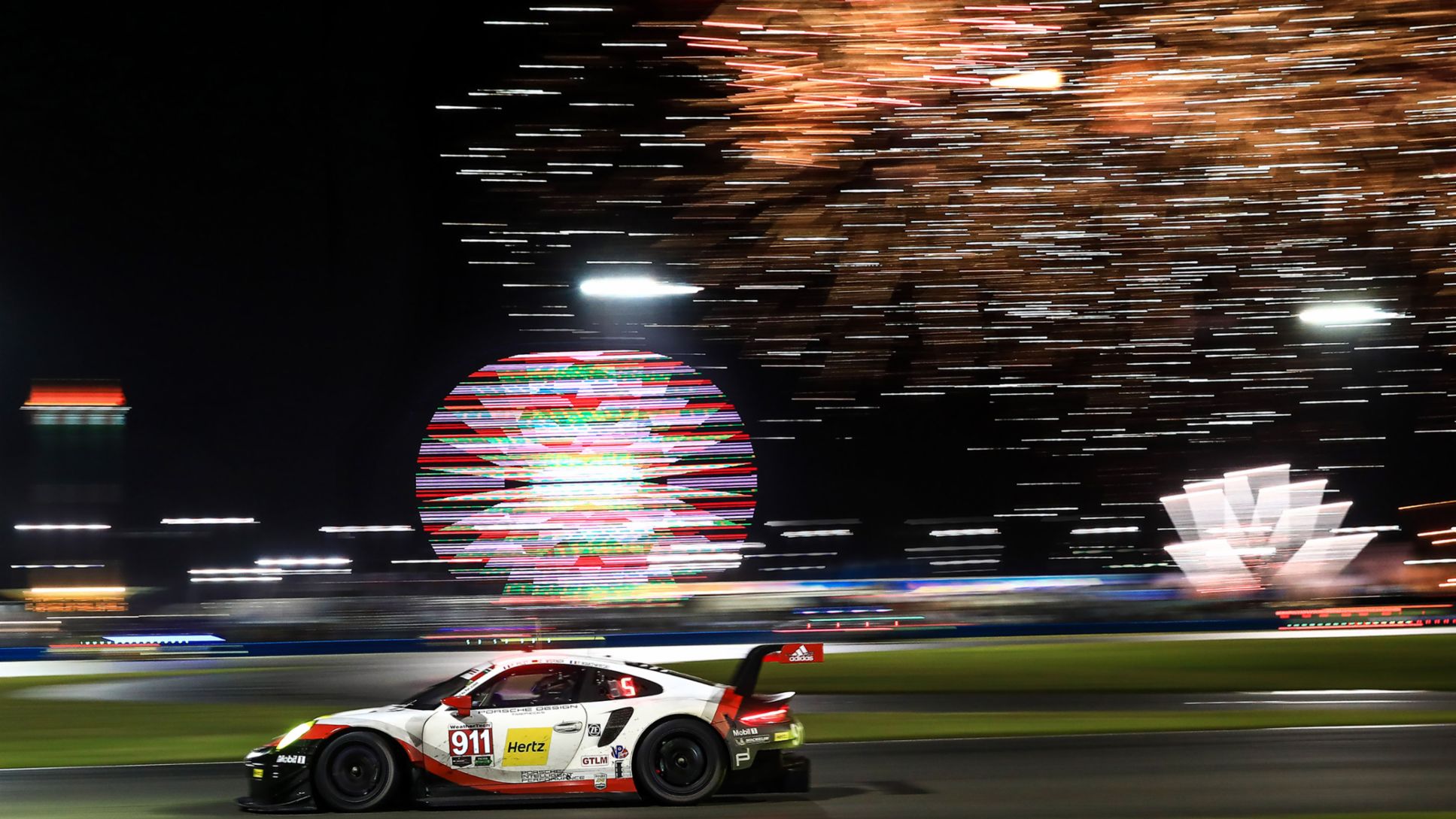 Thirteen wins, 34 podium finishes, titles in the FIA World Endurance Championship and the IMSA WeatherTech SportsCar Series as well as victories from the great classics at Le Mans, Sebring and Road Atlanta – this is the impressive résumé of the Porsche 911 RSR (2017) after its 50th and final factory campaign.

The circa 510 hp racer complying with GTE regulations (USA: GTLM) goes down in Porsche Motorsport history as one of the most successful cars. Its successor is already waiting in the wings and will line up on the grid for the first time in North America from January 2020.

Concept change as a basis for great success

When Porsche presents the 911 RSR, which is based on the high-performance 911 GT3 RS* road-going sports car, in autumn 2016 at the Los Angeles Auto Show, motor racing insiders are amazed. The Stuttgart sports car manufacturer unveils an uncompromising racing vehicle, and veers away from the traditional rear-engine concept. “Positioning the engine in front of the rear axle created space for the crucial rear diffuser. At the same time, weight distribution could be improved. These factors not only made the car faster, they also helped optimise tyre wear,” explains Pascal Zurlinden, Director Factory Motorsport. “The new concept was courageous, but it absolutely paid off,” says Fritz Enzinger, Vice President Porsche Motorsport.

The Porsche 911 RSR in the world championship: Wins and titles

Even in its 2017 debut season, the huge potential of the Porsche 911 RSR is evident. From the nine races of the FIA WEC season, the factory drivers helming the number 91 and 92 vehicles secure nine podium finishes. Austria’s Richard Lietz and his French teammate Frédéric Makowiecki conclude the season as runners-up of the drivers’ championship, narrowly missing out on taking home the title by just eight points. In the “Super Season” of the 2018/2019 FIA WEC, the Porsche 911 RSR goes on to make its mark.

After scoring a podium result at the season-opening round at Spa-Francorchamps (Belgium), Porsche tackles the 24 Hours of Le Mans in 2018 with the largest GT factory campaign in the company’s history. Four factory cars contest the classic in France, two of them decked out in historic designs. The cars in the Rothmans look of the 1980s (No. 91) and the Pink Pig livery (No. 92) immediately capture the hearts of fans. These two vehicles dominate the action on the track. With a time of 3:47.504 minutes, Gianmaria Bruni (Italy) sets an impressive new record for GTE vehicles in the number 91 car during qualifying. In the race, the sister car comes out on top. Michael Christensen (Denmark), Kevin Estre (France) and Laurens Vanthoor (Belgium) win ahead of their works driver colleagues Lietz, Bruni and Makowiecki. Thanks to the Le Mans triumph, Porsche moves into the lead of all GT classifications and remains there. On the way to claiming the world championship, the Porsche 911 RSR also wins the six-hour race at Fuji (Japan) and the 1,000-mile event at Sebring (USA).

On 28/29 January 2017, the then brand new Porsche 911 RSR faces its rivals for the first time. The race premiere – the 24 Hours of Daytona – is a tough test, but the 911 RSR passes with flying colours. The ca. 510 hp vehicle runs with the front pack over the entire distance. Patrick Pilet (France), Dirk Werner (Germany) and Makowiecki cross the finish line in second place after 24 hours a mere 2.988 seconds behind the winner. It becomes obvious to all: The Porsche 911 RSR is a serious contender for the title. In July 2017, the driver crews Pilet/Werner and Vanthoor/Bruni underscore this with a one-two at Lime Rock (USA) and by winning the North America Endurance Cup.

Victories follow in the 2018 season at the great classics of Sebring and at Road Atlanta (Petit Le Mans) as well as at the sprint event in Mid-Ohio. These successes clearly show that the Porsche 911 RSR is now ready to clinch championships. And this is exactly what happens in 2019. Over the season, Porsche yields six wins in the fiercely competitive GTLM class, including victories at the long-distance classics of Watkins Glen and Sebring, as well as at the spectacular sprint through the streets of Long Beach just outside Los Angeles. The Porsche GT Team celebrates five straight victories – setting a new record in the GTLM category.

The icing on the cake of a highly successful season comes at Petit Le Mans in October 2019, at the final outing for the winning 911 RSR racer decked out in the historic colours of the giant beverage company Coca-Cola. Achieving positions five and six, Porsche clearly secures the manufacturer and team championships. Earl Bamber (New Zealand) and Laurens Vanthoor beat their works driver colleagues Patrick Pilet and Nick Tandy (Great Britain) in the duel for the drivers’ championship. The impressive overall balance of the Porsche 911 RSR in the North American sports car series: ten wins and 15 podium results from 33 races.