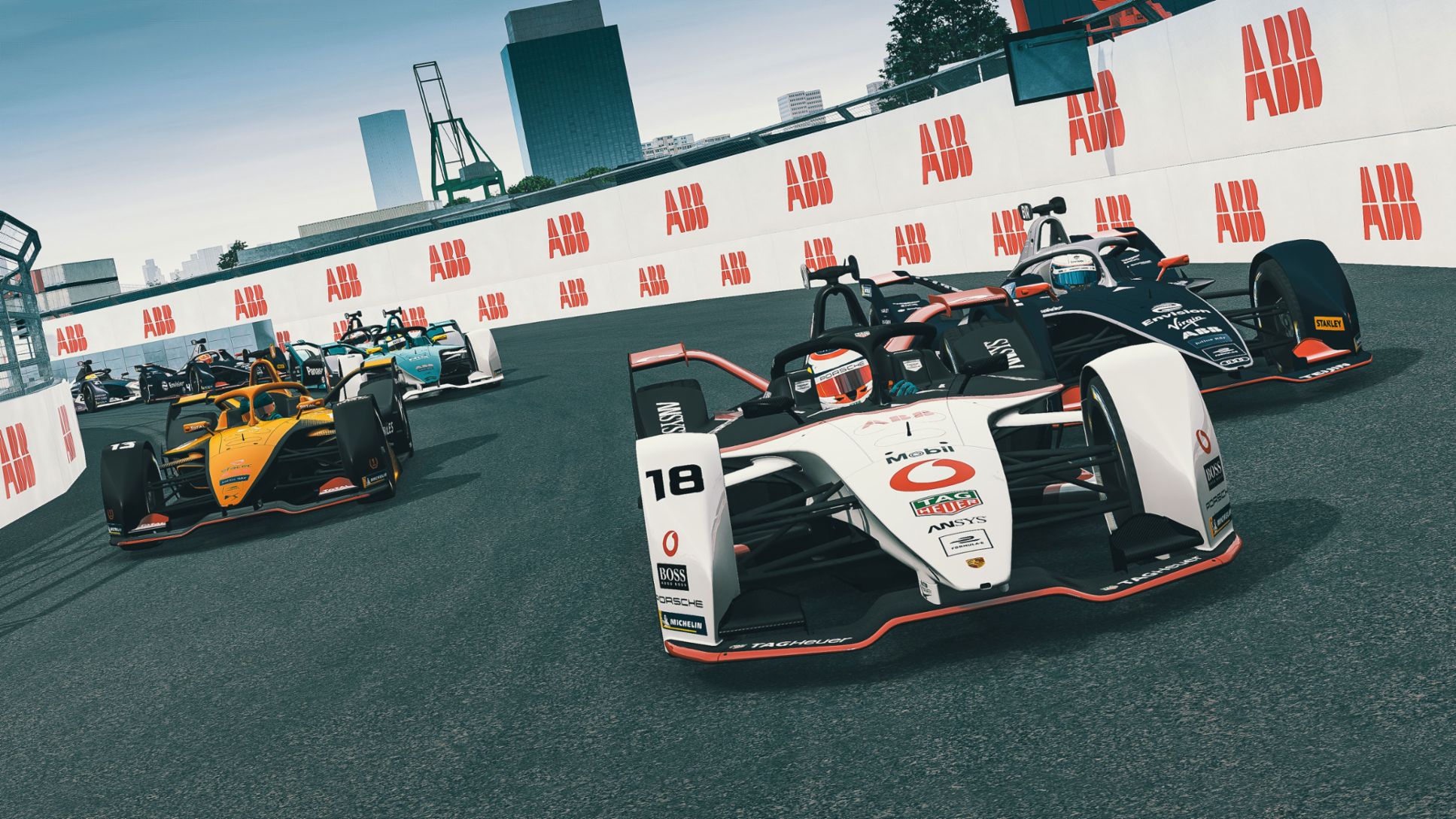 The Grand Final weekend is underway in the ABB Formula E “Race at Home Challenge”. On Saturday, the drivers from the TAG Heuer Porsche Formula E Team were competing on the virtual circuit in New York. Neel Jani finished the seventh race of the season in eleventh place, just missing out on the points.

After an accident, André Lotterer (DE) had to be content with 18th position. Sim racer Joshua Rogers (AU) had reason to celebrate after claiming third place in the “Challenge Grid” race to reach the podium for the fourth time. The Grand Final of the “Race at Home Challenge” takes place on Sunday in Berlin (DE). The top ten Formula E drivers in the “Driver Grid” will then have the opportunity to score double points.

Neel Jani struck a consistently good pace throughout the entire race, however he was overtaken by two other cars three laps before the end, dropping out of the points. Jani is the best-placed Porsche representative in the drivers’ standings in sixth place with 35 points. Jani’s team-mate André Lotterer crossed the line in 18th place in the second Porsche 99X Electric, having lost positions due to an accident. He had reached 12th place in qualifying. In the team standings, the TAG Heuer Porsche Formula E Team remains in sixth place with 48 points.

After reaching third place in qualifying, Joshua Rogers gave another strong performance in his fourth race for the TAG Heuer Porsche Formula E Team. The Australian driver crossed the finish line in third position. His overall record for this season is impressive, with one win, one second place and two third-place results. In the start phase, Rogers overcame involuntary contact with other cars to defend his position and then delivered a consistent race performance. Marius Golombeck (DE) finished eighth in the second digital Porsche 99X Electric in the “Challenge Grid”, celebrating a second top ten finish in his third race of the season.

Rogers is fifth in the drivers’ standings with 75 points, and will therefore start Sunday’s final race in Berlin from fifth position. There will be no separate qualifying session for this last race in the “Challenge Grid”. The grid positions are based on the championship standings after the seventh race.

That’s it. 🏁 Here is the provisional result of Round 7 of the #RaceAtHome Challenge. 👇

Marco Ujhasi (Manager Esports at Porsche Motorsport): “The ‘Race at Home Challenge’ is now entering the home stretch. Neel and André were out of luck in New York, finishing the penultimate race empty-handed. André had an accident early on. Neel was doing well to start with before his car suffered damage in some battles and he dropped out of the top ten. We had two drivers in the points among the sim racers. Josh reached the podium once again in his fourth ‘Challenge Grid’ race. His consistency is very impressive. Marius also gave a good performance in eighth place. The Grand Final will take place tomorrow in Berlin. We will give our all as we aim to round off the season with a good result in both categories.”

Neel Jani (Porsche 99X Electric, #18): “Qualifying went fine for me. The grid penalty imposed after the last race meant that I started from tenth place. I was able to move up two places in the early phase, however my car was damaged in battles as the race progressed. I then fell back and finished outside the top ten. Double points are on offer tomorrow in the final race, which provides plenty of motivation.”

André Lotterer (Porsche 99X Electric, #36): “The start went well and I was in a good position but then I was involved in an accident. Suddenly, I was just a passenger. My car was severely damaged and I lost a few positions. The final will take place tomorrow in Berlin. The ‘Race at Home Challenge’ has been pretty cool. I hope I can finish with a good result tomorrow before we get back to the real racing hopefully soon.”

Joshua Rogers (Porsche 99X Electric, #18): “My race was really uneventful this time. I did well in qualifying and finished third, however it was not a perfect lap. I managed to edge closer to the car in second place during the race but lost touch after making minor errors. I did have some chances to attack but I wanted to make sure of the points and claim a good grid position for tomorrow. Now I am looking forward to the final race of the ‘Race at Home Challenge’ in Berlin.”

Since the end of April, virtual races of the ABB Formula E “Race at Home Challenge” were held on a weekly basis every Saturday as a replacement for the standard races in the ABB FIA Formula E Championship 2019/2020, which have been postponed due to the current crisis. The Grand Final will be in Berlin. The series sees all drivers in the regular championship do battle for virtual points in racing simulators. The races are held on the realistic rFactor2 simulation platform. Sim racers and influencers also go head to head in separate races to the Formula E drivers. With the “Race at Home Challenge”, the ABB FIA Formula E Championship is supporting the child welfare organisation UNICEF, which will be receiving donations raised during the race events.

The TAG Heuer Porsche Formula E Team has scored critical points as it heads into the second half of the season.

At the wheel of his Porsche 99X Electric, André Lotterer earned important championship points again at the Berlin E-Prix.