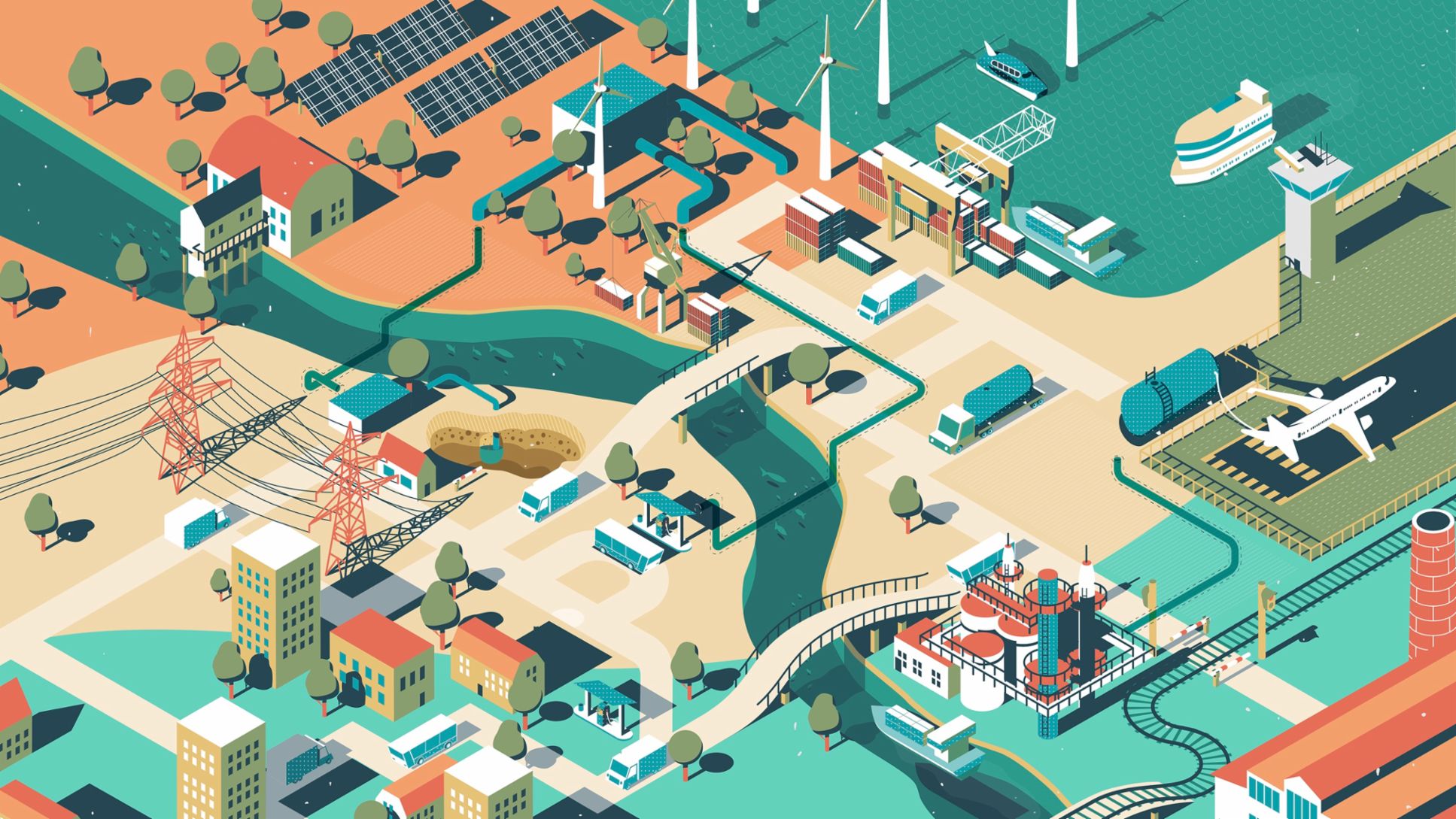 Hydrogen – Fuel of the Future?

Expectations are high and the technologies are proven—is the hydrogen economy about to take off? The players still need to network and to establish their business models.

Fast-forward to the year 2030. The coronavirus pandemic is history and the economy has recovered but many things have changed. For one, the focus is now on sustainability. And the chemical element with atomic number 1—hydrogen—has a set place in the energy mix of many countries in Europe, the Americas, and Asia. It features prominently in transport, industry, and building services, and plays indispensable roles in storage systems for green energy and as a clean fuel for public transportation. The technology was long in coming, with H2 only beginning its triumphal march a decade ago.

Back to the present. The signs are increasing that this vision is becoming reality. In 2020, the European Union and Germany presented their hydrogen road maps along with funding for the coming decade. And the number of use cases for efficient hydrogen energy is increasing, particularly in industry and transport.

So what is still missing? What needs to happen to facilitate the final and sustainable breakthrough for the use of hydrogen? One answer to this question lies in linking the key players, which means everyone from the production, storage, and distribution sectors to manufacturers of hydrogen-powered vehicles and plants as well as commercial and private users. At the same time, a uniform and transparent price policy is still lacking, such as a central market as exists for electrical power. And on the technical side, the “green“ percentage of this fuel source—the amount produced via electrolysis with renewable energy—needs to increase.

When these conditions are met, hydrogen can become widely established as a source of power for applications like fuel-cell heating systems and commercial vehicle drives. The chemical industry would find dependable customers for the substance, which often arises as a product of reactions. And by switching their blast furnaces from coal to hydrogen power, steel producers could substantially lower their costs and also reduce their environmental impact thanks to lower CO2 emissions.

Japan can serve as a model for putting hydrogen strategies into practice. In 2017, it set itself the goal of establishing a global supply and customer chain—with 800,000 fuel-cell cars, 1,200 buses, and 10,000 fork-lift trucks in Japan alone. Utility systems in some buildings have already switched over. Since 2009, around 300,000 hydrogen-based micro-CHP units have been installed, with this number expected to exceed five million by the year 2030. They provide heat and power not only for households but also for konbini, the popular convenience stores open around the clock. Their constant need for heat and power makes them an ideal use case for fuel cells.

The example of Japan shows that a hydrogen economy has the potential to produce energy on a sustainable basis and meet CO2 emissions targets. It could also encourage many branches of industry to develop, install, and export the components of this new technology. According to a recent study by the Mechanical Engineering Industry Association (VDMA), a potential market of more than €300 billion a year could arise for the worldwide mechanical and plant engineering sector if companies target green technologies in their development work. That corresponds to 12–15 percent of the sector’s sales worldwide—or the current total level of sales in Germany’s mechanical and plant engineering sector. The study notes that innovations that facilitate the use of hydrogen have a very high level of potential.

The advantages of hydrogen have long been known. This source of energy is available primarily from chemical production sites; neither its storage nor distribution poses major obstacles, and its “consumers“ such as fuel cells and adapted combustion engines are also tried and tested. Although hydrogen cycles have been under discussion for more than twenty years now, they simply have yet to gain momentum.

The current situation, however, looks primed and ready. According to Christian Dittmer-Peters, a partner at Porsche Consulting, “There are three crucial factors: transparency on matters like the sources and available amounts of hydrogen, clear regulations on processes like handling gases, and—most importantly—a network for all the relevant players. Hydrogen can only be used on a widespread basis if a network can be established with appropriate business models. That includes not only the infrastructure and technical equipment but also completely new services.”

This is precisely the sticking point. Dittmer-Peters describes the current constellation as a standoff in which each member of the process chain is waiting for everyone else to make a move. “What’s needed right now is investment in hydrogen production and distribution, as well as in fuel stations and distribution centers. A lot of companies are ready. In order for participants to commit themselves and move forward, they have to connect with each other and develop viable long-term business models.”

Here, too, the chances for this development are now more favorable than ever. “There is an enormous amount of potential because of the many gaps in the value chain that still need to be filled,” explains Dittmer-Peters. For companies that are already established in today’s energy mix, such as those in the petrochemical industry, it is entirely unclear what roles they will be playing in the future. Will they be producers, or suppliers, or perhaps primarily consumers? And what new partners or competitors will enter the picture?

A very wide range of players is currently investing in concrete applications for hydrogen. Duisport, for example, is Germany’s largest inland port and Europe’s central logistics hub. Located at the Rhine, for the Duisburg port hydrogen is an important part of its sustainability strategy, which is why it is participating in the RH2INE joint venture (Rhine Hydrogen Integration Network of Excellence). “This project aims to introduce hydrogen-powered barges on the Rhine-Alpine corridor and set up a hydrogen infrastructure at ports along the Rhine by 2030,” says Erich Staake, Duisport’s CEO. The EU is investing half a million euros in studying the technological and regulatory requirements for hydrogen-powered shipping between Rotterdam and Genoa.

A joint project by Thyssenkrupp Steel Europe and the RWE power company is similarly ambitious. RWE is planning to build an electrolyzer at its Lingen plant in northwestern Germany to produce green hydrogen. Thyssenkrupp, which is Germany’s largest steel producer, will be one of the consumers. It plans to use hydrogen to produce crude iron at its site in Duisburg. The 100-megawatt electrolyzer will be able to produce 1.7 tons of hydrogen an hour. That means Thyssenkrupp Steel will be able to produce 50,000 tons of climate-neutral steel a year and save the cost of carbon taxes. This conversion, which will represent a very significant step toward protecting the climate, is expected to take place by 2022.

The project is part of the Get H2 initiative, a joint effort by businesses and research institutes to establish a competitive hydrogen market in Germany. It started with the Lingen Project, which brought eight partners together from the energy, industry, transport, and heating sectors. “The key now is not only to use the technology in small-scale R&D projects but also to prepare it for mass production in connection with larger projects and an overall approach. We want our project to make a serious contribution here,” says Jörg Müller, CEO of Enertrag, one of the partner companies. This example illustrates the importance of linking everyone involved along the H2 value chain, notes Christian Dittmer-Peters. “When the right people from production through storage sit down at the same table with users and find a way of working together, everyone benefits.” The start has been made.

The colors of hydrogen

Is hydrogen always hydrogen? It is a colorless gas. But the way it is produced can make a difference. A color system is used for categorization. Here are the three major types:

Green: produced from water by electrolysis using renewable energy, which makes it the only CO2-neutral form.

Grey: produced from fossil fuels, which can make sense for a transitional period.

At a glance: the benefits of hydrogen

The use of hydrogen creates real win-win situations along the process chain.

Sustainability – Now More Than Ever

The Covid-19 pandemic sent shock waves through businesses and the economy. In consequence, sustainability could fade into the background—or become an even more important factor for success. 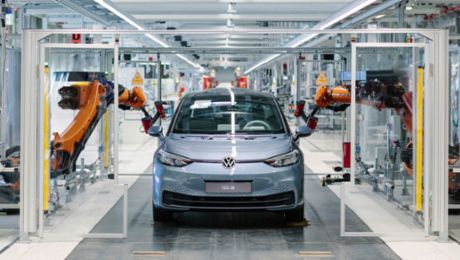 Charging Up the Car Industry

The battery market for electric vehicles is going from strength to strength. But it is still characterized by a high level of uncertainty with significant swings in demand. LG Chem is managing this volatility at its giant plant in Poland. 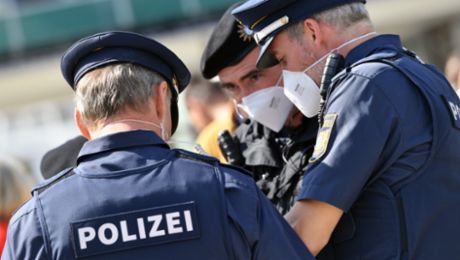