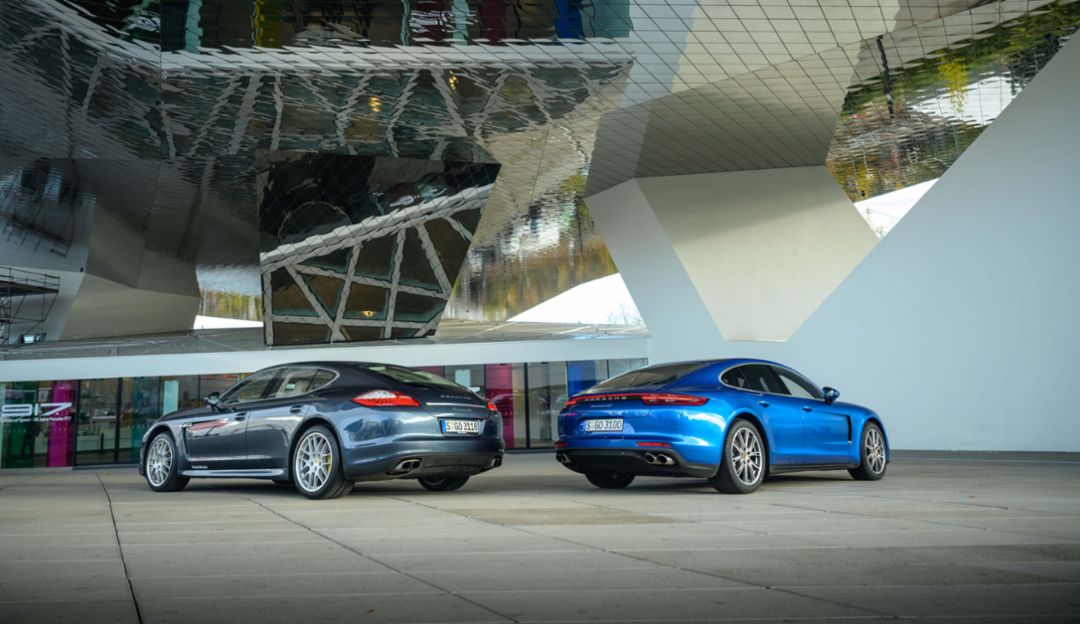 To celebrate the anniversary of the series, guest author Fabian Mechtel sent two blue Porsche Panamera 4S on a journey from the Porsche Museum in Zuffenhausen to their birthplace in Leipzig, Saxony. It's more than just a comparison, it's also a look back and forward at the same time.

The new models were an immediate hit. With the introduction of the Boxster in August 1996 and the 911 of the 996 generation that followed in the following year, Zuffenhausen had the problems of the past well under control. The use of components across all model series, significantly more modern production and pioneering technology developments formed the basis for strong growth. With the appearance of the Cayenne, Stuttgart not only exceeded the expectations of the market, but also, thanks to the overwhelming demand, its own quantity plans.

The emergence of the first generation

The engineers had a free hand when it came to planning a fourth series. The options were manifold, not only a smaller SUV below the Cayenne in the size of the later Macan was discussed, but also a compact vehicle in the C segment, which would have been comparable in size with today's Taycan. "But the decision was made relatively quickly," recalls Dr. Michael Steiner, Member of the Board of Management for Research and Development at Porsche AG and then the first head of the Panamera series. "In the end, it was to be a sporty saloon, more compact than the car to come, because the demand for chauffeur suitability was only added later in the process.”

At Porsche, the idea of a four-door and four-seater sports car wasn’t new. In the past there have already been trials and prototypes in this direction, but none of the concepts were ready for series production. The Porsche 989 had the best chances, but the "four-door" project was not only significantly more expensive than expected, the entrepreneurial risk was considered too high at the beginning of the nineties in view of the necessary sales price.

Ten years later, the time had come to start planning and developing the Panamera, the large four-seater. In contrast to the 989, the Panamera's focus from the outset was on dispensing with one-off expenses. The company had learned from the synergies of the 986 and 996 series and now wanted to transfer them to the Panamera.

The Management Board even examined the use of a corporate platform as the technical basis for the Panamera. However, there was no cooperation, as all possible limousine platforms would have been far too high and the centre of gravity of such a vehicle would not have been compatible with the driving dynamics requirements of a real Porsche. "From an entrepreneurial point of view, the decision to build his own platform was certainly a big and courageous step," recalls Dr. Gernot Döllner, who at the time was responsible for the concept and development phase of the first Panamera G1 generation and later, as head of the Panamera G2 series, also for its successor. "The V8 engine with direct gasoline injection from the large SUV was just as much a part of the electrical and electronic architecture as the V8 engine. The seats were derived from the 911 and many components in the powertrain are also derived from the siblings.

On the other hand, the team had a free hand with the design. Not least at the request of Dr. Wendelin Wiedeking, then Chairman of the Board of Management, the Panamera was to become a luxury limousine, a statement, an icon. It should show its extraordinary driving dynamics, offer generous space in the interior and be recognizable at first glance as a Porsche with its fast roof line and characteristic hatchback.

Leap into the present

It still is today. Even ten years after its debut, the Porsche Panamera of the first generation is still an extraordinary phenomenon. The flat bonnet, flanked by the two mounted mudguards, is more than just a delicate reminder of the brand's sports cars; the flat roof line and the clear, uninterrupted window line, together with the sportily shaped rear end, which ends gently without a backswing, unmistakably form the dynamics of a genuine Porsche.

In the interior, the Panamera welcomes its drivers with an unprecedented generosity from Stuttgart while at the same time focusing. Everything here is clearly geared towards driving. The instruments, partly digital and fully integrated into the infotainment concept, carry the analogue rev counter in the middle. On the centre console, everything is grouped around the PDK selector lever, which controls the seven-speed Porsche dual-clutch gearbox specially developed for the Panamera. With the deliberate choice of a pure four-seater concept, the G1 Panamera has, as desired, generous room to move for all passengers and, thanks to the large centre consoles and the low seating position, offers an incomparably integrated feeling of space.

Porsche has retained this concept for the G2 generation Panamera, and ten years later the Panamera receives the driver in an intimacy that sets standards in this class. The operating concept with the latest generation of the Porsche Communication Management System and the Black Panel switch surface on the centre console has changed a lot at first glance, but the philosophy has remained the same: focusing on the driver and the driving experience with the greatest possible comfort.

Not only on long journeys, but also in tight corners, the possible spread between great comfort and absolute sportiness is still unparalleled. The effort involved in developing the PASM tuning and the adaptive air suspension - in the Panamera Turbo for the first time with switchable additional volume for an adjustable spring characteristic - is still impressive ten years after its debut. Anyone switching directly from the G1 to the G2 is therefore surprised at how the capabilities can be further increased in all dimensions.

"Thanks to the completely new chassis tuning and the repeated renunciation of the use of an existing platform, we were able to raise the bar even higher in the second generation with the three-chamber air suspension and our own suspension controller," says Dr. Gernot Döllner, who is noticeably proud of the development step of the new generation.

Whether it's the endurance run on the motorway close to top speed or the relaxed waving over the country road, the Panamera shows capabilities here that one would hardly consider possible. The fact that it always remains reserved, does not push its talent into the foreground and always rests sovereign in itself is testimony to the successful concept. He can at any time and yet never has to. He is fully there when it is necessary and gives room if not.

The Panamera is a real Gran Turismo - then and now even more so. 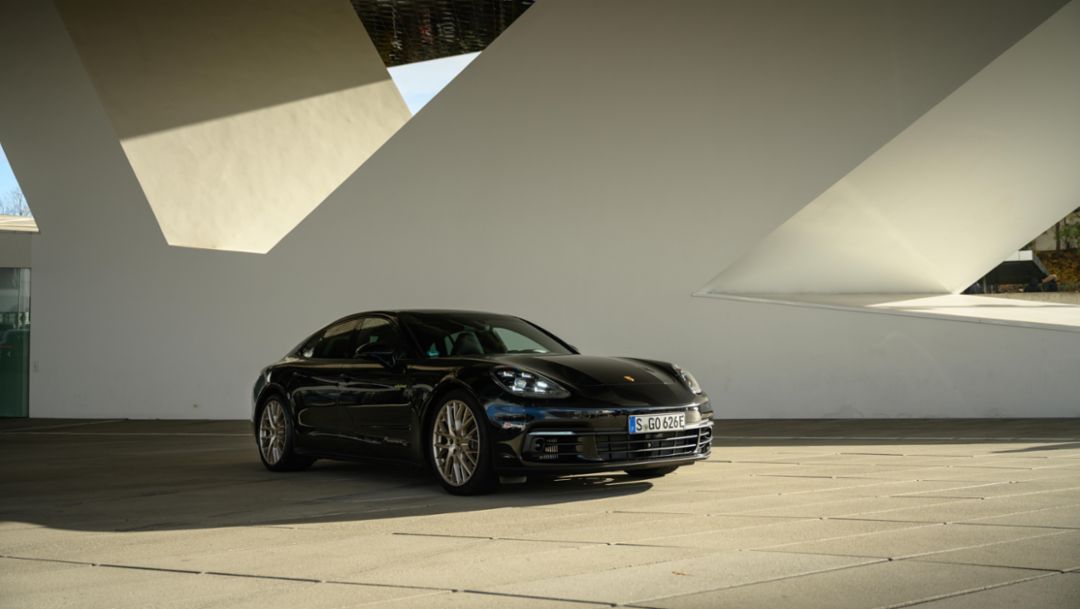 Golden rims. In addition Jet Black paint. For guest author Zaid Hamid it was clear that he once had to sit in a Porsche Panamera Edition 10 years. 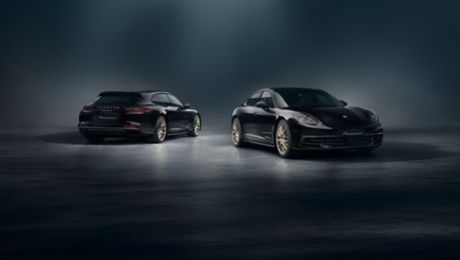 Porsche is celebrating the tenth anniversary of the Panamera line with a special edition.

Fuel consumption/Emissions*
Fuel consumption* combined 8.8 – 8.7 l/100km
CO2 emissions* combined 201 – 200 g/km
Porsche uses cookies to optimise and improve the website, as well as enable the availability of certain functions. By continuing to use this website, you agree to our use of cookies. For further information, please click  here