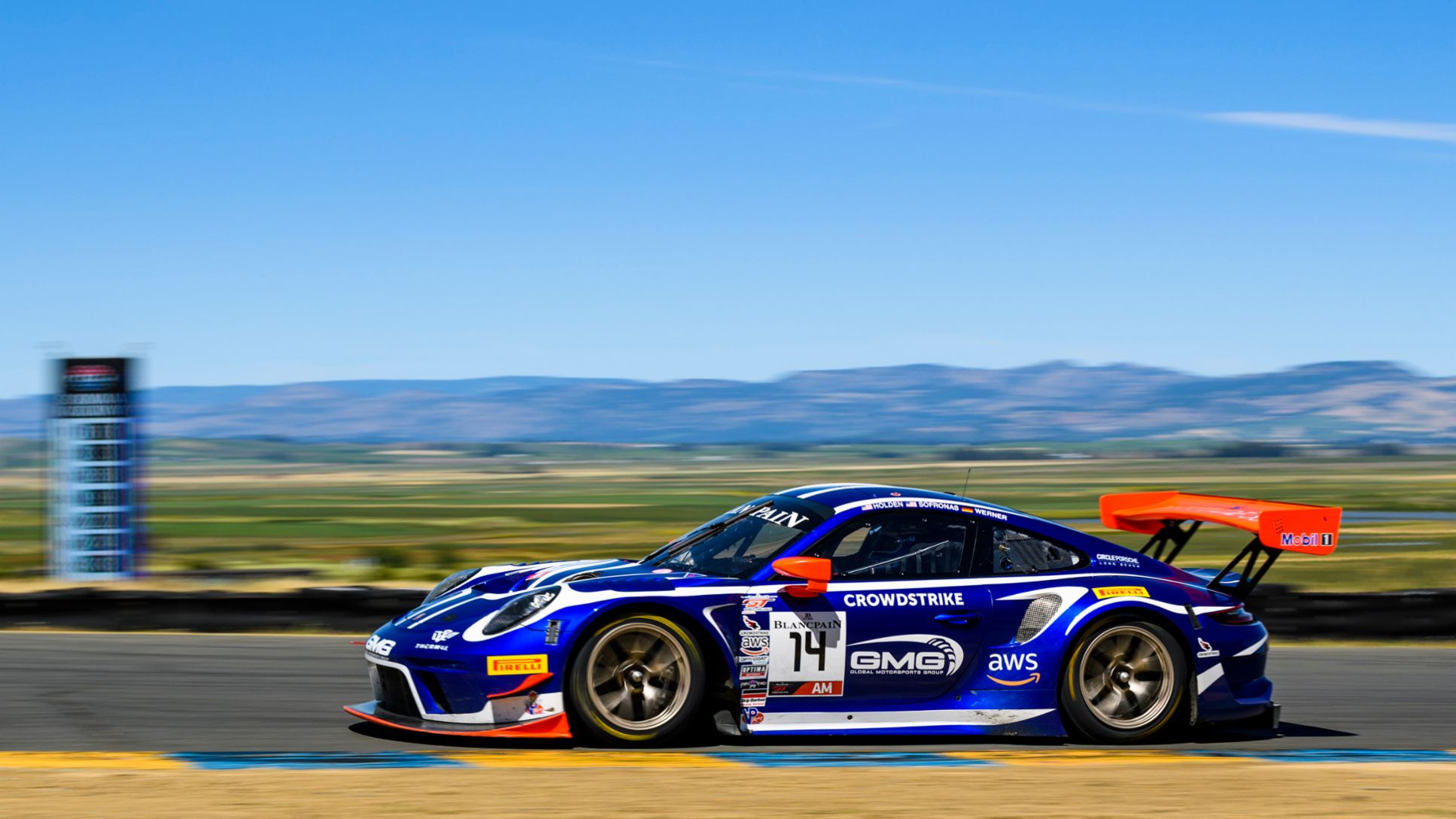 Motorsport is well known for long hours and hard work. While everyone associated with the SRO Motorsports America weekend at Sonoma Raceway, August 6 – 9, will be giving their all from early in the morning until deep at night, GMG Racing has decided to put the “challenge” in World Challenge. The Santa Ana, California-based race and road prep company will enter six different Porsche Motorsport-built race cars in the weekend’s eight races. The storied track in Sonoma, California plays host to two SRO GT World Challenge America races for GT3-spec race machines (90-minutes), two GT Sports Club (GTSC) events, 40-minutes each for the GT2-based racers and three each of GT4 America Sprint (50-minute) and SprintX (60-minute) using GT4-spec, road-based race cars.

GMG, owned by James Sofronas (Villa Park, California), is a longtime privateer entrant of Porsche race cars. The familiar blue and white machines have been a staple in the SRO-based championships in particular, often with Sofronas himself behind the wheel of Porsche 911-based race cars. However, this weekend’s Sonoma “Six-Pack” promises to be a major undertaking even for veteran drivers and crews. Sofronas will be in one of two Porsche 911 GT3 R race cars in the feature events of the weekend – a pair of 90-minute SRO GT World Challenge America races on Saturday and Sunday. The SRO Champion will race in his familiar ride, the No. 14, with veteran Jeroen Bleekemolen (Netherlands) in the Pro-Am class both days. Wright Motorsports’ No. 20 of Fred Poordad (San Antonio, Texas) and Max Root (San Diego, California), in the Am class, makes up the other entry for the German brand.

Among those piloting GMG-prepped Porsche race cars on the 2.52-mile road course in California’s wine country, is Jason Bell (Tampa, Florida). Bell will be behind the wheel of three different Porsche competition machines in eight different races. He will drive the No. 2 Porsche 911 GT2 RS Clubsport in the two, 40-minute GTSC races. GMG teammates will be in the Nos. 32 (Kyle Washington) and 57 (Stu Frederick). 311RS Motorsport will attempt to keep its win-streak alive at Sonoma. The new team won the first two rounds of the class at VIRginia International Raceway in July with Ryan Gates driving the No. 311.

Bell’s weekend is not through with the road car-based Porsche 911 GT2 RS Clubsport… nor is GMG’s. Bell will also fly solo in the three SRO GT4 America Sprint championship races. A pair of 50-minute races will be for the championship rounds at Sonoma Raceway while a third will be a make-up event for St. Petersburg. Bell’s Porsche for each will be the No. 2 GMG Racing Porsche 718 Cayman GT4 Clubsport. He will face-off against Porsche stalwart Spencer Pumpelly (Atlanta, Georgia) in the TRG-readied No. 66 Porsche 718 Cayman GT4 Clubsport for each round.

Three more races remain for GMG, Bell and Porsche at Sonoma, all in the GT4-spec machines. Two of the races have been scheduled for the Sonoma weekend while the third is a make-up race for the canceled Lime Rock Park event. However, unlike the Sprint rounds, the 60-minute SprintX races will bring a co-driver to the car. Bell will share the No. 2 Porsche 718 Cayman GT4 Clubsport with Porsche regular Andrew Davis (Athens, Georgia) in each race. They will be on track with five other Porsche entries. NOLASPORT comes prepared with three cars under its success race banner out of New Orleans, Louisiana. The No. 7 will be raced by Sean Gibbons and Zac Anderson who have already proven themselves a winning combination in the Am category, the No. 46 of David Walker and Russell Walker – also in Am – and the No. 47 of Matt Travis and Jason Hart who have stood on the top-step of the Pro-Am category already. TRG also brings an entry to the GT4 SprintX races with James Rappaport and Derek DeBoer campaigning the No. 17. RS1 attacks the GT4 SprintX ranks with the No. 37 for Charlie Belluardo and Jan Heylen.

A lap record in qualifying, pole position and a commanding lead in the race: despite this, the dream of claiming the maiden victory for the latest generation of the Porsche 911 RSR in the IMSA WeatherTech SportsCar Championship at round four of this year’s North American series remains unfulfilled. After a strong performance from the No. 912 racer driven by Laurens Vanthoor (Belgium) and Earl Bamber (New Zealand), which culminated in a 20-second lead, torrential rain threw a wrench in the works about 50-minutes before the end of the two-hour, 40-minute event. Bamber spun and slid from the track. At the wheel of the No. 911 Porsche GT Team entry, Frédéric Makowiecki (France) and Nick Tandy (Great Britain) at one point advanced to first-place in the chaotic weather conditions, however, when the race restarted behind the safety car the No. 911 had to pit. In a last-ditch effort to fight for class victory from third-place under difficult conditions, Tandy, with no visibility, slid from the track in the rain. He and Makowiecki finished in fourth-place, with the sister car in fifth-place.

"In the end the conditions were too bad to keep racing. You see this when multiple cars have no chance to even control themselves on the straights."

In the GTD class for vehicles complying with the international GT3 regulations, starting driver Ryan Hardwick (Atlanta, Georgia) and factory pilot Patrick Long (Manhattan Beach, California) made the most of the wild weather. Putting in a double stint, Long worked his way up the order from tenth to seventh-place. In the mayhem, Long had stayed cool and maneuvered his way up to fourth-place at the wheel of the 500+hp Porsche 911 GT3 R race car fielded by the Wright Motorsport customer team. Ultimately, the Ohio-based entry finished in fifth-place in the GTD class.

Porsche travels to VIRginia International Raceway, round five of the season, on August 23 ranked third in the manufacturers’ classification just nine points from the top. Reigning champions Bamber and Vanthoor retain their second-place spot in the drivers’ standings with 120 points. Their brand colleagues Makowiecki and Tandy occupy fifth-place with 113 points.

Steffen Höllwarth, Head of Operations IMSA Championship.
“The result is very disappointing. We managed to set fast lap times over the distance, so the long runs in the practice sessions paid off. We were very well positioned and were able to steadily work our way forward in the race. The number 912 car was leading when the sky opened up. Rain, hail, lightning; we got the lot. We decided to pit a little late. When 912 came in, all chances of winning were scuttled. After the race interruption, the 911 had to pit briefly one more time to refuel and switch to wet tires. In the last ten minutes, the race turned into a real thriller. Nick Tandy pulled out all stops. With two laps to the flag, he slid off the track in the extreme conditions and hit the barriers. Fortunately, nothing serious happened to him.”

Frédéric Makowiecki, Driver, No. 911 Porsche GT Team Porsche 911 RSR.
“Our starting position for the race could have been better, but we managed to work our way up the order little by little. In the dry, we were in a position to fight for a podium spot. The rain made things incredibly difficult for everyone. Our focus is now on the next race in Virginia.”

Nick Tandy, Driver, No. 911 Porsche GT Team Porsche 911 RSR.
“We had another race where, with a bit more luck, we could have had a good result. In the end the conditions were too bad to keep racing. You see this when multiple cars have no chance to even control themselves on the straights. We lost all grip and aquaplaned off the road at high speed. Luckily, I'm okay and I’m very thankful to the team at Porsche Motorsport for building such strong cars.“

Laurens Vanthoor, Driver, No. 912 Porsche GT Team Porsche 911 RSR.
“The number 3 Corvette got a better start and was faster on the straights. I cleverly tucked in behind and conserved my tires, because the car in front of me had attacked too hard – so I could pass it, take the lead during my stint and build a gap. What followed was a catastrophe. Earl didn’t get the radio message to come into the pits. He kept going on the dry track, got caught in the first downpour and lost the car.”

Earl Bamber, Driver, No. 912 Porsche GT Team Porsche 911 RSR.
“We had two great cars today. With the 912 we opted for the right tires to win, but the message about the rain didn’t reach me. I made a mistake and flew off the track. Now we have to look ahead and earn as many points as possible at the next race.”

Patrick Long, Driver, No. 16 Wright Motorsports Porsche 911 GT3 R.
“Another eventful IMSA race. Road America always has some treats towards the end. The strategy, pit stops and execution of the race by Wright Motorsports was spot-on today. We made positions where we could and ended-up with a top-five. It was a pretty clean race for us. The Wright Porsche is unscathed and, compared to some, that’s a great way to push forward to the next round. Decent points day. As a group, we are continuing to grow and that is what it is all about.”

Ryan Hardwick, Driver, No. 16 Wright Motorsports Porsche 911 GT3 R.
“This result happened because of two things: Bobby’s call on the pit stand to stay out one additional lap to see if the rain would come, and also to Pat’s masterful driving in the final two stints. The team really dug us out of the hole I created in the first stint. Solid points day for sure.”

The Michelin Pilot Challenge will next race at VIRginia International Raceway on August 23.

After having had the season-opening St. Petersburg, Florida round in March canceled while teams were on-site, the IMSA Porsche GT3 Cup Challenge USA by Yokohama had a successful 2020-debut at Road America over the August 1 – 2 weekend. The opening weekend of North America’s premier one-make championship came down to a battle between Riley Dickinson (New Braunfels, Texas) and Jeff Kingsley (Canada) – both Porsche Young Driver Academy North America graduates. It was Kingsley, driving for Madison, Wisconsin entrant Kelly-Moss Road & Race, who earned the first race victory of the year on Saturday, August 1. The win gave Kelly-Moss it’s record 60th class win in the championship that exclusively runs the Porsche 911 GT3 Cup race car. 2020 IMSA Hurley Haywood Scholarship winner Dickinson finished in second-place in the first of the two 45-minutes races. The positions swapped on Sunday morning, August 2, with Dickinson – who just graduated from high school in June – earning the win in Race 2. Kingsley came home in second-place.

The IMSA Porsche GT3 Cup Challenge USA by Yokohama will next race at VIRginia International Raceway on August 22 and 23.