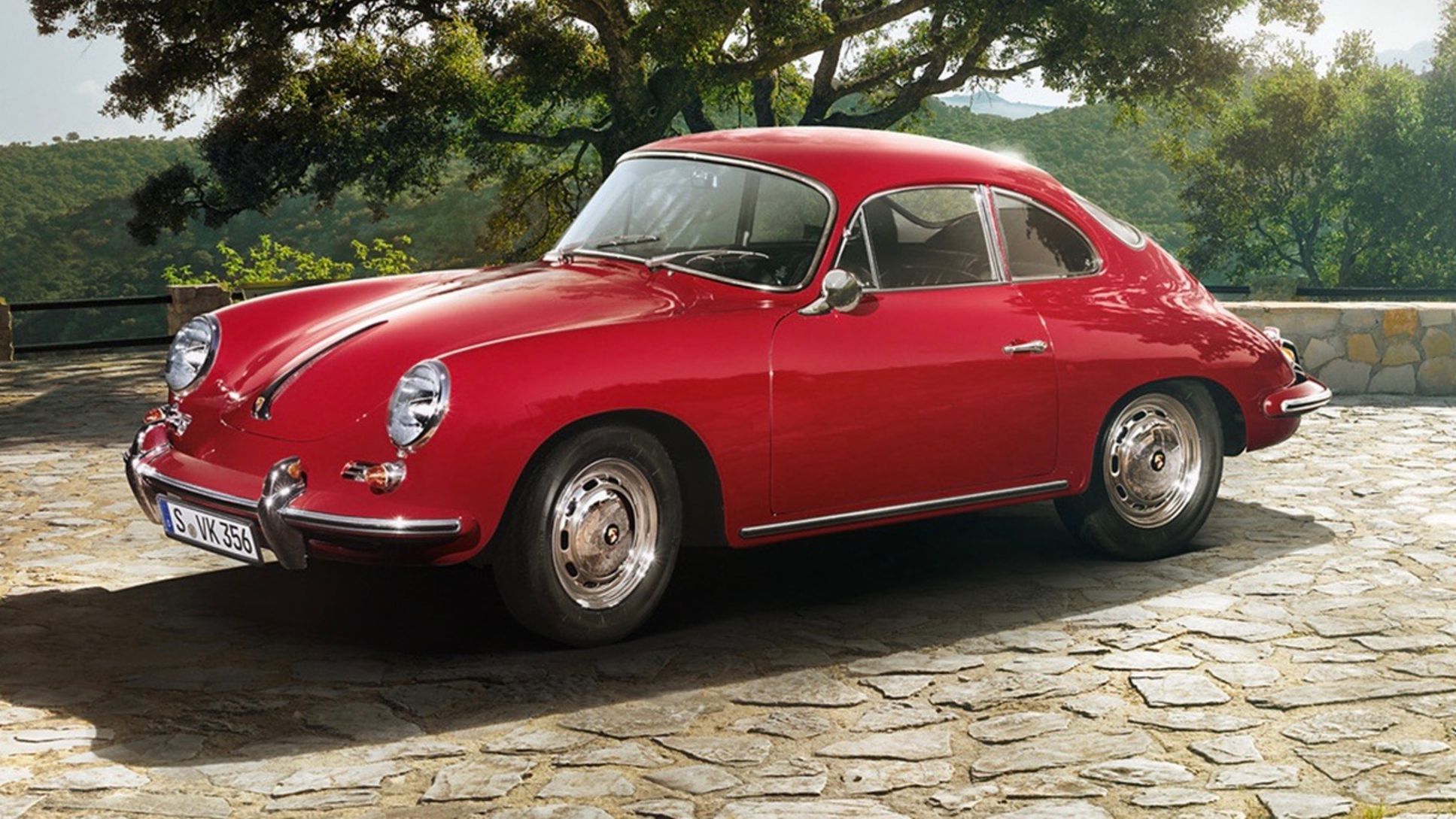 In an age when most of its competitors have been absorbed into larger manufacturers, Porsche remains a staunchly — and profitably — independent maker of high-performance sportscars.

The Porsche name has become synonymous with sports cars and racecars because that is what company founders Ferdinand Porsche and his son Ferdinand ("Ferry") set out to build when they first set up shop with 200 workers in 1948.

The senior Porsche, whose engineering experience included Daimler-Benz, established an independent design and engineering firm in 1931 and designed the Volkswagen Beetle. He brought a half-century of experience with innovation, from a turn-of-the-century four-wheel drive gasoline/electric hybrid vehicle to the virtually unbeatable Auto Union Grand Prix cars of the 1930s.

The younger Porsche helped grow the new company and was instrumental in designing the first Porsche sportscar, the 356. Though sporting just 40 horsepower from a rear-mounted, slightly souped-up Beetle engine, the first Porsche quickly made its mark with agile handling, as well as attributes almost unknown among sportscars of the day — comfort and reliability.

Porsche is also synonymous with racing, and Porsche cars began competing almost immediately. To date, Porsche cars have won an estimated 24,000 auto races around the world, including more than 50 class wins at Le Mans.

Porsche introduces the aerodynamic "356," named for its design project number. Through 1949, the company hand-builds the first 52 cars in a small garage in Gmund, Austria.

Porsche leases space in the Reutter body factory in Zuffenhausen, a Stuttgart suburb. Reutter builds bodies for the 356 and production reaches 369 for the year. Sportscar enthusiasts take notice of the lightweight, quick-handling 356. In New York, importer Max Hoffman places the first North American order for Porsches.

Ferdinand Porsche dies. Horsepower for the 356 jumps to 60.

Speedster model introduced as low-priced, "stripped-down" version of 356. Today the 1954-1957 Speedsters are among the most sought-after Porsches by collectors.

Successor to the 356 first shown — the 911 powered by an all-new 2.0-liter, 130-hp six-cylinder engine. Porsche takes over its former body subcontractor, Reuter and establishes its own distribution network in the United States. Worldwide annual production surpasses 11,000.

Porsche replaces the 912 with the 914, a lower-priced, mid-engine sportscar. The 914 offers either a Volkswagen four-cylinder engine or a Porsche six-cylinder engine (914/6).

Porsche opens its Research and Development Center in Weissach, Germany. Ferry Porsche becomes chairman of the supervisory board of Porsche AG.

Porsche replaces the 914 with the 924, a front-engine sports coupe. The car is powered by an Audi engine and built by Audi and features a rear transaxle for optimal weight distribution. Porsche becomes the first carmaker in the world to heat-galvanize steel car bodies, and Porsche cars come with a six-year guarantee against rust.

Porsche introduces the 928. It is radically different from the 911 and features a front-mounted, liquid-cooled 240-horsepower V-8 engine. The 911 becomes the 911 SC, featuring a 3.0-liter engine and a host of enhancements.

924 model joined by 924 Turbo. The 924 is Porsche’s most popular model and also a successful racecar.

Porsche Cars North America established with its headquarters in Reno, Nevada. New 944 model based on 924 but with modified body and a Porsche-built four-cylinder engine.

First 911 Cabriolet introduced. In the US, the Cabriolet outsells the Targa and quickly accounts for about one-third of 911 sales.

Porsche AG goes public, with the Porsche and Piech families holding 875,000 shares of stock and 875,000 preferred shares listed for investors. 911 now known as the Carrera, featuring greater performance from a 3.2-liter engine.

Porsche 944 is first car sold in US with both driver’s side and passenger airbags as standard equipment.

Body production ends at the former Reuter plant. Production shifts to a new factory across the street. Porsche contract-builds the 500E high-performance sedan for Mercedes-Benz. The company will build more than 11,000 of these cars through 1995.

Dr. Wendelin Wiedekin, head of production and materials management, becomes chairman of Porsche AG. Refocused on 911 development, Porsche introduces the final version of the air-cooled classic. The same year, Porsche unveils a concept for a mid-engine sportscar called "Boxster." Overwhelming positive response persuades Porsche to develop the car, which will appear in 1997.

Porsche discontinues its front-engine models, the 968 (the final evolution of the 944), and the 928.

One-millionth Porsche built in July. The 911 Turbo features the all-wheel drive system from the 911 Carrera 4, dual turbochargers and intercoolers and 400 horsepower.

Ferry Porsche dies at age 88. Porsche introduces the first 100-percent all-new 911 model since the first one in 1964. The new car breaks with 911 tradition by using a liquid-cooled engine — though it’s still a horizontally opposed six. The all-wheel drive Carrera 4 introduces the Porsche Stability Management system.

Porsche confirms that it will build its new sport-utility vehicle in Leipzig, Germany. The vehicle, designed and developed by Porsche and shared with Volkswagen, is scheduled to debut in 2002.

Boxster features larger 2.7-liter engine. Boxster S introduced with 3.2-liter, 250-horsepower engine. All-new 2001 911 Turbo introduced with an engine based on that of the GT1 racecar that won LeMans in 1998. Tiptronic S five-speed automatic transmission introduced as an option.

Porsche unveils the Carrera GT during the Paris Auto Show. Has a mid-engine, open-cockpit super car concept featuring a 5.5-liter, normally aspirated V-10 powerplant with speed in excess of 200 mph.

Porsche announces plans to produce the Carrera GT with a six-liter V10 engine. An all new 911 Targa and 911 Carrera 4S are introduced based on Porsche's current 911 models.

The all-new 911 Carrera and Carrera S debut with a familiar silhouette, but with more power and options. 911 Turbo S, available as a coupe or cabriolet, comes standard with 444 horsepower and Porsche Ceramic Composite Brakes. New Cayenne standard features, including Homelink, an electronically latching rear tailgate and a six-speed manual gearbox on the Cayenne with a V6 engine.

At the Geneva Motor Show, Porsche shows the first series-production car with spark-ignition engine to feature a turbocharger with variable blade geometry (VTG) - the 2007 Porsche 911 Turbo. At Geneva, Porsche also introduced the new Porsche 911 GT3. The new 911 GT3 was equipped with a 3.6 liter naturally aspirated engine develops 415 hp, also shown at this time. At about the same time the Porsche Cayenne Turbo S is launched.

In an historic race at the third American Le Mans Series (ALMS), the Porsche RS-Spyder racing cars entered by the American Penske team took the first and second overall spots, marking the first time-but not the last-that a sport prototype race car in the LMP2 class beat all competitors. That year Porsche dominated the LMP2 class with seven series wins.

In August of 2006, Porsche introduces an updated and more powerful version of its famous Boxster and Boxster S roadsters. At about the same time, Porsche brings the standard version of the Cayman to market at a price of $49,400.

The new 2008 Porsche Cayenne is unveiled to the public for the first time at the North American International Auto Show, the introduction marks the world debut of the more powerful and stylish generation of Porsche's sport utility vehicle. Porsche also plans the launch in Frankfurt, Germany, of its top-of-the-line 911 Turbo Cabriolet, which offers an exhilarating 480 horsepower (60 horsepower more than its predecessor), Variable Turbine Geometry (VTG), and all-wheel drive. The market launch is September 8, 2007.

On February 4 in the 200,000th Porsche Cayenne rolled proudly off the assembly line in Leipzig, Germany. The model was a Cayenne GTS, which was unveiled that month at the Chicago Auto Show and launched that spring. That same month, Porsche Cars Canada, which had previously been a part of PCNA, becomes a separate subsidiary called Porsche Cars Canada.

In March, PCNA celebrates 10 years of being in Atlanta. On June 8th, Porsche celebrates its 60th anniversary of a sports car carrying the Porsche name plate.

On the racing front in the U.S. the big news is that Porsche, with Penske Racing, takes the ALMS LMP2 Championship and Porsche wins the GT class in ALMS as well.

In October, Porsche launches the new 911 Carrera and Carrera S and their Cabriolet siblings that offer new breakthrough technologies, including direct injection and the highly advanced PDK transmission.

On January 5th, Porsche releases the first photos of its first four-door sports sedan, the Panamera; the company also announces that the car will be unveiled for the first time at the Shanghai Auto Show that spring.

On January 31, the new Porsche Museum opens its doors to the public in Stuttgart-Zuffenhausen. Representing one of the most spectacular buildings every built by the company, the Porsche Museum serves to present the fascinating thrill and diversity of the Porsche brand to visitors from all over the world.

In February 20th, Porsche releases further details on it forthcoming Cayenne S Hybrid that will come with a sophisticated parallel hybrid system. The company also announces that the same system will come in the Panamera several year's after its launch.

On April 9th, Porsche unveils the new 911 GT3 for the first time in North America.

On April 20th in Shanghai, Porsche officially unveiled the Panamera-the German carmaker's first all-new, built-from-the-ground up vehicle in seven years. By June, final assembly of the Panamera is at full capacity at Porsche's Leipzig facility.

In September, Porsche debuts the GT3 RS, GT3Cup Car, and 911 Turbo and 911 Turbo Cabriolet and 911 Sport Classic (not available in the U.S.) at the Frankfurt Auto Show.

On October 17th, the Panamera is launched to the U.S. market. At the L.A. Auto Show, Porsche reveals the exciting new Boxster Spyder.

On July 28, Porsche announces that it will build the 918 Spyder. One year after its international market launch, on September 10th, the Porsche Panamera reaches a production milestone of 22,518. Matthias Müller becomes the new Chief Executive Officer (CEO) of Porsche AG, officially, on September 29th. In October, Porsche Cars North America begins selling the V6-powered 2011 Cayenne.

As part of its 60th anniversary celebration of selling cars in the U.S., Porsche Cars North America conducts a My Porsche Classic Search and locates what it believes is one of the oldest Porsche's sold in the U.S. – a lovingly restored 1952 Strawberry Red 356 Cabriolet. The My Porsche Classic Search also yielded the discovery of another distinguished and even rarer Porsche – a blue 1950 356 Cabriolet. This car is one of the very first series production 356s built in Stuttgart.

The new generation of the Boxster is announced. The second-generation Porsche Cayenne GTS and Turbo S are announced.

Porsche celebrated 50 years of the Porsche 911 with a special anniversary model. The new generation of the Cayman is announced. The Porsche Macan S and Macan Turbo have their world premiere at the Los Angeles Auto Show.

The Porsche 911 Targa debuts at the North American International Auto Show. For the first time, the Porsche Boxster and Porsche Cayman are offered as GTS models, which premiered at Auto China in Beijing.

The new generation of the Cayenne will be launched in four versions in the United States: Cayenne Diesel, Cayenne S, Cayenne Turbo, and the world premiere of the Cayenne S E-Hybrid, which is the first plug-in hybrid in the premium SUV segment. This model, together with the Panamera S E-Hybrid and the 918 Spyder, makes Porsche the world's only car manufacturer to offer three plug-in hybrid models.

The new generation Boxster Spyder is revealed at the New York Auto Show.

The Cayman GT4 and 911 GT3 RS models are announced.

The Porsche 918 Spyder production is completed.

The 911 R and 718 Boxster models debut at Geneva Motor Show.

The 911 GT3 Cup Race Car and the Panamera 4 E-Hybrid debut in Paris.

Porsche opens a Motorsport headquarters and a second Experience Center in Carson, California.

The 911 RSR makes its debut at Los Angeles Auto Show.

The One Millionth 911 rolls off the production line.

Porsche announces the official name of the first purely electric Porsche, the Taycan.