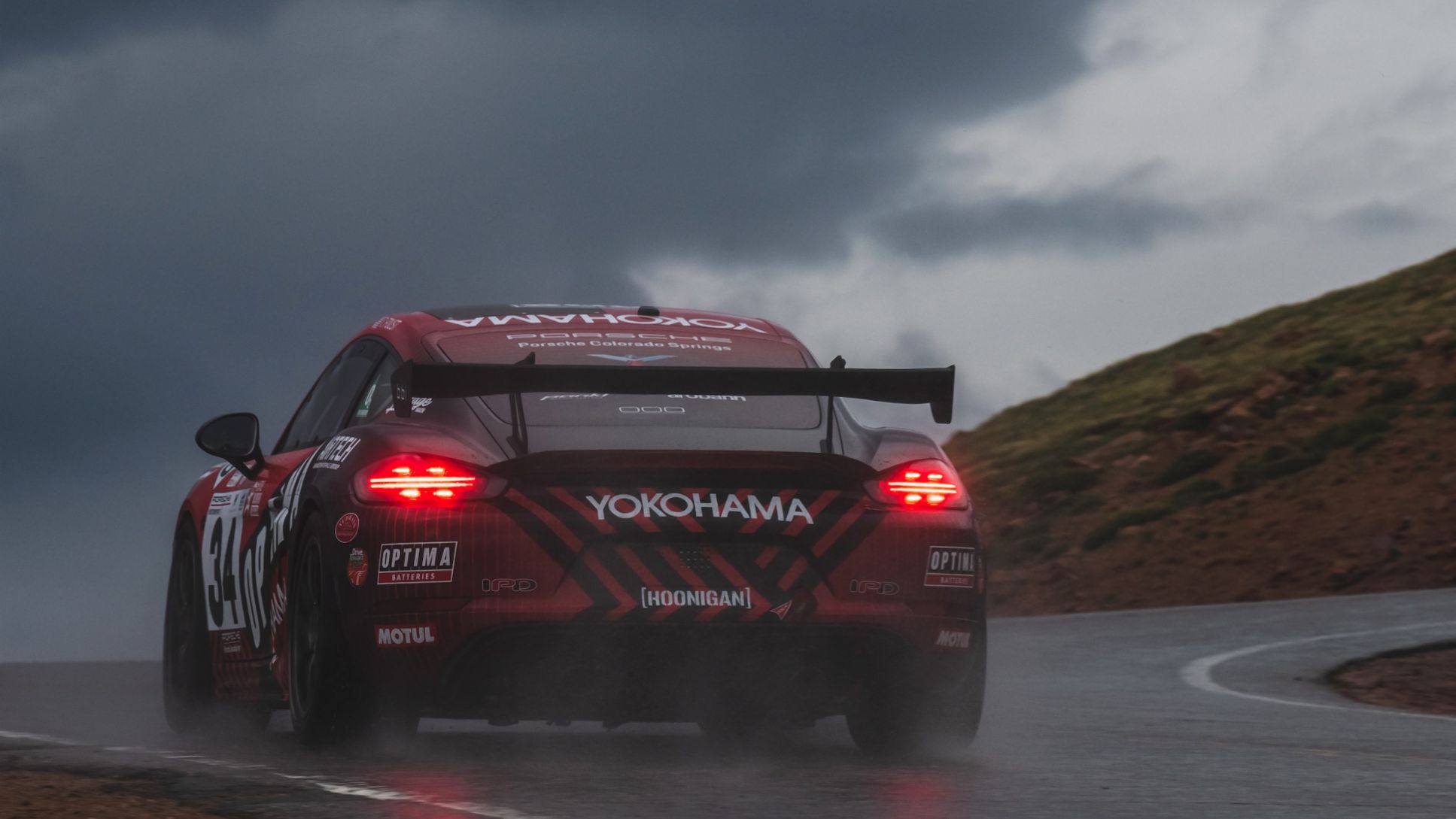 Porsche is being represented by 19 customer entries who are hoping to carry the German sports car manufacturer’s crest to the finish line at the 100th Running of the Broadmoor Pikes Peak International Hill Climb, brought to you by Gran Turismo on June 26. The array of Porsche-based machines range from road car based 911s to multiple generations of the mid-engine 718 Cayman model line as well as a 935-19, 914 and a masterful Porsche-based race cars from the minds of a modern-day Pikes Peak stalwarts. Recognized as the “Race to the Clouds,” the Pikes Peak International Hill Climb (PPIHC), challenges entrants against the 12.42-mile, 156-turn layout as it climbs from its 9,390-foot starting line up to the finish at 14,115-feet atop Pikes Peak – “America’s Mountain” in Colorado Springs, Colorado.

Fred Veitch and Porsche of Colorado Springs announced on June 7 a new award recognizing the fastest overall Porsche racer at Pikes Peak. The driver who sets the best official time up the Mountain, regardless of the division in which they are entered, will be awarded the PPIHC Bergmeister Award for the achievement. Translated from German, Bergmeister is the “master” (meister) of the mountain (berg). Along with the accolades comes a specially designed trophy that echoes the iconic silhouette of a Porsche 911 as well as a $1,000 donation in the driver’s name to the charity of his or her choice.

Porsche Motorsport North America (PMNA) and the PPIHC will continue the one-make Porsche Pikes Peak Trophy by Yokohama division for a fifth year. Six drivers will contest the class in the Porsche 718 Cayman GT4 Clubsport with full support of PMNA and Yokohama. Top names abound in the division that exclusively uses the previous generation mid-engine Porsche sports car including Unser, Ingram and Lieberman. Fourth-year driver George Hess III (Colorado Springs, Colorado) is the most experienced in the car up the Mountain having raced all but one year in the exclusive division. The local driver will be behind the wheel of the No. 744. Chas Wirken (Mesa, Arizona) is back for his third attempt piloting the No. 903 while Cameron Ingram (Durham, North Carolina) used 2021 to learn the category and is back in the No. 9 for a sophomore charge to victory. The rookie class is made up of Gilles Nadeau (Knowlton, Quebec) in the No. 611. Nadeau is a veteran of Porsche one-make racing but has never put himself up against the challenge of Pikes Peak. Jonny Lieberman (Los Angeles, California) is perhaps best known as an automotive journalist, but he will now tell the story of the second-oldest race on the continent from the perspective as the driver of the No.73. 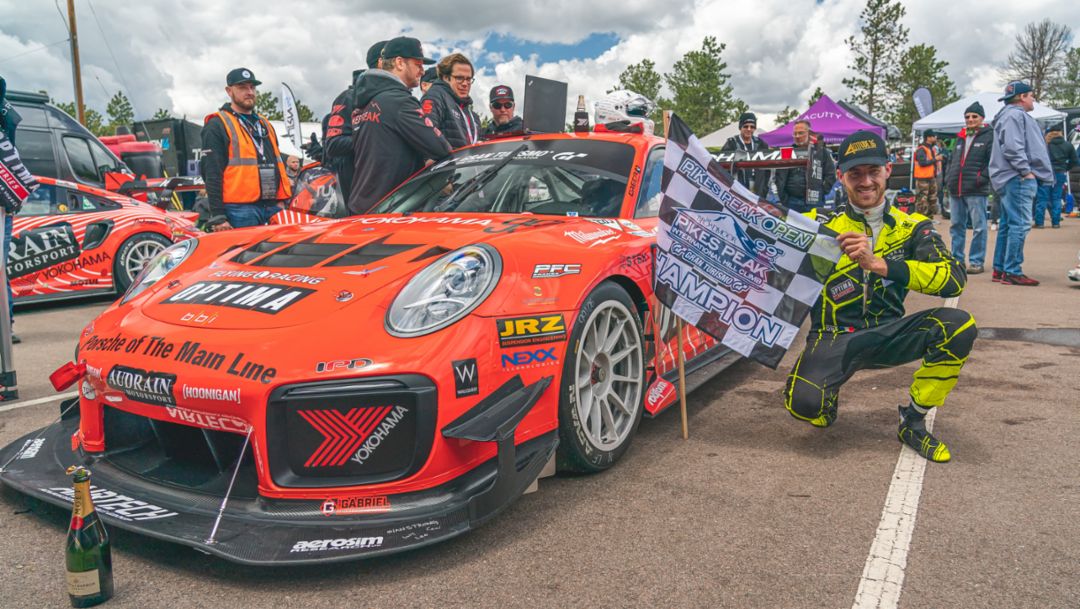 The most famous name in the history of the race is unequivocally Unser. In 2022, Loni Unser, daughter of former Indy car driver Johnny Unser and grand-niece of Al Sr. and Bobby Unser, is focused on placing her name in the family lineage of legendary record holders at Pikes Peak. The Sun Valley, Idaho-resident will use the No. 92 Porsche 718 Cayman GT4 Clubsport in extending the deep connection of the Pikes Peak International Hill Climb and the Unser family.

The lone Porsche in the Exhibition Division will be piloted by three-time King of the Mountain and PPIHC Hall of Fame member David Donner (Colorado Springs, Colorado). The seven-time winner of the event will seek the production car record in the No. 000 Porsche 911 Turbo S adorned with the unique livery of Porsche-focused magazine 000. The 2022 Porsche was delivered new to Champion Porsche and then prepared for a record run per PPIHC rules. Donner will need to better the 2019 time of Rhys Millen (10-minutes and 18.488-seconds) set in a Bentley Continental GT. This is Donner’s 24th season racing at Pikes Peak. He has set the overall best time, three-times to earn “King of the Mountain” honors.

The Pikes Peak Open Division allows major modifications to production vehicles. The three Porsche-based machines entered here push the boundaries proving the impressive capabilities engineered into every Porsche. One of the most unique machines in the category is driven by Ken Block (Park City, Utah) and built by longtime Porsche specialist BBi. The No. 43 BBi-SVRSR, widely known as Hoonipigasus, is a prototype machine based on the profile of a 1966 Porsche 911. The Porsche passion project is driven by the veteran extreme sports driver and second-year Pikes Peak entrant. Block’s ride enjoys turbocharging, adaptive suspension, highly developed aerodynamics and a livery in homage to the famous “Pink Pig”. E-Motion brings its own special creation and car control expert in the way of Rhys Millen (San Juan Capistrano, California) and the No. 67 Porsche 911 GT3 R TT. Millen will be making his 26th career start. Local Chris Strauch (Colorado Springs, Colorado) will race his fan favorite 1970 Porsche 914 Widebody in the Open group.

Time Attack 1 is popular with fans and with Porsche entries. Eight cars with Porsche heritage slot into the division for cars which can be modified and specialized production-based two and four-wheel drive entries. Eligibility is restricted to close-bodied four-wheeled vehicles that must maintain their original configuration as delivered.

Two famous racing names will join forces for the June 26 race in Time Attack 1. David Donohue (West Chester, Pennsylvania) reconnects with the legendary entrant Brumos Racing in a new Porsche 911 GT2 RS Clubsport numbered, appropriately, 59 and liveried in the familiar red, white and blue of the renowned Porsche race team. While recognized around the world for its massive success in endurance sports car racing – including titles with Donohue – this is the first time the Florida-based Porsche juggernaut has competed in the “Race to the Clouds”. It is Donohue’s seventh attempt.

For the second time in the last three years, eight-time event winner and Porsche Pikes Peak Trophy coach Jeff Zwart (Aspen, Colorado/Long Beach, California) will bring the exciting Porsche 935-19 racer to chase his ninth division title. The resident of Aspen, Colorado is a longtime Porsche supporter and challenged closely for the win with the 935-19 in 2020. Gustav Lundh (Sweden) returns to Pikes Peak for a second time with a 2014 Porsche 911 Turbo S while Phillipe Marion (France) makes his rookie appearance in a 2007 Porsche 911 GT2-based car. Second-year entrant Steve Zimmer (Luxembourg) will take to America’s Mountain in the No. 86 Porsche 911 GT3 RS 4 based on the 2014 model year road car. 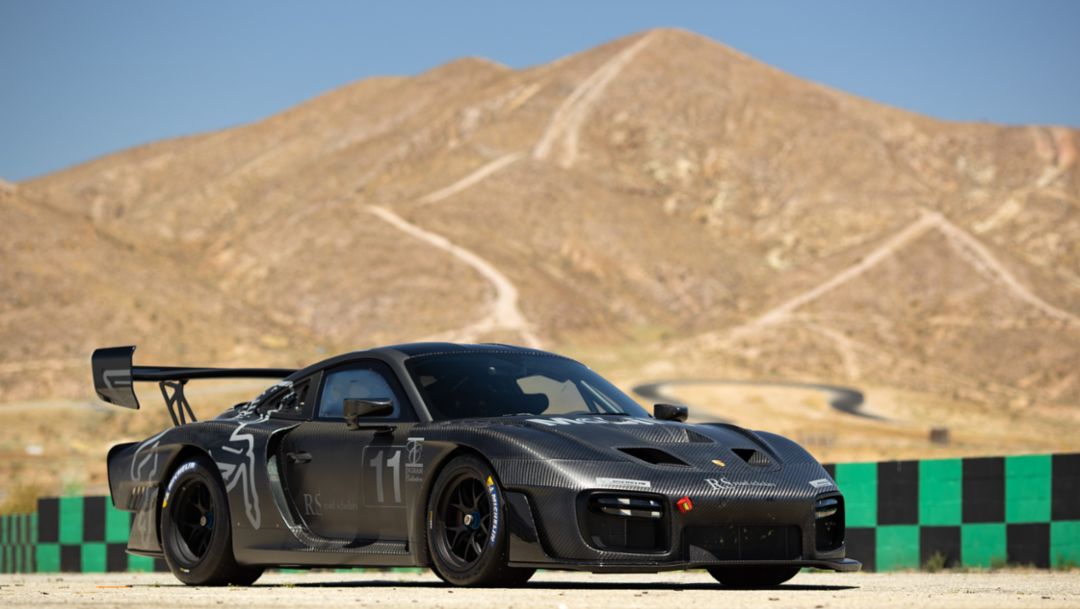 When the Porsche 935-19 was unveiled to the world at Porsche Rennsport Reunion VI, Jeff Zwart began to formulate a plan to take the Porsche 911 road car-based motorsport model up the iconic mountain in Colorado Springs, Colorado.

The Unlimited Division at Pikes Peak is just as its name implies. One entrant, Andy Kingsley of nearby Buena Vista, Colorado, has packed a 2002 Porsche 911 with everything he can in an attempt for an outright course record. Driving the No. 96, this will mark Kingsley’s sixth year of competition at Pikes Peak.

Porsche made its debut at the Pikes Peak International Hill Climb in 1958, and like most things motorsports, Porsche left an indelible mark on the “Race to the Clouds” capturing 32 class victories and twice turning the quickest time for the overall win. While Bill Paine was the first to drive a Porsche 356A on “America’s Mountain” in 1958, it was in 1960 when Robert Donner Jr. and Mike Collins each earned the first titles for Porsche in two different classes with variants of the Porsche Type 718 RSK. It would not be until 1976 when future four-time Indianapolis 500 winner Rick Mears raced a Porsche-powered buggy up Pikes Peak for the first overall title. The feat would be repeated once more in 1981 when a Porsche 914 powered buggy driven by Gary Lee Kanawyer gave the Stuttgart-Zuffenhausen automaker its last overall win in Colorado. No Porsche was entered between 1964 and 1970.

Live streaming coverage of the centennial running of the Pikes Peak International Hill Climb can be found on race day, Sunday, June 26 on the Mobil1 Facebook page: https://www.facebook.com/Mobil1/ . For more information, visit: https://ppihc.org/ .

Comments before the 100th PPIHC

“There is an honor and prestige to racing at Pikes Peak. It is a special event that transcends motorsports. It is an event that people put on their bucket list not only to race but to attend as a spectator. To be a part of the 100th running is special to us. The first Porsche ran here 64 years ago so that gives you an idea of what it means. It is right up there with Le Mans, Sebring and Daytona for us. We have one of the most impressive lists of Porsche cars I can ever remember seeing for a run up the Mountain. You never know what is going to happen but the drivers, teams and cars we are associated with gives me a great deal of confidence. There is some really special machinery carrying the Porsche badge in this centennial year.”