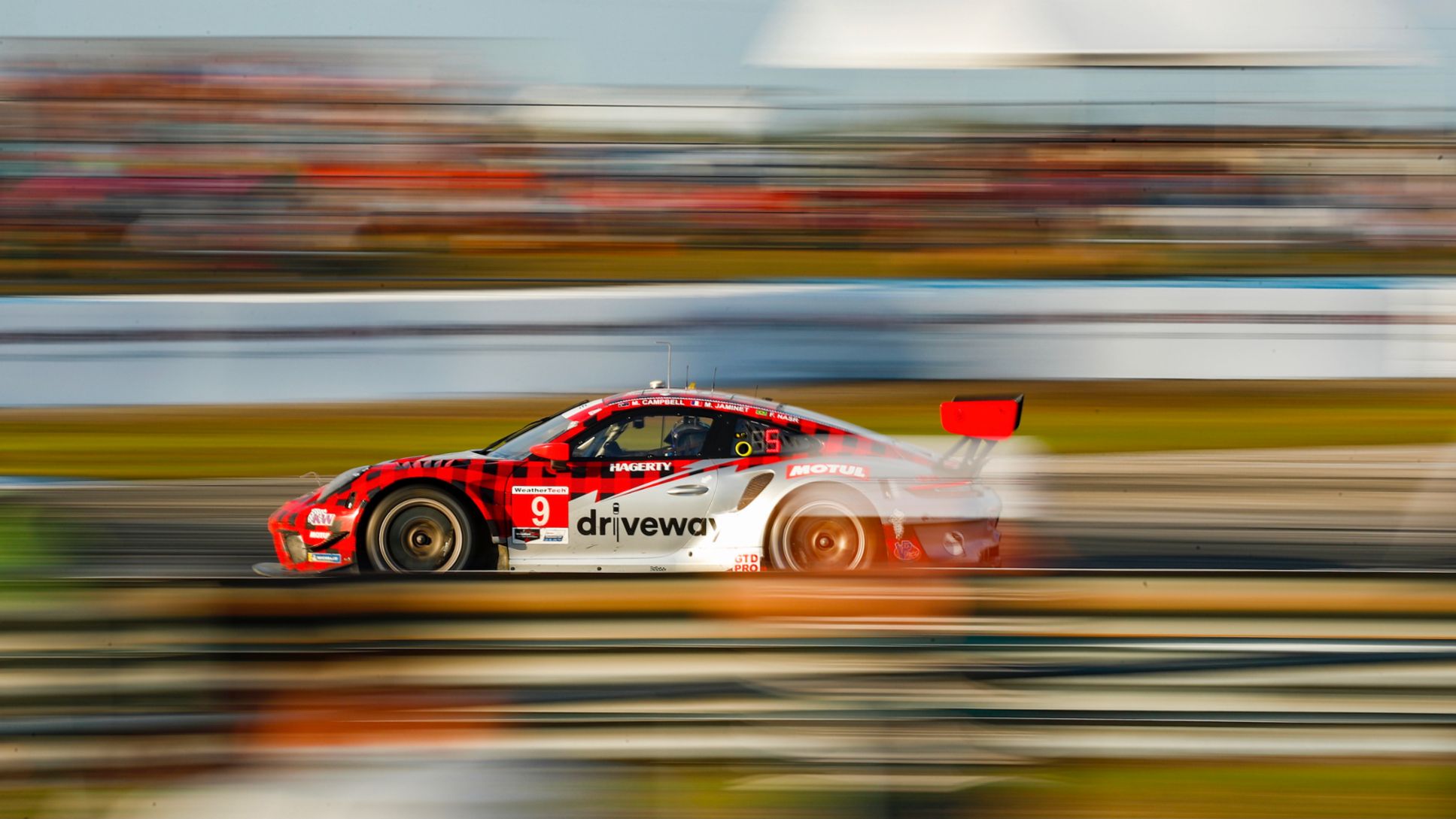 Three Porsche customer teams will be in action for the 54th running of the prestigious Sahlen’s Six Hours of The Glen this weekend: Pfaff Motorsports, Hardpoint and Wright Motorsports. The June 26 race at Watkins Glen International is the third endurance race of the sports car racing season. Along with the Rolex 24 At Daytona (won by Porsche in both the GTD Pro and GTD classes), the Mobil 1 Twelve Hours of Sebring and the Petit Le Mans at Michelin Raceway Road Atlanta, the four events comprise the WeatherTech Endurance Championship – a championship within a championship for events of six hours or more in length. Porsche, which currently leads the championship for long-distance races in the GTD Pro class, won the enduro GTD title in 2021 with Wright Motorsports. The 3.4-mile, 11-turn track located in Watkins Glen, New York will also host the Michelin Pilot Challenge and Porsche Carrera Cup North America Presented by the Cayman Islands.

Porsche is the all-time leader for victories at in the prestigious six-hour with 10 overall and 53 class victories in 53 previous runnings of the race. The total is 35 more class wins than the marque’s nearest rival, Chevrolet.

The GTD Pro class – for GT3-specification cars with all professional driver lineups – returns to competition this weekend with Pfaff Motorsports representing the German sports car manufacturer. The No. 9 “Plaid Porsche” 911 GT3 R racer will be shared by only two drivers, factory aces  Matt Campbell (Australia)  and Mathieu Jaminet (France) for six hours of racing. The category last raced at WeatherTech Raceway Laguna Seca with Pfaff earning the class win, its second of the season – the other being the Rolex 24 at Daytona in January.

The driver pairing holds a 50-point lead in the standings while the Canadian-based operation holds the same lead over the No. 3 Corvette in the entrant, or team, standings after four rounds. Porsche is 40-points ahead of Chevrolet within Manufacturer competition.

Two customer Porsche 911 GT3 R race cars are entered in the Pro-Am style GTD class for the June 26 enduro. Wright Motorsports – who enjoys two race wins (Daytona and WeatherTech Raceway Laguna Seca) – will field full-season drivers Ryan Hardwick (Atlanta, Georgia) and Jan Heylen (Belgium now living in Florida) along with 2021 GTD class champion Zacharie Robichon (Canada) in the No. 16. The trio won together at Daytona. After six races, Hardwick/Heylen are currently ranked in second -place of the class Drivers’ standings, a mere 34 points out of the lead. The Ohio-based race team is the same number back in the Team championship. Wright is the defending champion of the WeatherTech Endurance Championship’s GTD class.

Hardpoint returns to WeatherTech Championship competition with their full attention now on the endurance races. Team principal Rob Ferriol (Fayetteville, North Carolina) and Katherine Legge (Great Britain) will be joined by Stefan Wilson (Great Britain) in the No. 99 Porsche 911 GT3 R. This repeats the lineup of Daytona and Sebring. Legge won the class at The Glen in 2017.

Porsche is in third-place for Manufacturers in the GTD class, 48-points out of the lead.

Introduced at the season-opening Michelin Pilot Challenge race of the season, Daytona International Speedway, in January, the Porsche 718 Cayman GT4 RS Clubsport is the newest race car in worldwide competition. Based on the road-going Porsche 718 Cayman GT4 RS, the mid-engine machine makes approximately 500 HP in race form. Nine customer teams have entered the car for the 120 At The Glen in the GS class. Included is the Daytona pole-winning No. 8 McCann Racing car of Andrew Davis (Athens, Georgia) and Michael McMann (Canton, Ohio). Hardpoint has its Racing to End Alzheimer’s No. 22 Porsche 718 Cayman GT4 RS Clubsport at Watkins Glen in the hands of Sean McAlister (Beverly Hills, California) and Nick Galante (Greenfield, Massachusetts). The season-opening race winner, RS1, returns with the Stevan McAleer (Scotland) and Eric Filgueiras (Coca, Florida) again sharing the No. 28. Team TGM celebrates a milestone of 100 IMSA races for team principal Ted Giovanis (Highland, Maryland). Joined by Owen Trinkler (Nashville, Tennessee), the No. 64 charged to second-place at Daytona. They are joined in the TGM stable by the No. 46 of brothers Hugh and Matt Plumb (Unionville and Chadds Ford, Pennsylvania respectively). Kelly Moss will extend its Porsche customer effort into Pilot Challenge. The regular or Porsche one-make racing enters David Brule (Channing, Michigan) and Alec Udell (The Woodlands, Texas) in the No. 66. BGB Motorsport also is doing double-duty with two-time Six-Hour winner Spencer Pumpelly (Atlanta, Georgia) sharing the No. 83 with Thomas Collingwood (Canada). Collingwood will also race in the Pro-Am class of Carrera Cup North America. CarBahn with Peregrine Racing enters the No. 93 for Sameer Gandhi (San Francisco, California) and Tyler McQuarrie (Danville, California).

Porsche Carrera Cup North America sessions can be viewed live at www.PorscheCarreraCup.us and on the Peacock Streaming App.

“I’m looking forward to Watkins Glen. It’s been quite a few weeks now since our last race in Laguna Seca. Coming off the win and now into our third endurance race of the year, and a doubleheader as well going into Mosport the following weekend. We have the championship lead going and we’d like to retain that, but I think it’ll be a really tough weekend. It’s quite a different track to what we’ve been on in past events – it’s very fast and flowing. We’ll have to wait and see, but I’m looking forward to getting back to Pfaff and a doubleheader.”

“I’m looking forward to Watkins. It’s been a long break since Laguna Seca, so I definitely want to get back to the U.S. and race. It’s going to be a doubleheader with Mosport right after, so we’ll try to go to Watkins confident and defend our championship lead. Even though we maybe know it’s not the easiest track for us on the Porsche, we will try to execute the best like always and I’m sure if we have a clean race, we shouldn’t be too far at the end for a podium or maybe for the win. I’m looking forward to it and to see what we’ve got to fight up front.”

“I’m looking forward to having Zach back in the car and back to real endurance racing. It’s a track well-suited for the Porsche. We’ve always done well there. We’re looking forward to getting some points back after our runs at Mid-Ohio and Detroit. A podium would be nice, but we’re mostly looking at getting back in the points battles for the endurance and overall championships.”

“Watkins Glen has always been my favorite race track in North America. Nothing quite matches the feeling of putting in a quick lap around this place! Our team had a solid test here a few weeks ago, and I’m expecting us to bounce back after a couple of poor performances these past few events. I’m excited to have Zach back with us for this race, both he and Jan are coming back from strong drives at Le Mans, and I know they are both ready to fight hard for our team at the Glen.”