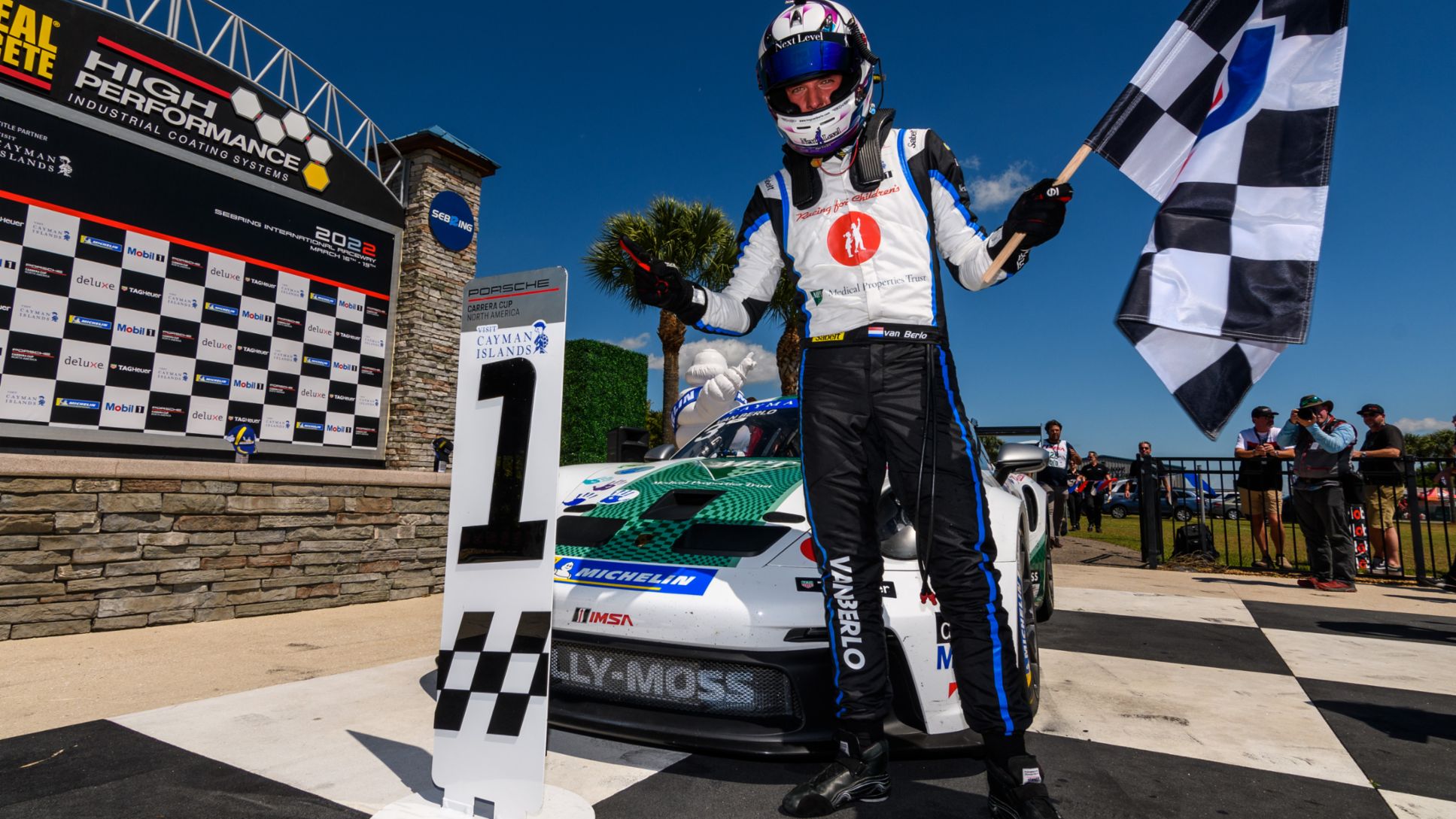 Kay van Berlo (Netherlands) successfully swept the first two rounds of the 16-race Porsche Carrera Cup North America Presented by the Cayman Islands season. The second-year Pro class driver of the No. 3 Kelly-Moss Road and Race Porsche 911 GT3 Cup race car charged from pole position to victory lane in both the 40-minute season-opening rounds today at Sebring International Raceway. Rookie driver Mark Kvamme (Columbus, Ohio) was also a green-to-checkered winner for the Am class in both rounds piloting the No. 43 MDK Motorsports Porsche. Kelly-Moss teammates Alan Metni (Austin, Texas) in the No. 99 and Efrin Castro (Dominican Republic) in the No. 65 split the Pro-Am class victories in Sebring, Florida on March 17.

The compressed two-day schedule was witness to twin, 40-minute races on Thursday. Despite hot, sunny conditions that saw temperatures near 90F, there were no yellow flag caution periods in either event. The pressure was hard at the front of the grid between Kelly-Moss teammates van Berlo – the 2021 Carrera Cup North America series runner-up – and Riley Dickinson (New Braunfels, Texas) in the No. 53 along with JDX Racing’s Parker Thompson (Canada) in the No. 9. The trio finished on the podium in both races with Thompson in second-place for Race 1, Dickinson moving to the second-step of the podium in Race 2.

Efrin Castro looked set to pick-up where he left-off last year when charged to the class championship against rival Alan Metni. The driver of the pink and black Porsche won the Pro-Am class pole position for both rounds and ran to perceived victories in each round. However, post-race inspection found a technical compliance issue with the No. 65 resulting in a disqualification for the first race. Metni was elevated to the Round 1 win followed by Justin Oakes (Houston, Texas) and Jeff Mosing (Austin, Texas). In Race 2, with the technical issue fixed, Castro did not miss any speed charging to a commanding lead from the start. He would take the win with Metni and Oakes close behind.

MDK Motorsports debuted in the Porsche Carrera Cup North America Presented by the Cayman Islands at the March 7 – 8 open test for all series cars. The first year-Carrera Cup team immediately set the standard in the Am class with Mark Kvamme earning the class podium top-step in both rounds on Thursday. In the morning race, Kvamme was followed across the line by Bob Mueller (Solana Beach, California) in the Octavio entry in second-place and Robert Hanley (Foxfield, Colorado) of JDX in third-place. Vernon McClure (Chesterfield, Virginia) and John Goetz (Weston, Connecticut) took second and third-place in Race 2.

With the clean sweep, van Berlo accumulated 55-points and leads the Pro class standings by 17 points over Dickinson and 18 ahead of Thompson. In the Pro-Am standings, the competition is tighter with Metni leaving Sebring with 45 points, 8 more than Oakes, 16 up on Mosing and 20 over Castro. In Am class, Kvamme holds 50-points,  21 points beyond McClure and Goetz, each with 29 markers.

Replays of both races can be found on Porsche Motorsport North America TV presented by Deluxe: (https://www.youtube.com/c/PorscheMotorsportNorthAmerica).

Rounds 3 and 4 of the Porsche Carrera Cup North America Presented by the Cayman Islands will be held at the grandfather of North American street courses: Long Beach. The Grand Prix of Long Beach will take place April 8 – 10.

“This is the strongest start of my career. Quickest in practice 1, practice 2, double pole in qualifying and then two wins. It couldn’t be any better. I am really happy with all the points. No crazy things this weekend. I couldn’t wish for a better weekend.

“The week was phenomenal. The car was great from the start. Unfortunately, in Race 1 there was a slight mistake. There was a part that wasn’t updated so I lost that win, but we recovered, and I won Race 2. I can’t be happier. The car was amazing. It was actually faster at the end. I can’t thank Kelly-Moss enough for the great job they do. Once the race weekend started, I felt like I was at home, and everything just came back. I had the speed, and they are taking me higher.”

“It has been a great day. The team did a fabulous job. We are a brand new team, first time on the grid. To get pole position and two firsts: that’s fantastic. We are going for the gold. I am loving the [Porsche 911 GT3 Cup type] 922. It is a great car. I’ve done a lot of single-make series and Porsche is the best. It is great competition, tight racing, good racing. The guys take it really seriously and I just love racing Porsches.”