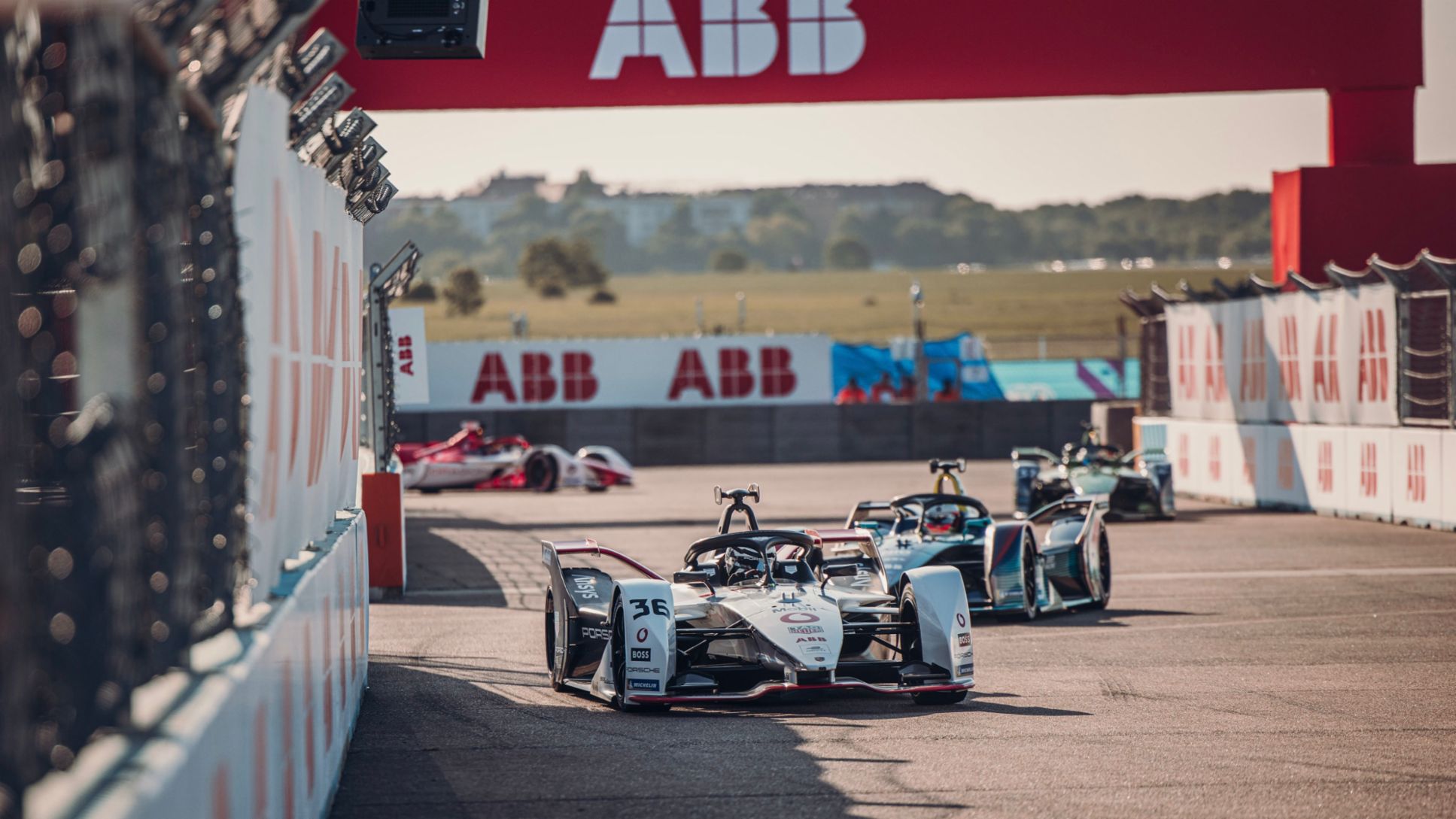 On the apron of the historic Tempelhof Airport, he took the flag in eighth place after narrowly missing out on a podium finish the day before. His teammate Pascal Wehrlein (GER/No. 94) finished 12th. In the drivers’ classification of the ABB FIA Formula E World Championship, André Lotterer ranks seventh after 8 of 16 races with 59 points. Pascal Wehrlein is eighth with 51 points. In the team classification, the TAG Heuer Porsche Formula E Team lies in fifth place with 110 points.

Starting the race from the fourth spot on the grid, André Lotterer got away well in the world’s first electric racing series. On the 2.355-kilometre Tempelhof Airport street course, he drove with the leading pack over a long stretch and at times was on course for a podium result. In the second half of the race, however, he lost contact with the frontrunners. Starting from 19th, Pascal Wehrlein drove a decent race. Launching a breathtaking charge through the field, he advanced to seventh place but ultimately crossed the line in 12th, missing out on earning points.

Comments on the Berlin E-Prix, Race 8

Florian Modlinger, Director Factory Motorsport Formula E: “Once again, André did very well in the qualifying. He’s the only driver to have made it into the duels at all races so far this season. That’s a great achievement. Pascal, however, didn’t feel comfortable in the car and was unable to build sufficient grip. This prevented him from achieving a better lap time. But considering he started from P19, he drove a solid race. André started the race from fourth and initially matched the pace of the leading group, even in attack mode. But as the race progressed, he lost contact with his rivals. We’ll analyse this in detail when we return to Weissach. We have some homework ahead of us and we’ll work hard to do better in the next races.”

André Lotterer, Porsche works driver (#36): “After the semi-final in qualifying, I’d hoped for a little more, but the race was tough. The car’s balance wasn’t ideal and that affected the efficiency. Consequently, I dropped from fourth to eighth. Race 7 yesterday went well so we now have to look at the reason behind this. On the positive side, I earned points in both races. We have a good basis for the second half of the season.”

Pascal Wehrlein, Porsche works driver (#94): “The qualifying didn’t go well for me, unfortunately. I lacked grip and the balance was off. Still, our race speed was okay and I managed to make up seven places but I couldn’t do more from this position. It’s a shame because we could’ve definitely taken a few points home.”

At the wheel of his Porsche 99X Electric, André Lotterer (GER/No. 36) clinched fourth place, narrowly missing out on a podium spot at round seven of the ABB FIA Formula E World Championship. His teammate Pascal Wehrlein (GER/No. 94) took the fastest race lap and was rewarded with an extra point. He crossed the finish line in sixth place. On Sunday, race 8 of the innovative electric racing series will be contested on the apron of the historic Tempelhof Airport.

In the drivers’ classification of the ABB FIA Formula E World Championship, André Lotterer ranks sixth after 7 of 16 races with 55 points. The TAG Heuer Porsche Formula E Team advanced to fifth place in the team classification with 106 points.

André Lotterer started race 7 on the 2.355-kilometre Tempelhof Airport Street Course from the fifth grid spot. At the wheel of his Porsche 99X Electric, he drove the entire distance among the leading group and even briefly led the field twice. In a dramatic final phase, Lotterer was only fractions of a second shy of a podium place. Starting from P6 on the grid, Pascal Wehrlein, the winner from the Mexico Formula E race this season, put in a solid performance in the second Porsche 99X Electric - he also maintained the pace of the frontrunners over long stretches. Along with his team mate, earned critical championship points today.

The next race for the TAG Heuer Porsche Formula E Team is the Jakarta E-Prix, round 9 of the ABB FIA Formula E World Championship on 4 June. 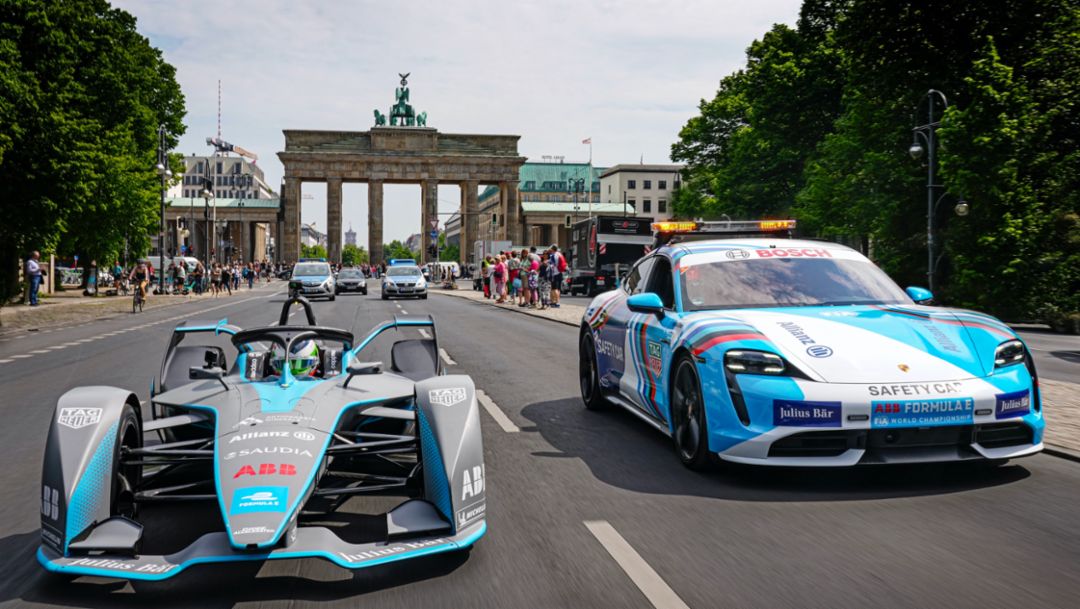 With the Porsche 99X Electric, Porsche returned to open-wheel single-seater racing in 2019 after 30 years. The fully-electric racing car sporting the Weissach-developed Porsche E Performance Powertrain also serves as a development platform for the sports car manufacturer’s fully-electric production models. Energy management and efficiency are important factors for success in Formula E and in the development of production cars. For the 2021/2022 season, the 99X Electric has a maximum output of 250 kW in qualification mode and 220 kW in normal race mode. Attack Mode boosts the output to 250 kW. Maximum recuperation is 250 kW; the usable battery capacity is 52 Kilowatt-hours.

With a historic one-two result thanks to Pascal Wehrlein and André Lotterer in the Porsche 99X Electric, the TAG Heuer Porsche Formula E Team celebrated its greatest success to date in Mexico on 12 February 2022. The team contests its third season in the world’s first all-electric racing series. At the debut event in November 2019, André Lotterer scored second place at the season-opening race in Diriyah: a dream start and proof that with the Porsche 99X Electric, Porsche had a competitive vehicle right from the outset. Last season, Wehrlein claimed pole position in Mexico City. Two podium results followed with Wehrlein finishing third in Rome and Lotterer securing second in Valencia. As an accelerator for innovative and sustainable mobility technologies, Formula E has brought thrilling motorsport to people living in major cities since 2014. With the all-electric Taycan, Porsche supplies the safety car this season, underlining the importance of Formula E for Porsche Motorsport.