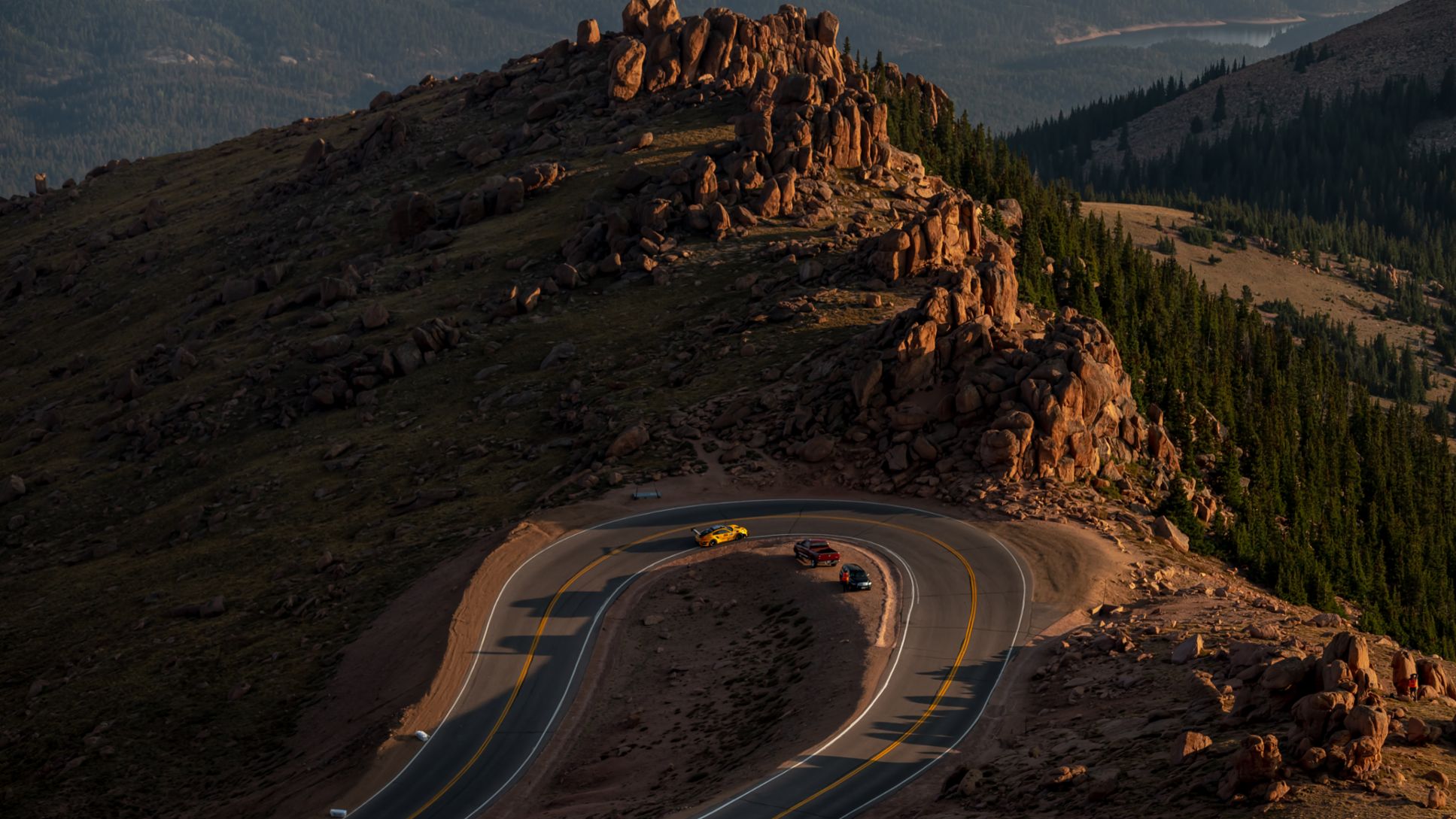 Porsche has been racing since its first vehicle rolled off the small assembly line and immediately went to a hill climb… and won. In 1958, the first Porsche came to the Pikes Peak International Hill Climb. In 1960, Robert Donner, Jr. drove a Porsche RSK to the sports car manufacturer’s first division win. In 2020, his son, David Donner (Colorado Springs, Colorado), raced a Porsche 911 GT2 RS Clubsport to the marque’s 29th victory with a time of nine-minutes, 36.559-seconds in the Time Attack 1 Division. On June 27, a baker’s dozen of Porsche privateers will challenge “America’s Mountain” in the 99th Running of Broadmoor Pikes Peak International Hill Climb, brought to you Gran Turismo, near Colorado Springs, Colorado spread across three divisions: Time Attack 1, Pikes Peak Open and the bespoke Porsche Pikes Peak Trophy by Yokohama. Pikes Peak is North America’s second oldest motorsport event, just behind the Indianapolis 500, and will celebrate its centennial edition in 2022.

The 12.42-mile, two-lane road winds over 156 turns as it climbs from its 9,390-foot starting line, up Pikes Peak to the finish at 14,115-feet. The all-time race record is seven-minutes, 57.148-seconds set by Porsche factory driver Roman Dumas (France) in 2018 driving the electric Volkswagen I.D. R Pikes Peak prototype race car. The current Time Attack 1 record for production-based cars is 9:23.721 established in 2019 by French rally racer Raphael Astier in a modified Porsche 911 GT3 Cup race car which had been fitted with a turbocharger. Travis Pastrana (Annapolis, Maryland) holds the Porsche Pikes Peak Trophy by Yokohama course record in a Porsche Cayman GT4 Clubsport at 10:33.897 set the first year of the division, 2018.

As it was in 2020, Porsche is in-line to challenge for the overall win when the race returns to its traditional date in June. Leading the effort will be Dumas who returns to Pikes Peak in a Porsche. As announced on February 15, the Frenchman will team with longtime dealer and motorsport partner Champion Porsche to field a 911 GT2 RS Clubsport in the popular livery of the Florida operation. While his all-time record may remain safe, the outright victory is within the grasp of the track-only variant of the road-going Porsche 911 GT2 RS. Major competition in the Time Attack 1 Division will come from David Donohue (West Chester, Pennsylvania) who was a leading contender in the BBi Autosport-prepared Porsche in 2020. A third Porsche 911 GT2 RS Clubsport – a twin-turbocharged machine capable of 700 Hp – has been entered by Germany’s Christoph Breuer. It will be his first attempt at the event which is also wildly popular in Europe and Asia. 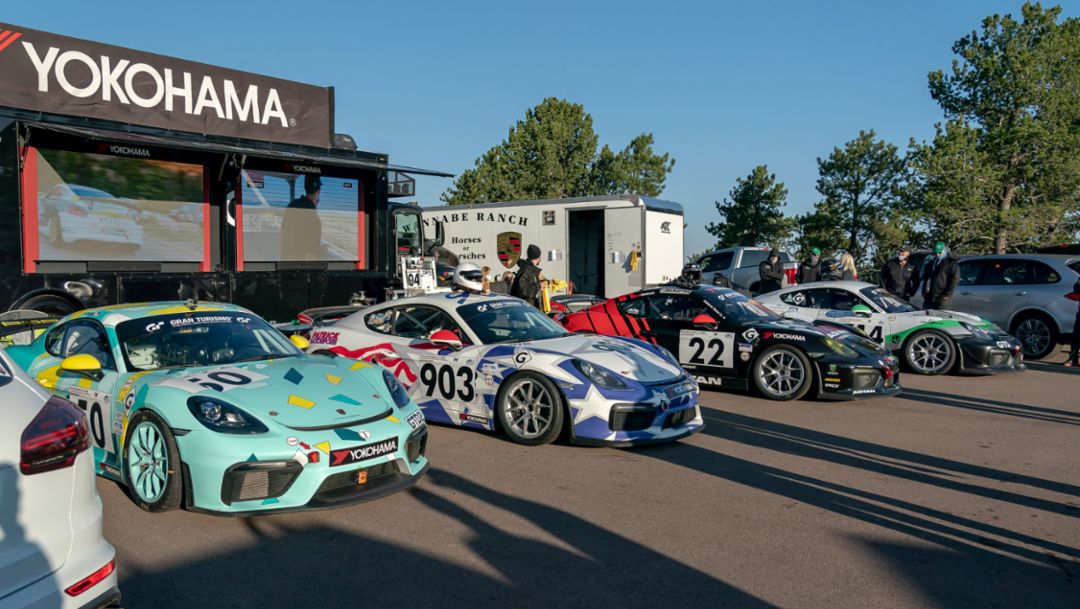 In its 98-runnings, the race up “America’s Mountain” has chosen a select few to call “winners”; and make no mistake, the mountain itself plays a major role in who is crowned champion each year.

Two more Europeans will travel to Colorado this summer with first-time aspirations in the Time Attack 1 Division with Porsche-built race cars. Laurent Millara (France) has entered a 2008 Porsche 911 GT3 while Steve Zimmer (Luxemburg) has modified his Porsche Cayman GT4 for the intense competition of Time Attack 1.

Five of the dozen Porsche entries in the “Race to the Clouds” come in the invitation-only one make division known as the Porsche Pikes Peak Trophy by Yokohama. Headlining the group of contenders, all racing the Porsche 718 Cayman GT4 Clubsport race cars, is veteran rally and stunt driver Tanner Foust (Newport Beach, California). Challenging Foust will be 2020 Rookie of the Year Kathryn Mead (Austin, Texas) who is making her second start in the Cayman race car after an impressive run that caught organizer’s and fan interest alike. Local George Hess is back for another attempt to sit atop the division standings as is Charles “Chas” Wirken (Mesa, Arizona). Cameron Ingram (Durham, North Carolina) is the fifth entry in the division. Ingram – whose Road Scholars is a longtime supporter of eight-time event winner and division coach Jeff Zwart (Aspen, Colorado/Long Beach, California) – is making his competition debut in the new mid-engine Porsche after intense preparations.

More information can be found at: ppihc.org/ .

Comments about the PPIHC

“The Pikes Peak Hill Climb’s heritage in North America, and the strong international following it has, continues to be an excellent venue to showcase Porsche strengths in competition. Power to weight is critical in a hill climb, as well as the tested durability of our motorsport cars. We have a few modified/shop-prepared Porsches as there has always been but with the introduction of the turn key Clubsport models, we have shown that Porsche has series produced models that are instantly competitive on the world stage. We are very happy with the mix of competitors who will be showing that the Porsche 718 Cayman GT4 Clubsport sets the bar for versatility and speed exactly as produced.”

“The excitement of our event is definitely elevated by the presence of Porsche on the mountain. The racing technology that Porsche presents, along with the top-tier drivers they attract, really takes competition to the next level. Combine that with their history on Pikes Peak, going back to the late 1950s, and the number of wins and records set over the years, and Porsche is undoubtedly a major player.”

“The Porsche Pikes Peak Trophy by Yokohama has become a classic race. Each year the competition is incredible. For Yokohama, it’s been a tremendous honor to combine our heritage on the mountain with our ongoing support of Porsche activities in North America, and we’re excited about this year’s Race to the Clouds.”