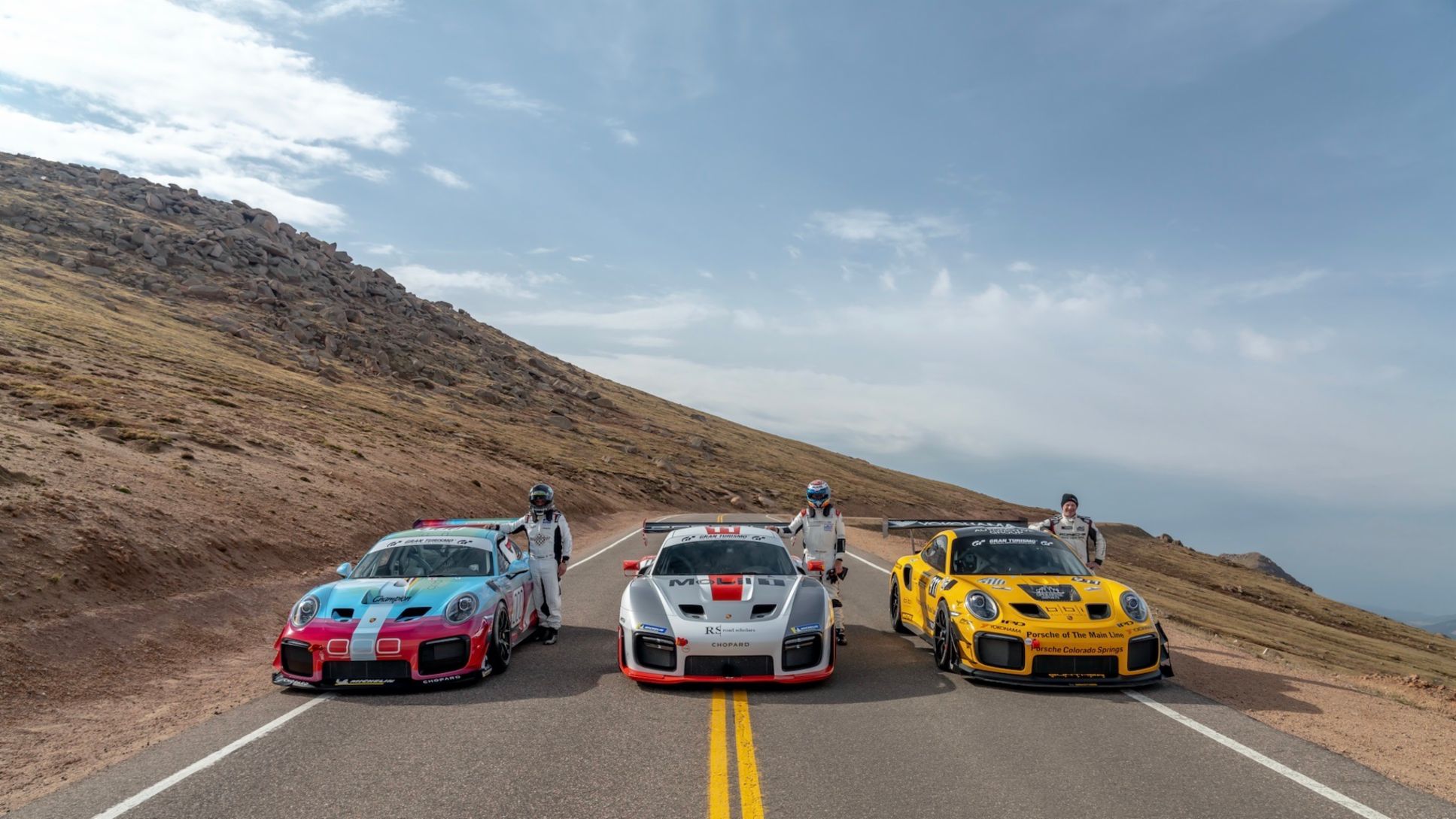 In its 98-runnings, the race up “America’s Mountain” has chosen a select few to call “winners”; and make no mistake, the mountain itself plays a major role in who is crowned champion each year.

Even entering the Pikes Peak International Hill Climb requires a special type of person. Recognized as one of the most dangerous motorsport events in North America, it is also viewed as one of its most eloquent. A mechanical and biological ballet that pits driver verse machine verse nature. In its 98-runnings, the race up “America’s Mountain” has chosen a select few to call “winners”; and make no mistake, the mountain itself plays a major role in who is crowned champion each year. It is a club reserved for a select few who can overcome Mother Nature, machinery and their own fears. In 2020, two Porsche drivers earned division titles in the “Race to the Clouds”: veteran David Donner (Colorado Springs, Colorado) added to one of the sport’s most prestigious resumes in a Porsche 911 GT2 RS Clubsport while motocross and X Games medalist Blake “Bilko” Williams (native of Australia now living in Murrieta, California) took the Porsche Pikes Peak Trophy by Yokohama in his first appearance on August 30. Porsche now has 29 victories at the Colorado Springs, Colorado-area event – including two overall wins.

The 12.42-mile, two-lane road snakes over 156 turns as it climbs from its 9,390-foot starting line to the finish at 14,115-feet. The all-time race record is seven-minutes, 57.148-seconds set by Porsche factory driver Roman Dumas (France) in 2018 driving the electric Volkswagen I.D. R Pikes Peak prototype race car. The current Time Attack 1 record for four-wheel drive, production-based cars is 9:23.721 established in 2019 by French rally racer Raphael Astier in a modified Porsche 911 GT3 Cup race car which had been fitted with a turbocharger. Travis Pastrana (Annapolis, Maryland) holds the Porsche Pikes Peak Trophy by Yokohama course record in a Porsche Cayman GT4 Clubsport at 10:33.897 set the first year of the division, 2018.

Despite being moved from its traditional early summer date to the end of August and a ban on spectators due to the worldwide pandemic, the 98th Running of the Broadmoor Pikes Peak International Hill Climb became one of the most exciting in recent memory. At the center of the story was a trio of Porsche 911 GT2 RS-based race cars, each manned by a Pikes Peak winner with deep ties to the German marque. Each looked capable of not only a Time Attack 1 Division win and record but possibly the overall “King of the Mountain” title for 2020 as well. While Donner’s time of 9:36.559 ultimately proved to be third-quickest behind two open wheel Pikes Peak specials, the local’s time was best of the nine cars entered in the class.

For the Time Attack Division winner, the COVID delay was a benefit. Put together in three weeks from concept to run, the No. 000 Porsche program didn’t even exist when the original race date passed. Donner is a three-time King of The Mountain having set the year’s best time in 1991, 2002 and 2005. The Coloradan’s link to Porsche dates back to his father, Robert, Jr., who piloted the legendary Porsche RSK to three victories (1959 – ’61) and an RS-61 to another division win in 1962. The livery that adorned the sleek aggressive lines of the “Triple Zero” 911 GT2 RS Clubsport was the brainchild of 000 Magazine creative director Justin Page. 000, pronounced triple-zero, is the Porsche-focused quarterly publication founded by Pete Stout.

A 2016 inductee into the Pikes Peak Hill Climb Museum Hall of Fame, Donner was one of two drivers allowed to carry the white windshield banner of a Hall of Fame member. The other was Jeff Zwart (Aspen, Colorado/Long Beach, California) who piloted the E-Motion Engineering-prepared No. 11 Mobil 1/Road Scholars Porsche 935-19 up to the finish line in a time of 9:43.921. Zwart’s effort in the Porsche 935 “Moby Dick”-inspired livery was good for second in class, fifth-place overall. The 935-19 is, at its heart, a Porsche 911 GT2 RS Clubsport with bodywork visually reminiscent of the legendary Porsche 935 GT prototypes of the late 1970s and early 1980s. Zwart set the fastest time of the day in the fourth and final sector of the course. Zwart is an eight-time winner of the event (1994-’98, 2002, 2010, 2015), all in Porsche 911 models.

Leading the pack for most of the week was former 24 Hours of Daytona overall and class winner David Donohue (West Chester, Pennsylvania) driving a Porsche 911 GT2 RS Clubsport. The past division-winner brought the track-only derivative of the turbocharged, flat-six road car to Pikes Peak tuned by veteran, record-holding BBi Autosport. His qualifying time on Friday, August 28 gave Donohue the best spot on the run order for Sunday morning. However, a long delay to remove ice at the finish line moved all competitors out of the prime time of the day when temperatures have warmed the surface but not given way to the afternoon heat. Donohue took the green flag 12th in line, directly after the four entrants of the one-make Porsche division. Despite having his first two sector times quicker than that Donner would put in, the bright yellow Porsche slide off the track and damaged the left-rear wheel too badly to continue. Donohue was not injured in the incident.

Four participants ran in the Porsche Pikes Peak Trophy by Yokohama Division. With each participant racing variants of the Porsche Cayman GT4 Clubsport, the competition was again intense. However, it was veteran “Bilko” Williams that set the pace for the one-make division in a car prepared by Nolasport. The New Orleans-based Porsche prep and race shop has extensive experience with the Porsche GT4-entry having commanded the SRO GT4 America series thus far in 2020. His lap of 10:52.622 was not enough to reset the Division record in its third year but it bested veteran George Hess III (Colorado Springs, Colorado) who ran a time of 11:06.789 in the No. 744 and Kathryn Mead (Austin, Texas) – the only woman in the race this year – who ran a 11:36.345 in the No. 50. Mead was uniquely honored as the “Rookie of the Year” for 2020. William’s red and black Yokohama-livered Cayman was also quicker than Charlie “Chas” Wirken’s No. 903. The Pikes Peak rookie raced up the Mountain in 11:55.228.

David Donner, Driver, No. 000 Porsche 911 GT2 RS Clubsport.
“It was typical ‘race day’ conditions on Pikes Peak: very slippery or loose with gravel from the previous night’s rain. I hadn’t been crossed up during any testing or practice but race day saw full corrections and excitement the entire run. This program was established less than three weeks ago and we won from good old fashion experience and professionalism with all involved. How remarkable is it to take a stock racing Porsche and run it up Pikes Peak And finish with such a fast time? Wow! What a huge accomplishment for 000 Magazine and all of our sponsors; Meguiar’s, Chopard, Champion Porsche, Michelin, Heuberger, Porsche Motorsport and many others… especially my family.”

Jeff Zwart, Driver, No. 11 Mobil 1/Road Scholars Porsche 935-19.
“It was an incredible week driving the 935 but race day is a different thing. You have to lay it on the line. I knew I hadn’t driven the first sector committed enough. I knew I had lost quite a bit of time so I kept pushing harder. The car kept feeling better and better. At the top, I pushed super, super hard. Joey Seely with E-Motion Engineering had given me an incredible setup that worked great everywhere on the Mountain but especially on the top and we set the fastest overall time on the day in the final sector. We came up short on time but we got a podium and top-five overall. It was a special day to have two Porsches in the top-five overall. It was very special to me to make an international debut for the 935. I am very proud of my team. The Michelin tires worked incredibly well and it was great to team up with long-term partner Mobil 1.”

Jeff Zwart, About the Porsche Pikes Peak Trophy.
“I was really proud of the competitors this year. Everybody really settled in and had a great run on the day. Not a single driver set a wheel wrong. Proud of Blake Williams for his run to the summit. It was a great group of drivers and we look forward to maintaining the momentum next year.”

Betim Berisha, Principal, BBi Autosport, No. 911 Porsche Colorado Springs-Porsche of The Main Line Porsche 911 GT2 RS Clubsport.
“We learned a lot. We showed our poise and our potential as a team. I want to thank the Porsche Motorsport crew as well as Porsche Colorado Springs, Porsche of The Main Line and our technical partners Yokohama Tire and Performance Friction Brakes for all the support. We will be back bigger and faster next year.” 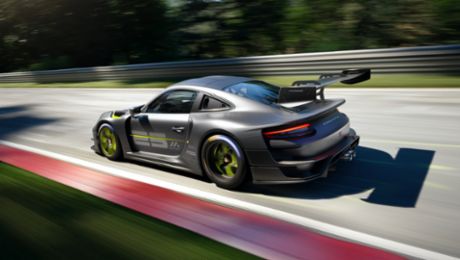 Porsche has set a new lap record for road-approved production cars on the 20.8-kilometer Nürburgring Nordschleife in a 911 GT2 RS fitted with the Manthey Performance Kit. 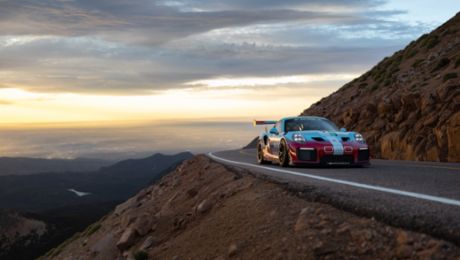