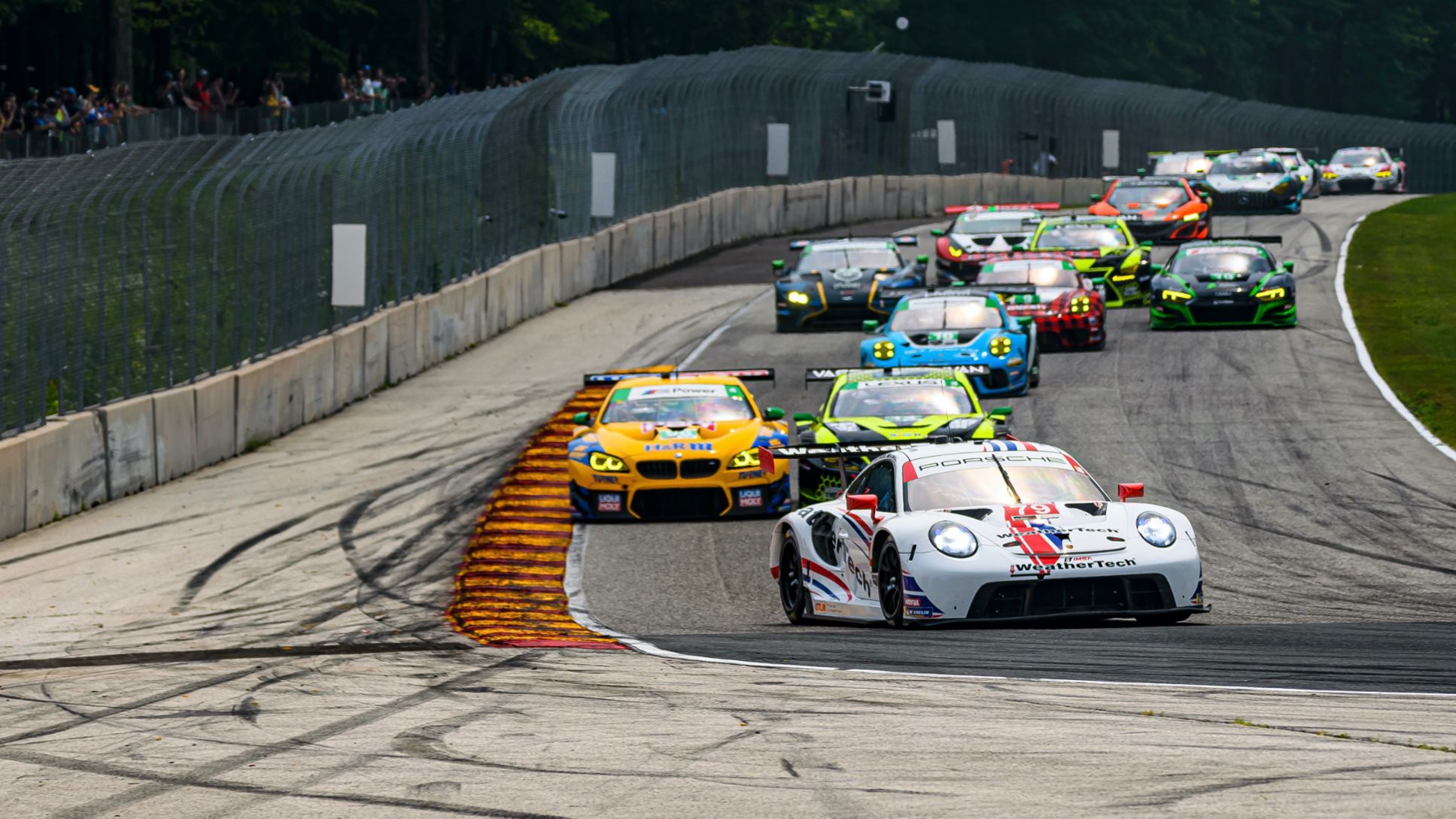 The outcome after the 160-minute race: First place with the 911 RSR in the GTLM category and a class win plus third in the GTD class with the 911 GT3 R. The race on the 6.515-kilometre Road America circuit in the US state of Wisconsin turned into a competition of efficiency: The 911 RSR fielded by WeatherTech Racing with Cooper MacNeil (USA) and the Australian works driver Matt Campbell as well as Pfaff Motorsports’ 911 GT3 R called on a bold two-stop strategy. In both cases, it led to success.

As the start driver, MacNeil managed to maintain contact with the two Corvette GTLM-class rivals. After a little over half an hour, he pitted to refuel under yellow and handed the 911 RSR off to Campbell. The 26-year-old continued to set fast lap times while keeping an eye on the fuel consumption of his Porsche. When one Corvette had to make an additional pit stop and the other was handed a drive-through penalty, Campbell snatched the lead and defended it to the chequered flag. This was his fourth IMSA victory – two at Road America and two this current season.

A similar scenario played out in the GTD class for the Porsche driven by the Canadian Zacharie Robichon and the Belgian works driver Laurens Vanthoor: The Porsche 911 GT3 R campaigned by Pfaff Motorsports came in for its first refuelling stop shortly before the first caution phase. When the race went green again, Robichon made a dash to first place. With 57 minutes to go, the car pitted for its second refuelling stop and Vanthoor took the wheel. The Belgian saw the flag almost twelve seconds ahead of his closest pursuer. Third in the GTD class went to Wright Motorsports’ Porsche crewed by works driver Patrick Long and his American compatriot Trent Hindman. Britain’s Katherine Legge and Rob Ferriol (USA) finished eighth in the GTD class with the 911 GT3 R run by the Hardpoint EBM squad.

Cooper MacNeil (Porsche 911 RSR, WeatherTech Racing #79): “This is a great victory for the team and it’s wonderful to win on our home track. The Proton Competition WeatherTech Racing Team did a great job over the race weekend in difficult weather conditions and made no mistakes. This gives us some strong momentum going into Le Mans next week and we want to continue this winning streak with Porsche at the 24-hour race. We have the chance to do this if we can stay out of trouble and are in the right place at the end – just like we were today.”

Matt Campbell (Porsche 911 RSR, WeatherTech Racing #79): “The race came down to the strategy and the fuel-saving between us and the Corvettes. In the end, the Proton guys made the right decision to stop when we did for fuel. At the time we thought maybe it was the wrong call. But obviously, it all worked out in the end.”

Zacharie Robichon (Porsche 911 GT3 R, Pfaff Motorsports #9): “All in all a fantastic race for our team. It started with a perfect strategy call to pit before the yellow, and then I got a good restart and was able to control the race from the front. A few brave passes were necessary but I knew the first two laps after the restart were going to be the key to the race. After this, it was all about saving fuel and getting the car in a good position for Laurens.”

Laurens Vanthoor (Porsche 911 GT3 R, Pfaff Motorsports #9): “After my mishap at the 24 Hours of Spa, it was wonderful to be able to even sit in the car at Road America. The weekend went perfectly. First place in the second part of the qualifying and victory in the race earned us maximum points – that’s good for the championship. We’d be happy to continue like this. I hope we win the title.”

Patrick Long (Porsche 911 GT3 R, Wright Motorsports #16): “I’m happy to get back onto the podium after a few rough races. It was a classic endurance race where track position, strategy and a flat-out last stint were required and it was a lot of fun. I’m proud to get the Wright colours back onto the podium and try and build on this momentum as we head to Laguna Seca on the west coast.”

Trent Hindman (Porsche 911 GT3 R, Wright Motorsports #16): “Patrick Long and the Wright Motorsports team did a really good job. As always, we had the speed and we finally had fortune in our favour this time. Big thanks to everyone for their hard work!”