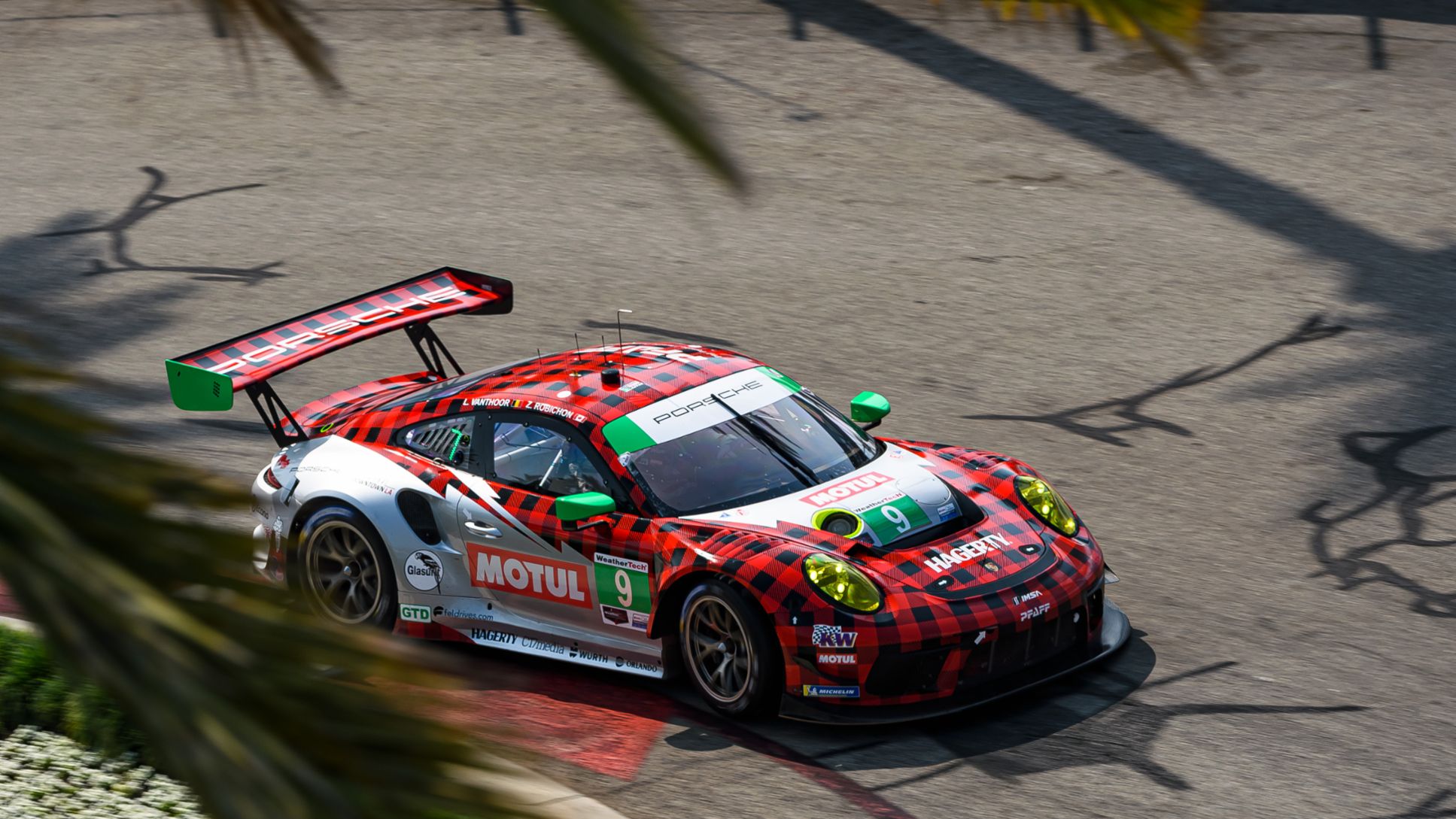 Event names rarely do justice to what unfolds on track. However, in the case of the Michelin GT Challenge At VIR, the title is a perfect representation of what the four Porsche customer race teams will face. The two-hour and 40-minute feature event on Saturday, October 9 at VIRginia International Raceway (VIR) is the second time of the 2021 IMSA WeatherTech SportsCar Championship season that the GT Le Mans (GTLM) and GT Daytona (GTD) cars will challenge for overall race victory. WeatherTech Racing will carry the banner of the German sports car maker at the Alton, Virginia-area track while Pfaff Motorsports, Wright Motorsports and Team Hardpoint target a GTD podium sweep.

VIR has traditionally been a strong track for Porsche with 21 victories to its name including the first IMSA-sanctioned event in 1971 (Hurley Haywood, Porsche 914/6). The German marque’s most recent victory came in 2019 as the Porsche 911 RSR of Nick Tandy and Patrick Pilet charged across the start-finish line for an overall win ahead of their teammates Laurens Vanthoor and Earl Bamber. Porsche enjoys seven IMSA race wins on the 3.27-mile, 18-turn road course since 2000. That ranks second among active manufacturers, one win off the record held by Chevrolet’s Corvette.

Few programs in the IMSA WeatherTech SportsCar Championship paddock are as strong as Pfaff Motorsports is right now. The No. 9 “Plaid Porsche” shared by factory driver Laurens Vanthoor (Belgium) and Porsche one-make veteran Zacharie Robichon (Canada) has three victories on the season in GTD (Sebring, Road America, WeatherTech Raceway Laguna Seca) and a second-place at the most recent round in Long Beach, California. Two-straight wins and a podium bring the popular Porsche 911 GT3 R to VIR with the class points lead of 32 markers over the Lamborghini driven by Bryan Sellers and Madison Snow. Pfaff Motorsports holds the same lead in the GTD Team title chase over Paul Miller Racing. Porsche has earned a 49-point lead in the GTD Manufacturers’ Championship ahead of Lamborghini with two races remaining. Both Vanthoor and Robichon have found success at VIR with each earning their respective class pole positions in 2019 – Vanthoor in GTLM with the Porsche 911 RSR and Robichon for GTD driving the Pfaff Porsche 911 GT3 R.

If any team can claim to be challenging Pfaff for consistently strong performances in the Pro-Am style GTD class, it is Wright Motorsports. The No. 16 Porsche 911 GT3 R race car of factory ace Patrick Long (Manhattan Beach, California) and Trent Hindman (West Long Branch, New Jersey) has chased their brand-mates under the checkered flag with three consecutive podium finishes. Long, the 2006 winner at VIR in a Porsche-powered Daytona Prototype, sits in fifth-place in the driver standings with a mathematical shot at the title. (-207 to Vanthoor/Robichon).

The third Porsche-built race car in the GTD field at VIR are the hometown favorites of Team Hardpoint. The No. 88 is co-driven by team owner Rob Ferriol (Fayetteville, North Carolina) and Katherine Legge (United Kingdom). The first-year Porsche customer team is based on the property of the track found on the Virginia-North Carolina border. Coming off a strong top-ten performance at Long Beach, Team Hardpoint is finding its rhythm with the rear-engine, naturally aspirated Porsche 911 GT3 R in heated year-end chase. Legge set the second-fastest race lap at the last round on the streets of Long Beach.

With the best chance to win an overall victory at VIRginia International Raceway is WeatherTech Racing in the GTLM class. The Proton Competition-managed operation fields the No. 79 Porsche 911 RSR-19 for Cooper MacNeil (Hinsdale, Illinois) and Porsche “works” driver Kévin Estre (France). The race marks Estre’s return to the WeatherTech Championship and the No. 79. Paired with MacNeil, Gianmaria Bruni (Italy) and Richard Lietz (Austria), Estre last raced at the season-opening Rolex 24 At Daytona in January. The WeatherTech Racing operation has two wins thus far in 2021: the Mobil 1 Twelve Hours of Sebring and Road America.

The GT cars not only get top-billing at VIR, but they also get the best television package of the season. The Michelin GT Challenge At VIR will race flag-to-flag with coverage airing on the NBC beginning at Noon ET, Saturday, October 9. In addition, IMSA Radio will offer live coverage on IMSA.tv and SiriusXM satellite radio at XM 202, Sirius/XM Internet 992.

In addition to its surging GTD-class entry, Wright Motorsports also brings the lone Porsche 718 Cayman GT4 Clubsport to the Michelin Pilot Challenge support event for GT4 cars. The Ohio-based operation is in third-place in the Team standings, as is its full-season driver Jan Heylen (Belgium), 80-points out of the lead for both. The John Wright-owned operation enters Heylen and Ryan Hardwick (Atlanta, Georgia) into the two-hour race on Sunday, October 10 behind the wheel of the No. 16 mid-engine Porsche. The Virginia Is For Racing Lovers Grand Prix will air live on NBC TrackPass beginning at 2:10 p.m. ET. It will re-air on NBCSN, Thursday, October 14 at 3:00 p.m. In addition, IMSA Radio will offer live coverage on IMSA.tv.

“I’m really pleased to go back to VIR. I did the IMSA GT race back in 2014. It didn’t go so well, but I really like the track. There is a lot of risk in a fast lap there, but with the good aero of the Porsche 911 RSR it makes it fun and fast for a driver. It is a short weekend, so we need to have error-free practice, good strategy in the race and we can come away with a result. We tested there in early September, but it was quite hot. The WeatherTech Porsche ran well, and we went through our program. I think it will be cooler for our race weekend. It was good to get some laps at the track after six-years.”

“I really like VIR. The last time I won there was in a Porsche, so maybe that is a good sign for us this weekend. When the car is dialed into the track, going through the esses uphill to the Oak Tree turn there’s nothing like it. The added horsepower of the RSR compared to what I’ve run there in the past will give me a slightly different feel of the track. Kevin and the Proton guys tested there a few weeks ago so we should unload with a pretty good WeatherTech Racing Porsche right away, which is good because this a two-day event with limited practice time.”

“I don’t think our approach will change at all. It is so close in points that every single point matters. We have been doing well lately. The danger is to start thinking differently. We just need to do our job like we normally do, and we will be fine. VIR is a track that I like so I am looking forward to that.”

“I am looking forward to being back at one of the most pure and unique circuits on the IMSA calendar. It’s a technical track for the driver and engineer to dial the car in, and tricky to pass on! The GT-only formula will lend a different tempo to the race, and I expect a very sprint natured two-hours and 40-minutes of racing. I am so proud of the effort this team has been putting out all season, and I can’t wait to get back out there and to continue the charge toward more podiums.”

“Name me a driver that doesn’t look forward to running at VIR every year? I don’t think that person exists. Most of the old school race tracks in North America are high speed and even higher commitment, but VIR takes it to another level in every aspect. All drivers love a racetrack where fortune still favors the brave.”

“I am really looking forward to the home stretch, figuratively and literally. VIR is the team’s home race, and Road Atlanta is my personal one. We have done a few miles of testing at VIR, so I feel more relative comfort and confidence going into this one. That, coupled with the fact the team, drivers, and car continue to get stronger each outing, gives us renewed excitement. I think the whole team are all buoyed by momentum going into the remaining two races. VIR is such a neat track, and I enjoy driving there very much. I have had some epic battles and some great results in the past and want nothing more than to repeat the same this year. Rob and I are still hungry for that elusive podium, and we will be pushing as hard as ever to get it here.”

“Wright Motorsports has had some great success at VIR in all series. We all love going to VIR. The big thing is the people. That is why we love going there. It is always a friendly environment. They do a great job of putting the event together and making everyone feel at home. That really separates VIR from some other places. It has to be at the very top of everybody’s list as a driver’s track. It is an old-school track with a little bit of everything: long straightaways, high-speed corners, good places to overtake. It has it all. It has always been a lot of fun with good action. The track promotes overtaking. We have two championships we are in the running for, so VIR is going to be a big race for us in both the Michelin Pilot Challenge as well as in WeatherTech GTD.”