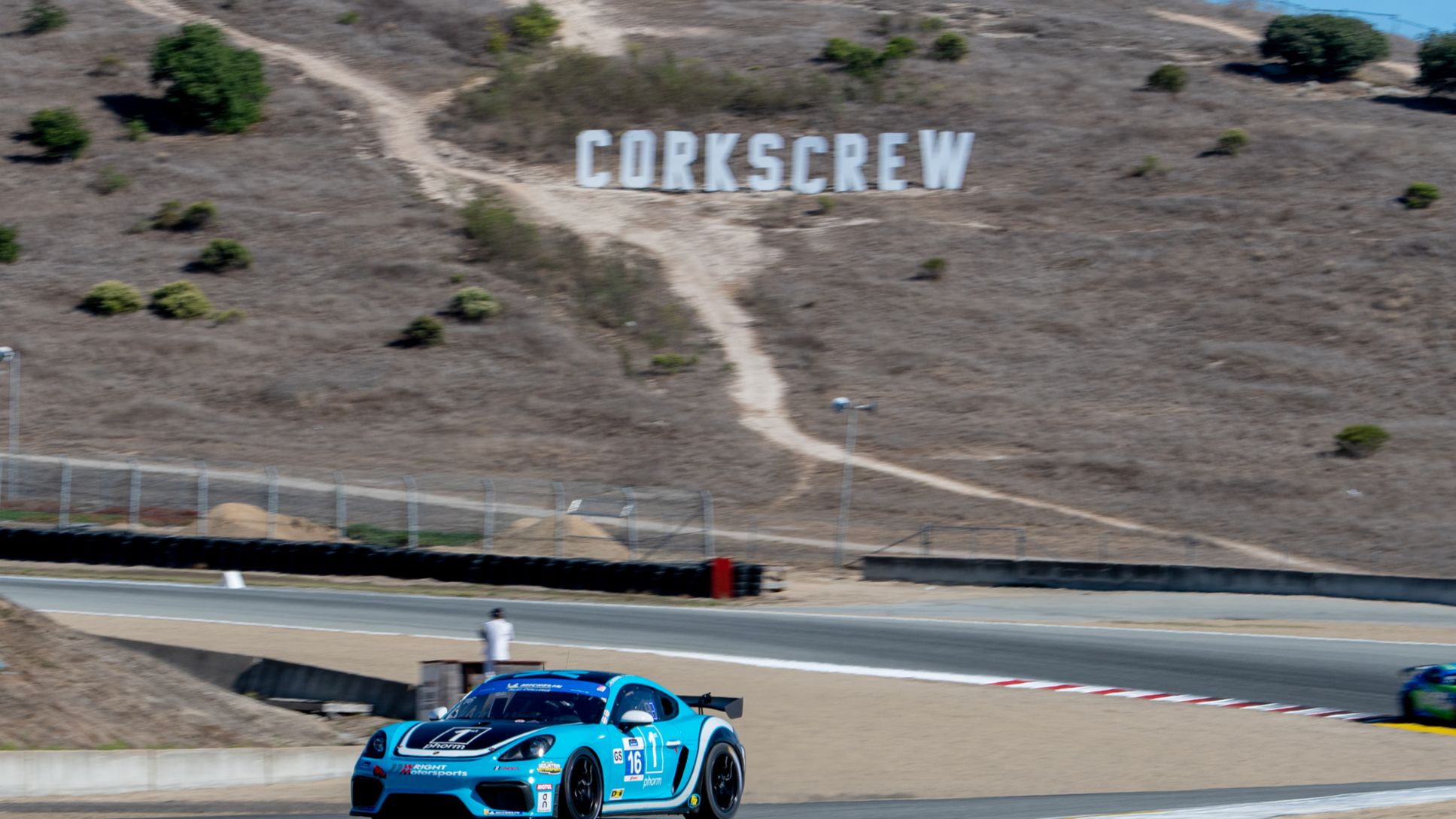 Porsche customer teams celebrated two victories, a pair of third-place finishes and a top-ten at WeatherTech Raceway Laguna Seca over the weekend.

Wright Motorsport opened the Monterey SportsCar Championship event racing a Porsche 718 Cayman GT4 Clubsport to victory in the Michelin Pilot Challenge on Saturday, September 11. In Sunday’s IMSA WeatherTech SportsCar Championship race it was Pfaff Motorsports who placed the “Plaid Porsche” 911 GT3 R race car on the top-step of the GTD class while Wright ran its No. 16 Porsche 911 GT3 R to a class third-place and Team Hardpoint raced to eighth-place in the No. 88. In the GTLM category WeatherTech Racing chased victory lane but finishing in third-place. The victories strengthened the championship aspirations for Pfaff Porsche in the WeatherTech championship and Wright Motorsports in the Michelin Pilot Challenge GS class ranks.

After a season of near-misses, Wright Motorsports earned its first Michelin Pilot Challenge victory of the season. Full season driver Jan Heylen (Belgium) teamed with Porsche Carrera Cup North America Presented by the Cayman Islands regular Max Root (San Diego, California) for only the second time of the season. Root showed why the Wright Motorsports team driver was a good fit earning the pole position and driving a seamless stint before handing it over to Heylen. The Belgian charged hard and secured the victory for the GT4-spec Porsche race car.

The IMSA WeatherTech SportsCar Championship will next run at the Grand Prix of Long Beach in California on September 24 – 25. The penultimate IMSA Michelin Pilot Challenge will come at VIRginia International Raceway, October 7 – 10.

Matt Campbell, Driver, No. 79 WeatherTech Racing Porsche 911 RSR-19.
“We were P3 in the end, so not too unhappy. We would have liked to have been in a position to fight with the Corvette cars a little bit more, but it wasn’t in the cards today. We can try to do that at Long Beach with Mathieu (Jaminet) in the WeatherTech Porsche. We couldn’t get a yellow at the right time to help us get in a position to fight later in the race.”

Cooper MacNeil, Driver, No. 79 WeatherTech Racing Porsche 911 RSR-19.
“We were strategizing for a late race caution that never came. It was a good race by the Corvette guys, their cars were super strong. Matt drove a good final stint. It was a decent points day for us. We will regroup and see what we can improve on the car for Long Beach which is a street course. We will keep chipping away at it for the next one and see what happens.”

Laurens Vanthoor, Driver, No. 9 Pfaff Motorsports Porsche 911 GT3 R.
“Super happy! Two in a row is perfect. We are in the roll. The car was very good on the long run, we could manage the tires. I have been feeling very comfortable in the car the last few races. We have dialed in a good setup. The goal is the championship.”

Zach Robichon, Driver, No. 9 Pfaff Motorsports Porsche 911 GT3 R.
“The team needs to take a lot of credit for this one. We recognized a problem and we fixed it. It feels great. We knew we could do it. At Lime Rock everything came back into place. This is what happens when you have a great group of guys. We are the sum of our parts.

Patrick Long, Driver, No. 16 Wright Motorsports Porsche 911 GT3 R.
“It was a super-challenging race and a game of tire strategy. We tried two different things in each of our two final stints and really found a great balance at the end. Unfortunately, we ran out of time to catch the No. 1 car ahead, and we had to settle for third. Great job by the team. I wish I had a little more for them today, but we’ll keep our head down and keep these podiums coming until the end of the year and see where we shake out.”

Trent Hindman, Driver, No. 16 Wright Motorsports Porsche 911 GT3 R.
“Obviously, we really wanted to convert qualifying to the same result in the race today. We just, unfortunately, came up a little short, and that’s okay. It was still a beautifully executed race by the Wright Motorsports guys. A big thanks to 1st Phorm, Mountain Motorsports, and Ryan Hardwick for all their support and making this happen. We have a couple of really good key points that we’ll work on going into Long Beach and be as equally as racey there.”

Rob Ferriol, Driver, No. 88 Team Hardpoint Porsche 911 GT3 R.
““In racing, lady luck always gets a vote and in my stint a lot of things happened ahead of me that I was able to take advantage of and gain some positions. There were a lot of positives from the team’s perspective, from a driver’s perspective. We got inside the top 10 again. I don’t think that reflects how much better we’ve done since the last time we came out, but that first stint was an indicator of being able to start to work our way to the front at the start rather than holding on at the rear.

“Katherine got in and was right there with the leaders in the last half hour of the race. I think that’s a testament not just to her driving, but that we’re starting to get this car in a competitive window. And that’s what we want.”

Michelin Pilot Challenge.
Jan Heylen, Driver, No.16 Wright Motorsports Porsche 718 Cayman GT4 Clubsport.
“It was a super race for the whole team and a big thank you goes to Ryan [Hardwick, regular team driver] for putting us out here even though he's missing the race. I can't say enough about his commitment to the program, and to pay him back with a win is just awesome. Max was our natural stand-in, and he did an awesome job like he did at Sebring. It’s great to have guys like Max on the program and to be able to give them a place when the opportunity comes. John Wright and Bobby Vigilone have put a lot of hard work into this program and it’s nice to see all the payoff. Max did a really good job qualifying on pole first, and then his first stint, he did great controlling the race. We won the race and the BMW lost some valuable points. Today put us back in the championship and couldn’t have gone any better. We’re ready for Ryan to come back and finish the season strong.”

Max Root, Driver, No.16 Wright Motorsports Porsche 718 Cayman GT4 Clubsport.
“It was a really interesting race. It was pretty easy on my stint. I kept it clean and kept the car up front. I was on the edge of my seat for Jan’s entire stint. I’m happy to finish up in first for the team, for Ryan Hardwick, 1st Phorm, and everyone involved.” 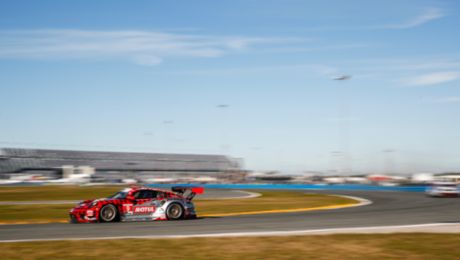 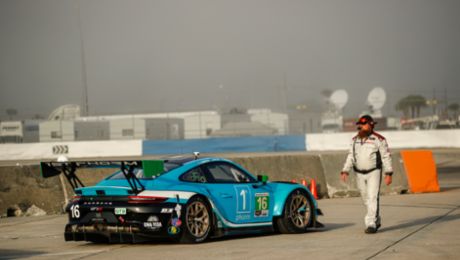 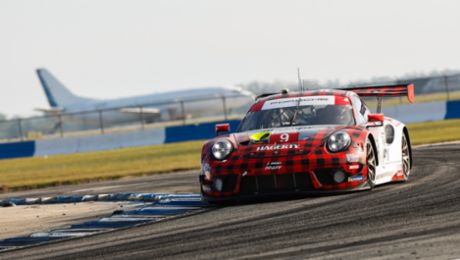