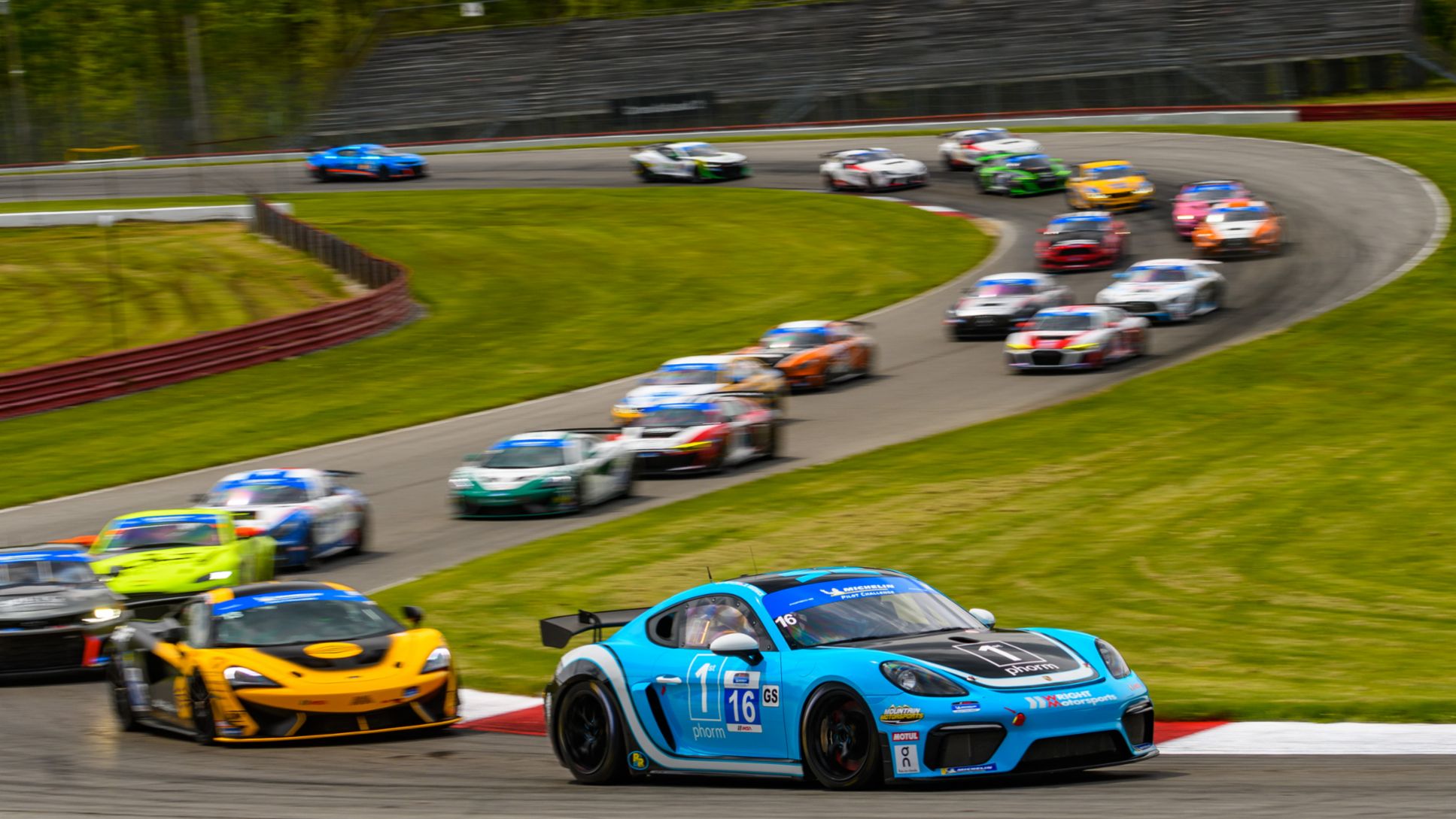 The IMSA sports car racing weekend at the Mid-Ohio Sports Car Course was a rollercoaster welcome back ride for Ryan Hardwick. The resident of Atlanta, Georgia – who had been forced out of the seat of both the Wright Motorsports-prepared Porsche 718 Cayman GT4 Clubsport and Porsche 911 GT3 R for the last two rounds as a result of a head-injury sustained in a practice accident at the Daytona International Speedway in January – returned to the driver’s seat May 14 – 16 after extensive rehabilitation. The Hardwick reunion came at an ideal venue as the Lexington, Ohio-area facility is the home track for the entrant of both his Porsche entries in the Michelin Pilot Challenge and WeatherTech SportsCar Championship, Wright Motorsports. The weekend was bittersweet with a second-place finish in the Mid-Ohio 120 Michelin Pilot Challenge race on Saturday but a heartbreaking 16th-place finish in the Sports Car Challenge WeatherTech GTD class on Sunday, May 16.

Saturday was the highlight for the Batavia, Ohio-based operation. With Hardwick earning his first career pole position in the Michelin Pilot Challenge GS class piloting the No. 16 Porsche Cayman 718 GT4 Clubsport. The start was the first for Hardwick in the support series having missed the Daytona round following his second hard impact of the weekend there. He brought the field down for a clean start on the 2.258-mile, 13-turn road course and held the lead for much of the early going. The No. 16 relinquished the top spot briefly but Hardwick recaptured it and pulled away from the field before turning the seat over to Porsche specialist Jan Heylen (Belgium). As the race cycled through, Heylen battled with the leaders again re-entering the top-three in the final 30-minutes of the two-hour race. The Belgian pushed the leading McLaren to the checkered flag but was not able to pass at the finish line. It was the second consecutive podium for Wright Motorsports in the Michelin Pilot Challenge. Heylen co-drove with Max Root (San Diego, California), who is a regular for the team in the Porsche Carrera Cup North America Presented by the Cayman Islands, to a second-place finish at the Sebring in March.

Sunday’s two-hour, 40-minute WeatherTech series event was the first sprint race of the 2021 season of North America’s top sports car racing series. With a new qualifying procedure in place, both Hardwick and Porsche Factory Driver Patrick Long (Manhattan Beach, California) would have 15-minutes behind the wheel of the No. 16 Porsche 911 GT3 R race car. Hardwick’s session would go first with his time setting the starting grid while Long would have a second session to earn points toward the championship. Hardwick’s lap would place the GT3-spec machine 22nd on the starting grid. It was Long’s run that electrified the crowd. The veteran Porsche pilot set the fastest lap of all the Pro-level drivers in the Pro-Am style class. The time did not advance the 510-Hp race car’s starting position but it did provide 35 vital points advancing the team’s lead in the championship.

Unfortunately, the highlights of the weekend would end at that point. While Long would charge the Wright machine into the top-five, the push toward a double-podium weekend would end when, fighting in a group of GTD cars, Long and fellow Porsche works driver Laurens Vanthoor (Belgium) in the No. 9 Pfaff Motorsports Porsche 911 GT3 R became entangled breaking the right-rear wheel on the No. 16. Vanthoor was able to continue but Long spun into the gravel trap on the front-straight. The blue, white and black Porsche would lose three laps waiting for extrication and a pit stop to repair the car. Long/Hardwick would finish in 12th in class.

Vanthoor and co-driver Zach Robichon (Canada) went on to finish in sixth-place, the highest Porsche in the race. The No. 88 Team Hardpoint EBM Porsche 911 GT3 R racer shared by Rob Ferriol (Fayetteville, North Carolina) and Katherine Legge (United Kingdom) raced cleanly throughout the day, finishing just outside of the top-10 in 11th-place.

The IMSA WeatherTech SportsCar Championship next travels to the Raceway on Belle Isle in Detroit, Michigan on June 12. The Michelin Pilot Challenge, WeatherTech Championship and Porsche Carrera Cup North America Presented by The Cayman Islands will join for the Six Hours of The Glen, June 24 – 27.

“We were biding our time with a car in front of us that seemed to be out of tires and unable to continue at pace. A chain reaction effect of some errors by the leading car meant that we had to check up, and we got hit from behind and broke our right rear wheel. At that point, the race was over for us. We soldiered on and got some points, not giving up. It was not our prettiest race, but it’s eyes up onto our test at Watkins Glen.”

“Wow! What a fun race, and what a great way to come back after my injury in Daytona. Getting the pole position was something I'll remember for the rest of my life. That was an unbelievable lap. It was a fun race at the start, but I just did not have the pace of that McLaren. So I settled into second and just tried to take care of the car and give the car Jan in a good condition for him to be able to make a push. If the race went for a couple more laps, I think it may have been a different outcome. But it was a great race. A lot of good points for our team in the championship and right yeah, I'm really looking forward to the rest of the season in this class.”

“That was a super fun race. I really enjoyed that. Ryan did a really good job on that first stint. All the way down to those last five laps or so it was a fuel race. So Ryan did a good job keeping the pace and saving a bit of fuel. Then we were on a slightly different strategy than the McLaren. Our strategy was right, that McLaren was just a little too fast for us on the straightaways today. Apart from that, it was just an awesome weekend, super fun out there racing with these guys. I really enjoyed it, and it was good points for the championship. It should put us in the hunt going into the next one.”

Following the third-round of the IMSA WeatherTech SportsCar Championship, Porsche maintains the lead in the GTD Manufacturer Point Standings. The three Porsche customer teams entered for the first sprint race of the season on Sunday, May 16 helped push the German marque to 999 collective points – the highest finishing entry for each car maker earns points. That places Porsche 36-markers ahead of fellow German make BMW – who got top points for the win at the Mid-Ohio Sports Car Course. Saturday’s qualifying lap for Patrick Long (Manhattan Beach, California) provided a buffer with pole position collecting 35 points. As the highest Porsche finisher in the race, the No. 9 Porsche 911 GT3 R race car of Pfaff Motorsport earned 250 points for sixth-place.

Wright Motorsports, who entered the weekend with the Team Championship lead, fell to third-place after a frustrating result of 12th in class in Sunday’s two-hour and 40-minute race. They now sit 46-points out of the top spot with 874 points just ahead of Pfaff who has collected 872 points. Team Hardpoint EBM (No. 88) sits in eighth-place with 731 points.

2021 IMSA point standings pay 350 to win and an additional 35 points for earning a pole position. 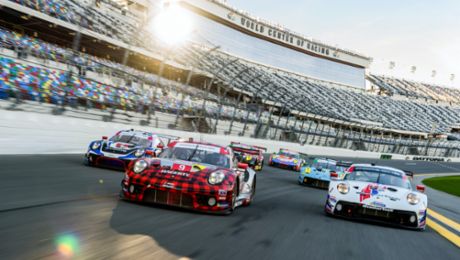 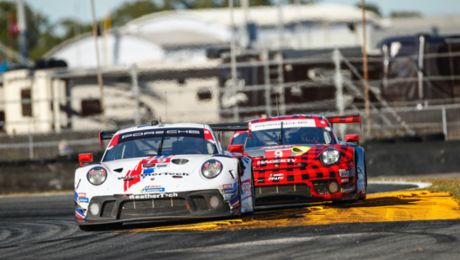 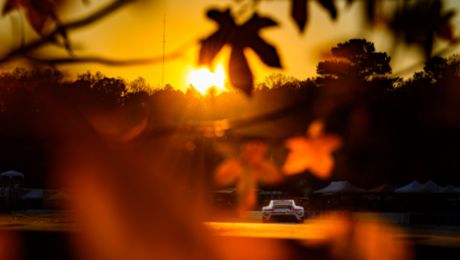 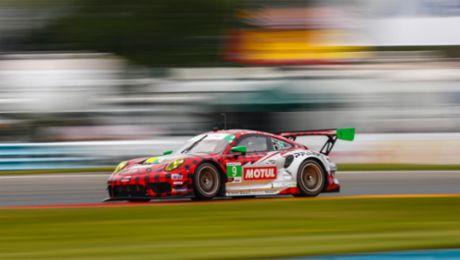