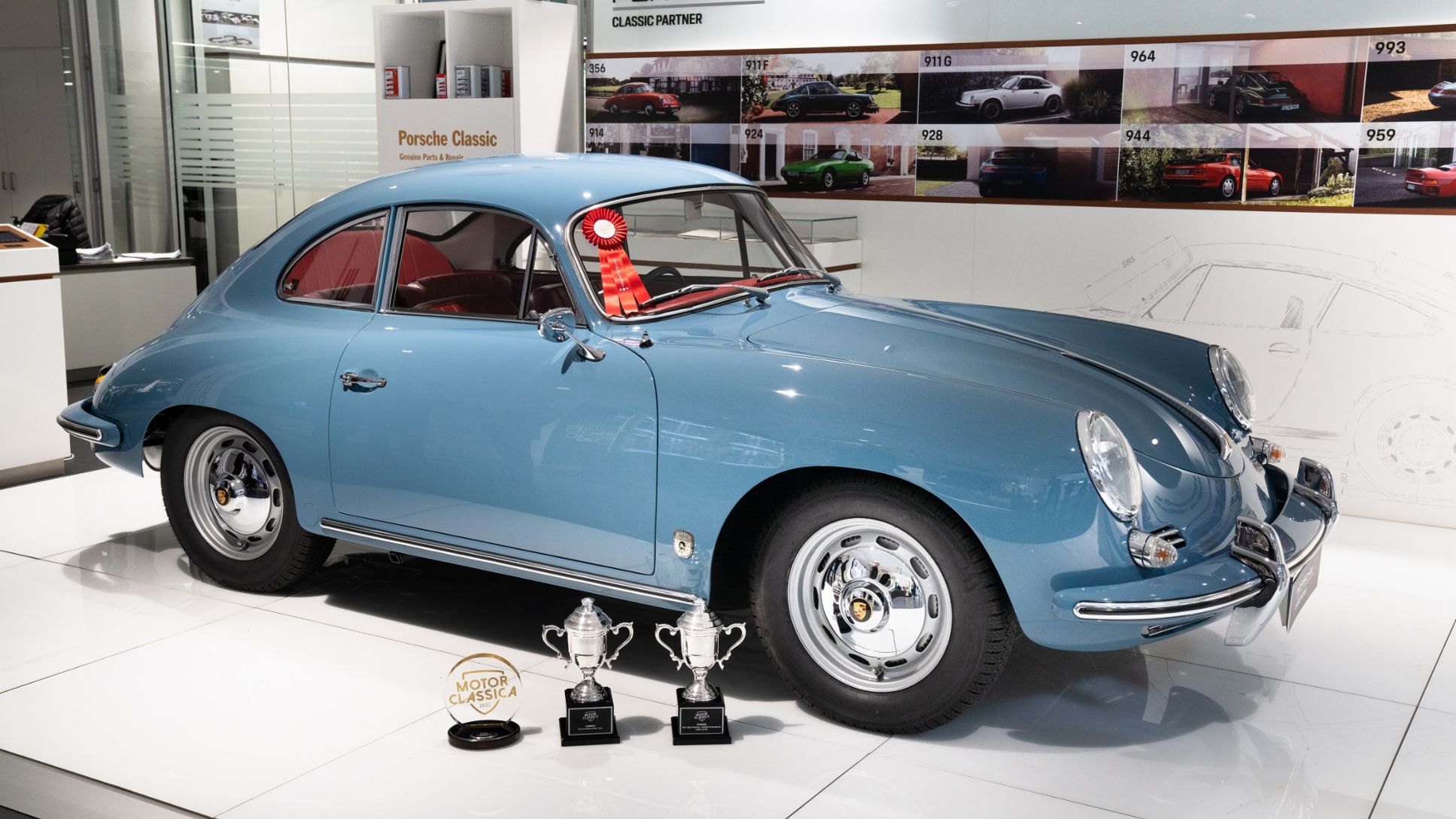 When a special classic Porsche scooped a trio of major awards at Motorclassica 2022, it was a rewarding moment for the team at Australia’s first Porsche Classic Partner, Porsche Centre Melbourne.

A 1961 Porsche 356 B has topped a collection of important categories at this year’s Motorclassica event, an annual three-day celebration of Australia’s finest classic, sports and racing cars held at Melbourne’s Royal Exhibition Building.

Along with winning the category for New Age Classics - British and European (1961-1970), the stunning Aetna Blue 356 B was also awarded Best Porsche as well as Restoration of the Year, only the second time a single car has taken out three awards. It was a prestigious acknowledgement of the skilled artisans behind this car’s return to its as-new state. Among them is Peter Bowen, Porsche Classic Specialist Technician at Porsche Centre Melbourne, Australia’s Porsche Classic Partner.

For Peter, a skilled technician with 38 years’ experience in motor racing and classic Porsche vehicles, the project was a labour of love.

He was responsible for the car’s mechanical restoration, which included bringing back its original 1600 cc engine and four-speed gearbox to an as-new condition, among many other projects. And, as is often the case with car restorations, there were plenty of headwinds.

“The first big challenge was much of the car was disassembled when we received it,” he says.

“Many of the assemblies were in pieces and there were boxes of parts, so we had to solve those puzzles first.”

Achieving this level of authenticity took time and care. It also took a vast amount of research.

Solving them was critical because there was an important fact hidden amongst the jumble of components.

“So much of the car was original,” Peter says, underlining the rarity of this Australian-delivered 356 B T5, which was sold new by Hamilton’s, Porsche’s original Australian importer.

“The body, engine, gearbox and window frames are all original. Even the window regulators, radio, instruments and steering wheel. They were all fitted to the car when it was new and they’ve all been meticulously restored, not replaced.

“This was important. The owners wanted to save every component possible; the goal wasn’t to replace parts but to restore everything we could.”

Achieving this level of authenticity took time and care. It also took a vast amount of research. For example, when it became evident replacement right-hand drive headlight lenses were needed, owners Theo and Niki Dimopoulos were adamant that originals be sourced. A thorough investigation resulted in Theo finding an original pair from a lady in Malta. Still brand-new from the 1960s, they were unwrapped in their original Genuine Porsche parts packaging.

Work commenced at Porsche Centre Melbourne in late 2019 and while Peter worked on the car’s exhaustive mechanical restoration, the body and upholstery were undergoing their own revival. By mid-2021 Peter’s work was almost complete, bringing with it one of the project’s most rewarding phases.

“The biggest joy for me was how well it drove when it was finished.

“We went the extra mile sourcing date-correct parts and restoring everything that was able to be restored, and that’s important on such a special classic Porsche.

“It’s wonderful to have the opportunity to work on cars like this. Seeing it complete, and how happy the owner is, makes it all rewarding. And to see the car being recognised with awards at Motorclassica is a bonus.”

“The biggest joy for me was how well it drove when it was finished." Peter Bowen - Porsche Classic Specialist Technician, Porsche Centre Melbourne

Porsche Centre Melbourne was awarded Porsche Classic Partner status in early 2017. It was the first Porsche Centre in Australia to be granted this honour, and is one of just 79 worldwide.