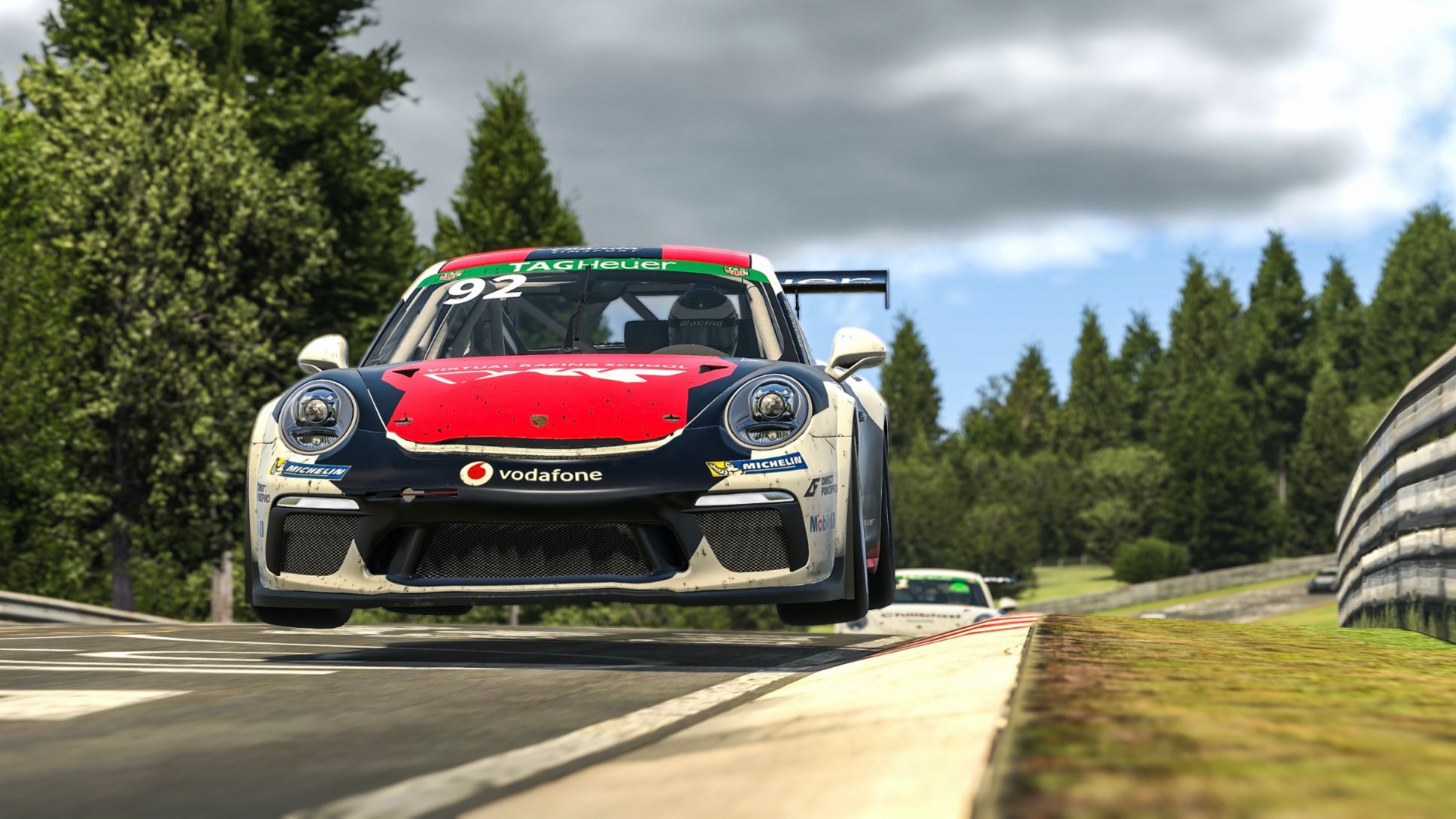 Scoring third in the sprint race and victory in the main event, the Australian expanded his series advantage in the overall standings to 127 points. The defending champion Sebastian Job from Red Bull Racing Esports won the sprint, only to lose valuable points in the fight for the driver’s crown with a retirement from the main race. The global Esports championship is run on the iRacing simulation platform.

In the qualifying, Rogers planted his digital Porsche 911 GT3 Cup on pole position for the fourth time this season. The 2019 champion relegated Dayne Warren (LEGO Technic Esports Team) and Sebastian Job to the second and third grid spots. The Australian also dominated the start of the three-lap sprint race. While Warren dropped from second to fifth place, Job waited in second place for his chance to strike. In the mid-field, a collision in the first corner reshuffled the order. One of the victims was Kevin Ellis Jr. from the Rahal Letterman Lanigan Esports squad. After the first lap, Job grabbed his chance, catapulted out of Rogers’ slipstream and into the lead. However, the British sim racer only managed a short stint at the front before Rogers made a counterattack at the end of the start-finish straight of the Grand Prix circuit and reclaimed the lead spot.

Behind the leading pair came Mitchell deJong (Virtual Racing School), Warren and the Frenchman Jeremy Bouteloup (Coanda Simsport). At the end of the second lap, Job and Rogers repeated an almost identical manoeuvre from the first lap. In the third and final lap, the decisive move was again made on the Döttinger Höhe, with Rogers relinquishing the lead. While Job overtook on the left, deJong also got past the Australian’s 911 GT3 Cup and snatched second place.

Again, the fastest eight in the sprint race tackled the main event over four laps in reverse order. Tommy Östgaard (Coanda Simsport) led the field in the first lap followed by Mack Bakkum (LEGO Technic Esports Team), Jeremy Bouteloup and Diogo Pinto (Williams Esports). Joshua Rogers and Sebastian Job launched a charge from positions seven and eight and quickly made up ground: Rogers turned onto the Nordschleife in fifth place. For Job, however, the race ended early: after the jump in the Pflanzgarten section, he lost power and rolled to a stop. Shortly after, Rogers passed three competitors in one fell swoop at the end of Döttinger Höhe. In a breathtaking move, the Australian swept from fourth to first place and held tight to that position to the flag. Behind him, Pinto gave arguably his best PESC performance to date. The Portuguese online racer beat Bouteloup and Östgaard to score second place.

In the overall classification, Joshua Rogers further extends his lead. With 515 points to his credit, he now holds a 127-point advantage over his teammate Mitchell deJong. Sebastian Job ranks third with 367 points.

In two weeks, the Porsche TAG Heuer Esports Supercup turns onto the finish straight: on 10 April, the Circuit de la Sarthe at Le Mans hosts the ninth and penultimate round of the season. On the revered circuit, the battle for the championship crown could be decided. The 13.63-kilometre racetrack with its long straights and challenging corner combinations offers the best conditions for gripping slipstream duels and overtaking manoeuvres.

Joshua Rogers (Australia/Virtual Racing School): “I knew that on the final straight the draft was very strong. Even when you have a massive pace advantage, you normally can’t break away. It’s all about putting yourself into the best position for the last lap. In the sprint, my strategy didn’t work as planned. My only option was to try and lose as few positions as possible. In the main race, it was a risky move to stay in front. It wasn’t planned in the beginning but I went for it. I’m ecstatic right now.”

Diogo Pinto (Portugal/Williams Esports): “The Nordschleife is good turf for me. Thanks to the reversed grid for the main race, I got a decent starting position. From there on, I tried to hold my ground, stay in the draft and wait for the final lap. I planned to stay second behind Joshua Rogers until then, however, Tommy Østgaard made a great move and overtook me. Going onto the final straight, I was too far away from Josh to challenge him for the win. Still, I’m really happy with P2. I’ve learned a lot since the start of this season. Finally, I was able to put it all together. Hopefully, next year I will be able to fight at the front more often.”

Tommy Östgaard (Norway/Coanda Simsport): “It was a great race. I was leading in the beginning and went into the final lap in second. The last corners were pretty spicy. Diogo did a good job to get P2. I’m pretty happy to be on the podium. I’m faster than last year but it’s not really showing in the results yet. I was a little bit unlucky in the first half of the season. Finally, pretty much everything went my way.”

The Nordschleife of the Nürburgring is one of the most demanding racetracks in the world – both in the real and digital terms. Featuring 73 corners, with inclines up to 17 per cent and descents reaching 11 per cent, the 20.832-kilometre course poses a real challenge for drivers. The tradition-steeped circuit in Germany’s hilly Eifel region is the venue for the eighth of ten rounds of this year’s global Esports championship run on the iRacing simulation platform. With more than 25 km per lap, it’s the longest track of the season. The gaming specialists will take on the combination of the Nordschleife and the 24-hour variant of the nearby Grand Prix circuit.

About a fortnight ago, the defending champion Sebastian Job from the Red Bull Racing Esports team rejoined the fight for the title: at Spa-Francorchamps, the Brit won both the sprint and the main race. The Belgian event ran less smoothly for his main rival, Joshua Rogers (Virtual Racing School): after becoming entangled in a collision, the Australian had to settle for 26th place in the sprint and 13th in the main event. Nevertheless, the 2019 champion retained his overall lead in the championship with 435 points. Sebastian Job ranks second with a 99-point gap behind the leader, closely followed by Mitchell deJong from the Virtual Racing School squad (331 points) and Kevin Ellis Jr. (Rahal Letterman Lanigan Esports) with 304 points.

#PESC – It’s crunch time in the Porsche @TAGHeuer Esports Supercup by @iRacing. Round #8 takes us to the @Nuerburgring. #GreenHell is waiting for reigning champion @G2Sebi and overall leader @JKRogers_92. Watch it live here: https://t.co/fT2QUkcmLA#NeverNotRacing pic.twitter.com/QndnMcakyc

At the Nürburgring, the PESC sim racers pit themselves against each other in a sprint race over three laps starting at 20:15 (CET) on Saturday, followed by a main event over four laps from 20:45. Round eight also includes a free practice, qualifying and warm-up session. Fans can watch the events live on Porsche’s channels YouTube and Twitch.

Beforehand, renowned content creators from the world of Esports will showcase their skills in a curtain-raiser. Like at Spa-Francorchamps, they fight for victory with the virtual Porsche 911 RSR GTE racing car. The live stream begins at 18:30 with the All-Star qualifying session. The two influencer races get the green light at 18:45 and 19:10 respectively. 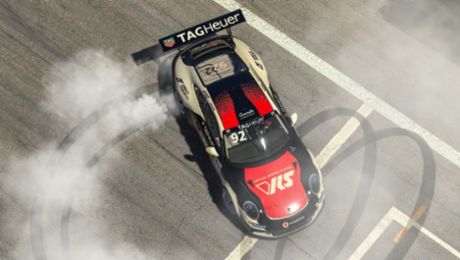 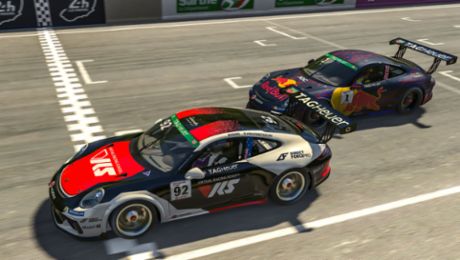 Clean sweep at Le Mans for Joshua Rogers: On the virtual Circuit des 24 Heures, the Australian set the fastest qualifying time and won both the sprint and main races. With this perfect result, the Virtual Racing School driver further extended his lead in the standings after the ninth of ten Porsche TAG Heuer Esports Supercup (PESC) rounds. 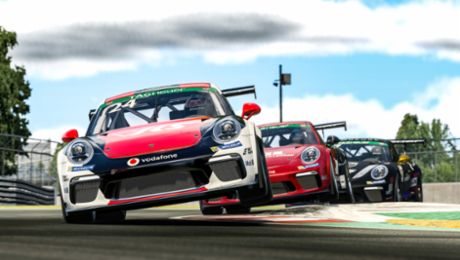