As a child, Oliver used to hear his father coming home long before he arrived. The family lived on a hill, with an 18 per cent gradient up to the house. When Hans Mezger had worked late at the office and his son was lying awake in bed, the young boy only needed the sound of the six-cylinder boxer engine to fall asleep. It was the engine that his father designed. “By the time he got up the hill, I would be asleep. My father worked a lot during the week, but Sundays were sacred family time,” remembers Oliver Mezger. Every now and then a Formula One race would fall on a Sunday, and on these occasions he would take his son to the racetrack with him. “My sister and I never felt like we were missing out. When our father was at home, he was always there for us,” he says. Hans Mezger was a very even-tempered and down-to-earth man and his children have many fond memories of his work at Porsche. “I found it incredibly exciting when he brought home analyses of test bench runs,” says the 57-year-old, who was also occasionally allowed to go to the test track in Weissach. “The teams were small – my father worked closely with 20 to 25 people and they were a close-knit crew. They don’t call it the ‘Porsche family’ for nothing. They were often still there in the evening, mulling over ideas.”

Hans Mezger was the absolute authority on engines at Porsche. He developed the air-cooled six-cylinder boxer engine of the 911 and the 12-cylinder 917 engine, which won at Le Mans. He took the turbo engine onto the racetrack and then into series production. Niki Lauda and Alain Prost became Formula One World Champions with his TAG Turbo. In October 1979, he bought himself a 911 Carrera 3.0 in Grand Prix White – a car that had been used as a test vehicle in Weissach. He kept it for the rest of his life.

As something of a thrifty company, in those days Porsche sold all the cars that had been used for testing. The same went for its rally cars, which sometimes changed hands straight after crossing the finish line. The 200 PS Carrera 3.0 was driven on public roads for the first time with a test vehicle registration plate in April 1977. It had 27,540 kilometres on the clock when Mezger bought it for DM 22,400 plus 13 per cent VAT. When it was handed over, it was given a new speedometer with the clock set to zero. Almost 40 years later, it had notched up another 10,601 km. In good weather, Hans Mezger regularly took his 911 Carrera 3.0 on outings in the vicinity of Stuttgart. One of his favourite excursions was to the lakeside stately home of Monrepos, where he used to stop for a cup of coffee. Because he always drove the latest model from the 911 series, he only covered a few hundred kilometres in his white Carrera 3.0 each year.

In October 2008, Mezger applied for a vintage registration plate for his 911. However, there were problems because the Porsche had been used as a test car in Weissach from April 1977, but a full certificate for regular registration hadn’t been issued until August 1979. This seemed strange to the technical inspection agency, and it initially refused to issue the plate. Klaus Bischof, Head of the Porsche Museum at the time, wrote a statement explaining the situation. He included the following in his letter: “Incidentally, Mr Hans Mezger is also the chief designer of the Porsche 911 engine.”

In one of the last interviews that he gave before his death, Mezger spoke about how he wanted to get his 911 back on the road soon. There were just a few minor things that needed fixing because the car had not been driven for a number of years. Sadly, Mezger never saw it happen. He passed away on 10 June 2020 at the age of 90. For the first anniversary of his death, his son Oliver had the 911 made roadworthy again. “The car will stay in the family’s hands and will be driven on special occasions. I’ll be visiting my father at the cemetery in it, and I’ll definitely be taking a trip to the Porsche Museum in his honour,” he says. “Maybe one day I’ll even drive it to Zell am See.”

The Porsche sound in Zell am See

The Mezger family used to drive to Zell am See every summer. The trip there in the 911, complete with its roof rack, was always the highlight of the holiday, Oliver Mezger recalls. “There’s a tunnel there now, but in the 1970s there was a huge wall of granite in Zell am See coming from the Saalfelden side,” he says. “The wall reflected and amplified the air-cooled Porsche sound so much that the interior of the car almost shook. I’ll never forget that.” It signalled to the children sitting on the foldaway back seats that they were only five minutes from their destination.

Oliver Mezger also has fond memories of his father’s 50-year-old watch, a Zodiac Astrographic SST with a transparent acrylic glass cover and hands that appear to be printed on the dial. The watch is inspired by space. “As a child, I wondered if it worked by magnetism. I’m still fascinated by it today. The hands float like spacecraft, the seconds are indicated by a red sphere, and it’s all designed to look like the movement of celestial bodies.” The watch was a gift from a sponsor of the CanAm race series in the 1970s. Porsche competed there in 1972 and 1973 with the 917/10 and 917/30 models, and Mezger’s team had succeeded in giving the turbocharger a response that allowed racing cars and production vehicles to be driven on all racetracks and public roads. This technology made Porsche a pioneer in the field and found its way onto the road in 1974 in the form of the 911 Turbo.

Oliver Mezger likes wearing the watch most of all when he is out in the Carrera 3.0 –  as well as bringing back many memories, it makes him feel close to his father, who, even a year after his death, remains ever-present. Many people talk about him, there are podcasts in which his voice can be heard, and videos in which he lectures. “It’s so much more vivid with memorabilia like that than without.” And there are also plenty of Porsche cars driving around with the Mezger sound. You can hear them in every corner – and most of all on hills with an 18 per cent gradient. 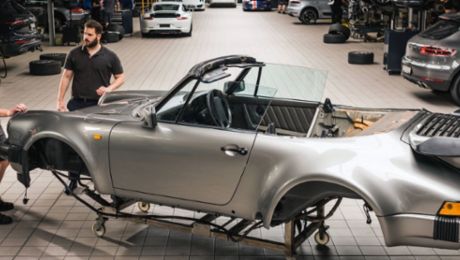 If you own a current model Porsche, you should also have a classic to keep it company. To meet growing demand, Australia’s only official Porsche Classic Partner is breathing new life into yesterday’s models.