Surrounded on all sides by snow-capped peaks and pristine ice as far as the eye can see, the Porsche Museum’s 953 is a long way from its natural habitat. Produced in 1984 to take on the infamous and arduous Paris-Dakar Rally, this was a car designed to endure extremes of heat and desert terrain the likes of which no Porsche had previously experienced.

The 953 used a 911 G model shell and near-standard 3.2-litre flat-six with a reduced compression ratio to better manage poor quality fuel. The real changes would be found underneath, centring around a new all-wheel drive system with 31:69 power distribution between the front and rear axles and a manually locking centre differential.

To cope with what would be a 14,000-kilometre marathon across some of the toughest and most inhospitable terrain on Earth, Porsche also increased wheel travel to 270 millimetres and fitted double-wishbone suspension with twin shock absorbers at the front and a reinforced axle with additional coil springs at the rear. The body was heavily reinforced with a welded steel roll cage, while the doors, roof, front fenders and all glass bar the windscreen where made of polycarbonate plastics to save weight.

To cope with the incredible distances covered each day on the Paris-Dakar, Porsche’s engineers also fitted a 120-litre fuel tank in the front luggage compartment with an additional 150-litre tank mounted behind the driver’s seat. French veterans of the rally, René Metge and his co-driver Dominique Lemoyne, took the radical new 911 to victory on its maiden outing, their success marking the first win for a sports car in the history of the Paris-Dakar. Teammates Jacky Ickx and Claude Brasseur fell back to 139th place following a cable fire, but even they managed to battle their way back up to sixth place at the flag, so quick and capable was the 953.

Today, almost 40 years later, another legend of Porsche’s Eighties rallying endeavours has been united with this remarkable car in its unfamiliar surroundings amid the Austrian alps at Zell am See. As the undisputed king of ice driving, Porsche brand ambassador and two-time former World rally Champion Walter Röhrl is the perfect partner for the 953 in a sub-zero setting, and he wastes no time in climbing aboard.

“Of course, you approach the car with a certain respect,” says Röhrl. “You know what it has achieved, what a success it has been. For a car fan it’s the greatest thing when you drive a car like that.” Finished in the trademark Rothmans livery, offset by white Fuchs alloys shod in vast, all-terrain tyres, the 953 is the quintessential rallying 911. Everywhere you look there are details that underline its absolute purity of purpose, from the underbody protection and mighty off-road mud flaps to aerodynamic motorsport wing mirrors and high taillights. And the theme continues inside as Röhrl straps himself into a spartan cockpit complete with lightweight bucket seats and multiple auxiliary rally instruments.

Within a single lap of the makeshift ice circuit, Röhrl has the 953 drifting on full opposite lock, his feet dancing across the pedal box with the same ease and precision that they did half a century ago when the young German was dominating the World Rally Championship. The unmistakeable sound of the unsilenced Boxer engine echoes around the empty valley, an aural calling card that Röhrl refers to has the ‘pinnacle’ for motorsport fans, but also as an elixir for professional racers. “It stimulates you,” he explains. “It spurs you on.”

Röhrl needs little extra encouragement today however, let loose in one of Porsche’s most unusual and important rallying creations, and he continues to pirouette around the ice field lap after lap, rooster tails of snow and ice rising in his wake.

“Porsche builds fine roads cars and wonderful cars for the track,” he says with a smile, “but they also make them for the most brutal terrain in the world. This car was made for the desert, but it’s still amazing how you can drive it on sheet ice. It’s addictive!” 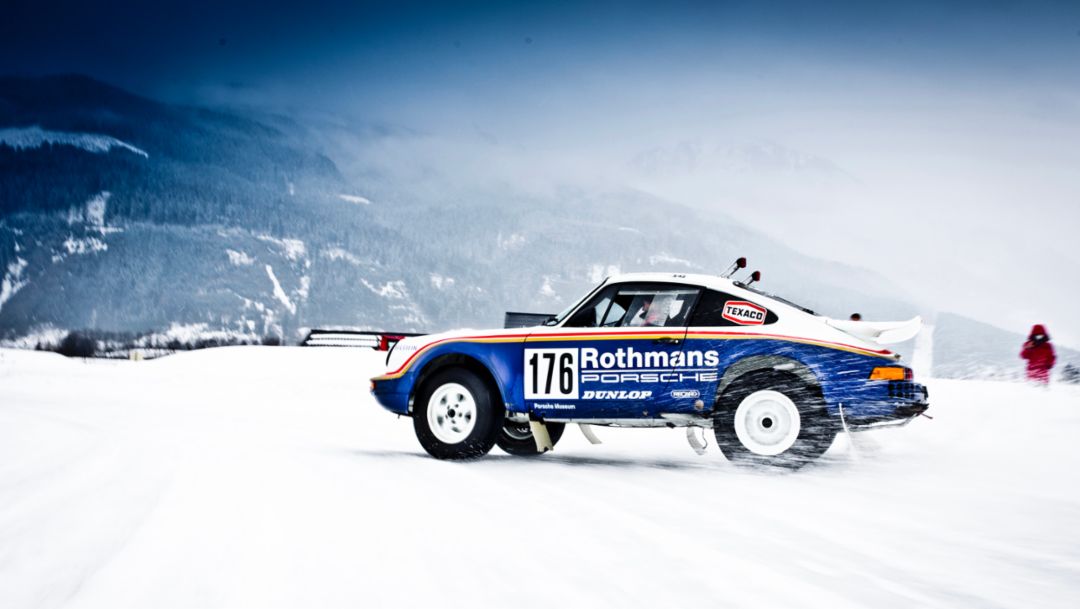 Adrenaline-fuelled racing festivals were held on Austria’s frozen Lake Zell in honour of Ferdinand Porsche for more than 20 years.