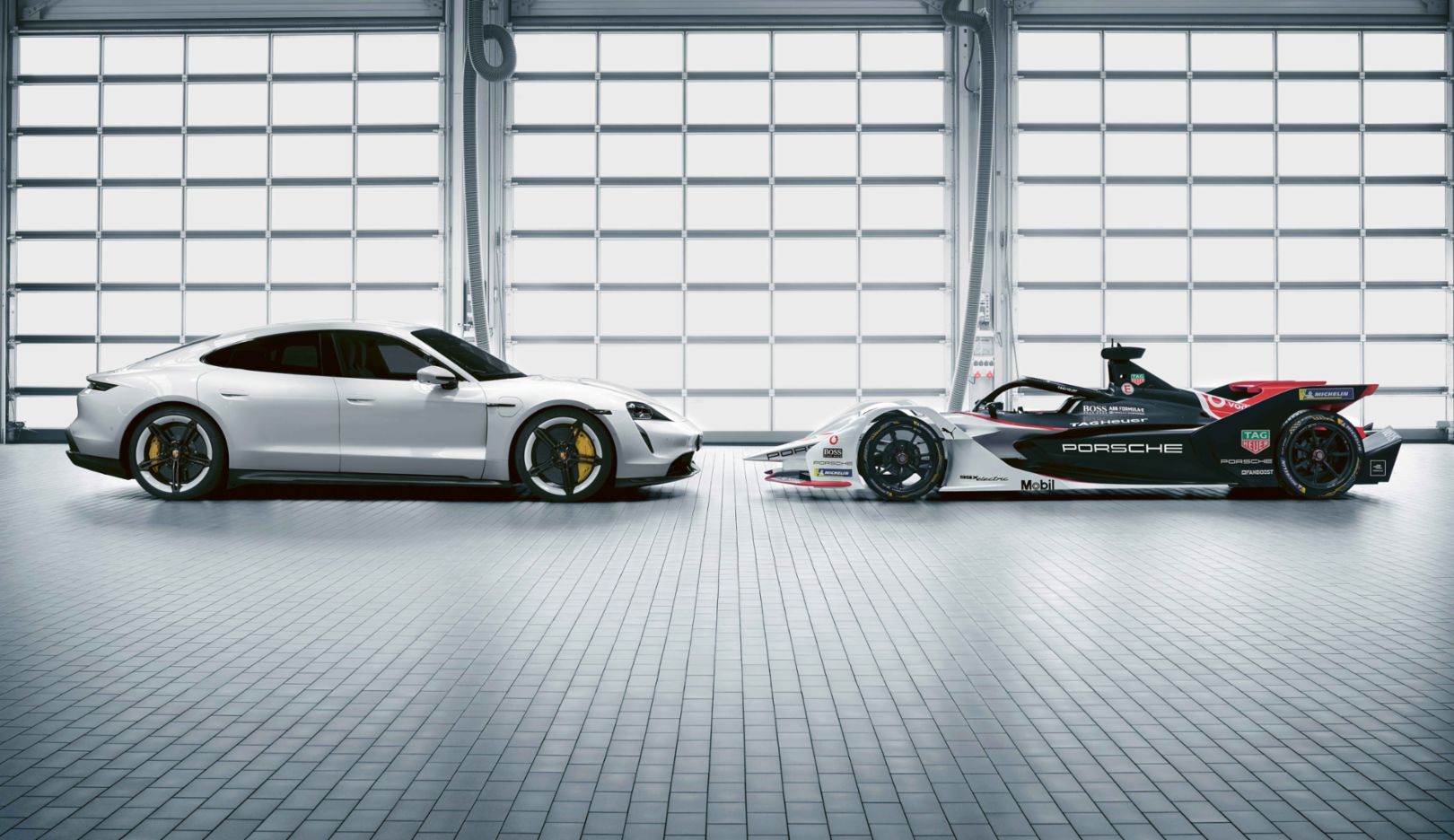 Technological innovations from motor sports have always carried over to series production designs at Porsche. This now also applies to Formula E, in which the TAG Heuer Porsche Formula E Team has been competing since last year.

It’s like stepping into a spaceship: the walls are white, the floors are spotless, the light is neon-bright. Orange cabling winds its way along, joining with a machine in the center of the room. The signal color is well-warranted: the cables carry 800 volts. We’re in the high-voltage test rig at the Porsche Development Center in Weissach, the place where Porsche tests electric motors. Right now, a special specimen is being put through its motions: the motor driving the Porsche 99X Electric, Porsche’s contender in Formula E since last year. The electric mover propels the black-red-and- white race car from 0 to 100 km/h in only 2.8 seconds.

Here on the test rig, the engineers are trying to improve the motor’s efficiency further still. To do so, they’re taking it through a sheer endless cycle of laps along a virtual race track, always subjecting it to acceleration and braking levels identical to real-world conditions. But the tests are not only meant to take the racer to victory. Porsche also intends to carry over as many innovations from motor racing to their regular production vehicles. “Our mission is to win races. But we’re also pursuing a smooth transition to series production,” explains Martin Füchtner, Senior Manager High-Voltage Drive Development, motorsports.

Advancing progress in electric mobility overall — a goal shared with the Formula E organizers. The racing formula is not designed to be an exclusive technology reserve, instead it intends to motivate series production innovation. Which makes it a totally different ball game from combustion-engine racing. The key difference is that all the teams have to use largely identical vehicles. Formula E specifies the vehicle chassis and standardized battery. All the powertrain components, on the other hand, are the teams’ own designs. This includes the electric motor, inverter, brake-by-wire system, transmission, differential, drive shafts, structural frame, and associated suspension elements on the rear axle as well as the cooling system and control unit.

“Our mission is to win races. But we’re also pursuing a smooth transition to series production.” Martin Füchtner

This way, the teams need to design fewer parts themselves, which levels the playing field for teams with lower funding. It also allows the engineers to focus on the actual electric drive instead of investing lots of money in expensive secondary issues like aerodynamics, for example.

Electric-drive expert Füchtner breaks down his mission: “We need to test the limits of what’s possible.” Right now, that means focusing especially on two components: electric motor and inverter. The electric motor converts alternating current into torque that drives the vehicle. Internal eddy current and conductance losses need to be minimized, and component weight reduced. Here, the team is benefiting from the fundamental research already pursued with the Le-Mans prototype (LMP), which explored new motor topologies and discovered new materials. “It’s awe-inspiring to see how massively we’ve pushed technology over recent years — drive systems with under five liters volume are now capable of producing the same power as a full-blown sportscar engine. And at efficiency rates we only dreamed of.”

But it’s not enough to optimize only a single component. It’s how integrated the powertrain is that’s key. This means that reducing the electric motor’s efficiency may make sense if it leads to benefits for the inverter. Or vice versa. It’s the end result that matters. The inverter partners with the electric motor by transforming the battery’s direct current into alternating current. It does so using a semiconductor element that switches many thousand times per second, with each switchover producing a small loss. Porsche is trying to reduce these step-by-step, a real high-tech challenge. Their attempts to identify the most efficient semiconductor for the switch lead the engineers to atomic scale. The latest prime contender in terms of material is silicon carbide (SiC), which in its pure form is very expensive.

The semiconductor compound silicon carbide is a particularly efficient switch — in racing and in series cars.

Another way to leverage electric drive efficiency is by adjusting the inverter’s switching pattern, meaning the way and the switching frequency. This pattern is governed by complex mathematical algorithms where even the minutest of changes can mean victory or defeat on the race track. “By going through numerous iterations of semiconductors and algorithms, we now have an exceptionally high system efficiency,” Füchtner tells us happily. In its efforts to advance inverter and motor, the team benefits greatly from its close association with the field of science. Many among the staff have just recently graduated from university and possess cutting-edge knowledge. “It never ceases to amaze how easily they handle the most complex subjects.” Füchtner is full of praise.

Innovations in series production that came from motor sports

Among the things that appeal to the junior talent is that the Porsche team maintains flat hierarchies. There’s a lot of leeway for trying things out, there’s next to no red tape getting in the way, and productive mistakes are allowed. At the same time, the junior engineers needn’t concern themselves with warranty issues or the advance scheduling involved in industrial realization. Without this kind of culture, major technology progress would be impossible within such short timeframes, Füchtner believes: “We’re like a start-up.”

Decision in favor of 800 volts

Motor sports innovations regularly benefit series production, too. A recent example: the Porsche Hybrid 919 claimed three constructor world championship titles and won three times at the 24 Hours of Le Mans in 2015, 2016, and 2017. The LMP’s crucial advantage was that it is able to store and supply energy very quickly. This was why the engineers chose an internal voltage of 800 volts over the otherwise common 400 volts. The experience gained on the race track — in particular with respect to the high levels of electromagnetic radiation—helped realize the series model. “The LMP supported our choice of 800 volts for the Taycan,” Füchtner says.

One day on the test rig is enough to complete all required test cycles.

The greatest overlap can be found in test rig technology. The rigs allow testing individual components under precisely controlled conditions without having to go out to the test track on real test drives. This saves a huge amount of time. “Completing the legally required test cycles using a real vehicle takes ten days. On the test rig, it takes us one day of work plus a night shift,” Christian Wiedenbrügge explains. He is team lead for software and calibration of battery electric vehicles.

Obviously, the various teams are all pursuing their own goals on the test rig. The racing team, for example, would simulate the Nürburgring’s Nordschleife to tailor a component for best lap time. Series designers, on the other hand, might choose a virtual day trip through the Black Forest in their quest to extend range. “But the methods are still the same,” Wiedenbrügge stresses. Both partners are also pushing the technology of the test benches forward. For instance, the racing team ended up refining specimen temperature adjustment because every tenth of a degree makes a difference in an electric drive. Series design contributed advances in automating test sequences.

Expert committees for internal exchange between racing and series production

But the test rig isn’t the only point of crossover in joint development of the electric drive. Porsche has set up in-house expert committees for certain components and has them meet every eight weeks or so. They pro- vide a panel for inverter specialists, for example, from series development and from motor racing to speak. It paid off. When the tech heads meet, many of them start off by saying: “We’ve something here you might want to see...” which is exactly what the idea was. Racing and series designers are meant to recognize their own struggles in what their counterparts are doing and to explore possible solutions together.

“Many on the Taycan team are former members of the team that previously developed the 918 Spyder.” Christian Wiedenbrügge

But perhaps even more significant is how technology transfers through the minds of people. “Many on the Taycan team are former members of the team that previously developed the 918 Spyder,” Wiedenbrügge shares. Team transfers like this are common practice at Porsche. This way, an expert in noise vibration harsh- ness engineering working in series development helped the motor racers get a handle on the electric race car’s vibrations. And that’s only one example. Being in the same area also plays an important part: Porsche’s Development Center is only about 1,000 meters away from the motor sports headquarters. “We all come in through the same gate, and we share meals meet for lunch,” Füchtner says and laughs. He knows that many a neat idea for winning the first Formula E race could be born in Weissach’s cafeteria.

Ideas for improvement are already piling up — not all of them, however, are viable just yet. “It would be great if the Formula E teams were also allowed to design their own batteries, too.” Füchtner firmly believes: “This is where we still have huge potential for advancing electric vehicles. We’re already in a pretty good place in terms of the drivetrain. But competing over batteries may hurt Formula E, because costs are very high. This would skew competition. We have therefore developed a lot of ideas to prevent that while still opening up the door for the development of cell technology by making it last an entire season. This way, it is usable for road car production and we have been able to further push the technology for our road cars.”

Motor racing and series production: crossing over between the two fields has a long tradition at Porsche. Electric vehicles are no exception. The Taycan thus benefits from experience gained with the Porsche 919 Hybrid. Joint expert committees guarantee that new ideas will continue to cross over between racing and series production teams in future. 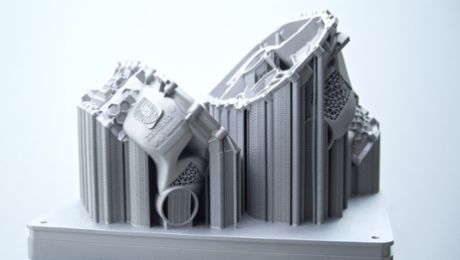 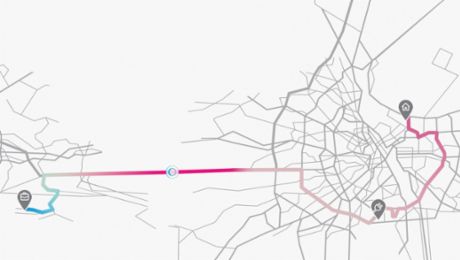