“Today’s racing car is tomorrow’s touring car,” is a statement that was once used to illustrate the effects of lessons learnt in racing, to make road cars better; more efficient, stronger, faster and safer.

Although the relevance of the statement has changed over the last 130 years, it held a lot of truth in the dawn of the modern car and in the development of the combustion engine as we know it.

Racing, and the rules that governed it internationally, evolved gradually from the early 1900’s through to the 1940’s, from which the 'modern' formula one began and consequently a host of other motor racing formulae that defined categories for competing purpose-built racing cars, and those that were adapted from series production models.

Through the fifties and sixties, the cars that one saw on the high street took part in racing events all over the world, on famous circuits and in rallying. The lessons learnt in competition duly applied to successive models that were then sold off the forecourts and showroom floors of manufacturers, but 'hot' versions were still a ways off.

At Porsche, the margin that stood between a production version and the racing version of any model had always been narrow – at the very least, far narrower than that of the competition. Upon the introduction of the 911, precious little was needed to take a standard car and go racing. So when the FIA instigated Group 4 rules, Porsche wanted to participate and it certainly wasn’t going to be a difficult bar for the 911 to meet.

When those rules were instigated in 1973, apart from the parameters governing the mechanical aspects of the car to be homologated, a minimum number of production versions had to be built and sold to the public. That number was 500, and the car with which Porsche planned to go racing was the now legendary 911 Carrera RS 2.7 – the car that gave birth to a line of special models that has continued to evolve like the more basic cars that they’re based on – RS.

The brilliance of the car and the consequent demand saw 1580 units built despite the requirement of just 500 – the die had been cast.

Standing back and observing an assembly of nine cars that represent the full evolution of the RS script, on an overcast Sydney morning in early March, with 16 enthusiastic owners and co-drivers, the adventure of taking this convoy to Melbourne via the South Coast and Gippsland, one can see poignantly how the evolution of eight generations of Porsche developing a road car to win races has manifested itself.

From the 2.7 Carrera and then the fearsome 3.0 RS (of which we have no remaining in Australia), via the absent SCRS of the early eighties (a model we didn’t get in Australia), the 'RS by another name', the 3.2 Carrera Clubsport and its spiritual successor in the type 964 RS and the exhilarating type 993 RS – the first four cars in the convoy carry the flag for early, air-cooled examples.

Engine capacity grew from 2.7 litres through 3.8 in the type 993. The latter was the visual template for what would come in later generations once the lessons of downforce and zero-lift were learnt. These cars had no electronic assistance in stability or traction control and certainly up to the 993, they were very nearly indistinguishable from the standard 911s they were based upon.

Enter the type 996 and the modern era. The 911 GT3 RS type 996 was a very significant step forward, upon which Weissach engineers used composites extensively, offered carbon ceramic brakes for the first time and demonstrated in the shape of the car that aerodynamics and downforce were now as much a consideration as an increase in output.

It would be in the 996’s successor that an RS-buyer would first be offered electronic driver-aids, as power outputs rose and aerodynamic lift was cancelled entirely.

Body composites and mechanical grip were increased as the 911 GT3 RS type 997, which was built into the same body shell as a 911 Carrera 4. The new design-language of Stuttgart being the widened rear track, wider rear rubber and wider body work to suit.

Be-winged and wide and finished in lurid colour schemes, the 997 RS in two series were ferocious, but could still be driven to work. The occupants remaining cool with air conditioning and finding their way with satellite navigation. It seemed as though, even if it had been the case all along, that Porsche managed to make “today’s racing car, today’s touring car” at the same time.

And so, as the type 997 ended – the racing fraternity and the car-buying public would expect new frontiers to be challenged.

When the type 991 was released it seemed Porsche had indeed done that yet again. Combining the use of composites to save weight, an increase in horsepower and a new raft of options to improve the car’s usability in touring, and indeed commuting.

The single biggest component came along in an RS that would again define it – the PDK transmission. An automatic gear box in a racing car? A gearbox that was the equal of the rest of the car’s intent; the quickest and most seamless changes known to a modern performance car, that also endowed it with an ease of use that no car of its ability can possibly hope to replicate.

“Today’s racing car, is today’s touring car” and as it was, 17 people comfortably arrived in Melbourne. The camaraderie that always results in a road convoy of sportscars was built, the drive all the more successful when the convoy is all-Porsche; also a 100% reliability rate across nine cars ranging 27 years.

The grandfather of the group, the Carrera RS 2.7, was delivered to Melbourne for a restoration that will see it returned to the configuration that it left Stuttgart,. That car will also race, with Porsche Centre Melbourne to assist in supplying parts, a task which it takes very seriously, part of its passion for keeping Porsche models of all ages at their best and on the road.

This road trip took place before the outbreak of COVID-19. Porsche Cars Australia and all participants involved in this production are aware of their social responsibilities and are advising against recreating such a trip until it is safe and travel is permitted. 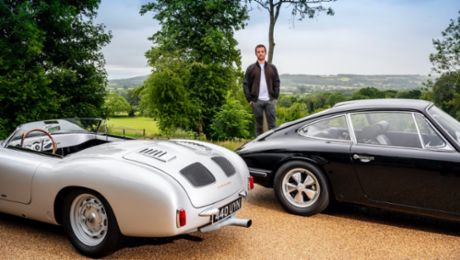 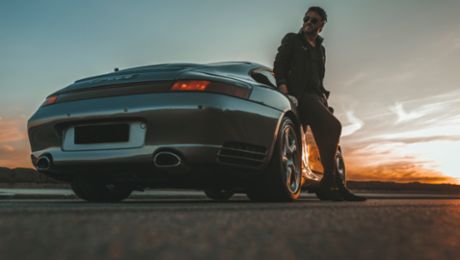 From Classic to Contemporary: Patrick Roberts and his 911 Carrera 4S

When he is not turning classics into contemporary masterpieces, Violinist Patrick Roberts enjoys exploring Melbourne in his 911 Carrera 4S (Type 996). 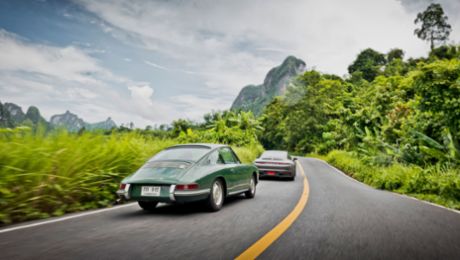