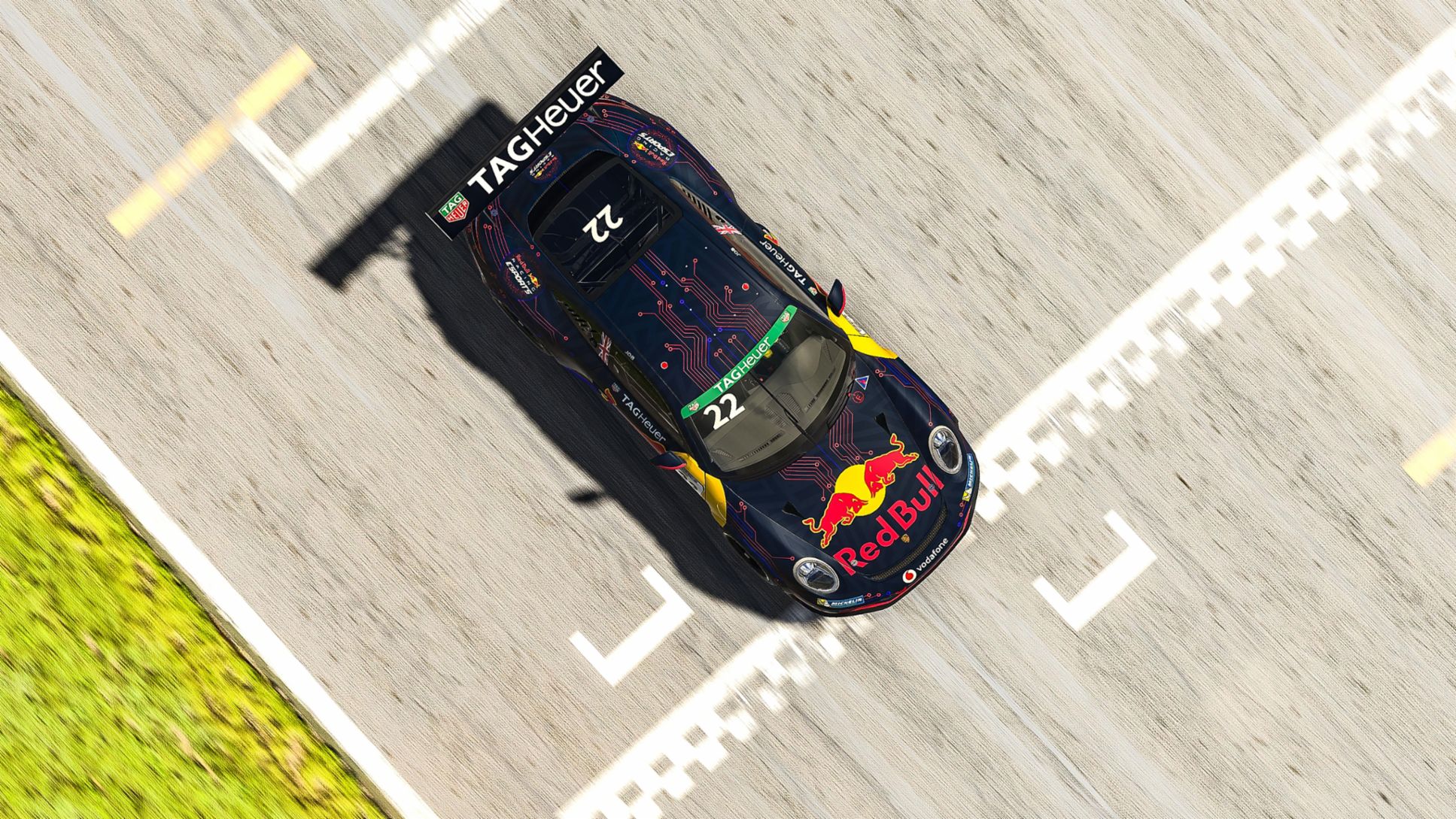 Double victory for Sebastian Job at round three of the 2020 Porsche TAG Heuer Esports Supercup: The British sim racer dominated the 38-strong field and won both races at his home event on the Donington Park Circuit.

The start of the 15-minute sprint race proved decisive. Taking up the race from the second grid spot, Job (Red Bull Racing Esports) squeezed past the leading Alejandro Sánchez (E/MSI eSports) in the second corner. The 20-year-old held his own at the top of the pack to take the flag first ahead of Sánchez. Behind the pair, viewers were treated to some gripping action: Ricardo Castro Ledo (P/VRS Coanda Simsport) and Barcelona-winner Maximilian Benecke (D/Team Redline) battled for third place. In lap eleven, Benecke finally made the decisive move and overtook the Portuguese. Rogers claimed fifth at the flag on the virtual racetrack southwest of Nottingham.

In the main race of the Porsche TAG Heuer Esports Supercup, Job celebrated a lights-to-flag victory. The sim racer from the Red Bull Racing Esports squad immediately pulled clear of his rivals after the start and thus avoided the fracas amongst his pursuers. “After experiencing a bit of bad luck in Barcelona, this double victory feels very great. My lap times were very consistent in both races, and that proved to be the key to success. Next up on the racing calendar is Le Mans. I’m very much looking forward to it, particularly the long straights and the slipstream duels that happen there,” said Job after the race day.

After a turbulent first lap, Sánchez, Rogers, Ledo and Tommy Østgaard (N/VRS Coanda Simsport) formed a quartet behind Job. The Spaniard Sánchez led the pursuing pack to the ninth lap only to have Rogers overtake the MSI-eSports driver on the inside. The 20-year-old defended his second place to the flag and was satisfied with his performance: “Today, it was very important for me to earn points. I’m really happy with how the main race played out. After overtaking Alejandro Sánchez and moving into second, I would’ve loved to have gone for the lead. But Sebastian Job was strong and drove fast, steady laps at the front.”

Finishing the main race on third, Sánchez claimed his second podium result of the day on the storied British racetrack. “I held on to second place for a long time with Joshua Rogers trailing me. He was around two-tenths of a second faster per lap, so it was only a matter of time before he overtook home. I fended him off for a few laps but then I had to let him pass. I’m in the top ten in the overall rankings and I’d like to stay there,” stated Sánchez. Østgaard finished on fourth place ahead of Ledo.

In the overall standings, Joshua Rogers (161 points) is the new series leader. While the esports racer from the Coanda Simsport is still waiting for his first win of the season, he has finished four of the six races in the top five. Sebastian Job ranks second overall with 155 points. Østgaard lies in third place, 20 points behind the Briton.

At the Donington Park Circuit, the sim racers will contest a 15-minute sprint race and a 30-minute main race. In addition to the two races, the schedule includes a free practice, a qualifying session and a warm-up. Fans can watch the event live on the Porsche channels Twitch and YouTube. The double-header event can also be viewed on these video platforms via iRacing. Further information on the Porsche TAG Heuer Esports Supercup can be found on the Porsche Motorsport Hub, Porsche Newsroom and the Twitter account @PorscheRaces.

The next Porsche TAG Heuer Esports Supercup double-header event will be contested on the virtual Circuit de la Sarthe at Le Mans. The legendary racetrack in the northwest of France hosts the fourth event of the 2020 global Porsche Esports Championship on 20 June.