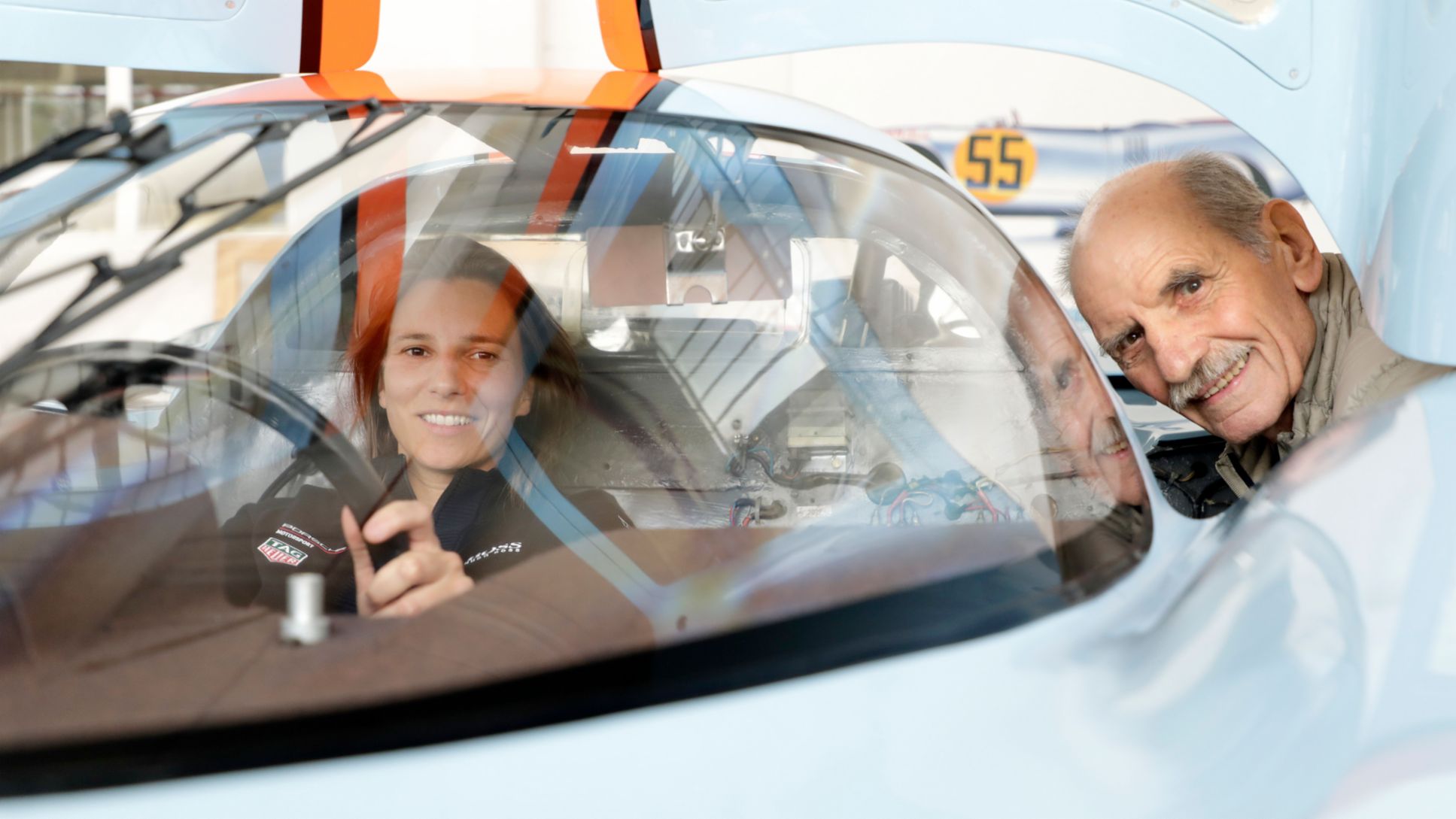 50 years ago: On 14 June 1970, Porsche achieved its first overall victory in the 24 Hours of Le Mans with the 917. At the wheel: Hans Herrmann and Richard Attwood. Test driver at the time: Günter Steckkönig – an old Porsche hand, technician, test and racing driver. Simona de Silvestro is also testing today, for the TAG Heuer Porsche Formula E team – and is therefore the first female Porsche works driver.

Two store employees roll a green-and-white Type 2708 CART from 1989 to where it can be seen in the best light. Teo Fabi drove the car, they say. Simona de Silvestro adds: “And he won with it at Mid-Ohio.” The men nod approvingly. The Swiss lady obviously knows her way around in the motorsports history of Porsche. And that is true above all for the IndyCar series. In 2010, she was named “Rookie of the Year” in the Indianapolis 500-Mile Race. She talks about the speed in the oval. “The average speed is more than 350 km/h in the four qualifying laps, and the top speed is around 380.” Günter Steckkönig interrupts immediately: “Do you always drive at full throttle?” A quick answer: “Always, at least in the qualifying race.”

Günter Steckkönig’s name does not appear in any of the lists of starters for an IndyCar race. “But I have driven this Porsche.” A wide, warm smile appears under his distinctive moustache: “I sneaked my way in, so to speak.” He recounts a story about test laps driven by a few automotive journalists with the single-seater at the new Nürburgring at the end of the 1980s. As the test day was drawing to a close in the evening, the test driver of many years was allowed to take his turn as well after some initial hesitation on the part of the team management. “You can also let him drive at night,” said the long-serving mechanics, putting in a good word with the team bosses on his behalf.

“Accelerator, clutch, brake. And when you know where the gears are, you can drive off with the 917” Günter Steckkönig

Before the Formula E races on many continents, the 31-year-old Swiss female driver spends whole days sitting in the simulator in Weissach alongside the two regular drivers André Lotterer and Neel Jan. Smiling, she says that it is just like being in a “great big Playstation”. She already has Formula E experience with a complete season in the second year of the series in 2015/2016. “There are huge differences between the cars then and those today. In the Generation 1 cars, electric motors were simply installed in existing race cars. The Generation 2 cars were developed for this series and are much faster,” she explains.

The 99X Electric is prepared to precision in Weissach for the race tracks. “In Formula E, everything takes place on one day, there is not much time left to set up the car or to get to know a new circuit.” Things were still very different then for Günter Steckkönig: “We often explored a new race track on foot or sometimes by bicycle. We drove the first few laps with the race car slowly until we had a really good feeling for the corners.”

In the simulator, it is about much more than just getting to know the race circuit. “We simulate all imaginable situations so that the drivers can take the right decisions in the race,” she explains as a modern-day racing driver. The focus here is on testing different software programs for efficient energy management. Simona de Silvestro explains: “The right amount of energy for the corresponding situation must be available at every second of the race.”

Her eyes already light up when she gets into a 917 KH in the Gulf livery from 1971. Günter Steckkönig kneels down beside the car, leans into the cockpit, and explains with a twinkle in his eye: “We have an accelerator pedal, a clutch, and a brake. If you also know where the gears are, you can drive off.” The modern-day racing driver counters: “In Formula E we have to study entire books in order to know how to operate the car and its energy management correctly.” She focuses her eyes far out to the front onto an imaginary straight. The top speed of the twelve-cylinder Porsche is around 360 km/h. She becomes serious: “Having an accident with this car would be quite awful.” Steckkönig: “You are right there. Years later it is hard to believe that we drove so fast with these cars.” The veteran remembers how the first 917 cars in 1969 became very light at the front on long straights due to the lack of downforce. “You could feel that it would not take much before you took off.”

As a technician, he knows very well why a race car behaves like this or that and knows its weaknesses. Simona de Silvestro can also explain how her race car works. “But not in detail,” she admits. Günter Steckkönig nods when he says: “A race driver should understand a little bit about the technology, and a technician should know something about racing.” That is also why he liked to take technicians with him on test drives. His reasoning: “They then really knew how important it is that all the screws are properly tightened.”

Simona de Silvestro also has experience in endurance racing, having competed in the 24 Hours of Daytona. She took part in the race in 2019 in an all-female team. Their car was in third place for a long time, until an accident robbed them of their chance of a place on the podium.

“That was quite a different experience. I had never had to share my car with others before. But it was really cool,” she says looking back. And nods approvingly when endurance specialist Steckkönig philosophises about the seat position. “Everybody must have a good sitting position in the race car so that they can concentrate on driving. That is why everyone had their own seat in our case.” This was produced by means of a plaster cast and the drivers exchanged their individual seat shells themselves at each changeover.

“When a woman changes to a new race series, she first has to prove herself. A successful man does not have to do that.” Simona de Silvestro

Steckkönig did plenty of test driving during the times of the great victories of the 917 with naturally-aspirated engine between 1969 and 1971. “Due to weaknesses in the wheel bearings and suspension bolts, we drove hundreds of laps on the skid pad in Weissach, and my neck was quite painful.” The high-mileage marathons on a washboard track with jump were also uncomfortable. A representative from the Italian competition once watched and commented drily: “The things that you do! Our car would never stand up to such loads.”

There was already also a kind of simulator for the 917. Steckkönig describes a roller test stand onto which the race cars were lashed and then completed the 24 hours as realistically as possible. There was a rotating disc in front of the driver. One revolution corresponded to a time of three and a half minutes, the usual lap time at Le Mans. The driver could read off what he had to do. One minute at full throttle at 8,000 rpm like on the six-kilometre long Mulsanne Straight, powerful braking before the corners, matching gear changes before and after. There were also driver and tyre changes during these 24 Hours of Weissach. After all, the tyres also became worn on the test stand. “Once I forgot my ear plugs and afterwards I could no longer hear anything,” says Steckkönig. Would he like to drive a few laps again with a 917 once more? A quick answer: “You bet!”

Günter Steckkönig: “I am particularly fond of this 908/03, it is fast, light and manoeuvrable like a go-kart.” The Porsche technician started three times in Le Mans, and finished in seventh place in 1976 with a 908/03 from the Joest Team. “Because we repeatedly had problems with the toothed belt for the fuel pump, I took it with me as a spare part. The belt actually tore. I changed it somewhere at the edge of the track. For me, seventh place was like a victory.”

His enthusiasm for motorsports had been awakened almost three decades previously when his father took him to the Solitude races in Stuttgart. On 15 April 1953, Günter Steckkönig started an apprenticeship as a car mechanic at Porsche, which was followed by a qualification as a technician. In 1962, the Swabian joined the test driving department. The Porsche employee obtained his racing license by racing privately with a VW “Beetle” and an NSU TT. “My first outing as a works driver was in 1968 when I competed in the Marathon de la Route over 84 hours on the Nürburgring.” Porsche celebrated a double victory with the 911 S there.

Simona de Silvestro’s father, owner of a car workshop in Nyon, watched many Formula 1 races on TV at the time together with his still young daughter. “I was a motorsports fan already as a child,” she confirms. She demonstrated her driving talent in a go-kart at just six years old. After success in karting and Formula Renault, she moved to the US. There she achieved 4th place overall in the Formula BMW. This was followed by three successful years in the Atlantic Championship, before she switched to the IndyCar Series. There she drove to a podium finish in Houston in 2013 as one of only three women. Driving a Nissan V8, she recently competed in the Australian Supercars series for three seasons.

She sums up her racing experiences as follows: “The European teams work very painstakingly, the Americans are much more relaxed, and the Australians are perhaps sometimes too relaxed.” And now the works contract with Porsche. “Of course, a dream has now come true for me. No other sports car manufacturer has such a fantastic motorsports tradition.” In addition to her role as test driver she will also compete as part of the team of ex-works driver Timo Bernhard in a 911 GT3 R in the hotly contested ADAC-Masters race series in 2020. Her excitement about this prospect is very evident. “That really is very cool”. A good thing is that a lot of testing takes place. Many European race tracks are still unfamiliar to her due to her long career overseas. “I have never been to Oschersleben, for example.”

When asked about the subject of women in motorsports, Simona de Silvestro shrugs her shoulders and says: “At the start, some people look a bit more closely so see in which position the girl finished. I admit that I also do that for the other women. But things calm down after a while.” However, a woman must repeatedly prove her capabilities. “When a successful male racing driver changes from one series to another, everyone says that he is good. In the case of a woman, they say that it remains to be seen whether she will be successful.” In principle, all women should have the opportunity to show what they are capable of. “And that also applies to driving a racing car.”

During the active career of Günter Steckkönig, there were some drivers who believed that the race track was no place for a woman. “Even then that was absolute rubbish,” emphasises the veteran. He remembers a Formula V race on the Nürburgring Nordschleife where he was very happy that he was able to follow a yellow race car in terrible conditions. “If that car had left the track, I would have done so too.” Hannelore Werner, Germany’s most successful female racing driver at the time, was behind the wheel. 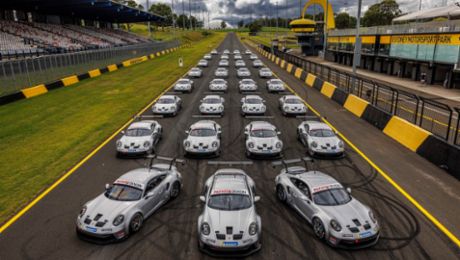 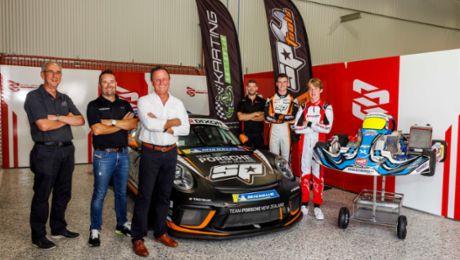