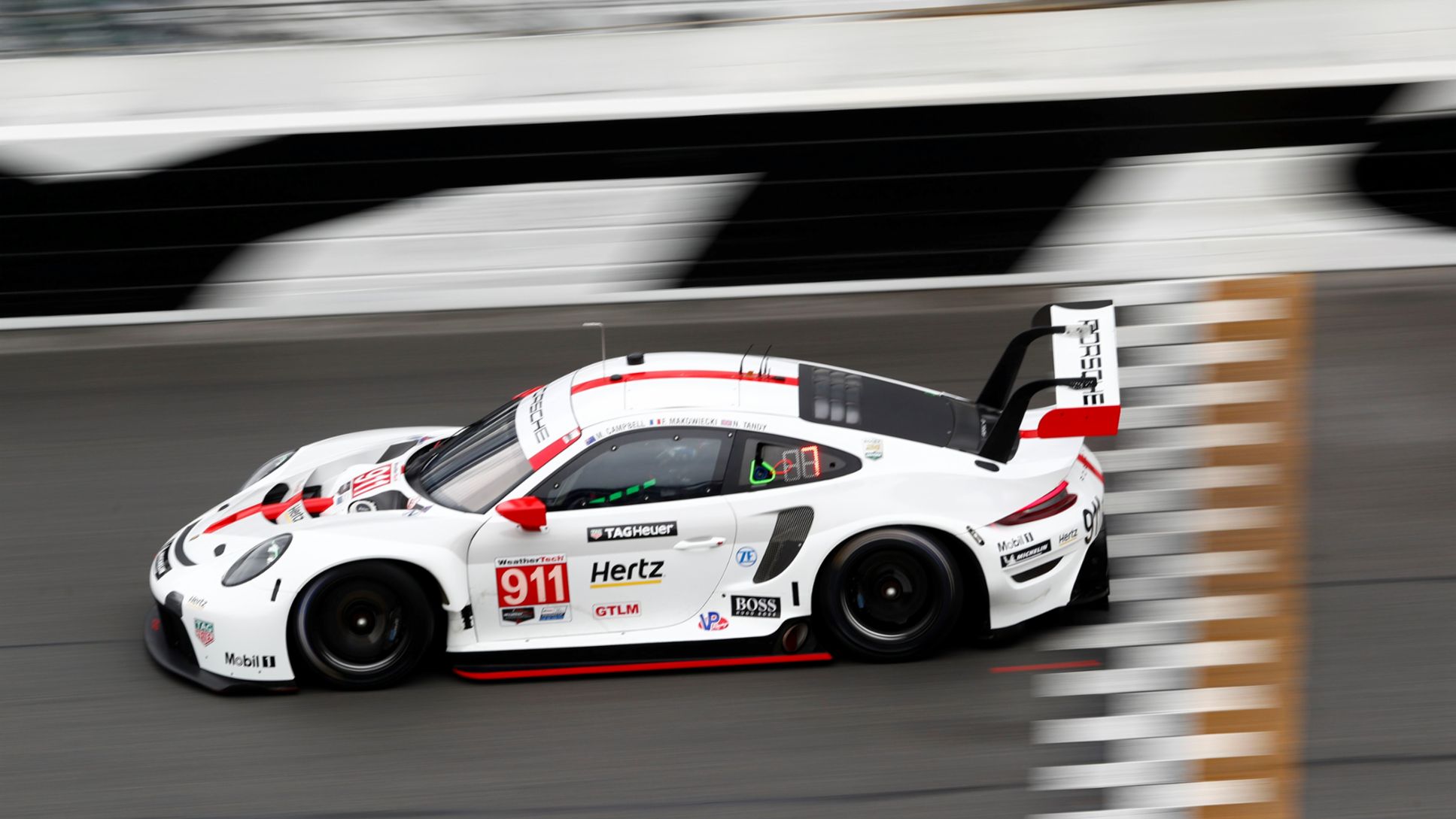 The best boxer in the motorsport ring

When a Porsche model receives the designation RSR, there is no doubt: this car is made for racing, maximum performance on the racetracks, and the best synthesis of performance, efficiency and driveability.

For the last 47 years, the nine-eleven, developed specifically for motor racing bearing the RSR badge on the rear, has competed for victories and titles at the world’s greatest competitions – with huge success. The first racer of this series, the 911 Carrera RSR 2.8, celebrated an impeccable debut in 1973. The Americans Hurley Haywood and Peter Gregg clinched overall victory at the 24 Hours of Daytona. That same year, the version powered by a three-litre boxer engine scored a convincing class win at the 24 Hours of Le Mans.

The progenitor of all RSR models from Porsche is the 911 Carrera RSR 2.8, which was created for the 1973 season based on the Carrera RS 2.7 as a prototype to comply with the FIA Group 4 regulations. Compared to the already lightweight production model, the new features were modest. The rear wheels grew 50 millimetres in width, the capacity of the flat-six engine was enlarged through bigger bores, and the so-called “ducktail” on the engine lid gradually developed into a real rear wing. During its first racing season, Porsche launched a new version powered by a three-litre flat engine. This was followed by a 2.1-litre turbo. In 1974, the turbocharged RSR was the first turbo vehicle to write history at Le Mans. However, the large-capacity normally aspirated unit is still the preferred aggregate in GT racing today. The new Porsche 911 RSR (2019 model) is powered by a 4.2-litre six-cylinder unit – the largest boxer engine ever fitted in a racing 911 ex-works. In addition to sheer performance, efficiency, reliability and driveability have always been the development focus.

“I often drive historic 911 racing cars from Porsche. What fascinates me every time is that they all convey that typical 911 feeling – regardless of their vintage. The basic characteristics have been retained,” explains works driver Patrick Long (USA). The American is passionate about the Porsche marque. In his home of Los Angeles, Long regularly organises meetings for classic Porsches under the motto “Luftgekühlt”. “The first RSR from 1973 is a stunner,” says the Californian. “The air-cooled engine is incredibly responsive, flames often shoot from the exhaust, the feedback from the chassis is precise, and the braking performance is simply astounding. Of course, everything is significantly better with the latest version of the Porsche 911 RSR, but it becomes apparent to every driver at the wheel of a classic model that the RSR has always been an outstanding car. The 1973 vehicle was made to be driven fast.”

The RSR prototypes with 2.8-litre engines from 1973 produced 290 hp (213 kW), the three-litre from the following year put out 330 hp (243 kW). The production aggregate of the Carrera RS series received only minor modifications. The bore was 92 millimetres; the stroke of 70.4 millimetres remained unchanged compared to the road-legal vehicle. At 10.3:1, the compression was rather moderate by today’s standards. The six-cylinder normally-aspirated engine in the rear generated 294 Nm of torque. In the racing version, the oil cooler was installed at the front of the vehicle.

“I often drive historic 911 racing cars from Porsche. What fascinates me every time is that they all convey that typical 911 feeling – regardless of their vintage. The basic characteristics have been retained.” Patrick Long

In the new Porsche 911 RSR, which is based on the high-performance 911 GT3 RS road-legal sports car, the engine was mounted in front of the rear axle for the sake of weight distribution. In race trim, the latest 4.2-litre boxer in the RSR generates around 515 hp (378 kW), tamed by the regulatory requirements (Balance of Performance) when campaigned in the FIA WEC and the North American IMSA series. The torque has more than doubled compared to the Porsche 911 Carrera RSR 2.8 – with a significant improvement to the efficiency. The “Ur-RSR” featured a type 915 standard manual gearbox with five gears. Today, the power is activated by a drive-by-wire system and transmitted to the drive shafts via a sequential six-speed constant-mesh box. Gears can be shifted via a rocker switch with a power interruption of just milliseconds. “I think that is the biggest difference between then and now is precisely in this area,” explains works driver Romain Dumas (France). “In the past, when shifting down, you had to put your left foot on the clutch and your right foot on the brake and accelerator at the same time. Nothing worked without double-declutching. It was like a tap dance. What’s more, the right hand had to be on the gear lever. It was a very challenging. These days, it’s easier as a driver thanks to technical developments in almost all areas – you can drive at the limit much more consistently with the new Porsche 911 RSR.”

Chassis development: Everything used to be lighter

In developing the 911 Carrera RSR 2.8 for the 1973 season, the Porsche engineers scored a real coup. Despite the integration of many safety features, including a steel roll cage and the installation of a large 120-litre fuel tank, the racing prototype still only tipped the scales at around 900 kilograms. This meant that the racer was a lightweight like the production model Carrera RS. The engineers achieved this goal because they were already using cutting-edge materials in the 1970s. Doors, front lids and side windows were made of plastic. The first RSR was not only light, but it was also slim and short. The latest generation is around 50 centimetres wider, 40 centimetres longer and with a 30-centimetre-longer wheelbase. Asterix became Obelix – but without forfeiting its nimbleness and punch. On the contrary: the extensive setting options on the kinematics of the Porsche 911 RSR-19 ensure the best possible adjustments for all racetrack characteristics and conditions. Moreover, the optimised weight distribution with the engine mounted in front of the rear axle yields noticeable advantages. “There’s always a lot of movement in the Porsche 911 Carrera RSR 2.8 from 1973. We no longer get those enormous rolling motions in the new cars, nor do we get hefty understeer. But such things are great fun,” says Richard Lietz. The experienced works driver from Austria adds: “When braking and turning in, you have to wait for the perfect moment during the load change to put your foot down again. If you don’t get it right, it gets tricky; a huge challenge for us drivers. The first RSR is my all-time favourite. It’s wonderful to drive this car at the limit. Such a car asks to be driven fast. With all RSR models, this is an approach appropriate to the species, so to speak.”

The technical advances of Porsche’s RSR models are clearly evident on the stopwatch. In 1973, Gijs van Lennep (Netherlands) and Herbert Müller (Switzerland) drove to a class win and fourth place overall at the 24 Hours of Le Mans clocking an average lap time of 4:20 minutes. The qualifying times were around five seconds faster. The then 13.640-kilometre Circuit des 24 Heures still had no chicanes on the legendary Mulsanne straight. Nowadays, on their long run from the Tertre-Rouge corner to the Mulsanne right-hander, vehicles are reined in twice by chicanes. A Le Mans lap today is only 14 metres shorter than in 1973, but the lap times are very different. In 2018, factory driver Gianmaria Bruni (Italy) set a new qualifying record for GTE vehicles in 3:47.504 minutes. With favourable weather and track conditions, the Porsche 911 RSR of the 2019 model year will very likely be just as fast at its planned Le Mans debut in September 2020.