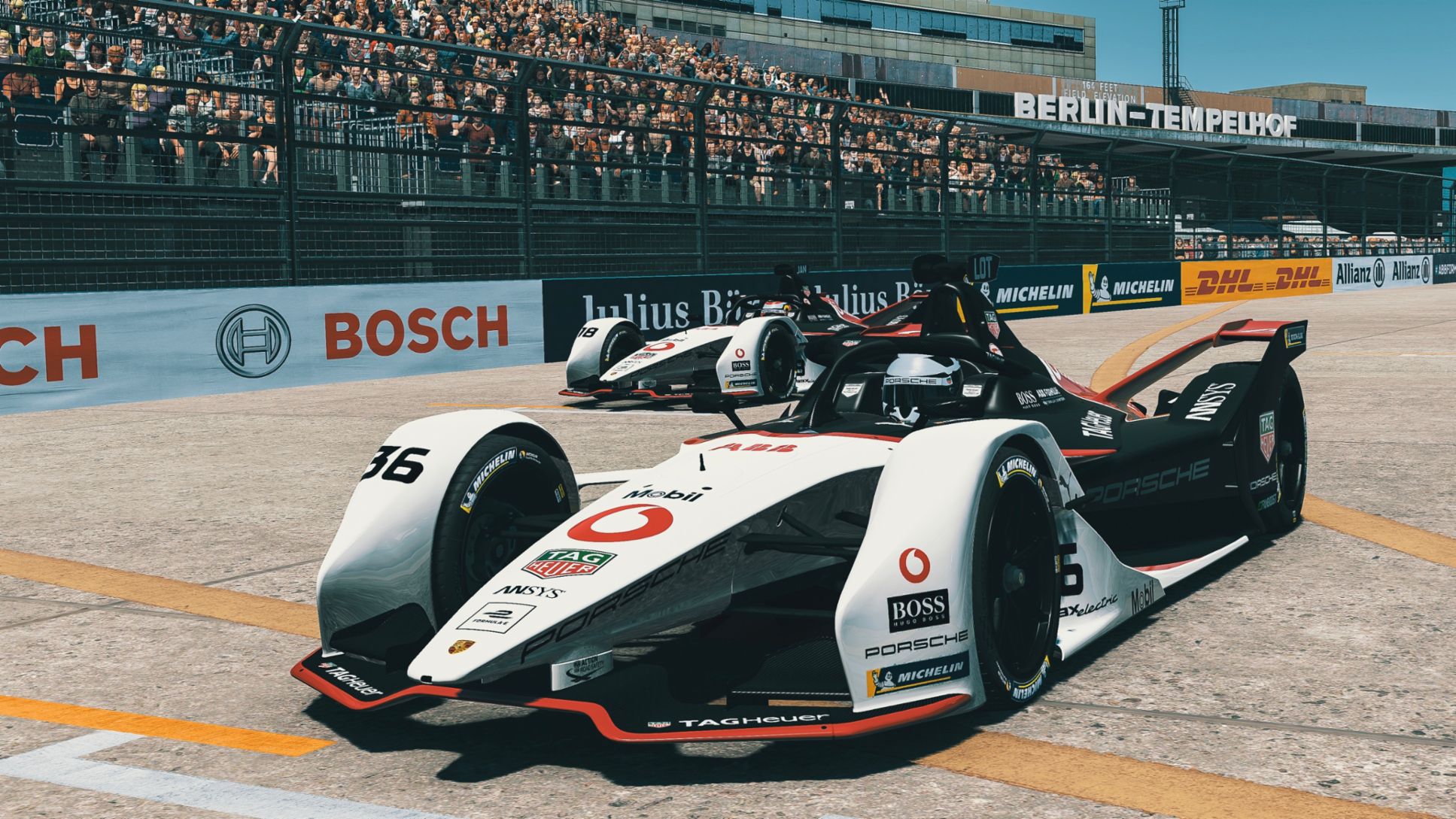 Points at the Grand Final: fourth consecutive podium for Rogers

The ABB Formula E “Race at Home Challenge” has drawn to a close with a thrilling final on the virtual circuit in Berlin (DE). Australian Sim racer Joshua Rogers claimed third  and fifth place in the last two “Challenge Grid” races, marking the fourth podium of his season.

André Lotterer (DE), from the TAG Heuer Porsche Formula E Team, finished tenth adding more points to his total in the final race. Collisions just after the start created chaotic conditions and prevented. Lotterer’s team-mate Neel Jani (CH) from recording a good result and had to settle for 23rd place.

Neel Jani started the race from seventh place, but the chaotic scenes just after the start pushed him all the way to the back of the field. André Lotterer was able to move up two positions from twelfth on the grid and maintained a good pace as the race progressed. Four laps from the end, the German driver was overtaken by two other cars, however he reclaimed tenth place after retrospective penalties were imposed on two other drivers. The result saw Lotterer score two points, as double points were on offer for the top ten positions in the final race.

It was the fifth appearance for Joshua Rogers in the field of sim racers and influencers – and the Australian driver once again gave a consistent race performance after a strong third in the first race. Rogers started from fifth place for race 2 and crossed the finish line in the same position. The reigning Porsche TAG Heuer Esports Supercup champion moved up one place on the first lap but subsequently lost it again on lap eight. The second sim racer for Porsche in the “Challenge Grid”, Marius Golombeck (DE), also put on a strong display in the final race by finishing tenth.

Marco Ujhasi (Manager Esports at Porsche Motorsport): “That was a fantastic finale to the ‘Race at Home Challenge’ in Berlin. Congratulations to Stoffel Vandoorne on his victory in the drivers’ championship. Over the last eight weeks we have enjoyed some thrilling sim racing that has allowed us to provide virtual proof of just how fascinating Formula E is, even during the Coronavirus pandemic. It was particularly nice to be able to collect donations for UNICEF as well – a great campaign for a good cause. The season in the virtual motorsport world will continue for us now. I hope that Formula E and the TAG Heuer Porsche Formula E Team will soon be back in competition, thrilling fans on the real racetrack.”

Neel Jani (Porsche 99X Electric, #18): “Those were some intensive weeks in the ‘Race at Home Challenge’. I had never spent so much time on the simulator at home before. It was definitely worth it, as we supported UNICEF and helped children all around the world. From a sporting point of view, it took me a while to get used to the virtual Formula E, but I got more into the swing of it with each race – on the circuit itself as well as with regard to the technical requirements, streaming and many other things. Now I am looking forward to hopefully being able to return to real motorsport in the near future.”

André Lotterer (Porsche 99X Electric, #36): “This race marked the end of the ‘Race at Home Challenge’. All in all, it was an excellent idea to get this series going to benefit UNICEF. It was also great fun to compete against the Formula E guys over the last few weeks. We trained a lot to improve from race to race. That was anything but easy. Now I hope that we can step on the gas on a real circuit sometime soon.”

Joshua Rogers (Porsche 99X Electric, #18): “I did not have an easy final race. I moved up one place after the start but after that it was difficult to make any more progress. I am pleased with fifth place, especially seeing as my participation in other Esports events prevented me from taking part in all the races. Congratulations to Kevin Siggy. He did a great job and has more than earned his Formula E test drive. Working with the TAG Heuer Porsche Formula E Team during the ‘Race at Home Challenge’ was a great experience for me. I would like to thank Porsche for this fantastic opportunity.”

Since the end of April, virtual races of the ABB Formula E “Race at Home Challenge” were held every Saturday as a replacement for the standard races in the ABB FIA Formula E Championship 2019/2020, which have been postponed due to the current crisis. The series saw all drivers in the regular championship do battle for virtual points in racing simulators. The races were held on the realistic rFactor2 simulation platform. Sim racers and influencers also went head to head in separate races to the Formula E drivers. With the “Race at Home Challenge”, the ABB FIA Formula E Championship has supported the child welfare organisation UNICEF, which will be receiving donations raised during the race events.