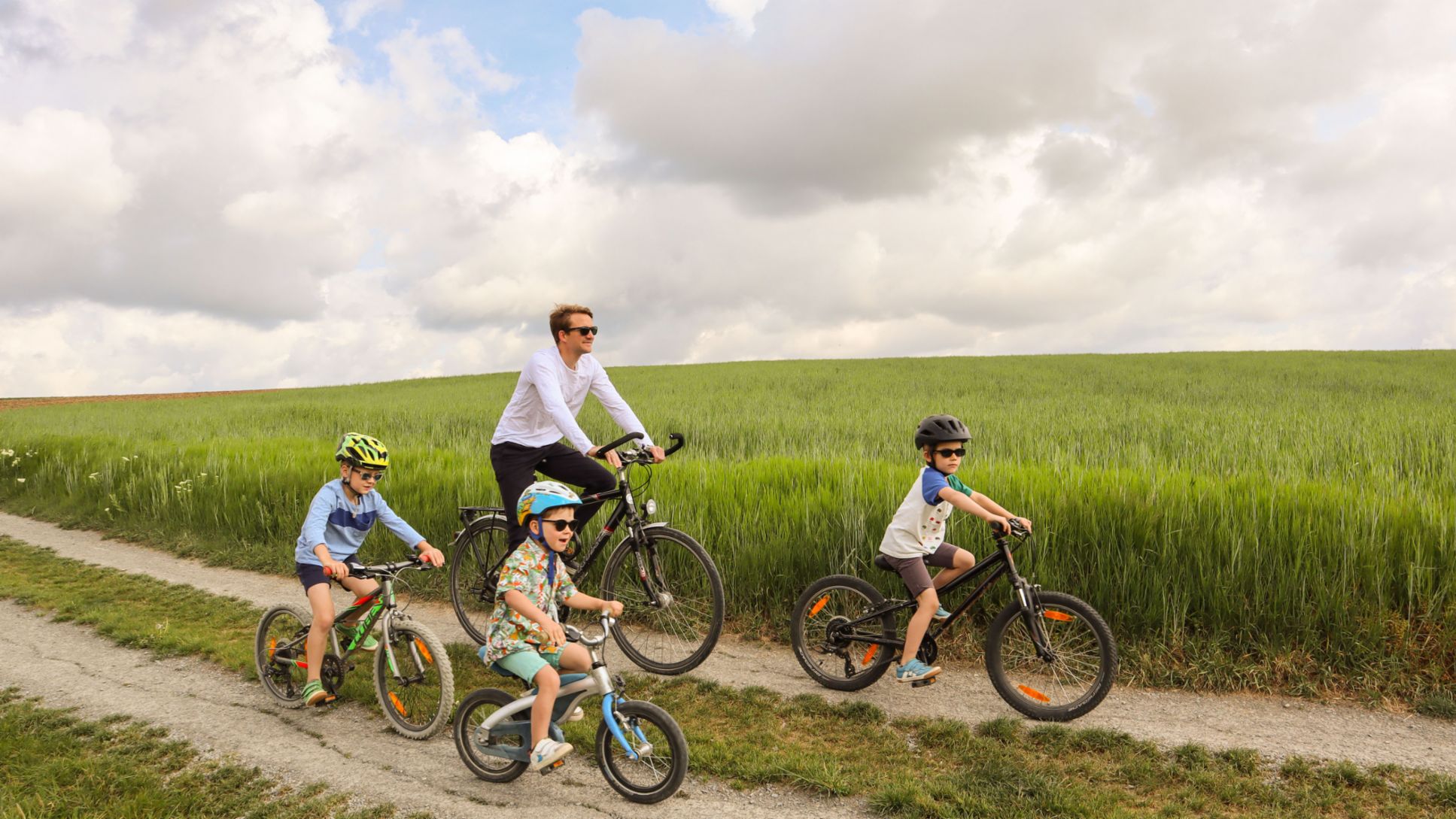 The life of Porsche works driver Dirk Werner has been a construction site since 2016. The 38-year-old is using the downtime in motor racing during the Coronavirus pandemic to work on his house on the northern outskirts of Würzburg. The three tons of rocks from a nearby quarry are earmarked for a stunning new terrace. The 1.8-metre-tall blonde man heaves the heavy slabs of sandstone into place with apparent ease. That’s just how he is.

“I always do my own manual work. Sawing, drilling, milling, I do everything myself. There is still a long list of jobs since we laid the foundations of our home four years ago. And especially now during the Coronavirus, I have a lot of time for such projects,” explains the family man.

With his wife Heidemarie and their three sons Henri (8), Theo (7) and Fritz (4), the experienced German racing driver has created a dreamlike retreat in the hills of Franconia. The city centre of Würzburg is not far away, and many leisure activities are close by. The surrounding fields, meadows and forests are perfect for long runs or walks, and offer plenty of open spaces for the kids to play. It is the perfect home for the grounded full-throttle hero – an expression of his remarkable balance.

Dirk Werner rests easily within himself, no matter what. In the paddocks of the motor racing world, the native of Lower Saxony enjoys a reputation as one of the nicest drivers around.

“I’m pleased that people find me nice. I think being polite is only natural,” Werner.

“It’s not something I do consciously, it’s just how I am. Why shouldn’t I be nice? I’m living my dream as a Porsche works driver, I have the perfect family and my life is fantastic,” states the former DTM driver.

It quickly becomes clear: Dirk Werner cherishes his personal and professional happiness – which is not surprising, because he has worked hard to achieve his dream.

Growing up, motorsport held very little interest for the Porsche works driver. In the family home, racing was never a topic; it was not a passion handed down from his father, uncle or grandfather.

By chance, Dirk Werner started karting at the age of ten. He immediately discovered his passion – and so did his father. Instead of following in his father’s footsteps to become a dentist, the young racer focused on a career in motor racing, despite showing great promise at football. On his way to sitting his university entrance exams, he contested kart races and achieved numerous successes in single-seater racing.

“Dentistry was not an option for me. I was adamant I wanted to make a living out of racing. As a backup, I did an apprenticeship as an industrial mechanic and a degree in mechanical engineering at the same time,” recalls Werner.

During his training at the Wolfenbüttel University of Applied Sciences, the balancing act between studying and racing became increasingly more difficult.

“The final two years before graduation were tough. I raced a lot in the USA at that time and I wasn’t able to sit some of the exams. So my studies took a little longer than usual. Still, I finished them. Interestingly, those intensive years of study were among my most successful in motorsport,” explains the mechanical engineer, whose diploma thesis focused on the simulation of automobile suspensions.

The acquired knowledge helps the Grand-Am Champion from 2007 and 2009 enormously. When it comes to setting up a car, the resident of Franconia knows exactly what he is talking about.

“It’s essential for every driver these days. If you don’t have a technical understanding you’re going to find it very hard in motorsport,” he says.

Racing is his passion, profession and joy – but it is definitely not everything in Dirk Werner’s life.

“My family always comes first,” he says. His long-standing relationship with Heidemarie forms the basis.

“We’ve been together for 18 years, we have three children together and our marriage is harmonious. I’ve known my wife for a very long time, her brother and I used to play in the same soccer team together. There’s even an old photo of Heidemarie and I when we were four and seven. It was taken during a church event back then. A big coincidence, of course, but simply fantastic from today’s perspective,” admits Dirk Werner.

Another coincidence: Heidemarie’s parents were the pastors who conducted Dirk Werner’s confirmation in a small town in the state of Hesse. Werner’s eventual in-laws, however, left the actual marriage ceremony to a colleague.

“If you don’t have a technical understanding you’re going to find it very hard in motorsport.” Dirk Werner

In addition to family, career and further projects around the home, before the pandemic crisis, the avid footballer also found time to kick a ball around.

“I normally train with the veteran soccer team in my small district. We have a great time once a week. I don’t feel like an old guy at all,” he jokes.

Werner hates to miss the fun and games of the group of ten to 20 footballers.

“And I make time to visit top-league games more often. In the past years I’ve gone with friends to some Hamburger SV home games and once to Eintracht Frankfurt and Borussia Dortmund. I even had tickets to a European championship game in Munich, but unfortunately that’s been postponed. I’ll have to watch the games on television when it starts up again. I love watching great sport. At the moment I’m enjoying seeing young stars like Kylian Mbappé. I’m not a fan of just one team, I like soccer in general.”

The lean blonde from Würzburg always looks at the big picture. Whenever possible, the 38-year-old combines his extensive travels as a Porsche works driver with discovering the countries, cultures and people.

“I used to stay in the USA between two races and go exploring. This isn’t as easy now as a father of three, but last year was an exception. My dad travelled to the IGTC race in Kyalami with me. After the race we went on safari together in South Africa. My family and I had given him the trip for his 70th birthday. He’s a passionate hunter and the safari was perfect, of course. I promise no shot was fired, but the trip was a real hit.”