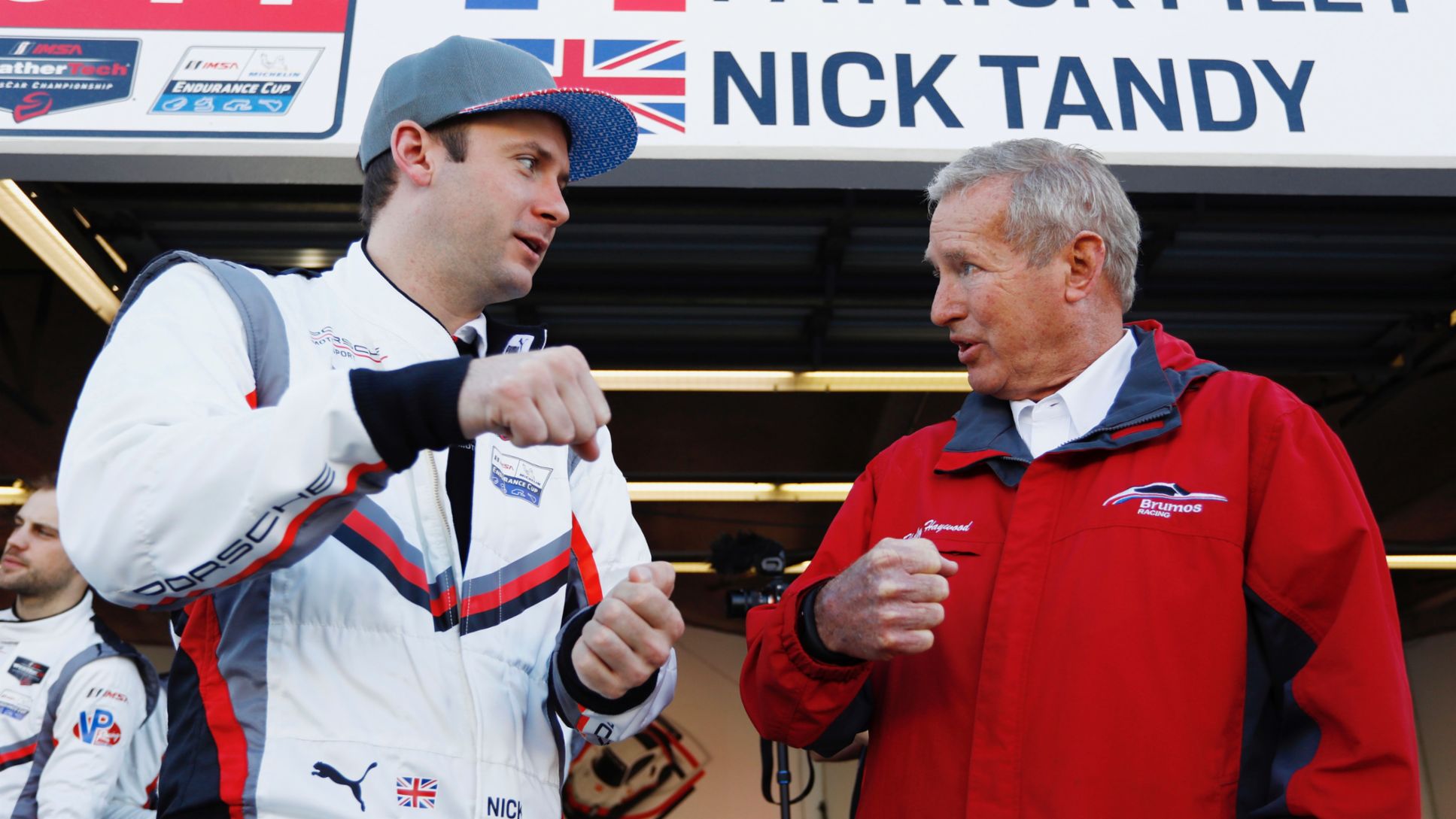 This weekend, in the warmth of the Florida spring, factory Porsche 911 RSR racing cars should have been in action at the legendary Sebring race track. However, with the WEC 1000 km race cancelled and the IMSA 12 hours postponed until November, no flat sixes will howl round the old bomber crew training base. No brakes will glow in the dusk, no new history will be written …

Instead, on either side of the Atlantic, two racing legends – one past, one present – are on a video call, comparing their experiences of Sebring over the last fifty years. From seeing burning couches to leading a 200-mph, five-car convoy of 935s so far off the track they couldn’t find their way back on, there isn’t much Hurley Haywood and Nick Tandy haven’t seen at Sebring, where Porsche has claimed victory no fewer than 18 times.

Seventy-one-year-old Haywood first won Sebring in 1973, doing it in a Porsche 911 RSR, just a month after he’d won the 24 Hours of Daytona. The American also won Sebring in 1981 as well as Le Mans three times, Daytona a total of five times and the IMSA GT Championship twice.

Tandy, meanwhile, is one of the current crop of elite works Porsche drivers, competing in the latest 911 RSR racer. No-one has beaten the 35-year-old Brit at Sebring since 2017, and he will be going for a hattrick of  GTLM wins in November, to add to the 2018 and 2019 trophies. He has won Le Mans outright, in the Porsche 919 Hybrid. He was also third in class on the Sarthe last year, racing a works 911 RSR painted in red, white and blue as an affectionate tribute to the Brumos Porsche racing cars of old – the most famous driver of which was the man currently on the screen in front of him.

Hurley Haywood: “I keep visualising it. I’d be down at Sebring now and here I am sitting in St Augustine. Weird deal … I mean, I started racing at Sebring in 1971 and have been pretty much every year since.”

Nick Tandy: “My first time there was in 2013. It doesn’t seem that long ago but this’ll be my eighth already. It’s just one of those events. I feel so sorry for the fans, for the guys who were looking forward to their Sebring week. Sebring is more of an event than a race. Has it always been like that?”

“There sure is a certain flavour to Sebring.” Hurley Haywood

Haywood: “[Laughs] Oh yeah. There sure is a certain flavour to Sebring. It has so many unique qualities about it, it would be almost impossible to replicate it anywhere else. You’re down there in the middle of the orange belt so you have the smells of racing mixing with that of the blossom. It’s intoxicating. Back in the seventies, we used to stay at this really old hotel that used to have lots of elderly folk coming down to spend the winter in Florida, mixing with all the racing teams. You’d have these quite formal dinners, with the waiters in their white jackets and all, and then they’d open the dancefloor and you’d have this amazing array of people having a good time.

“The fans, though, are what makes Sebring special. You know a race track is a race track but the fans there are something else – you see all of humanity having a good time. I didn’t get out among them much when I was racing as I had a job to do, but as soon as I retired, I went out into the crowd and it was the most amazing experience.”

Tandy: “I must admit that I did ‘borrow’ a scooter my first year and sneak out during night practice. I reckon the Turn 7 to Turn 13 area is the place to be. There are couches burning and everyone’s on the top of their RVs having a beer. You hear these stories but you’ve got to get out there and experience it.”

Haywood: “The track’s pretty special too. Every time I went I thought that I’d never work out how to make the car controllable. You’re bouncing over the bumps, your teeth are chattering and the engineers tell you you’ve just got to deal with it. But, by the end of the weekend it comes together. Whether it’s a GT car or a prototype, it all just works.”

Tandy: “You do wonder what the hell you’re doing there. Even if you go back a year later, the first few times you get out in the car, you’re wondering how the hell this race has taken place the year before, let alone for 50 years but, after a day or two, you get used to it. I really look forward to it as an event.”

Haywood: “I’ve driven several track configurations and back in the seventies, after the hairpin, it used to be completely pitch black at night. You were just able to see what your headlights were picking up. You had two really, really fast straights and you had a pole that stuck 50 feet up into the air, which you looked for to help with your turn in point. I remember one year I was leading a group of four or five 935s and we were all running together and I had the lead at that point. Because the lights were so bright, I was a little blinded and I missed the turn in point by the pole and suddenly I was in the middle of this knee-high grass, doing over 200 mph. And the guys behind me had, I guess, been thinking “Hurley knows where he’s going” – so they all followed me off – also doing 200 mph plus! Suddenly cars were spinning, lights were flashing past but miraculously nobody hit anyone. When we finally came to a stop, pointing in all sorts of directions, none of us knew where to go to get back to the race track. We just got lost out there and it felt like it took forever to get back onto the circuit.”

Tandy (laughing): “You do tend to follow the car in front – you just follow their brake lights, don’t you? The last corner is the darkest one at night now, but it’s also not so good if you’re in the car for the four or five laps while the sun is setting.”

Haywood: “You’re right – it’s always been just a nightmare as the sun goes down because you’re completely blind. You’ve got to pick out little reference points, not in front of you but out of the side window, to tell you where to brake, turn in or hit the apex. And it’s the worst corner for bumps, with a really high speed turn in as well. The cars are literally airborne.”

“I really look forward to it as an event.” Nick Tandy

Tandy: “You’ve actually got to watch out for the wear of the underfloor with the cars running so low to the ground that they smash into the tarmac through there. But the engineers set the car up for the rest of the track and the drivers just have to deal with the bumps. We’re bitterly disappointed not to be there this spring. We were going to Sebring as two-time defending champions. We’re going for the hattrick! It’s a global event, like Le Mans or Daytona and you know what it means to Porsche as a company – the amount of time and effort goes into building these cars and taking them to the race track – and it’s your responsibility to drive and hopefully bring your car back in one piece. It is a lot of pressure, and it falls on our shoulders to carry on the traditions of winning. Traditions established by guys like you.”

Haywood: “We’ve been really spoiled by working for a company that is so committed to winning. When I was racing, I had the privilege of working with the likes of Norbert Singer and Peter Falk. It was an enormous luxury to have them behind you, helping you understand what the car was doing. They had a totally unique way of getting the information out of you. Sometimes the drivers, especially back in the 70s or 80s, weren’t as articulate as the you guys are nowadays but it was my rule just to tell them what the car was doing and to leave it up to them to decide what to do about it. They’re the smart ones …”

Tandy: “Everyone is an expert in their own field. That’s when a team is good. What was your favourite car at Sebring?”

Haywood: “The 962 was just such a sweet car to drive – the first one I raced with true ground effect, just a driver’s dream. The power was good, the brakes were good, the handling was good and it was so reliable. After I broke my leg and couldn’t use the clutch, I drove a Jaguar with a straight-cut gearbox for a while and the 962 was just in a different league. But it’s tough to choose just one – it’s like being asked which your favourite child is! The 914/6 GT was great too. It was amazing fun to drive that giant-killer, chasing down Mustangs and Camaros and Corvettes in a car with half their horsepower, winning not just at Sebring but the whole championship.”

Tandy: “Hopefully we’ll have the race in November and it’ll be unique as it’ll be during the winter and the last race of the season.”

Haywood: “I look forward to seeing you guys coming over here.”

Tandy: “Yeah, Hurley. We’re looking forward to seeing you too …”