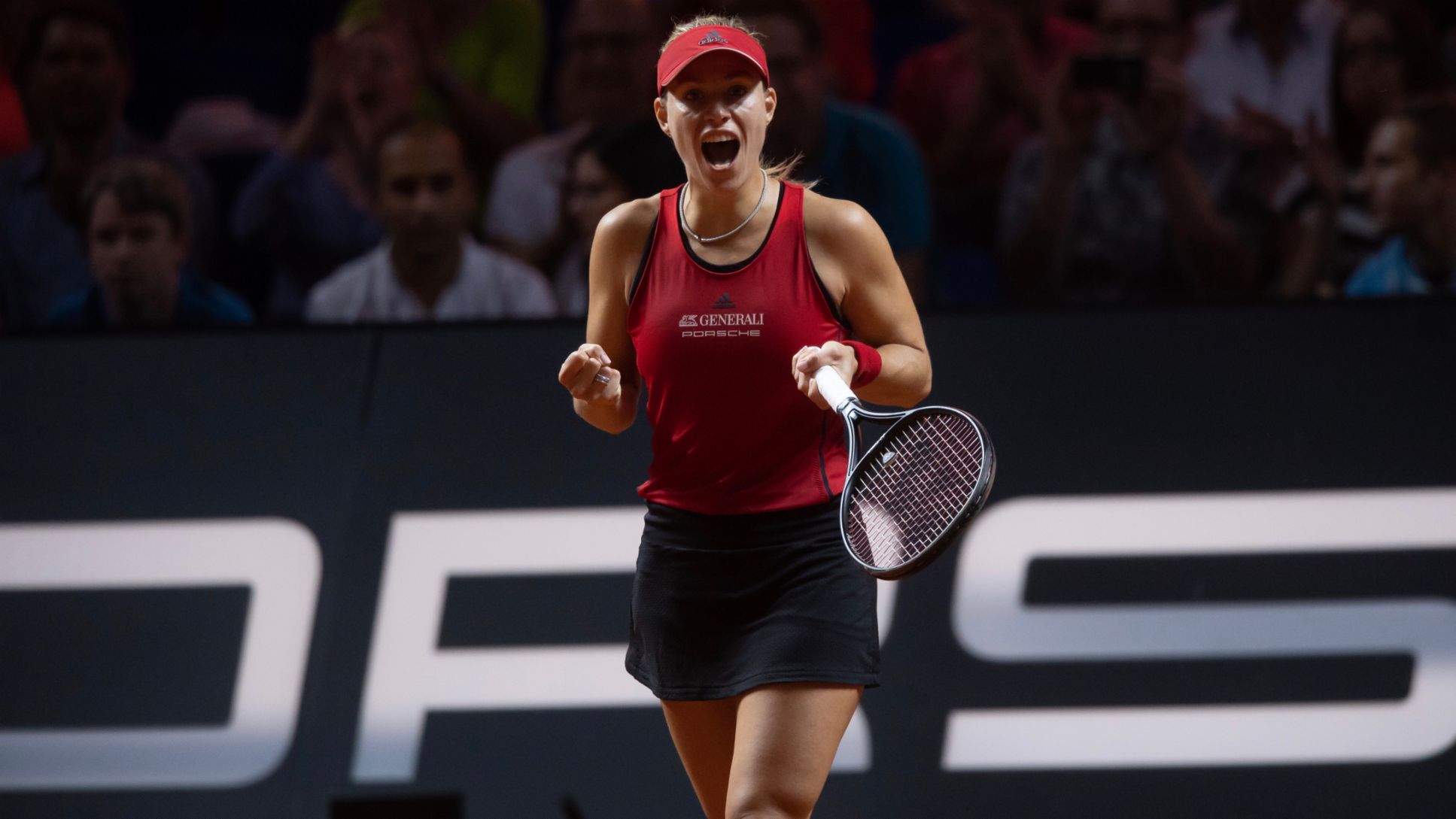 The Porsche Brand Ambassador Angelique Kerber is well known for bellowing, in German, “Komm‘ jetzt” to gee herself up. What’s behind it. Together with the German “tennis Magazin”, we will reveal the way in which the Wimbledon champion demonstrates mental strength.

“Komm’ jetzt!”, the German equivalent of “come on”, is a clear challenge for the person uttering the words – but in this moment in time it is nothing less than a synonym for, “Yes, I can”.

“Komm’ jetzt!” It does not sound totally euphoric – also not too hyped up and certainly not excessively frenetic or even in-your-face. “Komm’ jetzt!” If you listen carefully, a tiny bit of reservation is discernible.

“Komm’ jetzt!”. The handbrake is almost released but not quite 100 per cent, maybe 85, maximum 90 per cent. It ensures the emotions do not threaten to blow up the framework of control. Like a bobsleigh in the track that is thrown from side to side but remains on course thanks to the walls. Nothing is worse in tennis than to lose one’s concentration due to emotional releases that are too intensive, no matter whether positive or negative.

“Komm’ jetzt!” To also lend her verbal trademark an optical expression on the court, Angelique Kerber crouches slightly and bends her upper body forwards so that it is almost parallel to the ground for a moment and apparently hovering in the air. She also clenches her fist and the strength needed is clearly visible. It is one of the typical “Angie” gestures that her fans love, and her opponents fear.

“Komm’ jetzt!” It really is the Angie statement made during a match that needs no translation on the Centre Courts of the tennis universe. An excellent combination of past and future. Born by the hope that the here and now can be repeated forthwith as often as possible.

“’Komm‘ jetzt!’ is something I say when a really good shot comes off. Often in a decisive situation,” explains Kerber. “And at the same time, it naturally serves as motivation for the next rally.”

This two-word pairing is basically perpetually on the tip of the 2015 and 2016 Porsche Tennis Grand Prix winner’s tongue. The automatism kicks in when the winning of a special point has to be celebrated. When it is all about making one’s mark. For oneself. And posting a statement – directed at the opponent. “Yes, I can!” And that, dear fellow tennis player on the other side of the net, is something you have to know. Make no mistake.

Kerber by no means counts as one of the players with a tendency to be emotionally volatile when out on court. “In the past few years, I’ve actually become a little more open in this respect,” she stresses. Nevertheless, the 32-year old has always been considered to be somebody that deals with everything on her own. Covertly. Especially if things are not going too well in a match. At the same time, Kerber is quite aware that one can often read her face like an open book. How she is, what she is feeling. Despite the visor.

“There’s obviously been setbacks and many difficult phases in my career.” Angelique Kerber

She has accepted that it is a part of her. Like this basic much-admired ability to turn situations around. Both on a small and a large scale. In individual matches, in difficult phases during the season, in her whole career.

2016 – the late breakthrough when winning two grand slam titles as well as the ascent to the tennis throne, right to the top. 2017 – the bitter fall, lots of doubts, at the very bottom. 2018 – the Wimbledon triumph that makes a tennis pro immortal. The highly personal moon landing, right at the top.

Without her motto, “Never give up”, Kerber would have definitely never been able to write such an equally authentic and fascinating story. One that is long not over and one that she would obviously love to add a few chapters to. That a motto alone is not enough to move mountains is something the left-hander knows all too well.

A formula for success, like hers, is made up of a number of elements. On the one hand, there is the inner conviction that can start wavering in stormy times. Including aches and pains. “There’s obviously been setbacks and many difficult phases in my career,” says Kerber, “but ultimately I’ve always had this firm belief that I can make it to the top and achieve my goals.” Up until now, it even seemed as if she, when in a sporting crisis, drew an incredible amount of strength and courage particularly when in the deepest depths for new “Angie-like” highs.

Braiding her ponytail as a ritual

Leaving her heart on the court in every match is what Kerber, the eternal fighter, demands of herself. It requires a strength of mind, discipline and motivation – long before she even goes out onto Centre Court. For example, when preparing for the new season. “It’s important to leave one’s comfort zone every now and again and try out new things,” recommends the three-time grand slam winner who always has to have a goal in mind to be able to exceed her limits when practicing. “It spurs me on, I’m then extremely focussed.” And capable of going the extra mile and suffering that extra little bit.

A sense of competitiveness was already present within the Porsche Brand Ambassador at an early age. “Right away as a kid, I always wanted to play for a little treat against my parents on the tennis court. For an ice cream, a bar of chocolate or a cinema ticket.” And the best motivation these days? “When I see I can improve and develop.” Perfection driven.

In doing so, negative experiences can be beneficial. Perhaps not immediately at a first glance, but then at a second or a third. Kerber has learned that every defeat is an experience that can take you further down your personal road. Some of the most painful setbacks were the starting point for valuable learning processes for the former world number one: “Without them I wouldn’t have become the person I am now.”

Kerber is not one of the superstitious players on the pro circuit. Conversely, it does not mean that the German number one does not have any rituals. Before a match, she retreats to the locker room to, amongst other things, braid her ponytail and affix her visor. “In doing so,” she says, “I find a bit of peace and quiet and am in a world of my own.” Angie goes without loud rock music from her mobile – at least immediately before the match.

A knowledgeable crowd that is audibly and visibly rooting for her gives her a push. Like the one at the Porsche Tennis Grand Prix in Stuttgart. “In recent years, I’ve regularly been able to experience just how fantastically the spectators here get so totally into the match and cheer us all on. It releases extra energy, and not only within me,” says Kerber when talking about the extra portion of motivation from the stands in the Porsche Arena – something she is looking forward to again in 2021. And of course, a Porsche as the traditional winner’s car that she has won already twice is undoubtably extra motivation.

For as long as she plays tennis professionally, she, no matter what happens, will not abstain from using the unmistakeable pump up. “Komm’ jetzt!” – it is the clear sign of a Kerber in top form. Her form of “Yes, I can!”

Ashleigh Barty is the new Stuttgart tennis queen. By triumphing at the Porsche Tennis Grand Prix, the world No. 1 crowned her week on Sunday.