The cult of Luftgekühlt

“Luft came out of nowhere – I went to the first one in Venice Beach and it was just 12 cars around the corner from my house at Deus, in a little restaurant parking lot. I don’t know if it was the branding, the names attached to it or the fact it was curated, which made it sound very exclusive, but somehow they found this perfect niche.”

Dressed in a faded T-shirt and squinting in the L.A. sun, motoring writer and social media star Matt Farah is trying to put his finger on why Luftgekühlt has turned into a global phenomenon, but he’s struggling to concentrate. Around him, air-cooled enthusiasts are swarming to get a look at his Leh Keen designed 1987 911 ‘Safari’ as the sixth gathering gets under way in the impossibly cool setting of the Universal Studios backlot.

‘Luft’ has grown from nascence to one of the world’s most hotly anticipated car meets in just five years – and the latest ‘get together’ is on another scale. For the eighth time, Jeff Zwart, Patrick Long and Howie Idelson (the latter two being the original Luft co-creators) have teamed up to create one of the most highly curated events the automotive world has ever seen. And this time the sets of some of the most iconic Hollywood movies are theirs to play with. The vintage petrol station from Back to the Future, for example, has been converted into a period-correct Porsche service station, while the Western movie theatre in downtown New York has the event’s name and date emblazoned across its marquee.

The setting is only half of the magic, though. Award winning film director Zwart provides a hefty dose himself. From juxtaposing Paul Newman’s legendary 935 against a nondescript downtown metropolis, to placing a burnt orange 934 Turbo at the steps of a brown stone building, Pikes Peak legend Zwart is responsible for ensuring that the positioning of every car is judged to perfection.

“The ultimate compliment for me is that I set up a lot of these scenes and position the cars but don’t get to photograph them. Then tomorrow, I’ll look at an Instagram post and it’s exactly the shot I would have taken. That’s the way I get thanked,” says Zwart.

It’s easy to see why attendees are so keen to reach out and show their appreciation. Around each corner there is a feeling of falling headfirst into a Gran Turismo loading screen, with yet another never-before-seen-in-public car, such as Rod Emory’s bonkers 356 RSR: a custom built, twin-turbo, ‘outlaw’ 356 that is more befitting of a  “Mad Max” scene than the lawn of a traditional concours event.

Emory, a legendry So Cal-based Porsche tuner, is quick to admit that “some [people] are going to love it, some are going to hate it”. But as the crowds stand soaking up exquisite details such as the custom-made centre-lock wheels and the 935-inspired rear-end, onlooker after onlooker compliments him on the build. It’s a reaction that might come as a surprise to those used to traditional classic car events, but as Emory highlights, infusing your car “with some personal touches” has always been part of the Californian sports car scene.

As if to hammer the point home, around the next corner sits one of the most striking cars of the show ­– a Porsche 993 reimagined by Gunter Werks (internally known as the 400R). Peter Nam, founder and CEO of the So Cal-based tuning house, explains the intention behind the project: “The team wanted to see where the 993 would be now, if Porsche had continued to produce this car right up to 2019.”

The result is a fully carbon fibre body, a 430 hp air-cooled 4.0-litre engine and a completely reworked chassis. Even the headlights are milled from aluminium to save a few grams. As someone in the crowd points out “it’s as if a Monet was drawn on an iPad – it’s brilliant”.

Further along the route the scenery quickly transforms from bustling metropolis to sleepy Mexican town: the set from the A-Team, Knight Rider and Saving Mr Banks suddenly reimagined with dozens of pulse-quickening Porsche. It’s here, surrounded by a number of striking ‘Safari’ cars ­(lifted 911 inspired by the iconic 959 Safari) that it’s possible to see just how deep the air-cooled niche goes. Some owners — Jeff Gamroth, for instance — use their cars to compete in events such as the Baja 1000 off-road race, while others, like our friend Farah, claim they make the perfect “L.A car”.

If it’s possible to put aside the cars and full-scale dioramas, the achingly relaxed atmosphere takes centre stage. Owners of classics are found deep in conversation with owners of ‘outlaws’; Leica-wielding photographers step aside for smartphone-clutching teenagers, keen to curate their social feeds as spectacularly as the sights before them; and men, women, the old and the young, have almost exclusively stuck to the unofficial Luft dress code of a T-shirt, white trainers and a baseball cap. United in clothing, and in belief: namely that all air-cooled Porsche, regardless of provenance or condition, deserve respect.

“My favourite word is ‘happening’,” says Long, as he proudly surveys the crowds before him. “We all go from car event to car event, whether we’re in journalism or we’re racing drivers. But if it’s a happening … it’s more of a community. There’s a little bit of something for everybody.”

With rumours of more than 4,000 people turning out for the meet, there’s clearly a lot of something for everybody. 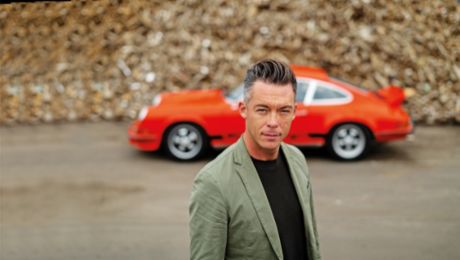 André Lotterer: "I never had a plan B"