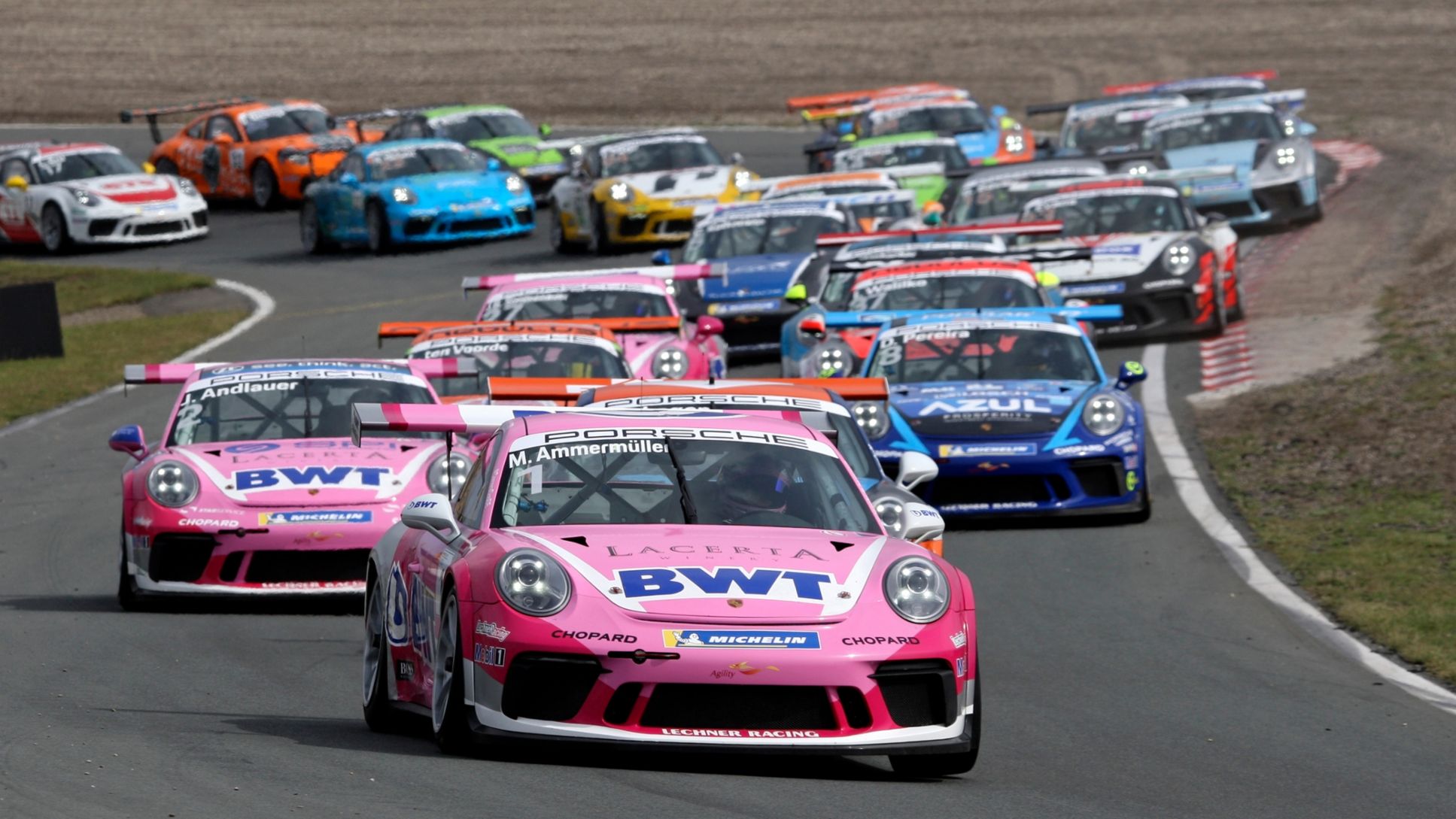 Another win: Perfect weekend for Ammermüller at Zandvoort

Porsche Carrera Cup Deutschland: Two pole positions and victory at both races – for Michael Ammermüller the race weekend could not have been more perfect.

After scoring first place at race one on Saturday, the German celebrated his fourth win of the season on Sunday at the Circuit Zandvoort in the Netherlands in his Porsche 911 GT3 Cup. The Dutchman Jaap van Lagen (Förch Racing) climbed the podium in second place at his home race, with Dylan Pereira (L/Lechner Racing Team) completing the podium. “The rain in the morning left some sections of the racetrack a little damp, and that made the first laps very challenging. For this reason, I drove a little more cautiously. Jaap van Lagen took a little more risk but I managed to successfully fend him off,” said Ammermüller.

In cloudy conditions and 20 degrees Celsius, the race at the North Sea coast of the Netherlands was interrupted twice. Ammermüller defended his lead at the start. His hottest pursuer, van Lagen, beat Porsche Junior Julien Andlauer (F/BWT Lechner Racing) in the sprint to the first corner. In lap three, the race had to be halted to salvage a vehicle, and was restarted behind the safety car. Ammermüller defended his front spot, however van Lagen stuck close to the Lechner driver and waited for his chance to overtake. In the tenth lap, the safety car was again deployed. After eleven laps, Ammermüller crossed the finish line as the leader behind the safety vehicle. “My start went really well. In my duel with Michael Ammermüller there was only one real opportunity for me to overtake. However, the risk was too high. Climbing the podium at my home race feels great,” said van Lagen, who comes from the Dutch town of Ede.

Larry ten Voorde (NL/Overdrive Racing by Huber) crossed the finish line in third place on the 4.307-kilometre dune circuit. However, the 22-year-old subsequently received a 30-second time penalty after a collision while overtaking Andlauer. As a result, Pereira inherited third place. Trailing the Luxembourger over the line were Igor Walilko (PL/Overdrive Racing by Huber), Jean-Baptiste Simmenauer (F/Lechner Racing Team) and Porsche-Junior Andlauer. “Parts of the track were damp so it was tricky at first to get the tyres to the right temperature. The interruptions made the problem worse. In the fight with Larry ten Voorde, my vehicle sustained some damage to the front, so unfortunately I fell back to sixth place,” said Andlauer.

Position seven went to Luca Rettenbacher (A/MSG/HRT Motorsport). Porsche Junior Jaxon Evans (NZ/Team Project 1 – JBR) reached the flag in eighth place on the Dutch dune circuit. “I managed to overtake two cars in the first lap, but unfortunately I couldn’t do anything more after that. The two safety car phases made it impossible to make up more ground,” said Evans. The winner of the amateur class was Stefan Rehkopf (Huber Racing). The German won his class ahead of Matthias Jeserich (D/CARTECH Motorsport by Nigrin) and Andreas Sczepansky (D/QA Racing by Kurt Ecke Motorsport).

Only eleven of the 17 laps

Since only eleven of the 17 laps were contested, the drivers receive only half the points. Thus, Porsche Junior Andlauer remains at the top of the standings with 143.5 points. Thanks to his victory, his teammate Ammermüller moves up into second place with 138 points. Ten Voorde ranks third in the championship just four points shy of Ammermüller.

At the qualification for the finale of the Porsche Esports Carrera Cup Deutschland, Louis Henkefend (Team Allied-Racing) was ahead. On the simulator in the Porsche Hospitality, the German turned the fastest virtual lap of the weekend at the Circuit Zandvoort in the time of 1:39.934 minutes. At Zandvoort and the Nürburgring (16-18 August), drivers in the Porsche Carrera Cup Deutschland can qualify for the Esports finale of the national one-make cup. At the final round of the virtual championship held at the ADAC SimRacing Expo at the Nürburgring on 30 August, the six fastest drivers will go up against six online players. Contenders from around the world have the chance to qualify via the sim-racing system Assetto Corsa.

Points’ standings after 10 of 16 races

Michael Ammermüller achieved a lights-to-flag victory in the Porsche Carrera Cup Deutschland on the North Sea coast of the Netherlands. At the wheel of his 485 hp Porsche 911 GT3 Cup, the German won round nine on Saturday on the Circuit Zandvoort. “Quite frankly, that was one of the most difficult victories from pole position. Sand had blown over the track and initially there was no decent grip. This meant I had to scale-back the pace a little in order not to make a mistake. I’m on pole position for Sunday’s race, too, and I’m keen to bring home my next win,” said Ammermüller. Second place went to Porsche Junior Julien Andlauer (F/BWT Lechner Racing), who now leads the overall classification. Rounding off the podium was Dylan Pereira (L/Lechner Racing Team).

Ammermüller defended his lead position after the start of the race in the dunes, however Jaap van Lagen stuck close to the bumper of the Lechner driver. In the second lap, the local hero from the Dutch town of Ede squeezed past Ammermüller at the end of the start-finish straight. Van Lagen, however, made a braking error and slid into the gravel. Ammermüller regained his lead spot, trailed by his teammate Andlauer and Larry ten Voorde (NL/Overdrive Racing by Huber). The two youngsters treated fans around the track to a gripping duel for second place. Ten Voorde overtook Andlauer in lap seven, however the Frenchman fought back and countered in the last of the 17 laps. Thus, Ammermüller and Andlauer made the double victory for their BWT Lechner Racing squad perfect. “The duel with Larry ten Voorde was absolutely fair. I saw my chance shortly before the flag and was rewarded,” said Andlauer.

Due to a jump-start, ten Voorde was handed a five-second penalty after the race which relegated him to fourth place. Pereira was thrilled with third position: “The result is super, but I’m not completely happy with my race. Unfortunately I couldn’t match the pace of the frontrunners. That has to improve on Sunday,” said the Luxembourger. As the best driver of the Talent Pool, a support programme of the German Carrera Cup, Leon Köhler (D/MSG/HRT Motorsport) occupied fifth place.

Points’ standings after 9 of 16 races

The drivers also chase top times on the simulator this weekend in the Porsche Hospitality. In the lead-up to the finale of Porsche Esports Carrera Cup Deutschland, the qualifying phase is being run at Zandvoort and the Nürburgring (16-18 August). The six fastest drivers earn a ticket for the final race, which will be held on 30 August on the occasion of the ADAC SimRacing Expo at the Nürburgring. The highlight: the drivers from the Porsche Carrera Cup Deutschland will meet six SimRacers who are currently qualifying online. The platform for the debut of the championship is the established race simulation Assetto Corsa.

In just a week, the Porsche Carrera Cup Deutschland contests rounds eleven and twelve. The storied Nürburgring racetrack hosts the doubleheader as part of the ADAC GT Masters programme.