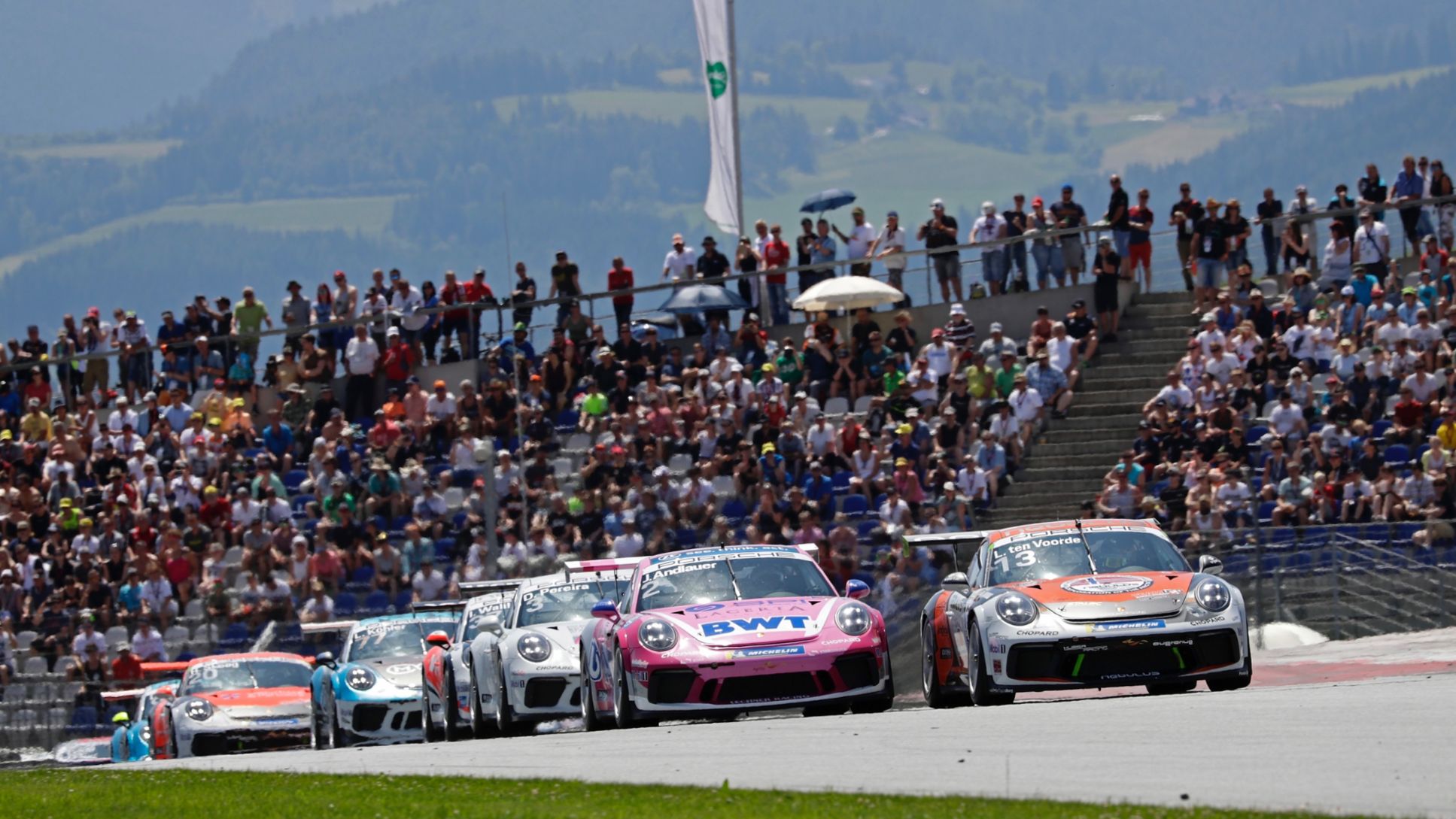 Round six of the Porsche Carrera Cup Deutschland will long be remembered by Julien Andlauer: At the Red Bull Ring in Austria on Sunday, the Porsche Junior scored his maiden victory in the national one-make cup series.

“I’ve waited for this moment since my first race. Coming from fourth to finish first was a challenge. One mistake and it would have been over, but my times were really quick,” said the delighted Andlauer. Trailing his Porsche 911 GT3 Cup over the finish line in second on Sunday was Michael Ammermüller (D/BWT Lechner Racing) and Dylan Pereira (L/Lechner Racing Team). Thus, three drivers in the Lechner Racing team (Faistenau) occupied all podium steps at the squad’s home race.

When the 29-strong field took off at the start, pole-sitter Ammermüller initially defended his lead against Larry ten Voorde (Overdrive Racing by Huber). The Dutchman had won the race in Styria on Saturday, but could not fight for the top spot at round six. In the second lap, Andlauer and Pereira slipped past the 22-year-old, with Porsche Junior Andlauer gradually inching closer to the seasoned specialist Ammermüller. The decisive overtaking move came in lap twelve, when he managed to accelerate faster out of the hairpin. The 19-year-old then proceeded to pull clear of Ammermüller to take the flag by a 1.3-second margin. “At first I managed to eke out a small advantage, but Julien Andlauer got faster and faster. Unfortunately I made a small braking error, which he immediately made good use of,” explained Ammermüller.

Pereira rounded off the Lechner trio on the podium. For the Luxembourger, this marked the third podium result of the season. “I almost managed to snatch the lead at the start, but unfortunately I was on the outside line. To finish amongst the top three at both races this weekend is a super result,” said Pereira. The championship leader, Larry ten Voorde, finished fourth on the 4.318-kilometre circuit ahead of Leon Köhler (MSG/HRT Motorsport). With this, the German is the best driver from the junior support programme of the one-make cup: the Porsche Carrera Cup Deutschland Talent Pool. Luca Rettenbacher (MSG/HRT Motorsport) secured sixth place as the most successful Austrian. Competing in front of home crowds this weekend alongside the driver from Eugendorf were Sebastian Daum (Dornbirn), Nicolas Schöll (Wien) and Philipp Sager (Peggau).

Following Rettenbacher over the line was Igor Walilko (PL/Overdrive Racing by Huber) and Henric Skoog (S/Overdrive Racing by Huber). For Porsche-Junior Jaxon Evans (Team Project 1 – JBR), however, the race ended early. After the second lap, the New Zealander had to steer his 911 into the pits. “My start was pretty good and I immediately gained two positions. Then another vehicle shunted me into a spin. This resulted in a puncture and I had to abandon the race,” declared Evans. Carlos Rivas (Black Falcon Team Textar) from Luxembourg won the amateur classification ahead of Stefan Rehkopf (D/Huber Racing) and Philipp Sager (Black Falcon Team Textar).

Ten Voorde continues to lead the championship after six races. The young driver from Boekelo has scored four wins and 123 points. Behind him sits Andlauer (77.5 points) and Pereira (63). The top spot in the rookie classification is occupied by Berkay Besler (TR/Car Collection Motorsport) with 84 points to this credit. With 115.5 points, Rivas is the best driver in the amateur class. Races six and seven of the Porsche Carrera Cup Deutschland will run as support to the DTM at the Norisring from 5 to 7 July. The storied racetrack in Nuremberg is the only city circuit on the calendar of the national one-make cup series. The Carrera Cup was last contested on the 2.301-kilometre circuit in 2017.

Points’ standings after 6 of 16 races:

Luca Rettenbacher (A/MSG/HRT Motorsport) clinched third place at his home race. “That was an incredibly intense race. Dylan Pereira put in a really strong drive and was right on my tail for a long time. But in the last laps I managed to pull clear,” said ten Voorde (Overdrive Racing by Huber). This marks the fourth win so far this season for the 22-year-old.

Spectators in Styria were treated to a gripping race, packed with many overtaking manoeuvres. At the start, ten Voorde defended his lead from Pereira the Austrian Red Bull Ring ahead of Dylan Pereira (L/Lechner Racing Team), however the race was interrupted in the first lap after several vehicles were involved in a collision. The restart took place behind the safety car. Again, ten Voorde defended his top spot, with Pereira keeping the pressure on the leader high. The Luxembourger made several attempts to overtake ten Voorde, however in the closing phase, the Huber driver pulled away from Pereira to cross the finish line after 17 laps with a 0.8-second advantage. “This is my first podium result of the year and that makes me very happy. In terms of my times, I could have possibly even won, perhaps I’ll manage this on Sunday,” declared Pereira.

Behind the leading pair, a three-way fight raged for third place: At first, Porsche Junior Julien Andlauer (BWT Lechner Racing) held P3. The Frenchman then slid from the track in lap five and lost his position to Luca Rettenbacher (A/MSG/HRT Motorsport). Meanwhile, Henric Skoog (S/Overdrive Racing by Huber) pulled past the 24-year-old. In a counter move, Rettenbacher ultimately brought home third place as the best Austrian driver of the day. “To achieve a podium finish here has been big dream of mine. Unfortunately I made a mistake shortly before the flag, which opened the door for Henric Skoog to overtake me. So I’m all the more thrilled that I succeeded in making the decisive move in the last lap,” Rettenbacher concluded.

#CarreraCupDE - Lights are out, race 5 of the season is underway at Red Bull Ring pic.twitter.com/qRIUNbJZqE

Fourth place went to Leon Köhler (MSG/HRT Motorsport) as the best driver in the Porsche Carrera Cup Deutschland Talent Pool. Trailing the German over the line were Skoog and Toni Wolf (D/Car Collection Motorsport). Andlauer took the flag in seventh place followed by Poland’s Igor Walilko (Overdrive Racing by Huber). “Actually, everything was going smoothly at first and I was on course for a podium spot. Then I slid into the gravel and lost several positions. I’m pretty disappointed to be honest, because a much better result would’ve been possible,” said Andlauer.

Porsche Junior Jaxon Evans (NZ/Team Project 1 – JBR) finished the race on twelfth place. “At the start I swapped paint with a couple of other vehicles. Unfortunately, my steering got slightly bent, which of course made my race more difficult. I’m quite disappointed with the result, but I’ll attack again on Sunday,” said Evans. Carlos Rivas (L/Black Falcon Team Textar) was the best amateur driver, with Philipp Sager (A/Black Falcon Team Textar) and Matthias Jeserich (D/CARTECH Motorsport by Nigrin) claiming the places behind him. Four Austrians contest the double-header event in front of home crowds this weekend: Rettenbacher (Eugendorf), Sebastian Daum (Dornbirn), Nicolas Schöll (Vienna) and Sager (Peggau). The Lechner Racing squad is based at Faistenau in the Salzburg district.

Thanks to his victory, ten Voorde has extended his lead in the championship. The racing driver from Boekelo ranks first with 110 points. Second place is occupied by Andlauer with 52.5 points ahead of Pereira (47 points). Race six of the Porsche Carrera Cup Deutschland will also be contested as part of the ADAC GT Masters weekend on the Red Bull Ring. The race takes off on Sunday at 11:40 am local time with Ammermüller starting from pole position. The German TV channel Sport1 broadcasts the national one-make cup race live.

Points' standings after 5 of 16 races