Porsche gives a home to 1.5 million bees in Leipzig

Porsche is getting involved in nature and species conservation work at its site in Leipzig: The sports car manufacturer is moving 25 bee colonies onto its grazing paddock in the plant’s off-road area, with each colony comprising around 60,000 bees.

A total of 1.5 million honey bees will be given a new home on the 40 hectares of untouched natural land. Bees are highly endangered – half of the 560 species of bee that live in Germany are threatened with extinction. According to information from the German beekeeper’s association (Deutscher Imkerbund), bee colony numbers have fallen from 2.5 million in 1952 to fewer than one million today.

“Introducing bee colonies makes a valuable contribution to protecting the species and is a clear step forwards in preserving biodiversity”, says Christian Schmidt, German Federal Minister for Food and Agriculture. After cows and pigs, bees are considered to be the most important production animal in Germany. By carrying pollen from flower to flower, they pollinate a large proportion of agricultural crops. Schmidt: “80 per cent of domestic plant species are dependent on insects for pollination.” Environmental influences, such as residue from agricultural pesticides, bacteria, viruses and parasites, have been contributing to the decline in bee numbers for decades. What’s more, the bees’ habitat is continuing to disappear. Due to their importance for biodiversity, bees are protected by the German law for nature conservation (BNatSchG) and the German ordinance for species protection (BArtSchV).

“Introducing the honey bee colonies is our way of contributing to the protection of domestic animals and plants” emphasises Siegfried Bülow, Chair of the Executive Board at Porsche Leipzig GmbH. In addition to countless wild plants, the bees will mainly visit hawthorn bushes, black locust trees and lime trees for honey production. One colony of bees will produce an average of around 55 kilograms of honey each year. The first yield is expected to be ready for harvesting in just a few weeks’ time. The honey will then be processed and used in employee catering at the Porsche plant in Leipzig. There are also plans to sell the honey at the Porsche Leipzig customer centre from autumn 2017.

Porsche has had a site in Leipzig since 2000, and has always taken its responsibility to the environment seriously. Alongside sustainable vehicle production, a unique pasture concept was developed, and the former military area was restored to a completely natural state. Specially established streams, wetlands and pasture areas created a natural habitat for numerous species of animals and plants. In addition to various types of flora and the newly introduced bees, the 99 hectares of grazing paddocks is home to countless species of birds, insects, frogs, hares and bats, as well as 27 wild horses and 75 aurochs. 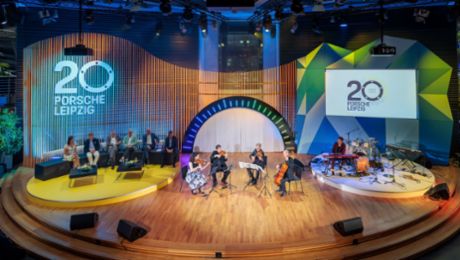