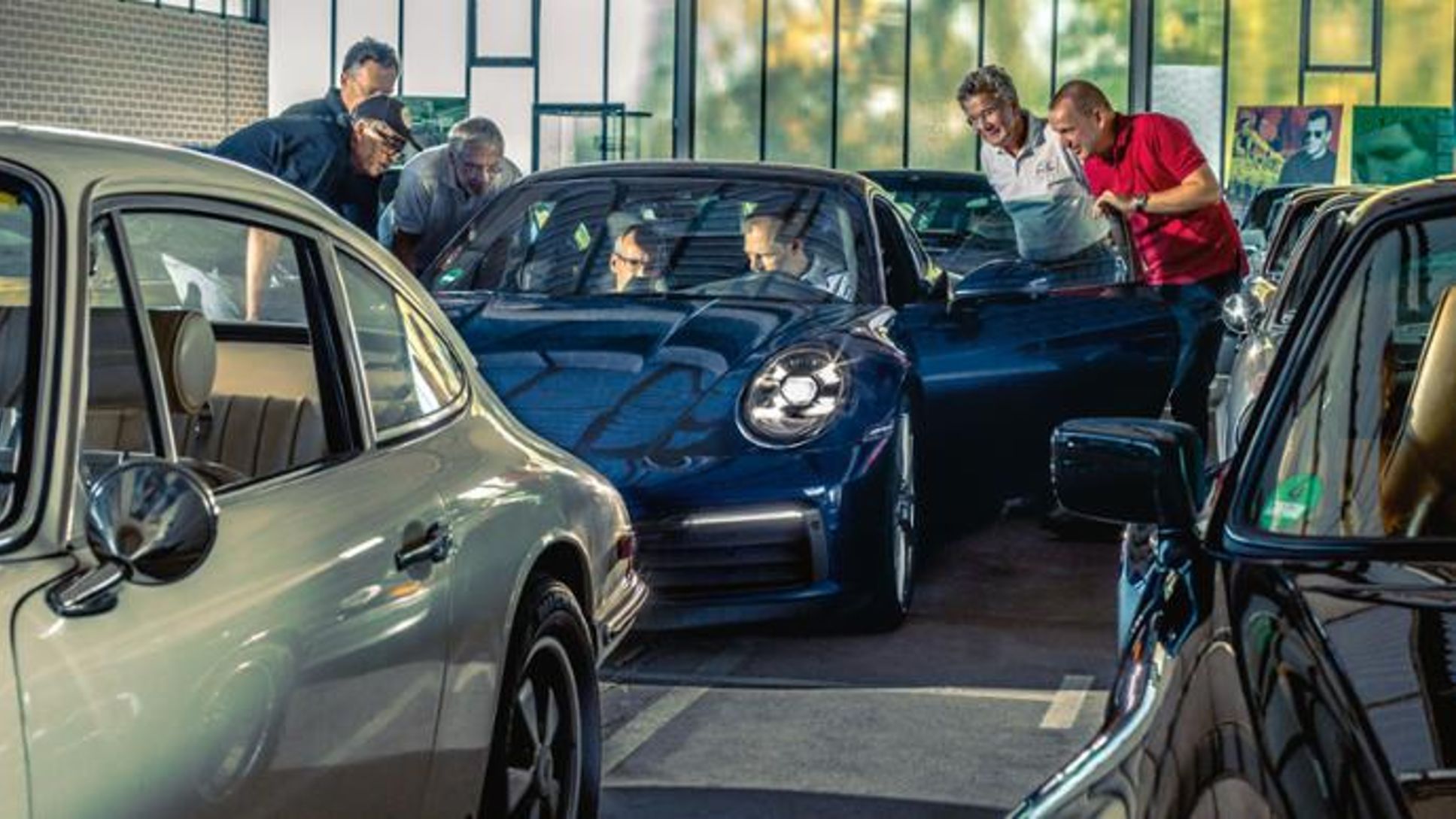 The heart of the brand. The center of the Porsche universe. The 911 is all that and more. But each new generation must do one thing above all else: convince its fans. That’s why one of the first stops for the new 911 is the Friends of Air-Cooled Flat Engines club in Weissach.

Weissach is where Porsche develops the sports cars of tomorrow. But in the small town northwest of Stuttgart, the company’s tradition is also maintained. This is because it’s also the home of the Freunde luftgekühlter Boxermotoren (Friends of Air-Cooled Flat Engines, or FLB for short), a company sports group for current and former Porsche employees living out their shared passion for the classic sports cars from Zuffenhausen. Founded in 2010 as a company sports group for laid-back pleasure drives, the FLB has since become an institution in the Porsche cosmos. The group’s get-togethers and drives bring together apprentices and racing legends, board members and retirees. And it’s no different on this special day.

Bernd Stadler, the man who directs development for Porsche Exclusive Manufaktur, enjoys the moments before the big reveal and the moment when he’ll present the new 911 exclusively to members. He reminisces: “There were company sports groups for everything—chess, yoga, volleyball. The only thing that didn’t exist, oddly enough, was a group concerned with the sports cars and history of Porsche.” That’s why Oliver Berg, project manager for motorsports GT road vehicles, founded the company sports group FLB. In 2011, together with Stadler, the support association of the same name was founded. “From one day to the next we had one hundred members. Today it’s almost six hundred.” The workshop hall and connected clubroom on the outskirts of Weissach were arranged by Herbert Linge, the former factory team driver and plant head who celebrated his ninetieth birthday this year.

The grounds fill slowly as the afternoon unfolds. More than two dozen FLB members have gathered, most of them accompanied by a classic 911. Time for the big moment. Stadler calls everyone over and leads them into the hall. There, between all the other sports cars, sits a car bedecked in a black cover. Furrowed brows—did some member have a bit of a faux pas while parking and now wants to hide the evidence? Stadler smiles as he and Berg pull back the cloth together. The new 911. Amazed glances, spontaneous applause—Porsche enthusiasts eagerly crowd around the unexpected guest.

“I’m seeing the new 911 for the first time today,” says a visibly moved Herbert Linge. He backs up a step or two, eyeballing the vehicle’s proportions. “The art of the designers is that every new 911 is completely different, yet immediately recognizable as a Porsche 911. It’s quite extraordinary how they succeed in that, time and again. I can’t wait to see how it behaves on the road.” Linge, who began his stint with Porsche as an apprentice in 1943, owns a 911 Targa from the 1970s and still enjoys taking part in the club drives. The FLB includes many other witnesses of bygone eras who once shaped the classic models of yore. “We have a lot of great people who were, for example, on hand for the races at Le Mans,” adds Peter Bäuerle, who was responsible for lightweight construction in the body development department and now organizes the get-togethers as the host of the club’s regulars table. “When they come here, bringing their photo albums and telling their stories from back in the day, everyone, from the interns to the project heads, hangs on their words.” Hans-Joachim Stuck and Walter Röhrl have made guest appearances in Weissach, as has former race director Peter Falk. California-based Porsche enthusiast Magnus Walker has sat on the club sofa more than once.

“I like the new 911 without reservation,” says Rolf Sprenger, who came to Porsche as a motor engineer in 1967 and later headed the customer center, founded the Porsche Exclusive special request department, and finally, in retirement, restored his white Porsche 911 Carrera RS 2.7. “The longer wheelbase is definitely a boon to driving stability. The new rear is a triumph as well. I wish it great success.” Gabriele Mahler-Kurzenberger finds it “amazing how the designers have retained the typical shape.” The Porsche Museum employee and her husband own two Porsche 911 Carrera RS 2.7s that once took part in the East African Safari Rally. She approaches the sports car and looks through the side window; she especially likes the new 911’s front headlights and the stitching in the interior.

The heat of the surrounding Porsches reinforces the scent of rubber and oil in the air. FLB members crouch, trace the lines of the body, examine the interior, compare details, and tap the lightweight construction components. Only for Mathias Fröschle is the new Porsche 911 an old acquaintance. He knows the new car down to its “skivvies,” as he and his department colleagues call everything under the smooth body shell. As the director of the Structure Predevelopment department he spent time with the new model a few years back. “It’s certainly strange to have worked on the planning of the new 911 years ago and now to watch other club members see the car for the first time and watch them react to it. The former employees who worked on previous generations of the 911 are often particularly critical. It’s therefore interesting to see what they pay attention to and what they notice immediately. The new interior in particular, which was substantially redesigned but also picks up traditions, was well received today.” To unwind from his development work on the Porsches of tomorrow, Fröschle enjoys tinkering with his 911 Targa, model year 1971, which he brought over from New York in its original condition and now regularly takes on vacation.

Past and future, tradition and change—for the members of the FLB, these aren’t contradictions but part of the whole. Because they understand Porsche. Club chairmen Stadler and Berg are visibly delighted that they could surprise the members with the new 911, which seems to have found the ideal company here among its predecessors. “When you view this gallery of forebears,” as Stadler puts it, “how the Porsche 911 has continuously developed over the years, you always think that it can’t get any better—and yet our engineers always manage to up the ante again. If you look around here and compare all the 911s from the different eras—the original 911, the G model, the 964, and the 993—it’s all a single design language that has been developed with great care over time.” For all the excitement generated by the evolution, the development director, who drives a Porsche 911 G model and a 914 in his private life, appreciates reminiscing about history. “Many style elements of the new Porsche 911 were inspired by the old 911s: the seam in the front hood, the shift and door panels in the interior, and the taillights with an end-to-end light strip all recall the sports cars of the 1980s and 1990s. It really is impressive how the designers manage time and again to reinterpret and continue the history of Porsche.”

Copious praise from the company sports group whose fervor for the air-cooled Porsche developments of the past gave the group its very name. Is the new 911 now one of them? Stadler doesn’t see why not. “The air-cooled flat engine defined the Porsche brand for decades from 1948 on. But time doesn’t stand still. Many of our members naturally drive more modern Porsches as well—from the 968 or Boxster 986 to the Cayenne. And as a true 911, the latest generation is, of course, more than welcome to join its forebears on our next tour.”