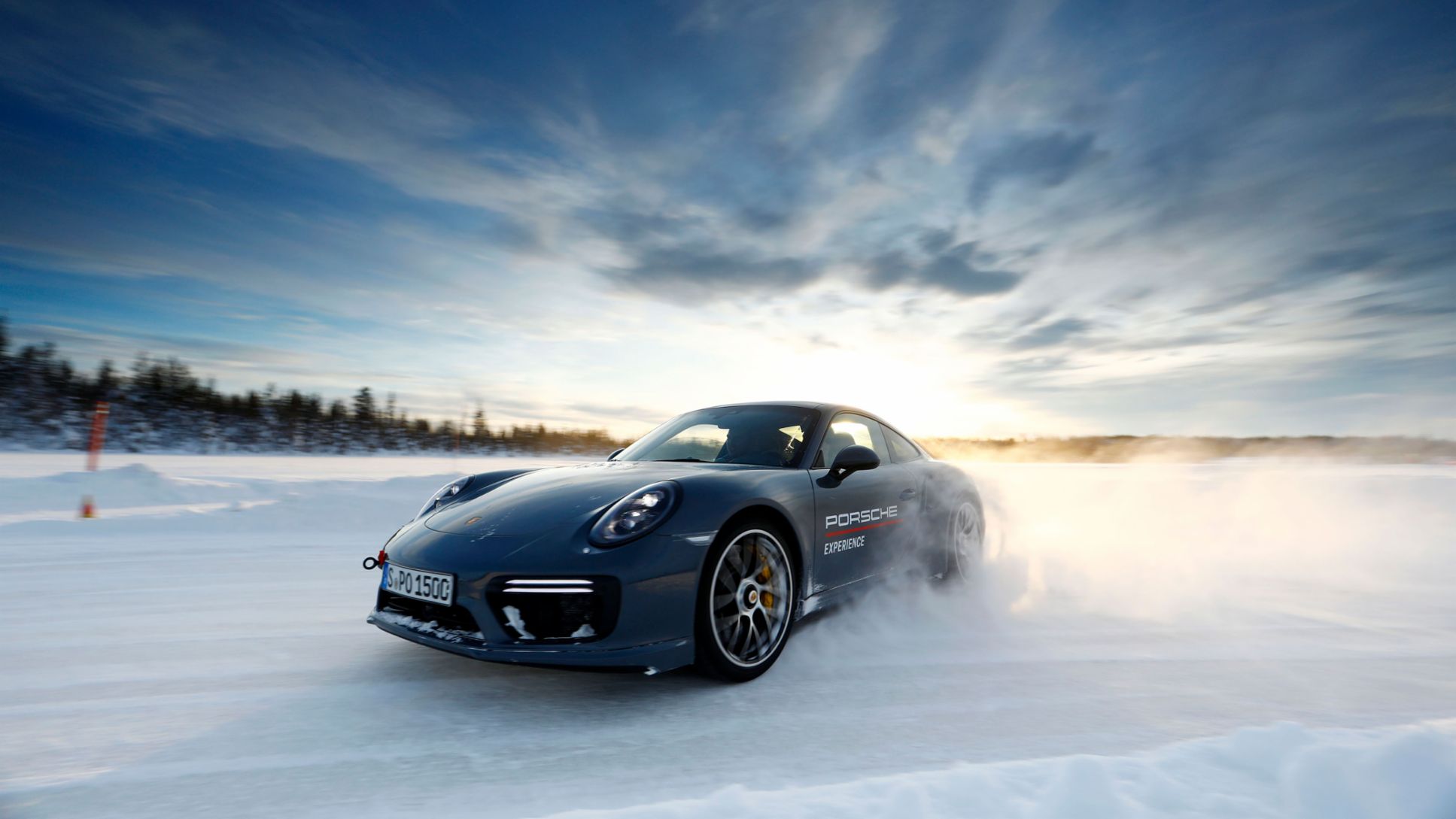 The 911 moves peacefully towards the opening of a bend in reverse gear; following a rapid tug on the steering wheel, it tears across the ice with the full force of the turbo engine in a perfect drift. One thing is clear: Everything except the all-wheel drive is a compromise. A guest article by Fabian Mechtel from the Porsche Ice Experience in Levi, Finland.

The plane has barely touched down on the snow-dusted runway and the engines just about turned off, when all becomes quiet once more. The snow, towering a metre high, seems to swallow every noise into complete silence. Combined with the bizarre ice sculptures, the sun, wind and not exactly balmy night-time temperatures on the barren landscape of northern Finland, this environment feels almost unreal.

This feeling is reinstated again the following morning when the 911 Carrera 4 GTS in Miami Blue dances through an area known only as “Forest 7”. The circuit is a wonderfully fluid racetrack carved through a pine-fringed moor. Tight corners, large radii, wild chicanes and intense, steep undulations, all provided on a silver platter, ready to showcase the 911’s many talents.

At some point in a 45-degree drift angle, as you rattle the steering angle limiter energetically, it’s all over. To ensure that its vehicles not only corner better but, most importantly, do so at a much higher speed, Porsche has invested a lot of time and effort in the design of the PTM (Porsche Traction Management) all-wheel drive. Normally, the front axle does practically no work and is only coupled when necessary – for example when there is too much slippage at the rear axle – by means of an active multi-plate clutch to provide propulsion. However, it is not only slippage that plays a role. Longitudinal and lateral acceleration, and the steering angle in particular, are important factors for torque distribution.

Of course, some beautiful powerslides can be achieved even without this mechatronic magic – even on spikes, the 911 makes light work of the icy elements – and where necessary cuts powerfully across every curve. But all this is only ever a compromise if not all four of the wheels are working for the drift. After all, just putting your foot down is, and always will be, only a brute force method. Drifting is normally a lot easier in these conditions.

Steer, brake, release the rear and let the car veer in. The longer you wait, the better. As the angle gets larger and larger, the all-wheel-drive 911 can then hold the line quite easily with gentle pressure on the accelerator and the steering stays poker straight. Four-wheel drifts without turning the wheels perhaps look unusual from the outside, but it works perfectly.

However, the reserves are far more important

If the 911 enters a bend too tightly or too wide, then you simply correct the steering. But g-e-n-t-l-y, turning the steering wheel just slightly from the centre position. When the bend curves inwards, the front end leans into the track, while more of a sweeping motion occurs on the outward curves. However, with the PTM, the angle can be adjusted almost exactly as required, and even the radius of the drift seems to have been chosen freely.

When the 911 jerks and needs the help of the spikes during a full-power drift, it's also helpful, alongside gentle steering, to give it a little less gas. Because if the centrifugal force is causing the Carrera 4 GTS to slide towards the edge of the bend, just a small lift off the accelerator will do. Don't adjust the steering angle, don’t brake, just come off the throttle gently. And why is that? Because you always slip on sheet ice anyway. You are midway through a movement that is about as unstable as a movement can be. So less acceleration means just a bit more traction, and a bit more traction means cornering instead of going into the hedge. Or, in this case, into a wall of snow.

If you understand that you need only control the 911 with the accelerator and brake and use the steering wheel only to hint at the direction – then you've made a breakthrough.

The supreme discipline: the 911 Turbo S

You also need to have understood this if you really want to fully savour the highlight of the experience: the “Handling 10” course in the Porsche 911 Turbo S. A perfectly prepared ice channel spanning more than two kilometres that exudes surreal drama in the red glow of the setting sun.

If the GTS was aggressive off the mark in the morning, the Turbo S is quite simply brutal. The most powerful of the 911 vehicles leaps forward from its starting position as if on a dry road. At the centre of the rev range, where all 750 Nm of overboost torque is concentrated, the rear axle pulls away for the first time. The wheels move through, the rev counter needle flicks up and Sport mode begins to work its magic with a cold smile. Engage, adjust, push through. The PTM ploughs across the ice, PTV Plus provides additional braking on the inward curves with the flat engine growling hoarsely from the exhaust; snow is thrown several metres into the air in the Finnish wilderness – at this moment you feel like you’re actually in a fairy tale.

Following the day’s lessons, the Turbo S becomes a powerful tool for tackling icy corners. No matter in what gear and at what engine speed the flat engine is challenged, it is always able to reach a full, never-ending torque peak that sends the 911 tearing into poll position. You can get it out of even the most difficult combinations in such a detailed way that it can render you speechless. You can actually send the car into the bends almost backwards because you know exactly how to use the 3.8-litre engine and never need to waste a thought about going too fast, too tight or too far away from the corners. Because suddenly the right solution is clear every time.

Whether it’s using the brake for a dynamic “Scandinavian flick” or just crudely using the full power of the engine: It can do anything, every time. It won't be long before you want to time to just stop. Because this spectacular feeling should never stop. Maybe it is precisely for this reason that it is called the Porsche Experience. Because it is the best experience that you can have on four wheels.

The Porsche 911 all-wheel drive is celebrating its anniversary. The Type 964 Carrera 4 went into series production 30 years ago. Since that time, the system has developed with every generation, resulting in the current Porsche Traction Management system that guest author Fabian Mechtel tested as part of the Porsche Experience in Levi, Finland.

The sporty all-wheel drive is a Porsche innovation – and a feature of series-production models for 30 years. 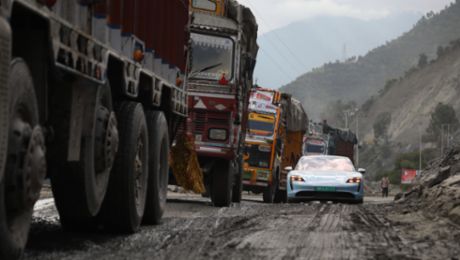 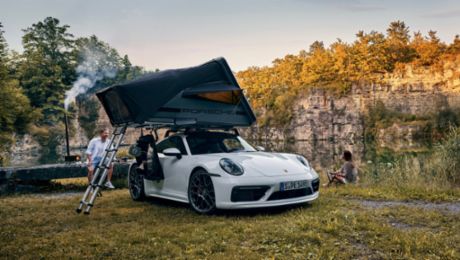 In the great outdoors: new roof tent from Porsche Tequipment

Experience the exhilaration of sports cars in a fresh way with the new roof tent from Porsche Tequipment.