The sporty all-wheel drive is a Porsche innovation. Invented by Ferdinand Porsche in 1900, revisited again and again, enhanced, and a feature of series-production models for 30 years.

Over the course of 118 years, one of the most powerful propulsion systems in the world has been created: Porsche Traction Management (PTM). The latest generation of the system is a feature of the 911 Carrera 4, 911 Targa 4 and 911 Turbo, the Cayenne and the Macan, as well as most Panamera models – in each case tailored and tuned to the specific requirements.

The principle philosophy for any Porsche with active PTM is the same: Enhanced driving dynamics, improved driving safety, increased traction for an even sportier driving experience. This is why Porsche developed its own all-wheel-drive system, which has long been the benchmark in terms of speed, compactness and intelligence. It distributes drive torque between the front and rear axles actively and very quickly. Permanent monitoring of driving status means PTM can be actively pre-set to respond to different driving situations: For example, sensors continuously monitor the speeds of all four wheels, the longitudinal and lateral acceleration of the vehicle, as well as the steering angle.

By evaluating all sensor data, it is possible to adjust the distribution of propulsion force to the front axle as quickly and effectively as possible. For example, if the rear wheels are at risk of spinning when accelerating, more propulsion force is transmitted forwards. On bends, however, propulsion force is distributed to the front wheels only to the extent that lateral support of the tyres on the front axle is not negatively impacted. The advantage of PTM is most evident in wet and snowy conditions: This is where the acceleration capacity of a Porsche with PTM is simply stunning.

PTM exploits the physical conditions in order to achieve optimum improvement of the driving dynamics. The axle loads change depending on the driving situation. This dynamic shifting of wheel load allows the tyres to transmit varying degrees of force during the journey based on the axle and position. For example, when driving in a straight line uphill, the rear wheels will bear a heavier burden and can transmit greater forces. In this case, PTM reduces the torque transmitted to the front axle.

The self-steering properties of the vehicle can also be manipulated in a targeted way thanks to longitudinal distribution of drive torque. Oversteering as an example: In line with the circle of forces, a tyre can only transmit a specific maximum force, which must be split between longitudinal and lateral force. The more strongly the driver accelerates and thus introduces longitudinal forces, the less lateral support the tyres of a driven axle can establish. When the remaining potential for transmittable lateral force is exhausted, the tyres slip (when taking bends, for example) and the rear end of a rear-wheel-drive vehicle pushes outward. If the all-wheel drive transfers more drive torque to the front axle at this point, the longitudinal force to the rear wheels is reduced and the tyres can transmit more lateral force accordingly. The effect: The vehicle stabilises.

A key benefit of Porsche Traction Management is that it works efficiently with all driving dynamics systems and these systems complement each other for the benefit of the driver. The most significant partner system is Porsche Stability Management, which controls power distribution to all four wheels on an even more individual basis using the anti-slip regulation (ASR) and automatic brake differential (ABD) functions. The optional Porsche Torque Vectoring Plus (PTV Plus), which also communicates directly with the PTM control system, delivers a further increase in the all-wheel driving dynamics, depending on the model and equipment. PTV Plus works on the basis of variable torque distribution through individual braking interventions at the rear wheels, as well as an electronically controlled rear differential lock, and improves steering behaviour and steering precision.

The technical basic function of Porsche Traction Management is the same across all model lines: As with a conventional rear-wheel drive, engine power is transmitted directly to the rear axle via the transmission. In principle, this means that every Porsche features the easy-to-control handling of a rear-wheel-drive. A second downforce on the transmission output is directed to a multi-plate clutch, via which the front axle drive can be engaged on a fully variable basis. With this hang-on system, two features in particular truly demonstrate the expertise involved: the intelligent control algorithm and the responsiveness of the system.

For the Cayenne and the Macan, PTM has been enhanced to include additional functions that guarantee extensive off-road properties for the SUVs. The control concept follows a clear rule: If the route is difficult, the car simply must remain easy to drive. All systems have been optimised for off-road use, with the aim of improving traction on off-road terrain. The driver can call up the off-road capabilities at the touch of a button, and with the Cayenne this can even be done in stages. 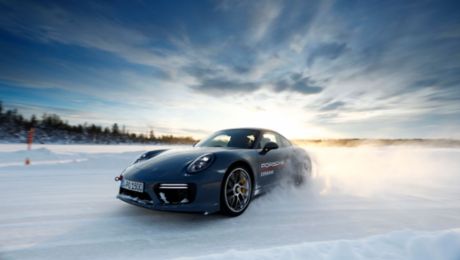 On the attack: Porsche Ice Experience in Finland

A guest article by Fabian Mechtel from the Porsche Ice Experience in Levi, Finland.