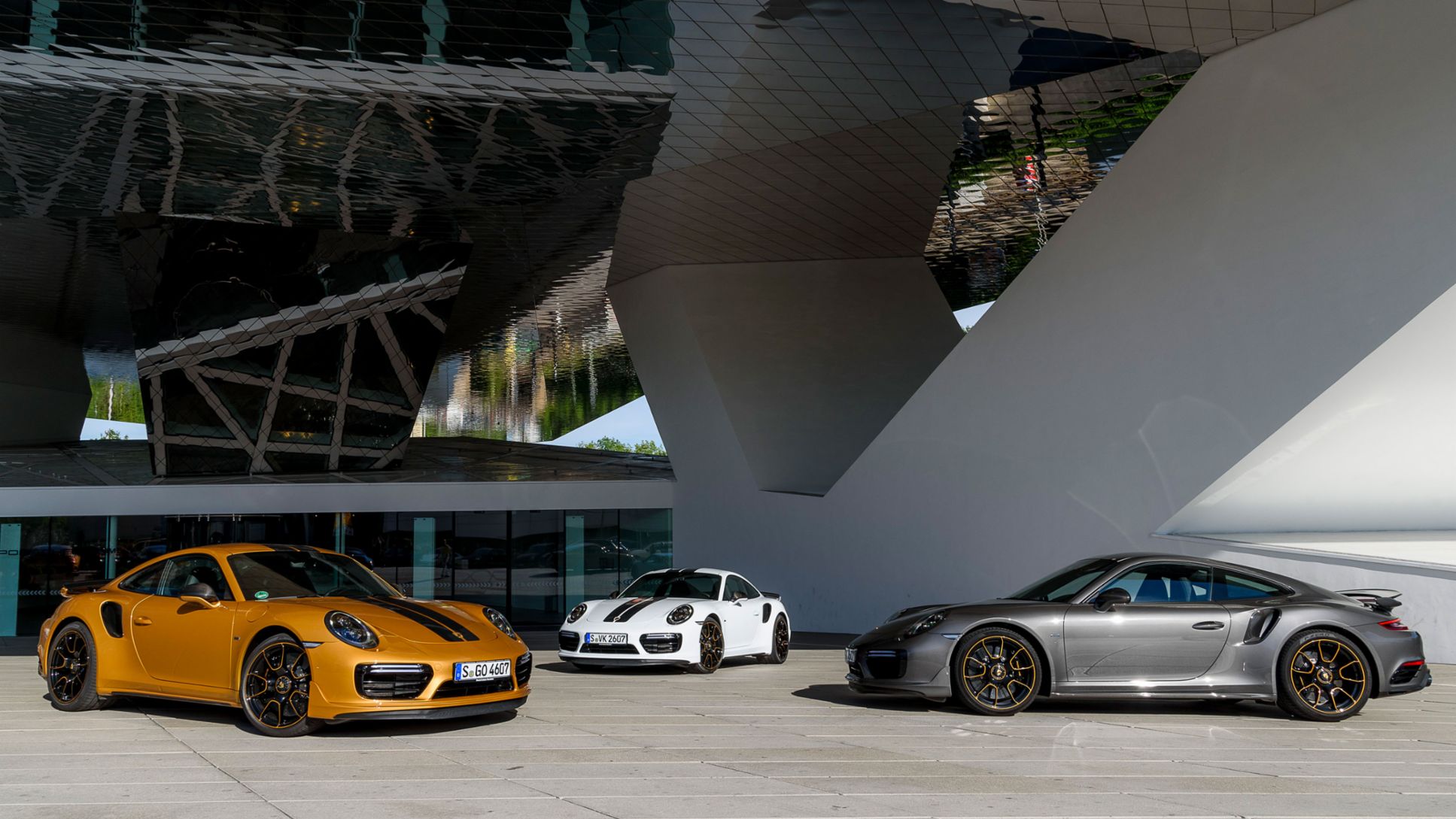 Porsche craftsmanship at its finest

The 911 Turbo S Exclusive Series is an exceptional release. Selected media representatives now had the opportunity to learn more about the vehicle and its details.

Many hours of hand-crafting have gone into each of the 500 limited edition models. Each car boasts high-quality surfaces and a perfect finish from the front spoiler to the adjustable rear wing. The high-tech material carbon fibre was selected for this purpose and is treated extensively by hand until a perfect surface quality with a feeling of great depth is achieved. For example, on the contoured roof, the bonnet, the housing of the sports design exterior mirrors, and the extendible rear wing.

To accentuate the carbon look with its fine woven structure, the roof and bonnet are masked off in the exterior colour before painting, allowing the carbon structure to shimmer through in the characteristic two-stripe design. The paint finish is applied by hand and boasts a high level of precision. The painting process is also alternated with intermediate sanding operations for a gleaming surface effect.

The interior features leather, Alcantara and carbon fibre. The decorative trims on the dashboard, the door panels and the centre console panel are also made of this lightweight material. In a car manufacturing first, gold-coloured metallic thread is woven into all carbon elements – a feature previously considered unfeasible. The high degree of individualisation can be seen in the matching vehicle document holder made of genuine leather embossed with golden yellow stitching, as well as the corresponding key fob complete with key finished in the exterior colour of the vehicle.

Even the leather strap features a reference to the car: It is made of the same luxurious leather and features the same yarn as used for the seats. Inspired by the performance of the exceptional sports car, Porsche Design has developed its own mechanical movement for the Chronograph 911 Turbo S Exclusive Series. The chronograph, equipped with flyback mechanism and Werk 01.200 movement, is a technical masterpiece in terms of precision, functionality and performance. The matching chronograph can only be individually configured by buyers of the small series and ordered at the Porsche Centre.

With 580 hp (combined fuel consumption 9.1 l/100 km; CO2 emissions 212 g/km), the Porsche 911 Turbo S is not short on power. The 911 Turbo S Exclusive Series goes one better: Higher boost pressure and specific engine control increase the performance of the engine. The 3.8-litre, six-cylinder biturbo flat engine of the 911 Turbo S Exclusive Series provides 446 kW (607 hp; combined fuel consumption 9.1 l/100 km; CO2 emissions 212 g/km), and therefore 19 kW (27 hp) more than the 911 Turbo S. Compared with the standard vehicle, the engine now has a permanent maximum torque of 750 Nm, delivering between 2,250 and 4,000 rpm. Two turbochargers with variable turbine geometry (VTG) help to ensure a dynamic response, high torque and extraordinary performance values. Porsche is the only manufacturer to use turbochargers with variable turbine geometry in conjunction with petrol engines. Forged connecting rods and aluminium pistons are taken from the series engine. The cylinders are made from an aluminium-silicon alloy.

The sports car can sprint from 0 to 100 km/h in 2.9 seconds, reaching 200 km/h in 9.6 seconds. This takes three tenths of a second off the time achieved by the 911 Turbo S standard model. The top speed is 330 km/h. But that’s not all: the 911 Turbo S Exclusive Series combines high acceleration and sprint qualities with excellent lateral dynamics. Journalists had the possibility to convince themselves of the performance of the exclusive 911 on a selected route around Stuttgart.

For more than 30 years, Porsche customers have been able to enjoy extensively customized individual pieces. The latest example being the 911 Turbo S Exclusive Series. A sports car limited to just 500 units. Individual and elegant. Patiently enhanced by hand in the new Porsche Exclusive Manufaktur department at the headquarters in Zuffenhausen, with 100% percent attention to detail. In the early days, vehicle customisation ex works was carried out by the special requirements department. In 1986 this was renamed “Porsche Exclusive”. Following the introduction of the small series, this department has rebranded as “Porsche Exclusive Manufaktur”, in order to underline the quality, individuality and craftsmanship of the extensive customisation programme.

To date, some 40 percent of all 911s have been customised by Exclusive Manufaktur on average. In addition, every Porsche customer is offered at least two equipment options from the customisation programme when configuring their car. There are numerous design possibilities to fit a wide variety of customer requirements. Porsche Exclusive Manufaktur offers a broad palette of customisation possibilities, ranging from standard finishing options for series vehicles to “country editions” and limited production runs.