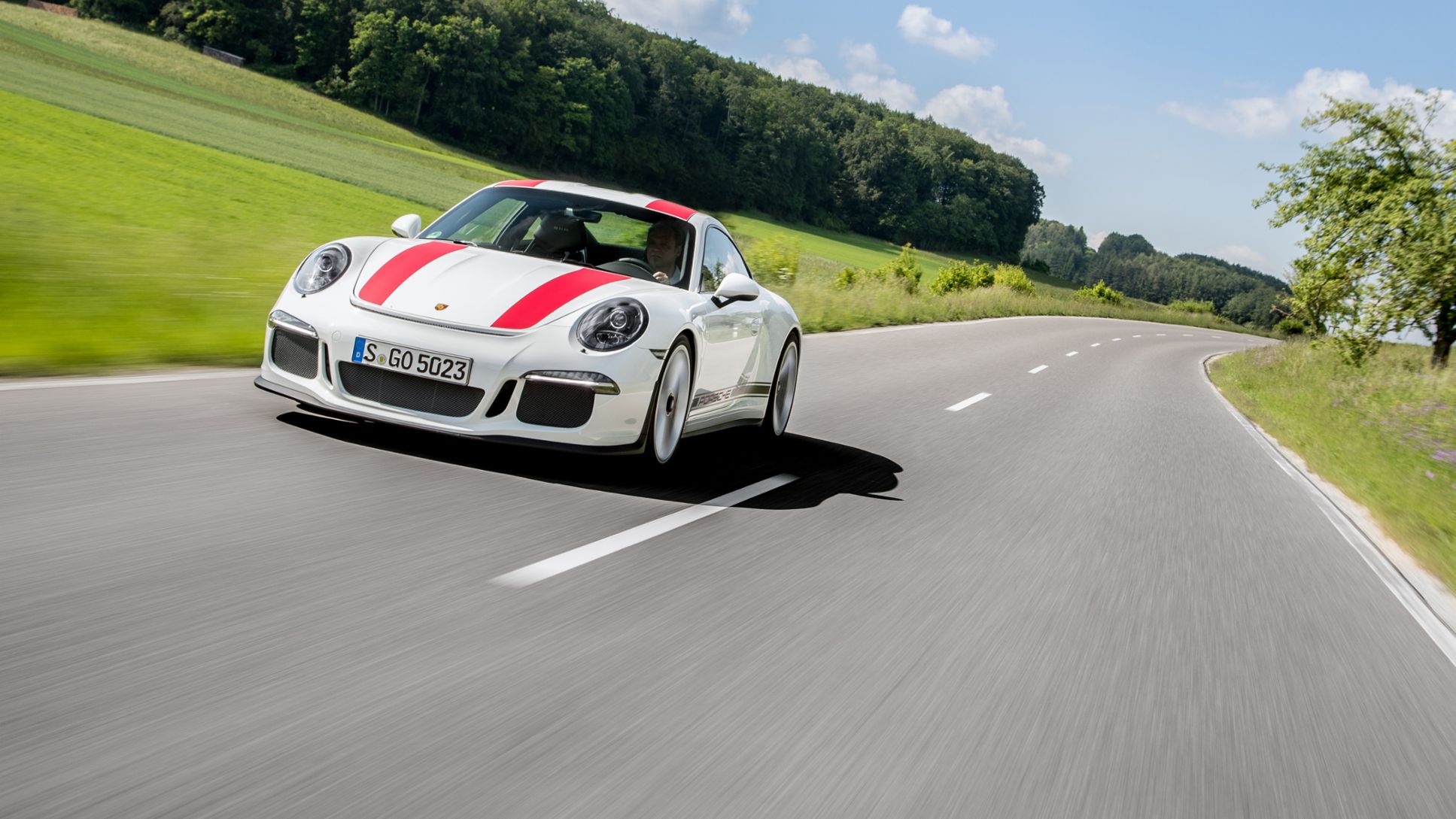 In the 911 R through south Germany: journalists test the purist’s sports car. Check out their verdict.

Its predecessor is a legend. Built in a limited edition series, the 911 R (R stands for Racing at Porsche) from the year 1967 was entered in rallies, the Targa Florio and world record attempts. Just like the original, the current high-performance sports car consistently relies on uncompromising lightweight design, maximum performance and an unfiltered driving experience.

In total, only 991 units of the 911 R have been built. The test drive through Baden-Württemberg that Porsche organised for journalists was suitably exclusive. Here is what the press has to say:

"We don’t buy sports cars to get to work quicker in the morning. We drive them for the experience. And the R is king of the 911 experience; it’s the purest expression of a sports car we’ve seen in an entire generation of Porsches. We now know not only that it’s possible for a modern 911 to be this good but also that there’s a huge, pent-up demand for this kind of machine."
motortrend.com

"For the purist, the 911 R would appear to be absolute perfection. The engine and manual gearbox are outrageously addictive, the performance almost savage and yet there’s an old-school delicacy to the chassis. There’s been plenty of hype surrounding this car, and it certainly lives up to it; the 911 R offers a rare and unforgettable intensity and a freakish depth of ability."
autoexpress.co.uk

"[...] The pleasure comes simply from that rather traditional sense of being at one with the machine, involved in its every action, influencing every outcome, not just directing the action but being in the thick it. Even when not near the limit of adhesion the 911 R is more mobile than the rigidly planted RS, asking more of its driver to maintain a pin sharp line and, yes, offering even more in return."
autocar.co.uk

"For the idea behind the 911 R was to produce the ultimate 911 street machine. While the GT3 RS is happiest on the track for which its vast wings and stiff suspension were designed, and the GT3 works best as an all-purpose intercontinental missile, the R was conceived for fun alone. [...] And so it proves: for all its extraordinary speed and state of the art technology, there is something pleasingly old school about the 911 R, a sense that what matters is not how fast you go, but how much fun you have going fast. It is a riot, and unquestionably the most involving, rewarding sports car this amount of money (in theory, at least) will buy. What it is not is the new dawn in fast car design those wishing to convert their orders into profit would have you believe. It is a wonderful car, an exceptional car and one that moves the 911 in an encouraging direction – but it is no greater than the sum of its uniformly excellent parts. It is, instead, simply the most enjoyable 911 of the current generation and, having been lucky enough to be offered one, they should be happy with that."
telegraph.co.uk

"Some said that the switch to turbocharged engines across the 911 range (save for the most extreme GT and R models) would be the car’s ruination. Noise and throttle response would be dulled and the car’s very soul would be forfeit. Um, nope… What Porsche has done is quite remarkable in fact."
irishtimes.com

"It really is a very special car to spend time with. You probably never doubted that it would be, but it’s been intriguing to find out what sort of 911 it is. The huge grip and impressive usability still mark it out as a 991, but there is also more lightness, character and subtlety to the way it handles than before. The highlight though is undoubtedly the way that the manual gearbox gives you so much more interaction with the incredible engine. Porsche has done absolutely the right thing by championing three pedals."
evo.co.uk

"It is crystal clear that the GT3 RS remains supreme as a trackday weapon, while the 911R is the pinnacle of the Porsche’s current road focused 911s. In the matter of horses for courses, the 911R is Porsche’s thoroughbred for the road."
9tro.com

"In isolation the 911 R is predictably wonderful to drive: forgiving yet playful, hugely fast but requiring skill and patience to extract its full potential, and capable of detailing the road surface without letting you get beaten up by it. [...] Having said all that, if I had to own one of the above to use exclusively on the road, it would be the 911 R. It’s under my skin and I can’t stop dreaming about it."
topgear.com