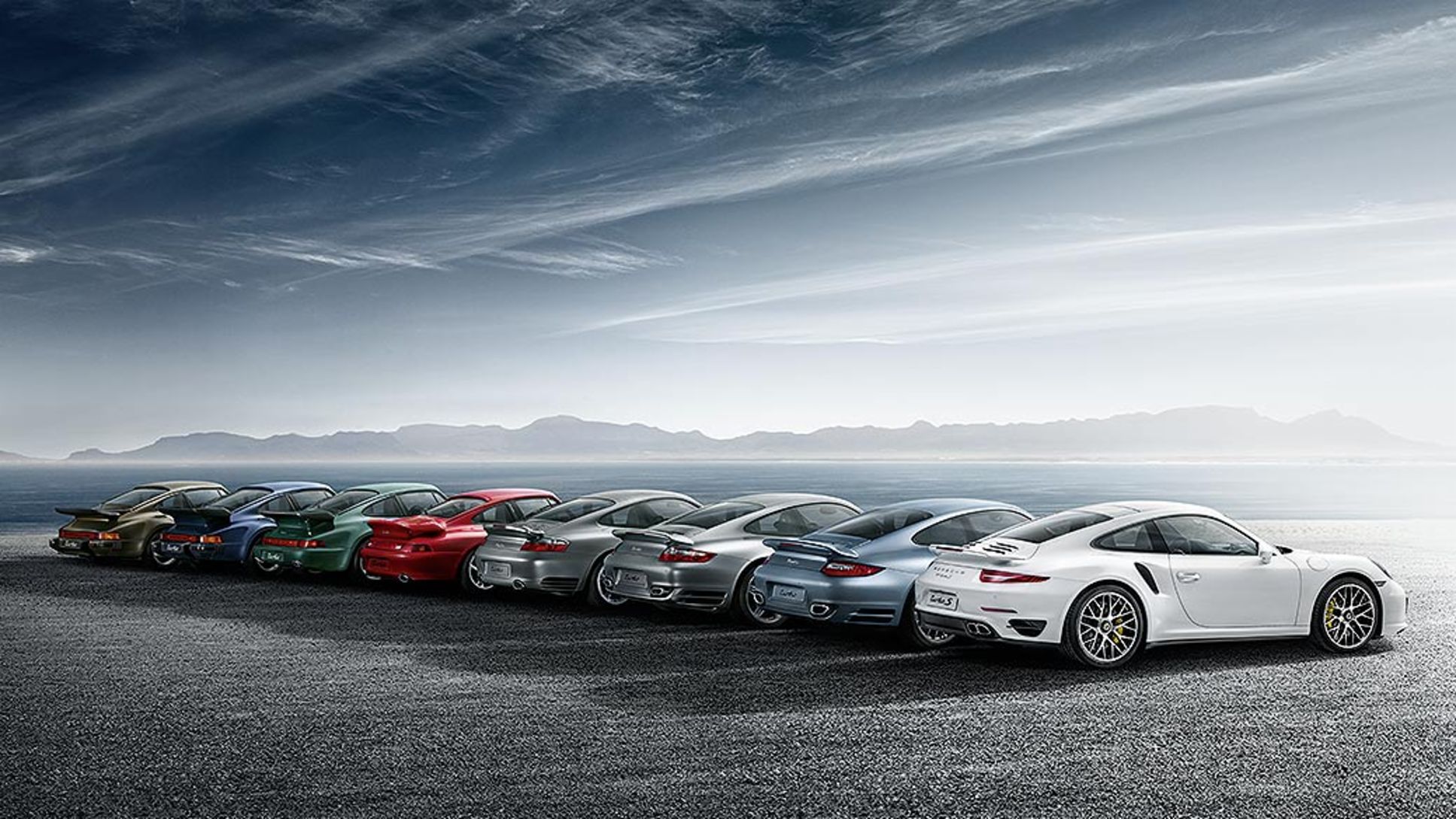 An expression of power

The turbo engine in the 911 celebrated its world première 40 years ago. The beginning of an extraordinary success story.

When the discussion still was in the beginning phase, the physics class had already begun. Hans Mezger and Thomas Krickelberg stroll through the Porsche Museum towards the engine gallery. Suddenly, an abrupt stop. The two bend over a display box. The variable turbine geometry is described here, a crucial feature of the current turbo engine. "I worked on that", Krickelberg said with restrained pride. "And what kind of hp do we have there now?" asked Mezger immediately. Now it is clear: whenever engine men meet, the topic is always performance. The two engineers from two eras immerse in their own world for a few minutes. They instinctively found the perfect place for the spontaneous shop talk. Above them is the word "Strong" written on the wall.

To describe the purpose in life and a big piece of the company philosophy you only need five letters at Porsche: Turbo! It is the expression of power of the highest art of engineering. The type of unit that up to this day crowns every 911 series and now the Cayenne and Panamera as well. To be correct, it is called an exhaust turbocharger, because the exhaust gas is used to drive a turbine wheel, which is connected to a compressor wheel via a shaft. This in turn presses air into the combustion chamber so that the maximum torque and the maximum performance can be increased – without the engine having to be enlarged. But "Turbo", that is more common and also corresponds with the writing on the back of the sports cars. The current 911 Turbo, which is just coming onto the market now, has a power output of 560 hp (Combined fuel consumption 9,7 l/100 km; CO₂ emission: 227 g/km), delivered by a six cylinder boxer engine with twin-turbocharging. Krickelberg knows the number by heart, Mezger nods his head with satisfaction in regards to this enormous power.

Only a few steps further the engine that has made the Porsche Turbo famous in the motorsports world – the TAG-Turbo, which was used by McLaren three times to win the Formula 1 World Championship – has been given pride of place. Made by Porsche, conceived by Mezger. Slowly it becomes clear why the man is called the "engine pope". For the 50 year old Thomas Krickelberg, he was the first boss that he had in the beginning of the nineties in Weissach. The memory is still present: "I was impressed about how he went from drawing board to drawing board in the construction department in order to discuss the current state of development with the engineers", Krickelberg explained. Back then, 60 people worked in the engine testing department; the entire development centre had 1700 employees. Today, the engine development department consists of more than 500 employees; the site in Weissach employs altogether around 5000 people. In 1956, Hans Mezger began in the "technical calculations office" in Zuffenhausen; he declined a job at Porsche Diesel with thanks – he was more interested in the speed of sports vehicles. Through the engine testing department, he came to the motorsports department in 1963, which he took over two years later. Thomas Krickelberg was just born back then, but established his first personal relationship with the sports cars from Zuffenhausen quickly thereafter: Upon entering school, he received a savings account with a credit of five Mark – Krickelberg selected the password "Porsche" for this. His occupational desire increased with his visits to the nearby Nürburgring.

The engineers' desire for more cannot be stopped

The invention by the name of the Porsche Turbo has bridged gaps between generations. It is associated with strength, but also with self-confidence. Because when the 911 Turbo – still in the prototype stage – was shown to the public for the first time in 1973, Germany was in the midst of the energy crisis. The question was who would even want to afford the seemingly unfashionable 260 hp for 65,800 Mark. However, the engineers' desire for more cannot be stopped and the courage that a sports car manufacturer carries in their DNA pays off for the company: The Porsche Turbo is a hero, even a synonym. Those who say Turbo normally mean Porsche – and vice versa.

Thus, one of the first headlines from back then is still a type of compliment today: "madness on wheels". However, Hans Mezger and Thomas Krickelberg are men of reason – a trait that comes with the job. They stand for the impact of an idea, for optimization in every regard. If before it was all about pure performance – particularly in racing – it is now also about fuel consumption, especially in series production. And both swear by the principle of the turbocharger. The Formula 1 engine, that Hans Mezger received a copy of when he left Porsche in 1994, is not the strongest engine that he built. But rather, the power house he built in the seventies for the 917 participating in the North American Can-Am series, which had a legendary 1200 hp. The racing car was so superior that the Porsche idea was already stopped by the rules a year later.

The race against the competition regulators makes engineers creative and keeps them fresh. That is why Mezger still sees motorsports as the best school – and when the current Formula 1 decided to return to the turbo engines, the technicians asked the spry 83-year-old residing in Freiberg am Neckar. While touring the Porsche Museum, he can get excited by the many details over and over again that are provided by the history of the company he was employed at for nearly 40 years. In the Porsche Museum, the man whose contribution to the company's success was once described as "unmeasurable" by the executive board of Porsche is still recognized by many visitors despite his obligatory Ray Ban aviator sunglasses.

Thomas Krickelberg's eyes light up again and again when he sees what the sports car builders did back then with their possibilities. Beliefs that the engineer likes to share. It becomes particularly clear by the turbo engine, where the charge pressure feeds the air into the combustion chambers like a hurricane, that the origin in principle also means the future for Porsche. "We protect technical traditions and pass them on", the passionate technician said and immediately explains: "Not because we idolize the ashes, but rather to keep the flame burning". Krickelberg emphasizes that the 911 and particularly the Turbo are the best examples for how ideas can be transferred into the future. "Just take the current engine downsizing: the principle to reach high performance with a small cubic capacity has already existed at Porsche for 40 years. That is turbo technology for everyday life. We are literally working our way up towards low emission values."

The core of the turbo message: "A lot of fun, a lot of performance".

Take-home message: Mezger, who already participated in the only pure Porsche Formula 1 victory in 1962 and also helped putting the finishing touches on the air-cooled engine of the ancient 911 in a technical emergency mission, agrees without hesitation. He speaks of the "most elegant and most efficient type of turbo charging". Now in front of a black 911 Turbo 3.3 from 1989, the two describe the core of the Turbo message in unison: "A lot of fun, a lot of performance".

The Turbo idea from Porsche was suddenly seen as trendy and characterized an era. However, the solution from Weissach and Zuffenhausen established itself on the street and the race tracks against the competitors particularly because the technicians were able to make the enormous performance "driveable". Even with the series vehicles, the feared "turbo lag" was quickly a thing of the past after the technicians around Mezger pushed forward several control systems. The decisive step was the so-called bypass system. Upon reaching the required charge pressure, a part of the exhaust flow is routed away from the turbine. Hans Mezger is still familiar with all of the details; ideas for a technical breakthrough are simply unforgettable. They are the fuel for engineers – whether they came into being at a drawing board like they did earlier or are created on a computer today.

Thomas Krickelberg and Hans Mezger agree that frequently mere sketches on a piece of paper can lead to the breakthrough – because such ideas absolutely refuse do abide by the rules of fixed working hours.