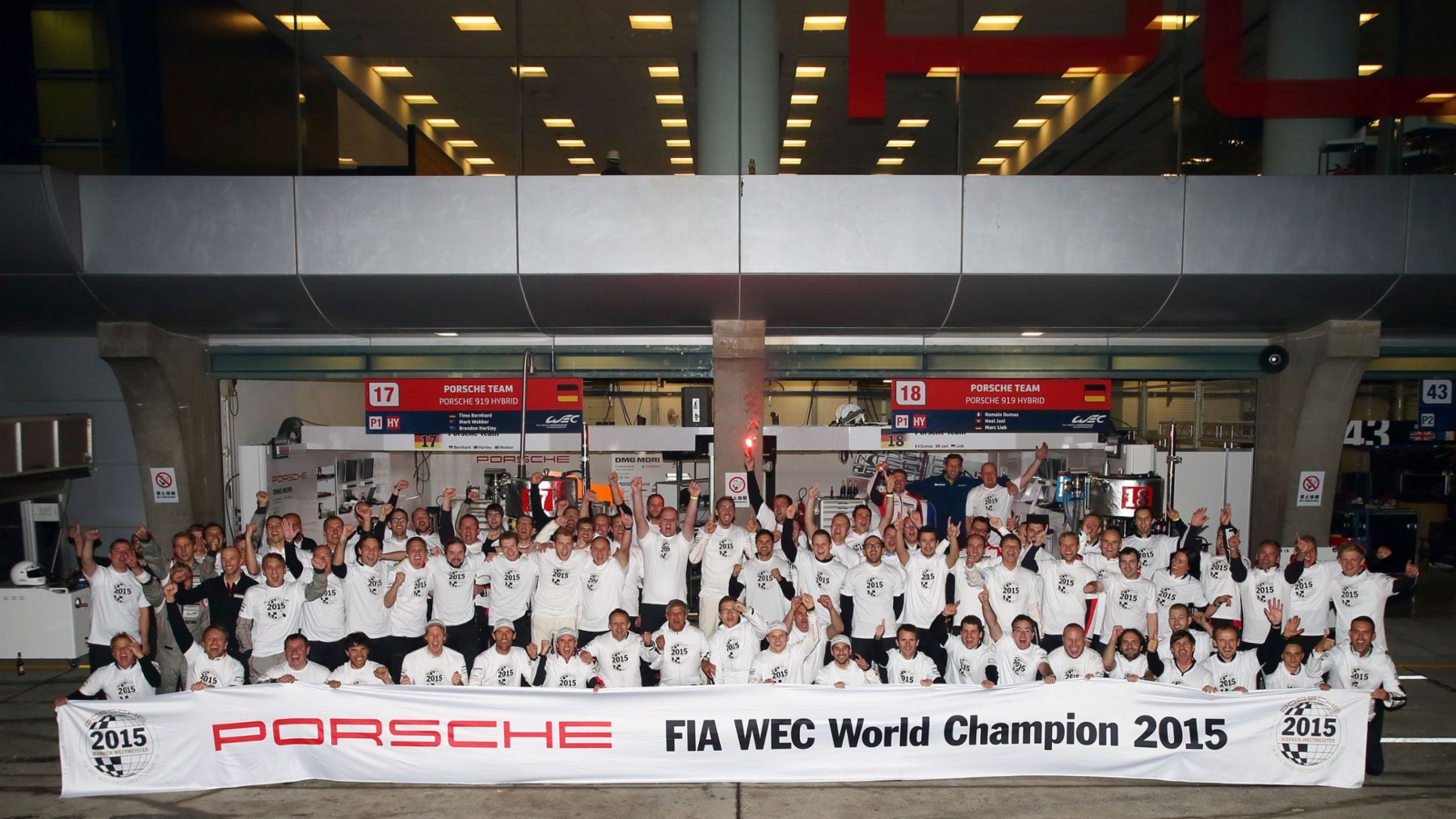 Porsche is World Champion. By bringing home another race win in the penultimate round of the championship at the six hours race, Timo Bernhard, Brendon Hartley and Mark Webber secured the manufactures’ title.

This is despite the team still being regarded as newcomers in what is only Porsche’s second season. After the young squad from Weissach took the endurance racing crown jewels with a one-two victory in Le Mans on June 14th, they have now added to their tally with the first World Championship title for Porsche since 1986.

The ground breaking and highly complex technology of the Porsche 919 Hybrid proved itself on the world’s race tracks in record time – and, even more important, it continues to prove its road relevance.

The 919 was created from scratch with lots of courage instead of copying the competition’s solutions. Its hybrid system combines road relevant downsizing turbo technology with efficient fuel direct injection for the two-litre-four-cylinder combustion engine and uses an entirely new state of a lithium-ion battery to store electricity from two different energy recovery systems – brake energy from the front axle and exhaust energy. The energy recovery from the exhaust is unique in the WEC and makes the 919 also able to generate electrical power when accelerating. The system’s power is almost 1,000 HP.

In a time lapse – the Porsche Team and the 919 Hybrid

2012
An office building and the workshop are built. Timo Bernhard and Romain Dumas are announced as the first drivers.

04.03.2014
Presentation of the Porsche 919 Hybrid alongside the 911 RSR at the International Auto Salon in Geneva.

20.04.2014
Podium finish at the race debut: Bernhard/Hartley/Webber come third at the six-hour race at Silverstone.

02.05.2014
First pole position in the second race: Jani/Lieb are fastest in qualifying in Spa-Francorchamps.

15.06.2014
Le Mans: Marc Lieb crosses the line in 11th place overall. Less than two hours before, the car was fourth when it had to pit for a long repair because of a gearbox issue. Almost at the same time Mark Webber, second in the race, had to give up due to an engine failure. Both 919 Hybrids had problems earlier in the race as well (fuel system No 14, suspension No 20), but caught up brilliantly. Towards the end of the race car number 20 was leading for a long time.

15.11.2014
For the first time both car crews make it onto the podium: In Bahrain Dumas/Jani/Lieb finish second in front of Bernhard/Hartley/Webber.

29.11.2014
For the first time the two 919s lock out the front row: In São Paulo Bernhard/Webber manage to achieve the fourth pole position for the 919 Hybrid.

30.11.2014
In São Paulo Dumas/Jani/Lieb achieve the maiden win for the 919. It is the sixth podium finish in the debut season and a success under dramatic circumstances, because Mark Webber suffers a heavy accident with less than 30 minutes race time left. Luckily he escapes without any severe injuries.

05.02.2015
In Paris Porsche announces Earl Bamber and Nick Tandy will complete the crew for the third 919 Hybrid.

12.04.2015
At Silverstone the two 919 lock out front row for the first time. Pole position goes to Bernhard/Hartley/Webber who retire in the race. Dumas/Jani/Lieb finish second.

02.05.2015
In Spa for the first time three 919s are entered – dress rehearsal for Le Mans. The trio takes the top three positions on the grid with Bernhard/Hartley/Webber being the pole sitters again. In the race they come third behind Dumas/Jani/Lieb. The LMP1 rookies Bamber/Hülkenberg/Tandy finish sixth.

14.06.2015
Bamber/Hülkenberg/Tandy take the 17th overall Le Mans victory for Porsche. Bernhard/Hartley/Webber make it a one-two. Dumas/Jani/Lieb finish the thrilling race in fifth. After three championship rounds and with the double points for Le Mans, Porsche now leads the constructors’ standings.

30.08.2015
The first appearance of the WEC in Germany brings another one-two: Bernhard/Hartley/Webber win at the Nürburgring ahead of Dumas/Jani/Lieb, who come second despite several stop-and-go penalties. In qualifying the order was vice versa. The 919’s new aero package brings a lot more downforce.

19.09.2015
In Austin, again, the winners are Bernhard/Hartley/Webber. In qualifying they had come second with Dumas/Jani/Lieb taking pole but finishing the race only in P5 after an electronic problem.

01.11.2015
With one race still to go, Porsche wins the Constructors’ World Championship. In Shanghai Bernhard/Hartley/Webber took their fourth win of the season with Dumas/Jani/Lieb once again crossing the line right behind them. No car other than a 919 had it made to front row in qualifying this year. In China the race winners had taken pole.

The tally after 15 races in total for the Porsche 919 Hybrid since its debut in 2014 is: eleven pole positions, six wins, four one-two wins, four fastest race laps, one World Championship title.

At the season’s finale in Bahrain on 21 November the drivers’ world championship will be decided. Currently Bernhard/Hartley/Webber are in the lead with 155 points ahead of the Audi drivers Marcel Fässler/André Lotterer/Benoît Tréluyer (143).