Michael Ammermüller has won the Porsche Mobil 1 Supercup 2018. A portrait.

To mess with his head – many of Michael Ammermüller’s rivals have tried to do this, but in vain. Even on the rare occasions when he is not the fastest on the track, the 32-year-old Bavarian from Rotthalmünster keeps his nerve and resolutely accumulates as many points as possible towards the championship.

Patience, persistence and hard work earned him the title. Winning the Porsche Mobil 1 Supercup in 2017 seemed to give the ex-Formula 1 test driver with the frameless glasses a newfound sense of ease in his bid to defend his title this season.

This relaxed approach to pressure was the key to success, especially at the season finale in Mexico. His flawless drive at the doubleheader event in Mexico City, which resulted in positions two and three, paved the way for him to claim the Porsche Mobil 1 Supercup crown. Ammermüller is only the fifth driver after Patrick Huisman, Richard Westbrook, Jeroen Bleekemolen and René Rast to defend his championship title in the international one-make cup.

Stepping into the role of the favourite also brought more pressure

With his typical composure and consistency, the seasoned specialist has tackled the Porsche Carrera Cup Deutschland and the Porsche Mobil 1 Supercup since 2012. Over the years contesting Porsche’s one-make cup series, Ammermüller emerged as one of the men to beat. However, stepping into the role of the favourite also brought more pressure. From 2014 to 2016 he secured third overall two years in a row and fourth once. In 2017 the Bavarian finally made the breakthrough: He was rewarded for his determination in 2017 with the Porsche Mobil 1 Supercup championship – his first ever GT title.

Success in the international one-make cup series changed the driver from Rotthalmünster in Bavaria. The Lechner driver is still level-headed and patient, but in the paddock of the Porsche Mobil 1 Supercup, Ammermüller displayed another side to his personality that no one had seen before: a new easygoing attitude. When he talked to his team or gave television interviews, the experienced racer always had a relaxed smile and his characteristic glasses on his face.

However, at the wheel of his Porsche 911 GT3 Cup, Ammermüller continued his unrelenting ways. He immediately underlined his claim to the title with a victory at the opening round in Barcelona, Spain – his only top result this season. Above all, however, Ammermüller impressed with his consistency: The seasoned specialist climbed the podium at seven races. Ammermüller finished second on the Monaco street circuit, at Britain’s Silverstone and Monza in Italy. At his home race in Hockenheim he took the flag in third place. Thanks to his steady performances, the driver for BWT Lechner Racing managed to stay at the top of the points table over the entire Porsche Mobil 1 Supercup season. Nevertheless, his pursuers kept the pressure on all the way to the finish straight of the season: In Mexico City, three drivers – series defender Ammermüller, Formula 1 simulator driver Nick Yelloly and Porsche Junior Thomas Preining – were locked in a fight for the title. At the decisive two final races, Ammermüller combined his wealth of experience with his newfound ease. These two ingredients contributed significantly to his success. With second and third place Ammermüller netted his second championship title in the Porsche Mobil 1 Supercup.

The racing driver is no stranger to rollercoaster rides throughout his career. As a talented single-seater driver, Ammermüller climbed the career ladder via the GP2 series to Formula 1 test driver with Red Bull Racing. In 2007, the Passau-born sportsman experienced a major setback when he seriously injured his hand in a racing accident. The consequences: surgery and a crossroads in his career. But Ammermüller didn’t give up on his dream to become a professional racing driver. He trained every day in the gym, and worked tirelessly with a physiotherapist. In 2010, Ammermüller switched to GT racing and contested the ADAC GT Masters. 2012 saw him change to the Porsche one-make cups, where he has now notched up his second title as champion.

Michael Ammermüller has a busy and full life away from the racetracks, as well. During the week, the trained car mechanic and economist works at his parents’ waste-disposal company in Neuburg am Inn. The best way for the southern Bavaria to switch off is on two wheels. He brings his racing bike to every Supercup weekend and each year pedals roughly 10,000 kilometres. Recently, however, Ammermüller has good reason to leave his bike in the garage, even during his spare time. At the end of 2017 he welcomed his daughter Leni Marie to the world. For the new father, this marks the beginning of a challenging balancing act: Professional racing driver, employee in his family firm and father. 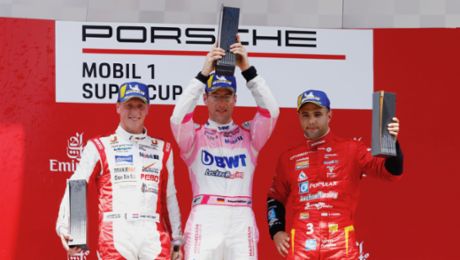 PMSC: A successful start to the season for Michael Ammermüller in the Porsche Mobil 1 Supercup. 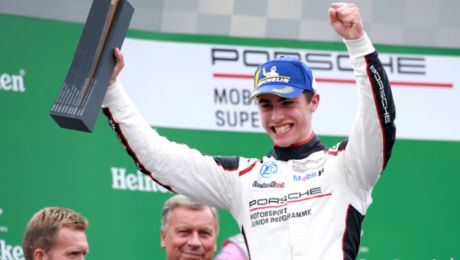 The fight for the title in the Porsche Mobil 1 Supercup remains gripping to the end. The race in Monza at a glance.