Again in the 2016 season, the Porsche one make race series have lived up to their reputation as a talent hotbed for international GT motorsport. All four Porsche juniors will climb the career ladder next year.

Germany’s Sven Müller (24) becomes a Porsche works driver. Porsche supports the Italian Matteo Cairoli (20) and Mathieu Jaminet (22) from France as “Young Professionals” in the continuation of their training to become professionals in endurance racing. Norway’s Dennis Olsen (20) now advances from the Porsche Carrera Cup Deutschland up to the next level of the Porsche motorsport pyramid to contest the Porsche Mobil 1 Supercup.

Müller began his motor racing career in karting. He spent four years racing single-seaters and was selected as a Porsche junior in the autumn of 2013. Over the following three years he tackled the Porsche Carrera Cup Deutschland and the Porsche Mobil 1 Supercup. In 2016 he secured the titles in both series as the best driver. He also helped Konrad Motorsport in the Carrera Cup and Lechner MSG Racing in the Supercup to claim the team championship titles. Moreover, Müller gave impressive performances at individual races in the VLN, the IMSA Weathertech Sportscar Championship and in the FIA World Endurance Championship WEC. At his first WEC outing at Spa in 2015, he and Kevin Estre scored an impressive third place. For the coming season he joins the circle of GT works drivers.

Cairoli and Jaminet continue their training at Porsche now as “Young Professionals”. Cairoli, who won the Porsche Carrera Cup Italia in 2014, competed in the Porsche Mobil 1 Supercup over the last two years and concluded his 2015 season as the best rookie and the 2016 season as vice champion. With four victories, he even earned one more race win than Müller, but his retirement at the season finale at Austin (USA) robbed him of his title chance. Jaminet contested his first season in the Porsche Mobil 1 Supercup, where he took home an early rookie championship title from Monza.

In the overall classification, the Frenchman ranked third after ten races. Parallel to his Supercup commitment, he tackled the Porsche Carrera Cup France and set a new record with twelve pole positions and twelve victories from twelve races. Both pilots will continue to receive support as Young Professionals thanks to their talent and their successes outside the brand trophy series. The two will support customer teams in international GT racing on behalf of Porsche.

In the 2017 season, Dennis Olsen follows in the footsteps of his successful predecessor. The Norwegian has completed a year in the Porsche Carrera Cup Deutschland as a Porsche junior and will advance into the Porsche Mobil 1 Supercup for next season. Porsche provides Olsen with a funding package of 200,000 Euro for his Supercup campaign and he will also benefit from the support of driver coach Sascha Maassen who will be at the racetracks each weekend. In addition, the Porsche juniors, who are joined for the 2017 season by the Australian Matt Campbell and Thomas Preining from Austria, will be trained in the areas of fitness, media and mental preparation.

“We are very happy with the way our Porsche juniors are developing. This is why we offer them every chance to gain a foothold in professional motor racing. It is obvious that the Porsche one make race series are the ideal launching platform for talented youngsters,” says Dr Frank-Steffen Walliser, the Head of Motorsport and GT Vehicles at Porsche. 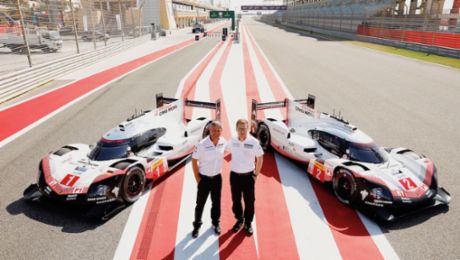 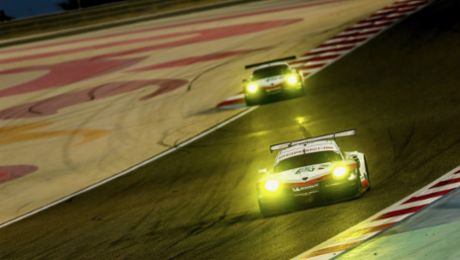 At the six-hour race on the Bahrain International Circuit, the Porsche pilots secured second place in the WEC.