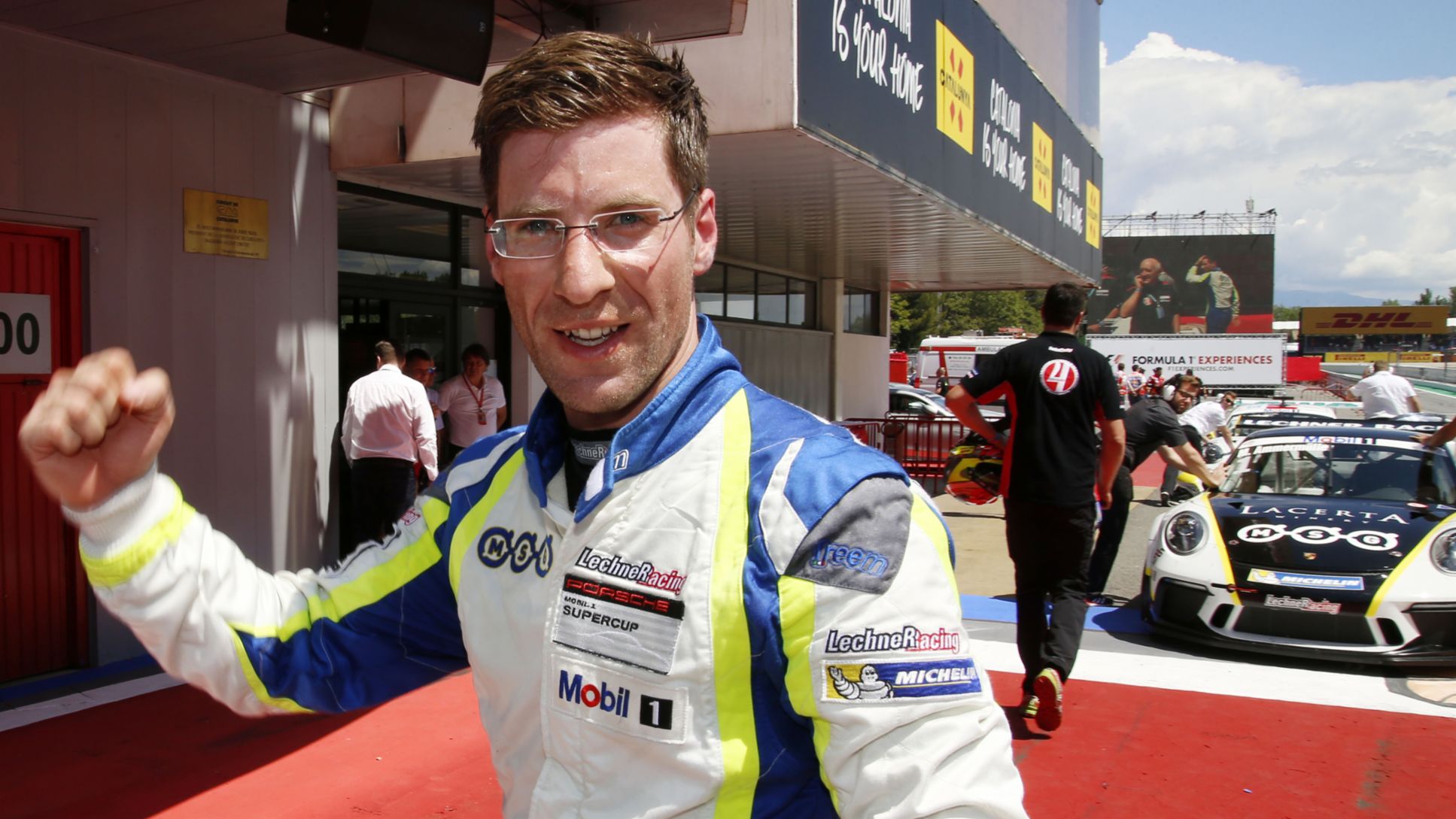 An exciting season-opening weekend for the Porsche Mobil 1 Supercup: At the Circuit de Catalunya on the outskirts of Barcelona, 31 drivers kicked off the anniversary season of the Porsche one-make cup series that has run as support to the Formula 1 races for the last 25 years.

In the newPorsche 911 GT3 Cup, Michael Ammermüller (D/Lechner MSG Racing Team) celebrated a perfect start to the season with two victories. On Saturday, he relegated Porsche Junior Dennis Olsen (N/Walter Lechner Racing Team) and Daniel Cammish (Lechner MSG Racing Team) to positions two and three; on Sunday Olsen again finished on second ahead of Porsche Junior Matt Campbell (AUS/Fach Auto Tech). Thanks to Ammermüller’s two wins, Germany leads the newly created Nations League. “It couldn’t have gone better, but in the last laps I came under huge pressure from Dennis. I didn’t make any mistakes and held on to my lead until the end,” explained Ammermüller.

Spectators on the well-filled grandstands were treated to a spectacular and action-packed second round. Porsche Junior Campbell started from pole position, however the 22-year-old Australian was not able hold onto his lead and had relinquish the front spot to Cammish in the first lap. With an adroit overtaking manoeuvre, Ammermüller swept to the front of the field and Cammish fell back to position four. Over the next twelve laps, the trio Ammermüller, Campbell and Olsen formed a spearhead at the front and battled for honours using every trick in the book. “I got off the line well but I opted for the wrong outside racing line and lost positions. After that I had to really fight hard. Finishing twice in second is a very good start to the season,” concluded Olsen. His junior colleague Campbell was pleased, as well: “I very happy with third place, especially since not everything ran as well as it could have. It’s my first Supercup season and you notice how incredibly close the competition is in this series. I’m excited to see how things continue.”

Germany holds the lead with 40 points

Monaco hosts the next round on the Supercup calendar from 25 to 28 May: Round three of the Porsche Mobil 1 Supercup will be contested on the legendary racetrack of Monaco. The 3.340-kilometre street circuit is a highlight on the race calendar, not least due to the unusual location of the paddock: All the vehicles stand under the big-top of the permanent circus tent Chapiteau de Fontvieille right next to the heliport. “Unfortunately I haven’t yet experienced a win at Monaco. This year I hope I have a little more luck in qualifying and then I’d like to bring home my first victory,” declared Ammermüller, who travels to the Principality as the championship leader after Barcelona.

A look back at race 1

Michael Ammermüller has won the season-opening round of the Porsche Mobil 1 Supercup in Barcelona/Spain on Saturday evening. The German from Rotthalmünster finished on first place for the Lechner MSG Racing Team and also secured maximum points towards the newly-created Nations League. Second place went to Porsche Junior Dennis Olsen (Walter Lechner Racing Team) for Norway, with Daniel Cammish (Lechner MSG Racing Team) from Great Britain bringing home points for position three and his home country. “The race ran perfectly for me. Following the short safety car phase after the first lap I was able to pull away from the field and bring victory home. I’m thrilled that I was able to earn 20 points for Germany today,” says Ammermüller.

Thirty-one pilots took off into the 2017 season in the new Porsche 911 GT3 Cup on the Circuit de Catalunya. In Saturday’s qualifying, Porsche Junior Matt Campbell (Fach Auto Tech) posted pole position. The Australian, however, fluffed his start and after the first lap was running in position six. From second on the grid, Ammermüller inherited the lead, which he defended over 14 laps to the flag. Behind the seasoned Porsche specialist, a fierce battle for the other grid spots raged. Cammish in second place came under repeated attacks from Olsen and it was only in the twelfth lap that the youngster managed to squeeze past Cammish. “I put him under constant pressure. Daniel made a mistake and I overtook him. It’s a great feeling to stand on the podium in the Supercup,” said Olsen.

Drivers from 18 countries tackle the races

Cammish ultimately finished in third on the 4.655-kilometre circuit. “I wanted to find my rhythm, but Dennis hampered me from doing this. Still, I’m thrilled to be on the podium.” In fourth place, Robert Lukas (PL/Olimp Racing by Lukas Motorsport) collected points for Poland. Porsche Junior Matt Campbell (Fach Auto Tech), who won the 2016 Porsche Carrera Cup Australia and advanced to the Porsche Mobil 1 Supercup, brought home fifth place. “Unfortunately I botched my start a bit. I let the clutch out too soon and almost choked my engine. I’ve learnt my lesson; I have to work on my start. Hopefully it’ll go better for me in Sunday’s race,” explained Campbell. His British teammate Josh Webster was flagged off as sixth. Victory in the amateur category went to Egidio Perfetti (NL/Momo-Megatron Team Partrax).

The grid at the Circuit de Catalunya features the most international lineup in the 25-year history of the Porsche Mobil 1 Supercup. Drivers from 18 countries tackle the races throughout the anniversary year, with 16 of them contesting the newly-created Nations League. “We’ve seen huge interest in the Supercup this season and we’re thrilled that many newcomers from the national one-make race series and new teams are joining the experienced regulars,” says Oliver Schwab, Manager of the Porsche Mobil 1 Supercup.

The next race of the the Supercup will be contested from 25 to 28 May in Monaco.