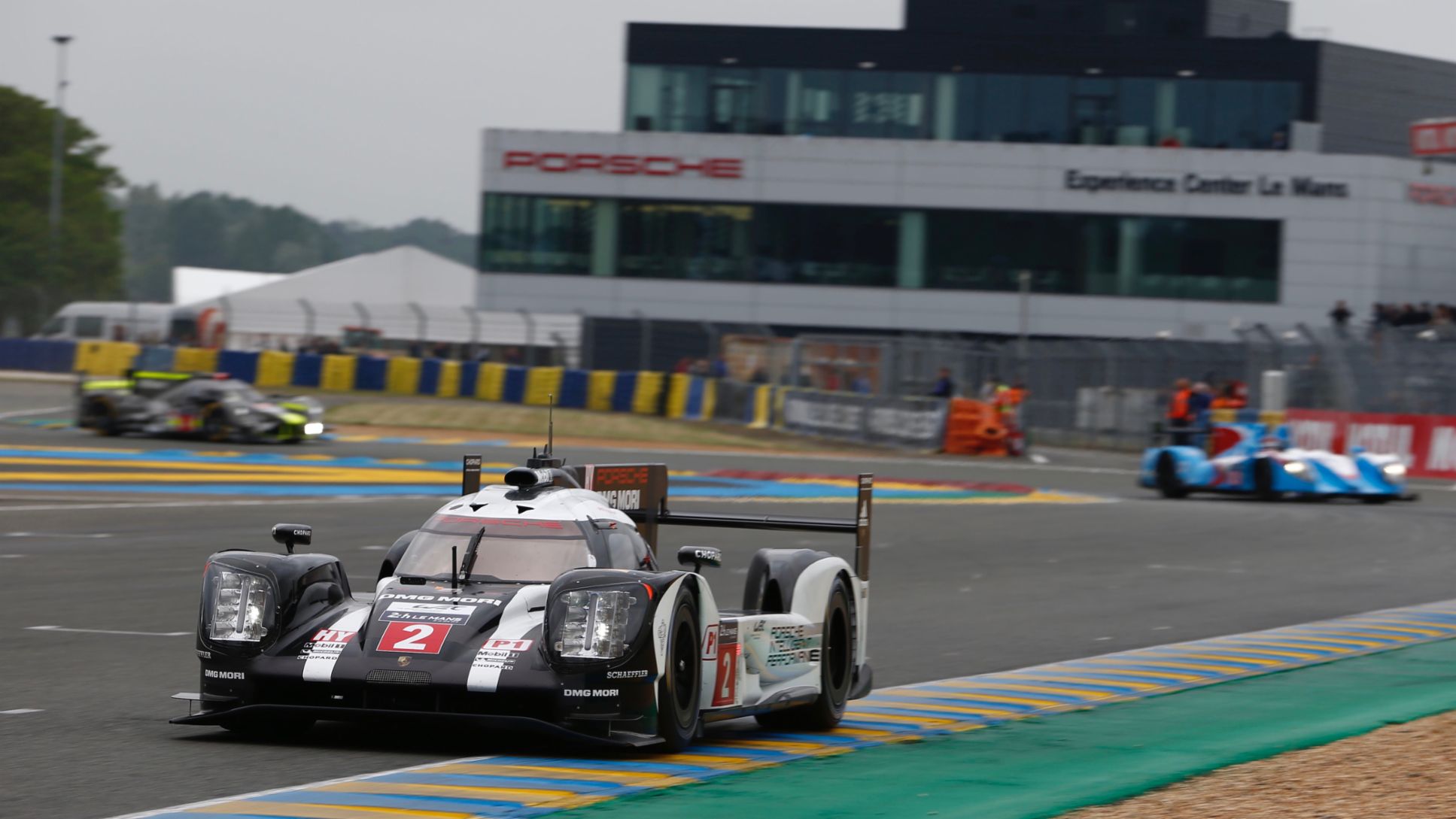 The countdown is on. The official pre-test on Sunday has marked the start of the final stage of preparations for the 24 Hours of Le Mans.

The 2016 Le Mans event has begun: The Porsche Team has used the official pre-test to set up the two Porsche 919 Hybrids for the 24-Hour marathon on June 18/19. Today provided the only opportunity to test on the 13.629 kilometre long Circuit de la Sarthe. The track includes 9.2 kilometres of what are normally public country roads. This part includes the famous Mulsanne straight on which the 900 HP strong Porsche Le Mans Prototypes (LMP1) go significantly over 320 km/h.

The fastest lap in a Porsche 919 Hybrid, 3:22.270 minutes, was achieved by Mark Webber shortly after noon. The Australian shares the car with Timo Bernhard (DE) and Brendon Hartley (NZ). Being the reigning FIA World Endurance Championship (WEC) champions, of which the Le Mans 24 Hours is the ultimate highlight, the trio’s car carries the number 1. With a lap time of 3:22.334 minutes Neel Jani was on the same level of speed in the number 2 sister car.

The Swiss leads the drivers’ standings in the WEC together with teammates Romain Dumas (FR) and Marc Lieb (DE). Especially in the beginning of the day, the track was slippery, but, unlike last year, it stayed dry. In total the two Porsche 919 Hybrids completed 173 laps (2,357.8 km) in seven and a half hours. The afternoon session was red flagged with 30 minutes to go at 17:30 hours for repairs to the heavily damaged guard rail following an accident. The day’s best time went to the number 8 Audi (3:21.375 minutes).

The Porsche Motorsport factory team campaigns two 911 RSR at the 84th running of the prestigious long distance classic with the overall Le Mans winners Earl Bamber (New Zealand) and Nick Tandy (Great Britain) in the GTE Pro class. The squad used this test to setup the 470 hp winning racer from Weissach for the most important race of the year. In testing, the tyres also played a vital role. At the season highlight of the Sports Car World Endurance Championship WEC, 60 cars and 180 drivers will line up on the 13.620-kilometre Circuit des 24 Heures on 18/19 June.

With an overcast sky and at first rather cool temperatures of around 15 degrees Celsius, more than 22,000 spectators came to witness the tests. In the two sessions, each scheduled over four hours (the second was stopped 30 minutes before the end due to an accident), all works drivers competing for the Porsche Motorsport team had a chance at the wheel. The 911 RSR with the starting number 91, in which Nick Tandy and the Frenchmen Patrick Pilet and Kévin Estre topped the time sheets in the GTE Pro class for a long time before ultimately being clocked as the second fastest, covered a total distance of 823 kilometres.

In the second 911 RSR with the number 92, Earl Bamber, Frédéric Makowiecki (France) and Jörg Bergmeister (Germany) also completed 944 test kilometres without incident. They too held the top test time to eventually rank third. At a round of the IMSA SportsCar Championship in Detroit lkast Saturday, Jörg Bergmeister scored second in the GTD class with the Porsche 911 GT3 R and after an overnight flight landed at the airfield next to the track just in time for the practice session. With 14 starts under his belt, Bergmeister is the Porsche GT pilot with the greatest Le Mans experience.

For the four Porsche customer teams who will also contest the race with the seventh generation of the iconic 911 sports car based on the 911 RSR, the main priority at the test day was on setting up the vehicles. In particular focus was the #77 nine-eleven fielded by Dempsey Proton Racing, with driving duties shared by Austrian Richard Lietz, the WEC winner of the FIA World Endurance Trophy in 2015 as the best GT pilot, and his works driver colleague Michael Christensen (Denmark).

Supporting them as the third driver is Le Mans newcomer Philipp Eng (Austria), the 2015 winner of both the Porsche Mobil 1 Supercup and the Porsche Carrera Cup Deutschland. They will also tackle the GTE-Pro class and covered 810 test kilometres. In the GTE-Am class, four other customer teams and two Porsche works drivers took part in tests for the race with the 911 RSR: Abu Dhabi Proton Racing with Patrick Long (USA) and KCMG with Wolf Henzler (Germany), as well as Gulf Racing and Proton Competition. With its unusual combination of racetrack and normal roads, the Circuit des 24 Heures places special demands on the drivers and their cars.

Comments on the pre-test

Fritz Enzinger, Vice President LMP1: “The return to Le Mans after last year’s success is a special moment for us. Along with our endurance test in Aragon, today’s test went without any issues. Looking at the time sheets, for sure we can expect an exciting race weekend. The top four cars are within 1.2 seconds on a 13.6 kilometre long track – this underlines what we have kept saying since the beginning of the year: The competition has become closer and this goes especially for Le Mans.”

Andreas Seidl, Team Principal: “It was a successful start for us, which makes us confident for the race. Both cars ran smoothly and we completed our entire test programme in dry conditions. In the morning session the focus was on set-up work, in the afternoon we worked mainly on long runs for the tyres. It was also important to practice all the Le Mans specific procedures with race control, such as safety car deployment and slow zones. As a team, we feel well prepared for the race week.”

The Le Mans 24-hour race takes off on Saturday, 18 June, at 15.00 hours CEST. Eurosport 1 and Eurosport 2 broadcast the entire race live. The free practice and the three qualifying sessions will also be aired live. Moreover, the “24 Minutes of Le Mans” magazine televises the latest news and interviews over the entire week.