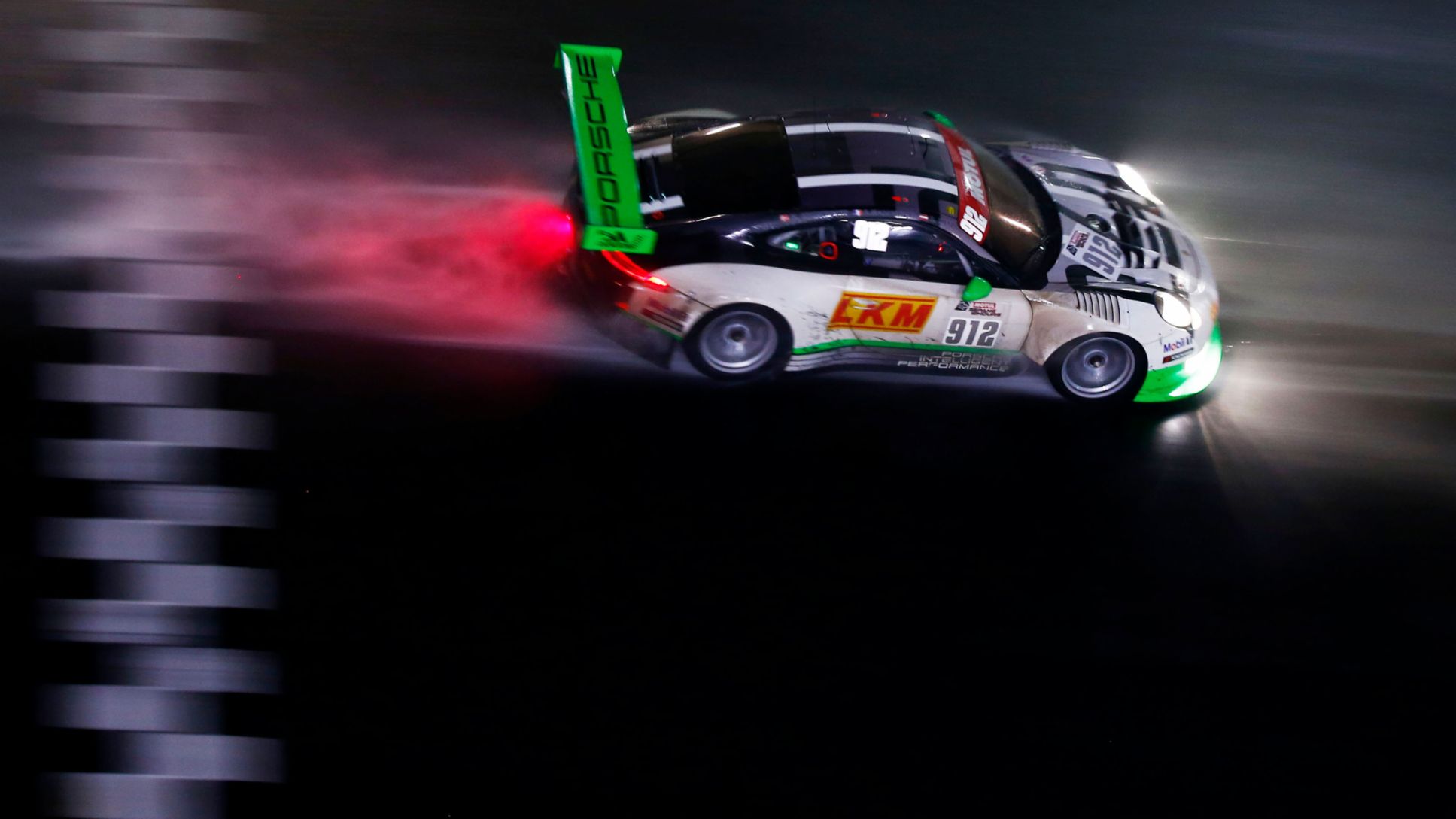 The 2016 motorsport season ended successfully for Porsche at the 12-hour race on the Sepang International Circuit: The second place has gone to Earl Bamber, Patrick Pilet and Nick Tandy. Their teammates have clinched fifth place at the final round.

With a spectacular charge through the field in torrential rain, Porsche works drivers Earl Bamber (New Zealand), Patrick Pilet (France) and Nick Tandy (Great Britain) secured second place with the Porsche 911 GT3 R fielded by Manthey Racing. Over a long stretch, their teammates Richard Lietz (Austria), Michael Christensen (Denmark) and Frédéric Makowiecki (France) were also on track for a podium spot with the customer sports racer from Weissach, but ultimately clinched fifth place at the final round of the Intercontinental GT Challenge. In hot and humid weather with temperatures of over 30 degrees Celsius, Richard Lietz took off into Asia’s most important long distance race from pole position. However, the Austrian, who last year won the FIA World Endurance Cup as the most successful GT driver, was beaten off the line by Earl Bamber. The 2015 overall Le Mans winner had taken up the race from directly behind his teammate on the third grid spot. This did not stop him from winning the sprint to the first corner and snatching the lead position in a top-class field of cars of 13 manufacturers. Bamber has lived in Malaysia for many years and has contested many races in Asia, making the 5.543-kilometre Grand Prix circuit on the outskirts of the capital Kuala Lumpur practically his home track.

After taking over the wheel of the 912 contender from Richard Lietz, Frédéric Makowiecki used the restart after the first safety car phase an hour into the race to manoeuvre himself into second place. The number 911 car continued to defend the lead spot, now with Nick Tandy at the wheel, who had won Le Mans with Earl Bamber. Later, the two 911 GT3 treated spectators to a spectacular fight against the best Ferrari. When heavy rain set in after four-and-a-half hours of racing, they lost their one-two positions during the pit stop and while switching to wets. After five hours, the #911 was sitting second, with the #912 on fourth.

Richard Lietz launched a breathtaking charge through the pack

Two unscheduled pit stops over the course of the race cost additional time: First, the brakes had to be changed on Frédéric Makowiecki’s 911 GT3 R, and two hours later – with the field again running on slicks – the brakes were also changed on Earl Bamber’s car. As a result, he also lost his podium ranking and was now lying fourth, just one place ahead of his teammate Richard Lietz. But on his home track, this was simply not good enough for Bamber. At the restart, after another safety car phase and with two hours to go, he launched a breathtaking charge through the pack, and carved his way spectacularly through deep water on the track. First, he swept past the fastest Ferrari, then the Audi running in second, to net another podium result for Porsche at the final race of the season.

The 911 GT3 R, which was designed in Weissach for worldwide GT3 series on the basis of the 911 GT3 RS production sports car, successfully concluded its first season in Sepang. The maiden race outing of the Porsche 911 GT3 R featuring the new, ultra-modern four-litre flat-six engine with direct fuel injection was in January at the Daytona 24-hour race. Afterwards, the racer celebrated successes in many international racing series, including the IMSA SportsCar Championship, the World Challenge as well as the Nürburgring VLN Long Distance Championship on the demanding Nordschleife.

Dr Frank-Steffen Walliser, Head of Porsche Motorsport: “This was a race of highs and lows in very difficult weather conditions. Initially, we had a bit of a problem getting our wet tyres to really work. Once we got to grips with that the performance was there immediately. After the safety car phase, Earl put in a commanding drive to second place. That was really great. Although we were a little unlucky with the caution phases, all in all it was a good race.”

Earl Bamber (911 GT3 R #911): “It’s fantastic to finish the season on the podium. We were going very well in the dry and we were leading for a long time. When it began to drizzle we had problems with the tyres. But once heavy rain set in we were back in strong form. It was a very difficult race, but a good result for Porsche.”

Patrick Pilet (911 GT3 R #911): “This was our first time competing in Sepang and initially we had to get used to the many different conditions – and also to the fact that the weather forecast wasn’t quite as reliable as in Europe or the USA. What’s more, even if its damp, you can drive almost as fast on slicks as on rain tyres here, because even when it rains the asphalt hardly cools at all. Still, the last race of the year was a great experience.”

Nick Tandy (911 GT3 R #911): “Our 911 GT3 R performed very strongly in both dry and wet conditions. We were able to post very quick lap times. However, the changing conditions posed problems. That’s where we lost time.

The twelve-hour race on the 5.543-kilometre Grand Prix circuit with its 15 corners was first held in the year 2000. Because of its significance for the important Asian market, reputable automobile manufacturers tackled this race right from the start. This season, the Malaysian event is part of the newly-created Intercontinental GT Challenge as the third round alongside Australia’s Bathurst 12 Hour and the 24 Hours of Spa in Belgium. The fourth race planned for Austin/USA did not take place. The idea of contesting four long-distance races on four continents is now expected to be realized in 2017.

For Earl Bamber, the 2015 overall winner of the Le Mans 24 Hours as well as champion of the Carrera Cup Asia in 2013 and 2014, Sepang is almost like a home race. He lived in Kuala Lumpur for many years. Bamber is joined in the cockpit of the #911 Porsche 911 GT3 R with his Le Mans teammate Nick Tandy as well as the 2015 IMSA GT Champion, Patrick Pilet. Another strong driver line-up mans the number 912 Porsche 911 GT3 R: Richard Lietz won the 2015 FIA World Endurance Cup as the best GT pilot. He teams up with Frédéric Makowiecki and Michael Christensen.

The maiden race outing of the Porsche 911 GT3 R featuring the new, ultra-modern four-litre flat-six engine with direct fuel injection was in January 2016 at the Daytona 24-hour race. In developing the 911 GT3 R, the engineers placed particular emphasis on lightweight design, better aerodynamic efficiency, a reduction in fuel consumption and further improved driveability. In its debut season, the 911 GT3 R celebrated many successes in international racing series, including the IMSA SportsCar Championship, the World Challenge as well as the Nürburgring VLN Long Distance Championship on the demanding Nordschleife.