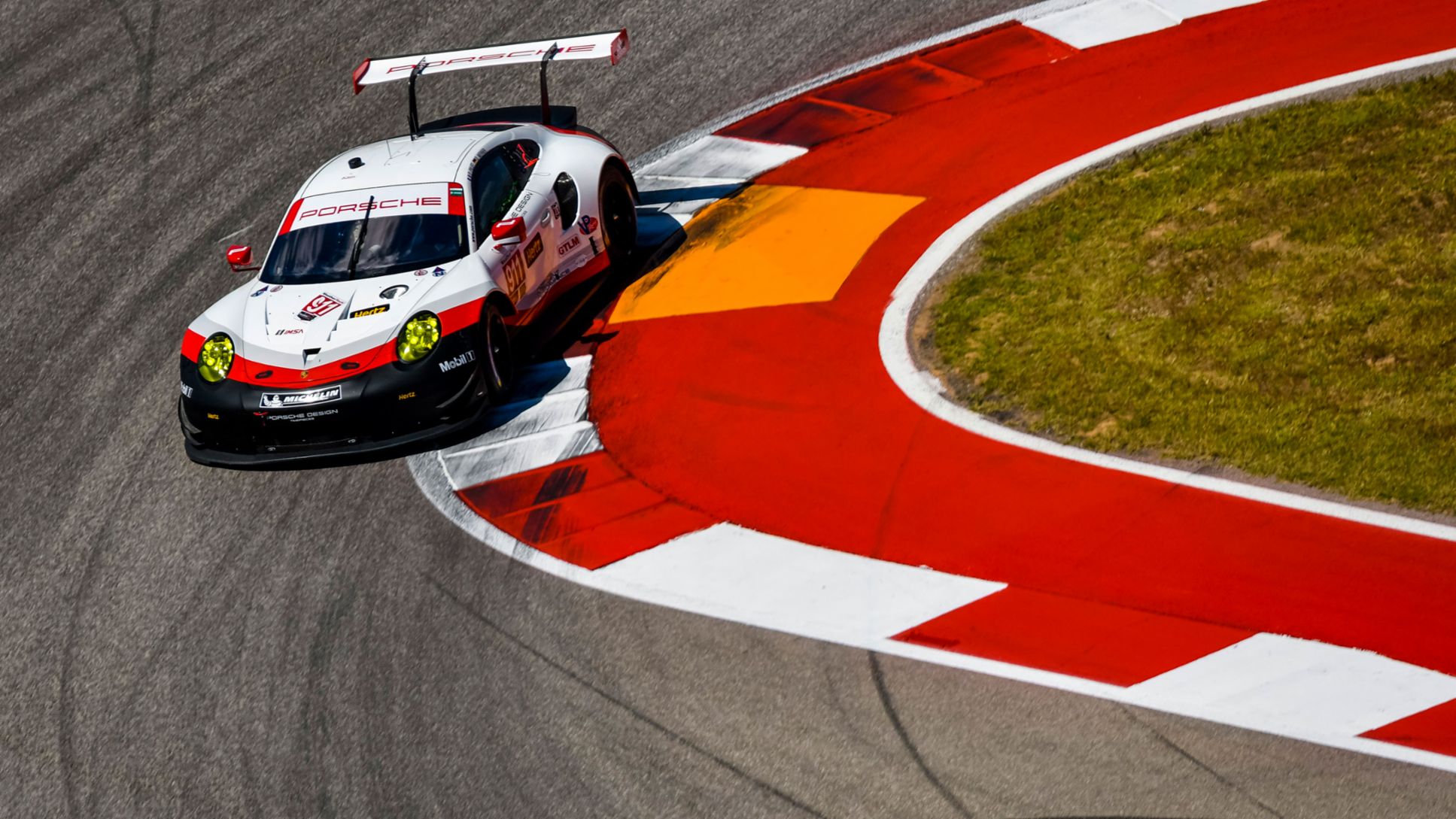 The qualifying for the Advance Auto Parts SportsCar Showdown in Austin turned into one of the most fiercely-­contested of this season’s IMSA SportsCar Championship.

How the qualifying went

On the Circuit of the Americas, the 5.513-kilometre Grand Prix racetrack near the capital of Texas, only 25-hundredths-of-a-second separated Frenchman Patrick Pilet’s Porsche 911 RSR from pole position. Facing extremely tough competition in the GTLM class, his fastest lap time, however, was only enough to secure the seventh grid spot. He shares his #911 Porsche 911 RSR for Saturday’s race with Dirk Werner (Germany). Wolf Henzler (Germany), who steps in as a teammate to Laurens Vanthoor (Belgium) to replace Kévin Estre (France) while he contests the WEC round in Spa, clocked the ninth quickest time in the second 911 RSR (#912) fielded by the Porsche GT Team. All competitors in the GTLM category ended up within one second.

Porsche Young Professional Mathieu Jaminet (France) celebrated a sensational start in the IMSA SportsCar Championship. Contesting the GTD class in the 911 GT3 R of Alegra Motorsports, he clinched pole position. The Porsche customer team had kicked off the season with the 500+hp racing car from Weissach with a class victory at the 24 Hours of Daytona.

Dr Frank-­Steffen Walliser, Head of Porsche Motorsport: “The Circuit of the Americas is a fantastic and very demanding racetrack, so it’s a real challenge for our drivers and teams. We’re showcasing two new Weissach-­developed cars to the many Porsche fans who travel from all over Texas to see the race: The 911 RSR is run in the IMSA SportsCar Championship, and the 911 GT3 Cup in the GT3 Cup Challenge USA. What we want to achieve with the 911 RSR in Austin is obvious: After securing third place at Long Beach and second at Daytona, the first win of the season has to be our goal.”

Marco Ujhasi, Overall Project Manager GT Works Motorsport: “Setting up the cars for Austin is the real challenge. The Circuit of the Americas, which was purpose-­built for Formula 1, is a wonderful racetrack that leaves nothing to be desired with its diversity. For this reason, the key to success is to achieve the right vehicle setup, which means finding the right mechanical setup for the slow corners, and the right aerodynamic setup for the fast corners. We did some pre-­season testing in Austin with the 911 RSR and we hope that we can now turn some of the insights that we gained into a strong performance and a good result.”

Steffen Höllwarth, Programme Manager IMSA SportsCar Championship: “We’re not satisfied with positions seven and nine. We didn’t expect to be on pole, but we’d secretly set our hopes on the second grid row. Unfortunately, we didn’t manage to pull together the whole package into one lap. Nevertheless, we won’t be sticking our heads in the sand. In tomorrow’s race we have two hours and forty minutes to make up positions. The key to success will definitely be tyre management, and we’ve already worked very well in this direction during practice.”

Patrick Pilet (911 RSR #911): “The result is not exactly what we’d hope for. The team worked well and tried everything, but unfortunately it wasn’t enough for a better grid position. Still, I’m feeling confident that we’ll perform better in the race and be able to work our way up the field.”

Wolf Henzler (911 RSR #912): “It was a difficult qualifying for us. We’d expected we would land further up the grid. I was driving a much better lap, the tyres were great – but then I botched a corner and lost several tenths. Anyway, all of our preparations were with an eye on the race, so I’m sure that things will go better for us over the distance.”

Mathieu Jaminet (911 GT3 R #28): “I know the Circuit of the Americas from the Porsche Mobil 1 Supercup, however the fact that I secured pole position here with the 911 GT3 R still came as a surprise. I hope we can perform as strongly in the race.”

The Circuit of the Americas (COTA) with its combination of fast and slow corners is a challenging and very popular circuit for racing drivers. Austin too is worth a visit: the city has a vibrant student atmosphere and nowhere else in the USA has as many clubs and bars with live music.

Sharing the #911 cockpit of the RSR 911 in Austin are Patrick Pilet (France) and Dirk Werner (Germany). Laurens Vanthoor (Belgium) is joined in the cockpit of the #912 sister car by a new teammate: For this race, Wolf Henzler replaces Kévin Estre (France), who contests round two of the Sports Car World Endurance Championship WEC in Spa-­Francorchamps for Porsche on the same weekend. In the GTD class, Jörg Bergmeister (Germany) drives a Porsche 911 GT3 R for Park Place Motor-­ sports, with customer teams Alegra Motorsports, CORE Autosports and TRG also fielding their 911 GT3 R.

The 911 RSR is a completely new development and is campaigned by the Porsche GT Team in both the IMSA SportsCar Championship and the Sports Car World Endurance Championship WEC. Depending on the size of the restrictor, the motor, which is now positioned in front of the rear axle, puts out around 510 HP (375 kW). The level of downforce and the aerodynamic efficiency were significantly improved. The 911 GT3 R, mounted with the new ultra-­modern, four-­litre, flat-­six engine with direct fuel injection, was designed by Porsche for worldwide GT3 series on the basis of the 911 GT3 RS production sports car. The 911 GT3 Cup tackles the season with a newly-­developed drive. Thanks to thoroughbred motorsport technology, the compact engine with direct fuel injection delivers a peak performance of 485 HP (357 kW).

The IMSA SportsCar Championship is a sports car race series contested in the USA and Canada, which was run in 2014 for the first time. The series was formed from the merger of the American Le Mans Series and the Grand-­Am Series. Sports prototypes and sports cars start in four different classes: GTLM (GT Le Mans), GTD (GT Daytona), P (Prototype) and PC (Prototype Challenge). The new Porsche 911 RSR runs in the GTLM class, with the Porsche 911 GT3 R contesting the GTD class.