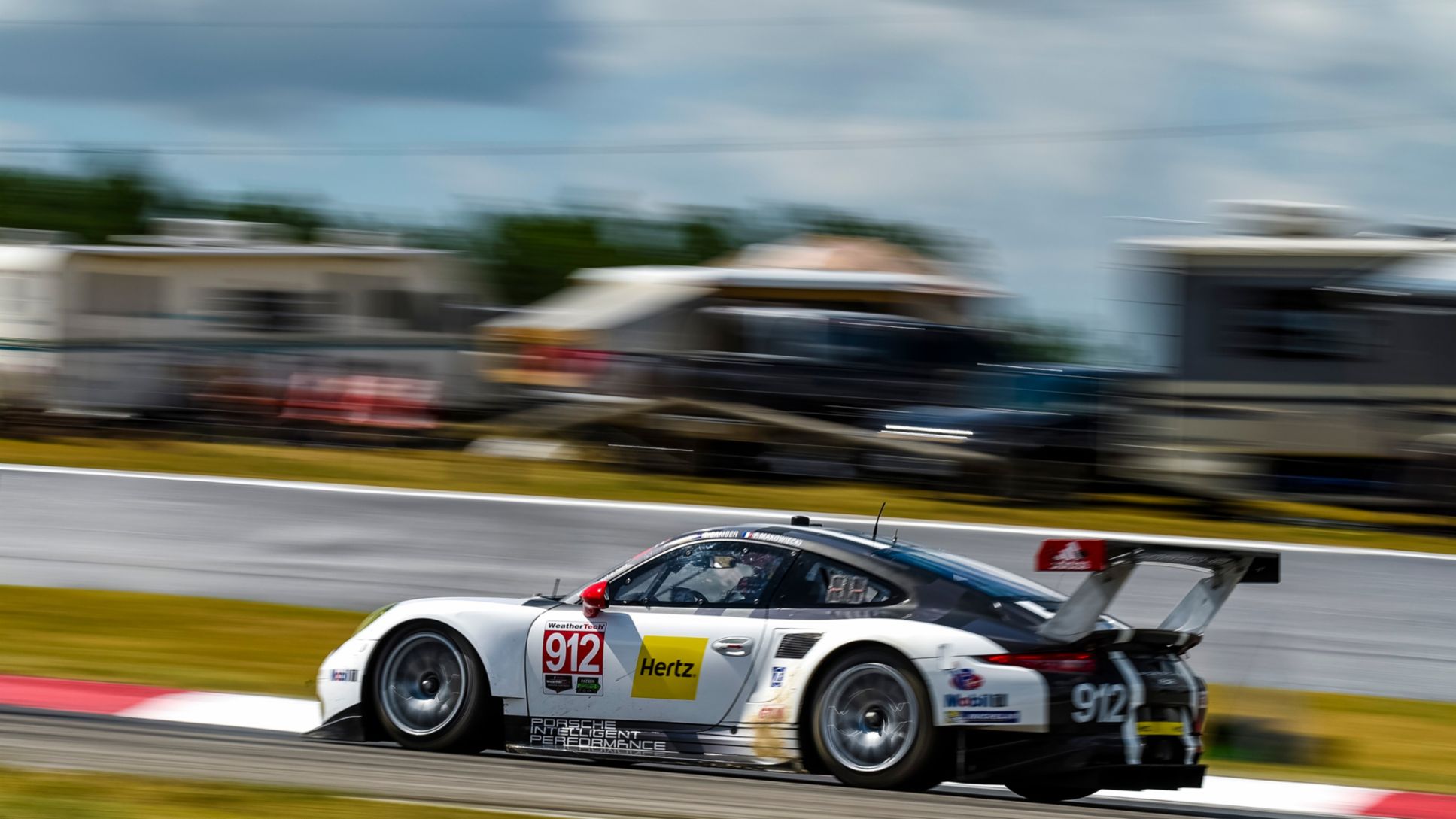 911 RSR to start on the shortest track of the season

On 23 July, round seven of the most important and popular sports car race series on the North American continent, the IMSA WeatherTech SportsCar Championship, takes off on the Lime Rock Park racetrack.

At just 2.414 kilometres, the Lime Rock Park racetrack located in the picturesque rural region in the US state of Connecticut is the shortest on the championship calendar. This marks the first outing for the Porsche North America factory team at Lime Rock Park, with the squad fielding two Porsche 911 RSR in the GTLM class. The racer from Weissach is based on the seventh generation of the iconic 911 sports car and so far this season has won the race at Long Beach. In the GTD class, Porsche customer teams campaign the new 911 GT3 R, the winning car at Laguna Seca.

Fans are more than happy to drive two-and-a-half-hours from New York City to Lime Rock Park to experience the captivating sports cars in the GTLM class for the first time. Awaiting them is a very special motorsport experience: Because there are no grandstands, spectators follow the action from the grassy hills surrounding the racetrack and are well equipped with camping chairs and giant cool boxes. There is a special reason that races at Lime Rock Park are always contested on Saturday: On Sundays a service is held in a church on one of the hills next to the track.

At Lime Rock Park, the reigning IMSA GT Champion Patrick Pilet (France) and Nick Tandy (Great Britain) again share the cockpit of the #911 Porsche 911 RSR, the winning vehicle at Long Beach. Piloting the number 912 vehicle are Earl Bamber (New Zealand) and Frédéric Makowiecki (France). Patrick Pilet competed at Lime Rock years ago, but for his Porsche North America teammates the circuit is totally unfamiliar. However, Jörg Bergmeister (Germany), who contests the GTD class for the Porsche customer team Park Place Motorsports as the fifth works driver, is a seasoned Lime Rock expert. He has won on this racetrack six times, most recently in 2012 with the 911 GT3 RSR. Driving for Seattle/Alex Job Racing is the former Porsche junior Alex Riberas (Spain) and Mario Farnbacher (Germany), the Laguna Seca winners.

The 911 RSR is the most successful GT racing car of recent years. 2016 marks its last season as a works-run racer. Its successor is expected to make its racetrack debut in January 2017 at the Daytona 24-hour race. Porsche built the 911 GT3 R for GT3 series worldwide based on the 911 GT3 RS production sports car. The new customer racer scored its first victory in the IMSA SportsCar Championship at Laguna Seca in May.

Dr Frank-Steffen Walliser, Head of Porsche Motorsport: “After two races in eight days we had a little time to catch our breath. We used this time to prepare as best we can for the race at Lime Rock Park. The results at Watkins Glen and Bowmanville were not exactly what we were hoping for. But in motorsport it’s completely normal to go through phases that are not so successful. For 2016, we only slightly modified the 911 RSR with which we won all GT titles in the USA and the WEC in 2015. This is its last racing season with the factory and its successor is currently being tested on various racetracks. Nevertheless, we have taken a step forward compared to 2015, which was of course smaller than the competition who are fielding entirely new cars this season.”

Patrick Pilet (911 RSR #911): “Lime Rock Park is out in the middle of nature. It’s a little like a go-kart track, short and narrow. Nowhere else do we drive as many laps in one stint as here, if I remember correctly it’s almost 70. That’s unusual. Most of the time the cars are bunched up, but that gives the spectators a particularly exciting show with tough fights for positions. I competed at Lime Rock Park back in 2008 and it was great fun.”

Nick Tandy (911 RSR #911): “I’ve been familiar with this circuit for years, but only from computer games. I’ve never actually driven there. I’ve heard that it’s normally very hot there at this time of the year. That would suit us.”

Earl Bamber (911 RSR #912): “The Lime Rock Park race is new on the calendar, at least for our GTLM class. I always look forward to getting to know new circuits. Basically it’s an oval with a chicane. I’ve had a look at several on-board videos and I can hardly wait to experience the track live with the 911 RSR.”

Frédéric Makowiecki (911 RSR #912): “A new race is always an interesting challenge. But it also means a lot of work for the team, particularly at Lime Rock Park. It’s a two-day event, so instead of the usual three, we have just two practices and the qualifying to setup the 911 RSR for this special circuit. I hope we manage it in such a short time.”

Jörg Bergmeister (911 GT3 R #73): “Lime Rock is always an experience. It seems I can’t do much wrong on this circuit. I’ve competed there seven times, I won six times and finished second once. It can continue like this. The track is very short, almost an oval, and it has everything that’s fun – very fast corners, but also several slow ones where you need good traction. That’s always good for Porsche.”

Mario Farnbacher (911 GT3 R #23): “The track is very short and therefore very demanding. You’re steering constantly and you barely get a chance to relax. From what I know there is very little traction, but that should improve with the 911 GT3 R. As far as the traction is concerned we are certainly in a good position with the new car. I think we have good chances to fight for victory at Lime Rock Park.”