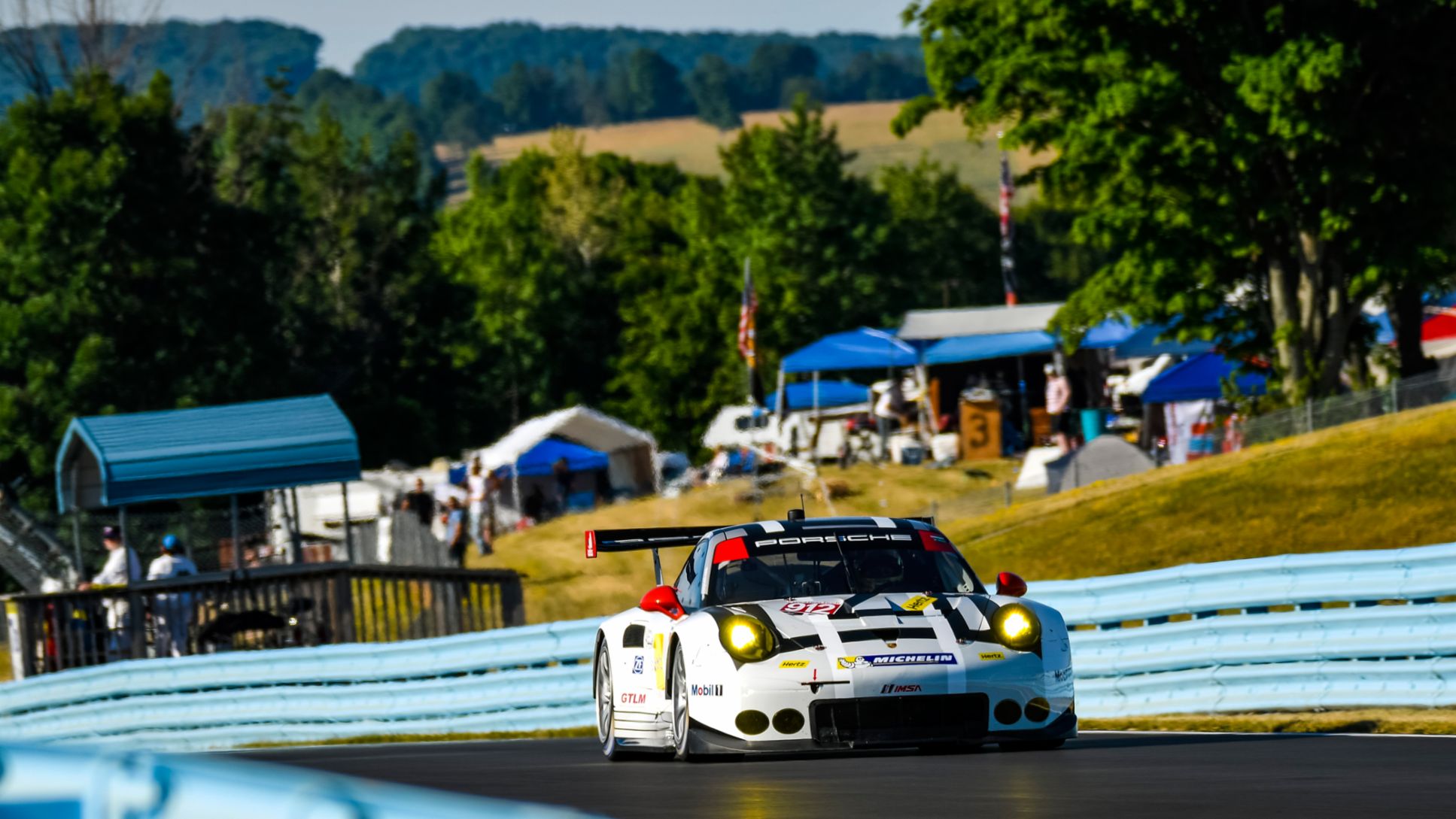 One week after the six-hour race at Watkins Glen, North America’s premier sports car racing series IMSA SportsCar Championship now heads to Bowmanville not far from the metropolis of Toronto on 10 July for the only race in Canada.

The Porsche North America factory squad tackles the race in the Canadian Tire Motorsport Park as the defending champions with two Porsche 911 RSR. The 470 hp racer based on the seventh generation of the iconic 911 sports car contests the GTLM class – which with five automobile manufacturers has the strongest support.

The first sports car race on the previous Mosport International Raceway, Canada’s oldest racetrack, was contested in 1961. Stirling Moss won the inaugural race in a Lotus 19. The Canadian Formula 1 Grands Prix were held here on the storied 3.957 kilometre circuit from 1967 to 1977. In the races of the American Le Mans Series and its successor series the IMSA SportsCar Championship, Porsche has celebrated a total of eight GT victories since 1999 – four of which were achieved by Jörg Bergmeister.

For 2016, the 911 RSR not only received a new factory design, but also underwent modifications to the aerodynamics to comply with the new regulations. The position of the rear wing was moved further to the back, with the rear diffuser now considerably larger. The 911 GT3 R was built by Porsche for worldwide GT3 racing series based on the 911 GT3 RS production sports car. In January 2016, it celebrated its racing debut at Daytona mounted with the new, ultra-modern, four-litre flat-six engine with direct fuel injection (output: 500 hp). The racer scored its first victory in the IMSA SportsCar Championship at Laguna Seca.

The race in the Canadian Tire Motorsport Park takes off on Sunday, 10 July, at 11.05 hours local time (17.05 hours CEST) and runs over 2.40 hours. It is broadcast live outside the USA on www.imsa.com.

Steffen Höllwarth, Program Manager IMSA SportsCar Championship: “After Watkins Glen we only have a few days to prepare for the race in Canada. We will use this time to prepare ourselves as much as possible for the very fast and demanding circuit. Last year we won in the Canadian Tire Motorsport Park. But it will be very difficult to repeat this result.”

Patrick Pilet (911 RSR #911): “We’re looking forward to this racetrack. Our victory here in 2015 marked the start of a series of successes which ultimately led to Porsche, our team and me winning the titles. The track is definitely one of the fastest in the world. It’s very bumpy and there are virtually no run-off zones. That makes it difficult. But our 911 RSR performed very well there last year, hence we’re taking up this challenge feeling very confident. Victory on such an extraordinary circuit is really something major, quite simply because you need a lot of courage to win here.”

Nick Tandy (911 RSR #911): “The Canadian Tire Motorsport Park is my all-time favourite racetrack in North America. Last year we won the race from pole position, so it’s great turf for Porsche. The special thing about this track is that just about every corner flows into the next one without any straights in between. That poses a very special challenge and differentiates this fast circuit from most others. When the corners merge together rather than just a corner followed by a straight, it’s the driver who makes more of a difference. I like such challenges.”

Earl Bamber (911 RSR #912): “I think it’s great to contest another race just a week after Watkins Glen – and on such a fascinating and traditional racetrack. The only Canadian round of the IMSA SportsCar Championship is one of the highlights of the season for me. For us the fight for the title continues in the Canadian Tire Motorsport Park. We’re only halfway through the season – and there are still many opportunities for us to earn important championship points.”

Frédéric Makowiecki (911 RSR #912): “This will be a completely new experience for me. I’ve actually never driven on this racetrack. I’ve heard from my teammates that it’s very demanding and above all very fast. I’m really excited and can hardly wait to drive the 911 RSR there. Of course it would be wonderful if we could repeat last year’s victory for Porsche. But that will undoubtedly be a tough fight.”

Jörg Bergmeister (911 GT3 R #73): “The former Mosport International Raceway is a very special track, ultra-quick with relatively few run-off zones. It’s huge fun to drive here but you have to use your head and always know what you’re doing. This circuit is merciless if you make even the smallest mistake. Turn 2 is critical. You come over a crest and if you brake too late you can quickly end up in a wall of tyres.”