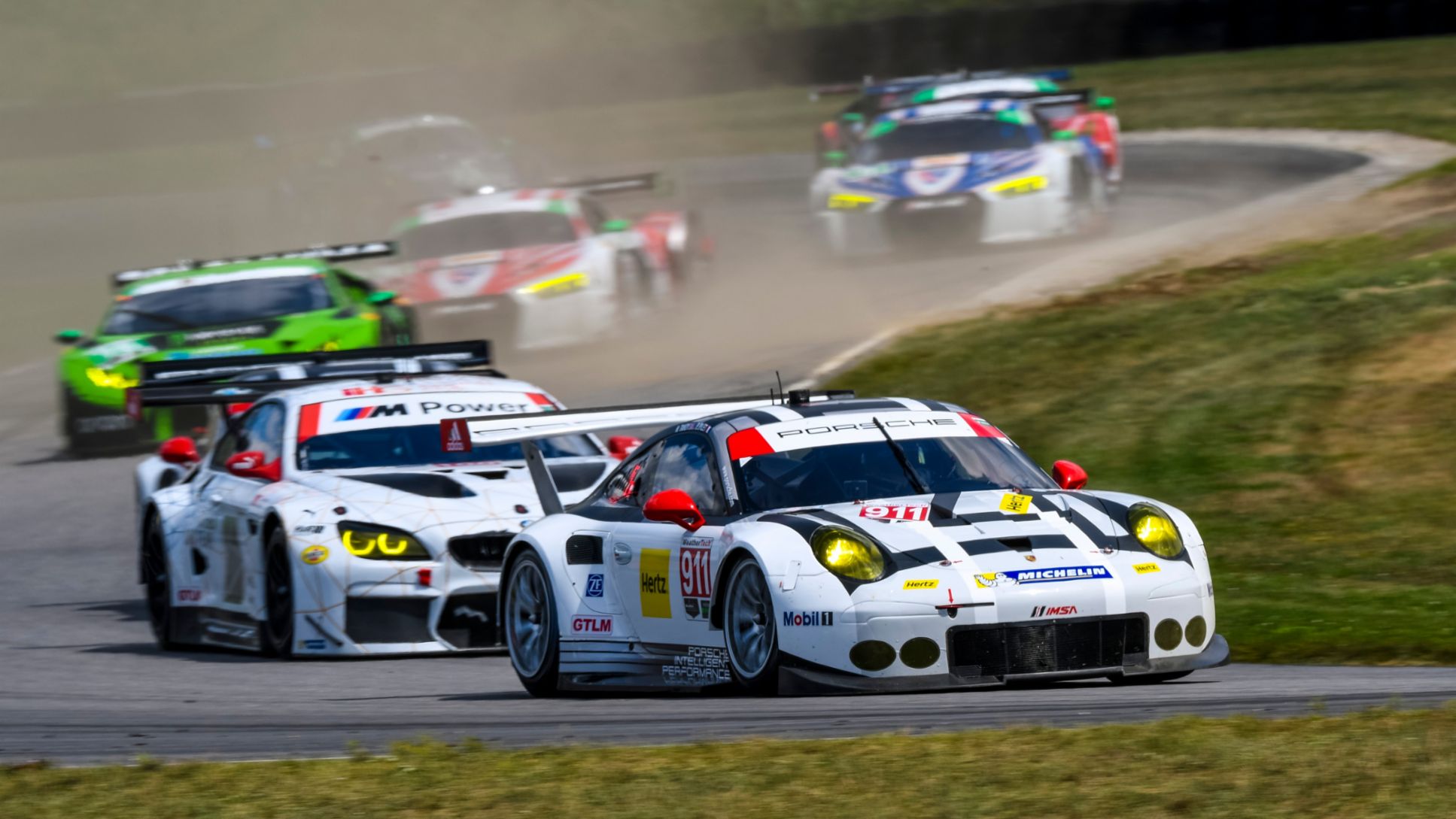 On the legendary Road America circuit, one of the oldest and most demanding race-tracks in the USA, the eighth round of the IMSA SportsCar Championship will be contested.

The Porsche North America factory squad fields two Porsche 911 RSR in the GTLM class against strong opposition from BMW, Ferrari, Ford and Chevrolet on the storied circuit close to Elkhart Lake in the US state of Wisconsin. The winning racer from Weissach is based on the seventh generation of the iconic 911 sports car. Equally as fierce is the competition in the GTD class in which Porsche customer teams such as Alex Job Racing and Park Place Motorsports campaign the new Porsche 911 GT3 R.

The cradle of sports car racing in the USA is close to Elkhart Lake, two hours’ drive north of Chicago. Opened in 1955, Road America is one of the oldest racetracks in the United States and one of the few circuits to have retained its original layout. The 6.514-kilometre track with its long final straight and 14 corners lies halfway between Milwaukee and Green Bay on Highway 67. A newspaper once aptly described Road America as “America’s National Park of Speed”.

The defending IMSA GT champion Patrick Pilet (France) and Nick Tandy (Great Britain) return to Elkhart Lake as last year’s winners. The pair shares the #911 Porsche 911 RSR with which they won the Long Beach street race earlier this year. Their team colleagues in the sister 911 RSR run by Porsche North America (No. 912) are Earl Bamber (New Zealand), who finished second there last year after starting from pole position, as well as Frédéric Makowiecki (France).

One of the most successful GT pilots at Road America is Jörg Bergmeister (Germany) who contests the GTD class for the Porsche customer team Park Place Motorsports as the fifth works driver. He has notched up no less than five victories on this racetrack. Porsche Junior Sven Müller (Germany), the current leader of the Porsche Carrera Cup Deutschland and the Porsche Mobil 1 Supercup, contests for Black Swan Racing. Competing for the Seattle/Alex Job Racing squad is the former Porsche junior Alex Riberas (Spain) and Mario Farnbacher (Germany).

The 911 RSR is the most successful GT racing car of recent years. After securing victories at the long distance classics in Le Mans, Daytona, Sebring and Petit Le Mans, 2016 marks its last season as a works-run racer. Its successor is expected to make its racetrack debut in January 2017 at the Daytona 24-hour race. Porsche built the Porsche 911 GT3 R for GT3 series worldwide based on the 911 GT3 RS production sports car. The new customer racer scored its first victory in the IMSA SportsCar Championship at Laguna Seca in May.

Dr Frank-Steffen Walliser, Head of Porsche Motorsport: “The Road America race is a real classic. Our drivers are looking forward to competing on this fast, demanding track. As part of our preparations we have tried to build on the progress we made at the last race at Lime Rock Park. At that round we were in the position to fight for a top spot. Despite the limited time, the team will do everything so that our drivers again have the best possible chances at Road America. Their recent defeat below their true potential can be attributed to various reasons. We will all be working hard to change that.”

Patrick Pilet (911 RSR #911): “Road America is a little like Spa, fast and challenging. It’s a racetrack with loads of character. Last year we had a great race there, where we came from the very back of the field to win. You don’t experience that every day. I hope we can secure a better grid spot this time – we were very happy with the race result. To win at Road America you need the best package of car, driver and team. Only then do you have a chance on this circuit.”

Nick Tandy (911 RSR #911): “I have great memories of Road America. Last year we started from the very last grid spot after experiencing a problem in qualifying and we won – I’ll never forget the feeling of overtaking the entire GT field in the 911 RSR. Road America is one of the most traditional racetracks in the USA. It’s a piece of American sports car history and it’s always great fun competing there.”

Earl Bamber (911 RSR #912): “Road America is one of my favourite racetracks in America. Last year I secured pole position with the 911 RSR and obviously I’m hoping that we can deliver another strong performance again this time. We went testing there a while ago and worked on a baseline setup for the 911 RSR. Hopefully we can benefit from this.”

Frédéric Makowiecki (911 RSR #912): “This is another American racetrack on which I’ve never competed. I’m looking forward to this new experience. Road America is one of very few old circuits left in the USA and hence it is steeped in tradition. It’s an exciting challenge for every driver. After things haven’t gone so well for us recently I’m hoping that our team’s hard work will be rewarded and that we regain a little of our old strength at Road America.”

Jörg Bergmeister (911 GT3 R #73): “There’s no other circuit I look forward to more than Road America. It’s a classic racetrack that has everything a driver could wish for – it’s very fast, very hilly and very challenging. No wonder that sports car fans travel from far and wide to witness this race. Road America is my all-time favourite in the USA, and that’s not just because I’ve celebrated many successes there with Porsche.”

Mario Farnbacher (911 GT3 R #23): “What I enjoy most about the IMSA SportsCar Championship are the great racetracks. They’re not boring Grand Prix circuits, but real drivers’ racetracks that are challenging and fun. I think Road America stands at the top of the list.”

Alex Riberas (911 GT3 R #23): “As far as top speed is concerned, this is probably the fastest racetrack on the IMSA SportsCar Championship calendar. It’s challenging and huge fun.”